An artist of radical doubt: the Met Breuer hosts a retrospective. 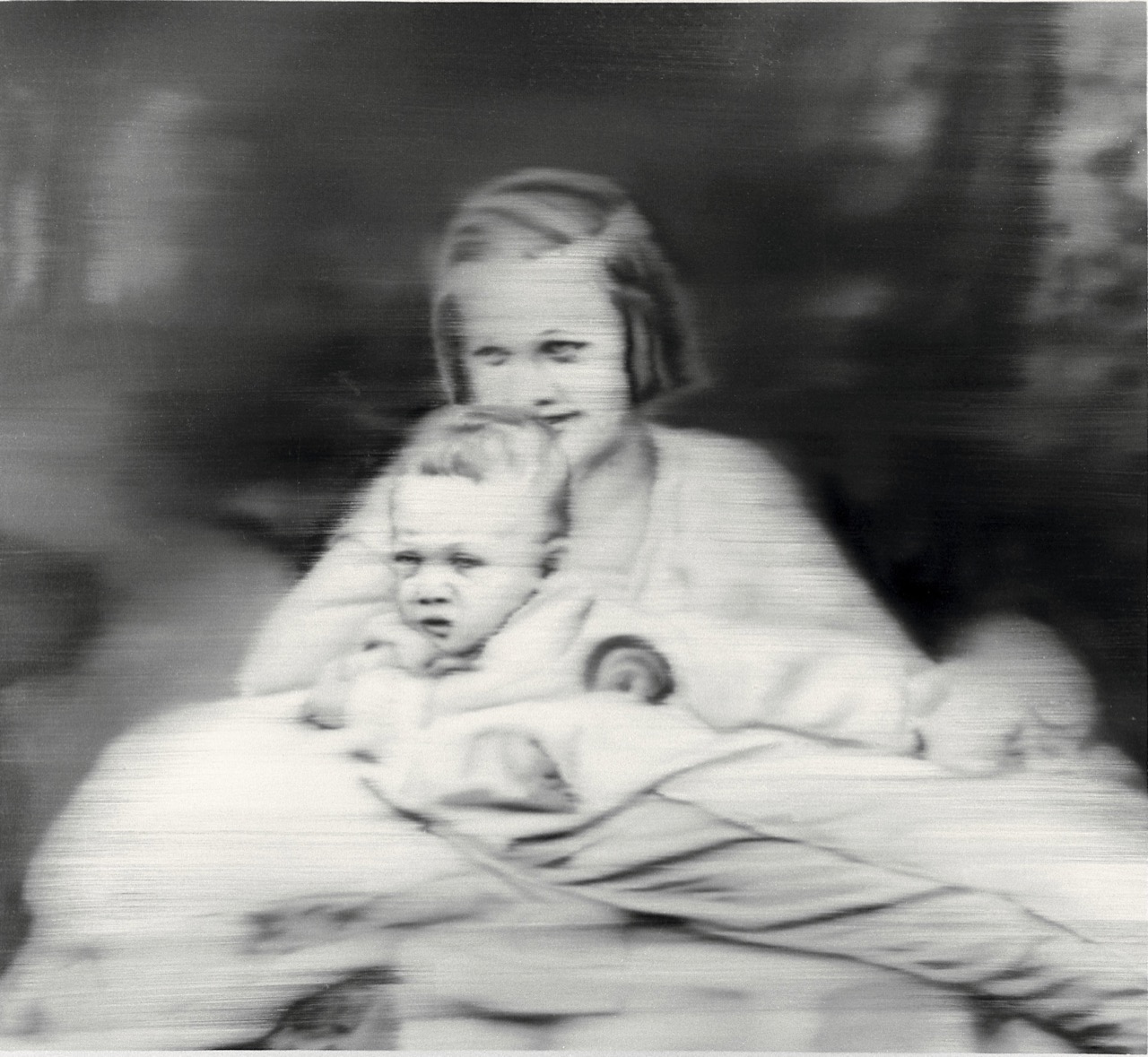 Editor’s note: As of this writing, the Met Breuer is temporarily closed to the public due to COVID-19 concerns. A virtual exhibition guide is available on the museum’s website.

•   •   •
After a four-year run, the Met Breuer is closing its doors on an elegiac note: indeed, Gerhard Richter: Painting After All, curated by the museum’s Sheena Wagstaff and art historian Benjamin H. D. Buchloh, may induce feelings of vertigo, wistfulness, and retrospection. The very idea of a monographic Richter exhibition might strike some as paradoxical given that the artist, perhaps more than most, has expunged any idea of unity from his practice, which has ranged from figuration to straight abstraction. He has motifs and methods but no style—he is a man without qualities—and yet painting has remained a central term throughout his career. I kept returning to the exhibition title as I walked through the museum galleries. Painting After All. Does that mean that painting is triumphant? Painting über alles? Or does it cut in the other direction, suggesting that painting is not to be taken too seriously? Or perhaps it’s that painting—its death perpetually announced—only survives as a relic, some long-lost message tossed to sea. It’s about as difficult a phrase to understand as figuring out what painting means today. 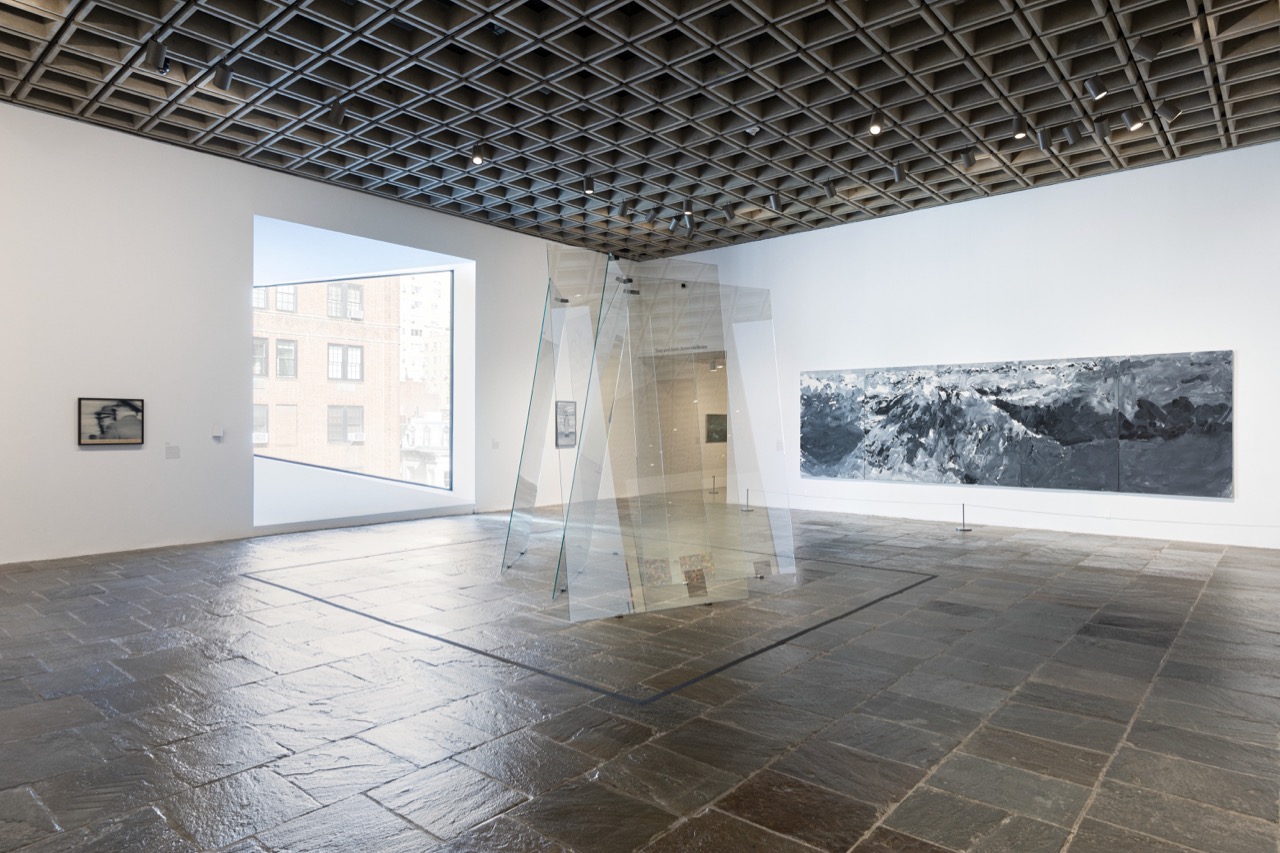 Where to begin? The exhibition is hung in roughly chronological fashion with interruptions, clusters, restarts, and pocket shows within. When an artist has been painting for over fifty years, a two-floor retrospective might not be enough, and the word survey doesn’t feel quite right for this outing: many of Richter’s touchstones do not appear. (My memory of Richter’s last New York retrospective, at the Museum of Modern Art in 2002, is that it was everything all at once: abstract paintings, portrait paintings, landscape paintings, history paintings—an entire museum within a museum.) In many ways, the exhibition takes the form of a conversation, jumping from topic to topic, theme to theme. For the past forty or so years, Buchloh has been Richter’s primary interlocutor; his numerous interviews and essays are in need of collection. Much of Buchloh’s scholarly work focuses on Constructivists and Conceptualists, with Richter the odd painter in the bunch. By certain rubrics, one might call the artist conservative. He insists on the impossibility of shaking off tradition while at the same time doggedly trying to empty it out. Adorno’s claim that to write lyric poetry after Auschwitz is barbaric haunts Richter, too, and yet he continues to paint in this condition of aftermath. 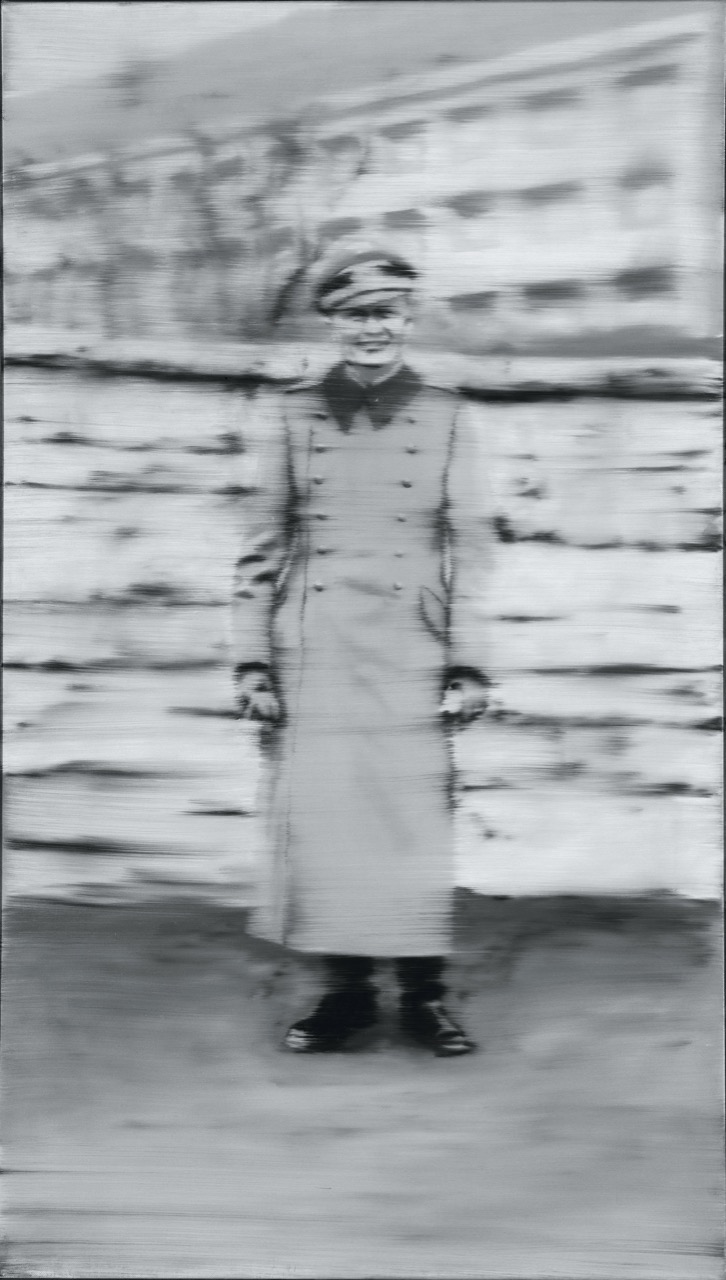 Many of the earliest works in the exhibition face the question of the Holocaust from an oblique angle, which was perhaps the only tack a German artist could take after the war. One example is Uncle Rudi (1965), a diminutive painting based on a black-and-white snapshot of Richter’s uncle, smiling benignly in his Wehrmacht uniform. At the beginning of his career, Richter often started with what was closest to him, whether that meant family photographs, advertisements, or pornography, but intimacy and alienation often trade places in his work: atrocities infect even his most mundane images. This is the case, too, for Aunt Marianne (1965), an almost cloyingly bourgeois picture until one learns that it depicts Richter’s aunt who—deemed schizophrenic—was murdered by the National Socialist machine. Aunt Marianne is also a stealth self-portrait: the artist appears as the worried child in the lap of his adoring aunt. In Uncle and Aunt, then, we see both perpetrators and victims forming the artist’s identity, but also how photography haunts and occasions the very possibility of his painting. 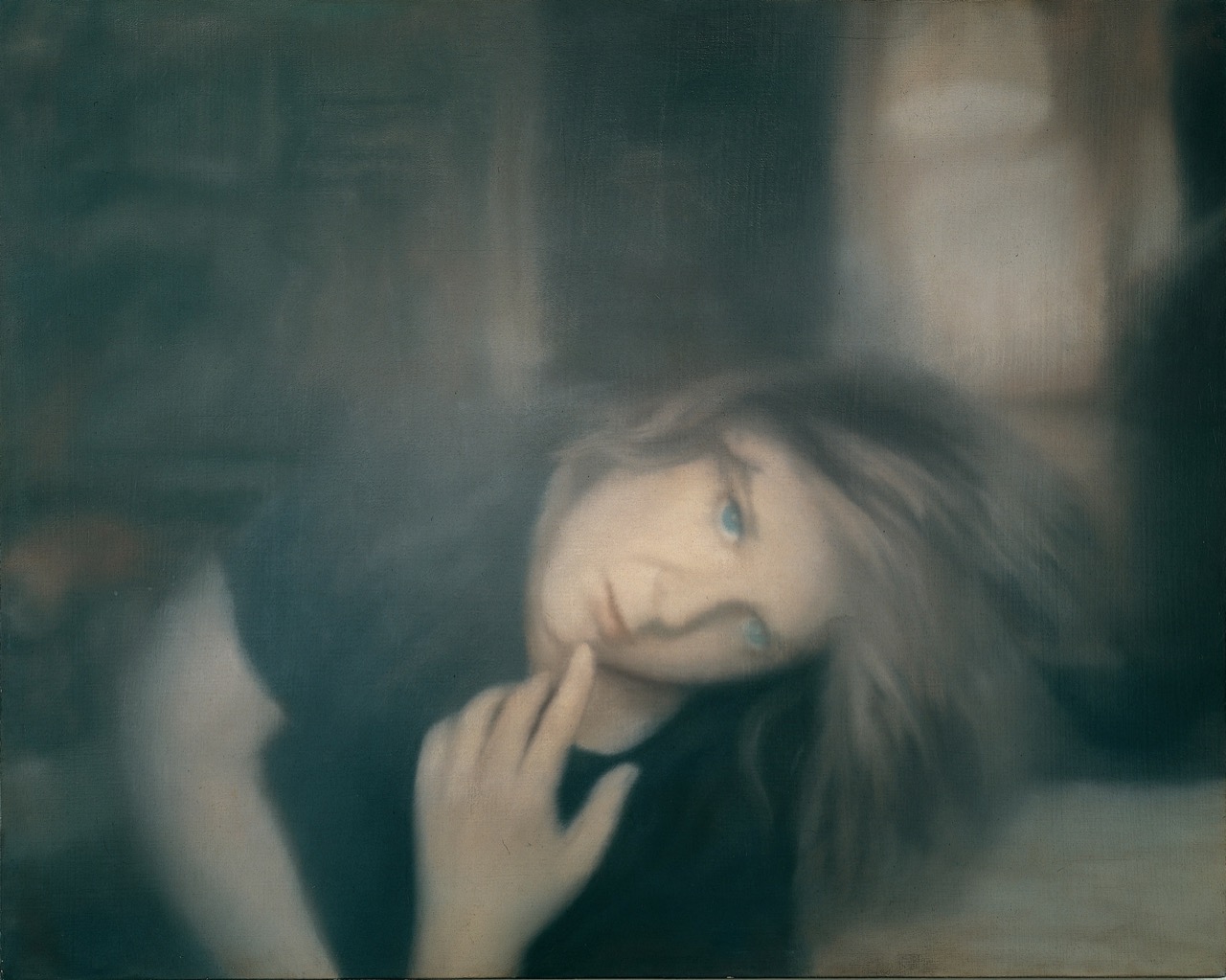 Uncle Rudi and Aunt Marianne are featured in textbooks of postwar art, but what struck me equally were the show’s outliers and misfits, the subjects that do not conform to Richter’s grand themes of history, memory, and tradition. A large canvas from 1971 depicts Brigid Polk—artist, speed freak, and denizen of Warhol’s Factory—in something approaching a state of grace: blond hair flung to the side, eyes beaming blue, her pointer finger drawn decisively to her chin. There is also a pair of portraits (both 1975) picturing the British artists Gilbert and George, wry performers whose art is about as far from the icy pathos of Richter’s as one can get. (The paintings themselves are strange composites: each is a double portrait, with two views painted from opposing orientations—duck/rabbits of droll men.) What intrigued me about these works is not simply what they tell us about Richter’s milieu, but, more broadly, how they insist on the necessity of artistic community to any work’s formation. 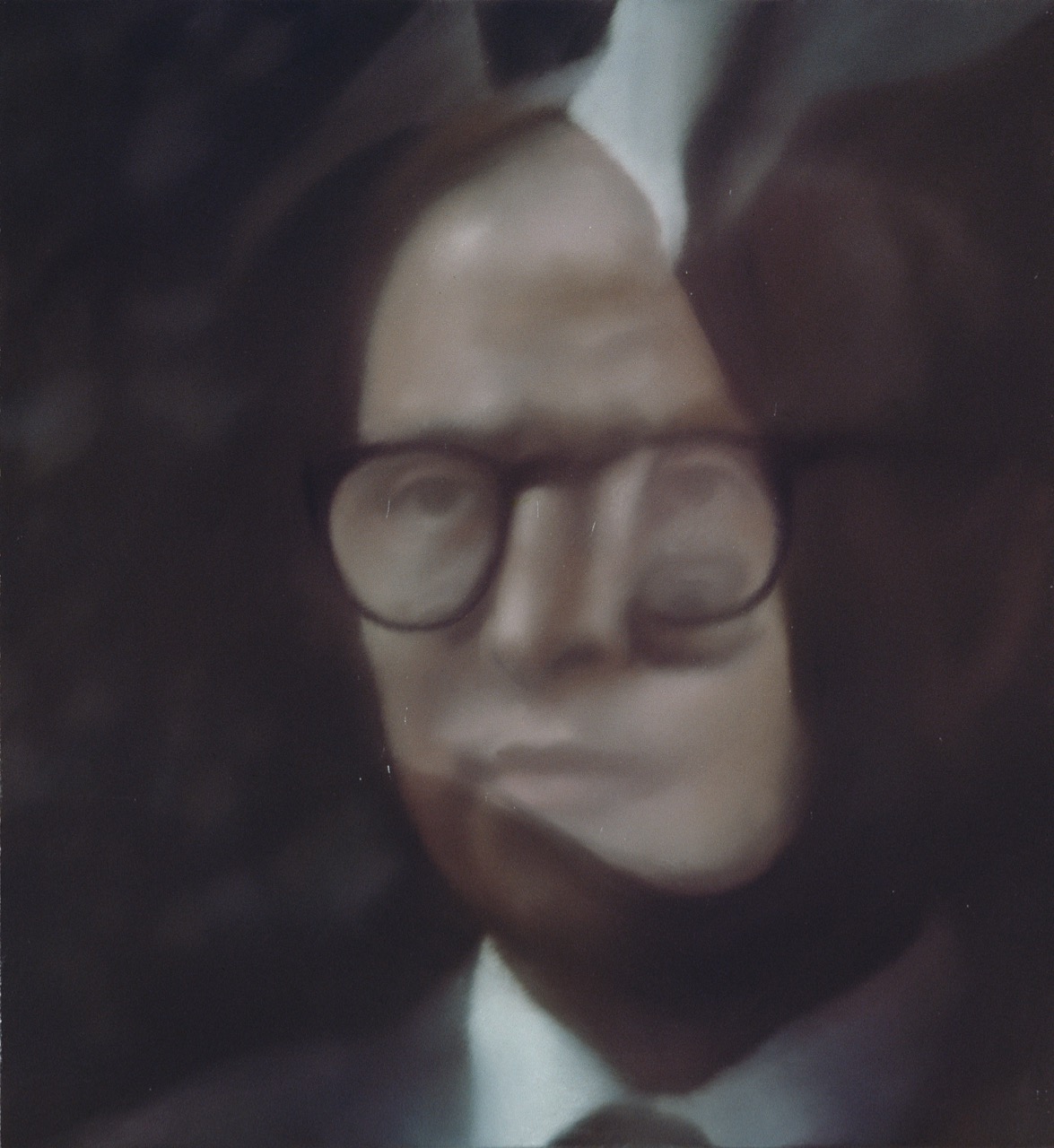 Not everything is world history, in other words, but Richter often seems compelled to enter this space. More and more his work has assumed an epic scale, which is perhaps the lot of “Germany’s greatest living painter.” The show features three giant series of recent abstractions, two of which have never been seen in the United States until now—Forest (2005), Cage (2006), and Birkenau (2014). All of these paintings turn on a similar technique: after layering paint on canvas, Richter pulls a massive squeegee across the surface, leaving behind striated, streaky chroma (a child in the gallery referred to them as “broken screens”). Birkenau is the most striking series of the three, which is due, at least in part, to the nature of its display. The four massive paintings share one wall in a chapel-like space at the Met Breuer. On the opposite wall hang four full-scale reproductions of the paintings, each divided into four quadrants, while the back wall holds a massive gray mirror (Grey Mirror [Four Parts], 2018). 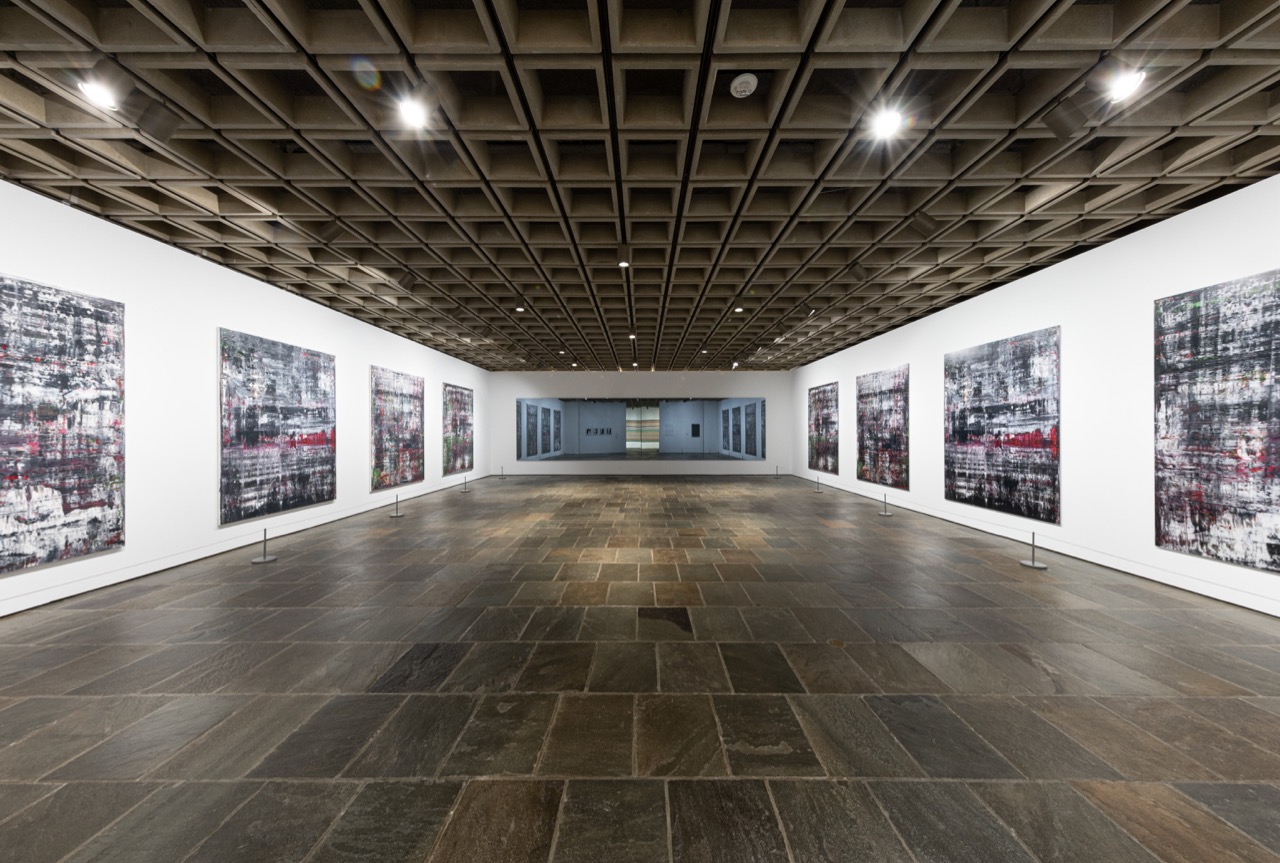 Richter began these paintings after an encounter with the only known photographs taken of the atrocities in the Birkenau camp, clandestinely shot by a prisoner. Shadowy and off-kilter, their horror is unmistakable—one depicts bodies burning in open air—though they are also hermetic and oblique: another presents only a haunting latticework of tree branches. Significantly, Richter includes these source photographs in the gallery as a preface to his paintings, and it is remarkable how much of the paintings’ power derives from witnessing the photographs. This is the only instance in the exhibition when the artist tips his hand, and though the finished works share something of the photographs’ eerie quality, Richter makes clear that likeness alone did not motivate his decision to reveal his starting point: painting cannot stand on its own when faced with such events. How one makes use of the past remains a crucial topic for contemporary art. Where Dana Schutz’s 2016 painting Open Casket examined a photograph of Emmett Till’s brutalized body only to liquidate its horror (this, despite its heroic ambitions), Richter’s Birkenau insists on painting’s failure to communicate atrocity. And yet he can’t stop scratching its surface. It might still have something to contribute, even if only as a process of “working through.” 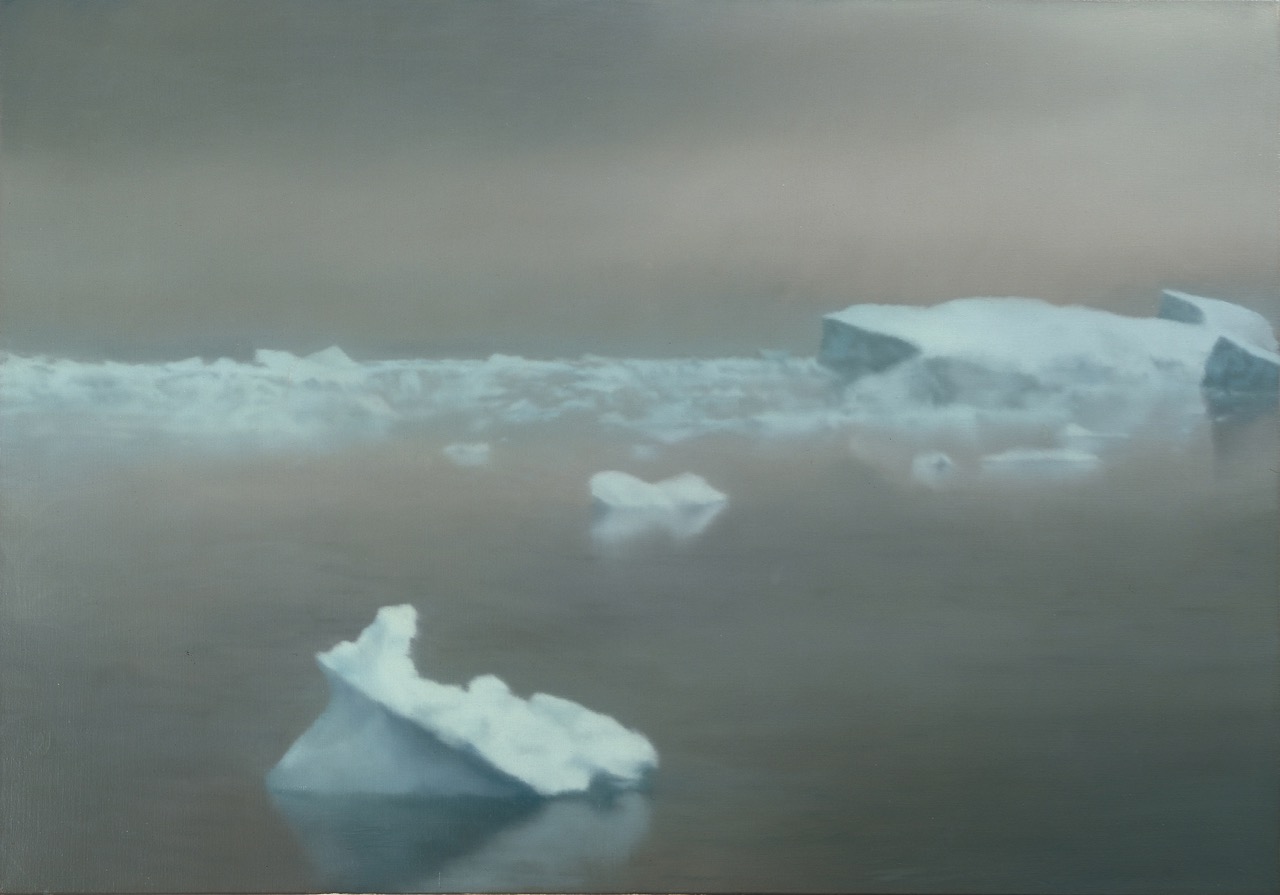 As you might have guessed, there is a Beckettian quality to Richter (“You must go on. I can’t go on”), and my sense is that many insiders, having decided that he belongs to a past age, are weary of a Richter retrospective today. (“Any institution that isn’t on the bus now—i.e., any place working on an Olafur Eliasson and a Gerhard Richter show simultaneously . . . —better hop on quick, while they can still trot along,” curator Helen Molesworth warned in a recent Artforum.) Certainly, one might wonder about the relevance of revisiting a white male European painter at a moment when so many historically underrepresented artists are making claims on the medium. That said, Richter’s entire practice of painting has been premised on self-questioning and radical doubt. Is painting what we need now? Is this all we can do? Is tradition a gift or a curse? These are Richter’s questions, and they should be ours today, too. The artist’s depictions of canonical themes—Romantic icebergs and melancholic mother-and-childs among them—go in and out of focus. To see so many paintings of ice and snow after a winter with little of either reminds us that seasons, like our own subject positions, are on the brink of massive change. After all will come something else.