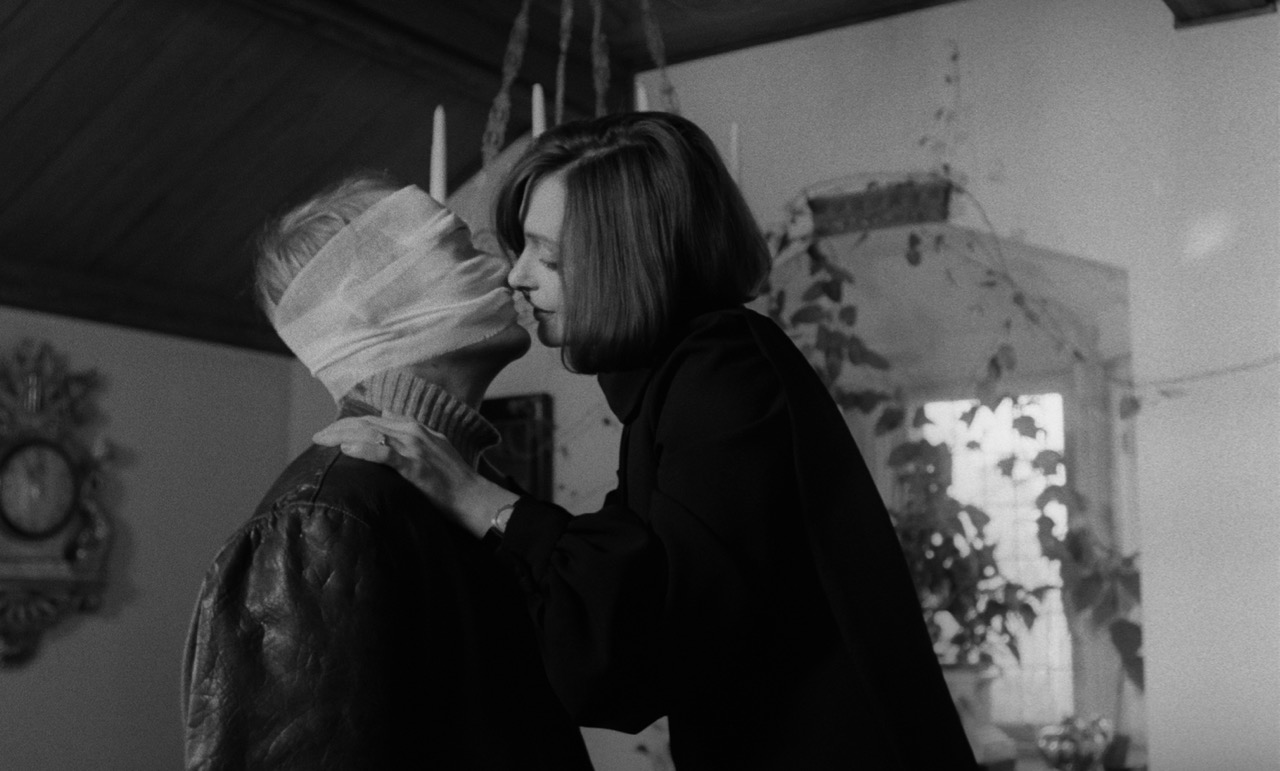 Susan Sontag’s first film, Duet for Cannibals (1969), begins with the sound of repeated knocking or hammering, like the Commendatore in Mozart’s Don Giovanni, announcing with Mephistophelian ardor his return to the scene of Faustian libertinage. Sontag knocks on cinema’s door: she wants to spank cinema but also to be granted admission to its fecundating chamber.

Note the dark round nipples of actor Gösta Ekman, young susceptible man, symbol of Sontag’s own wish to lie supine at Thomas Mann’s (or High Art’s) altar, to be the Aspern Papers thief-acolyte, sucking up to the star. Entranced, SS was, by servitude, but also by mastering the scene of service, and thereby becoming the One serviced: she records, in an opening scene, the ephebe-star shaving, in a cameo of male preening reminiscent of Warhol’s My Hustler (1965), Paul America slowly and exhibitionistically shaving for the mirror and for the camera and for a nascent underground audience that seeks to constitute its liberty by attending films wherein men give a frontal nudity that arty cinema usually requires first of its women. That’s a long way of saying that Gösta Ekman, who plays Tomas in Duet for Cannibals, takes off his pants and underwear for the camera, and Sontag doesn’t stint in letting us see the whole. No intercourse-thrusts; instead, the guys (notably Lars Ekborg, the older, sinister Dr. Bauer, the Aschenbach to Ekman’s Tadzio) appear to go down on the women. 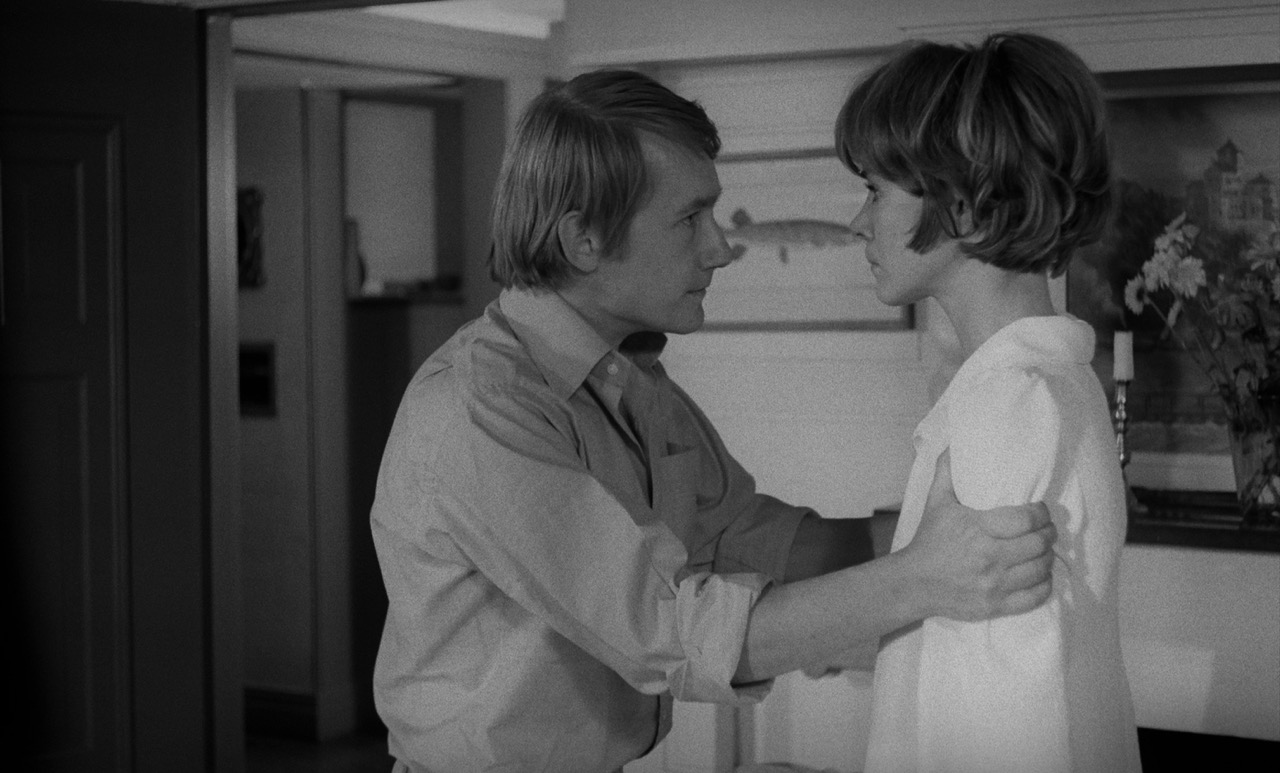 Every relationship in Duet for Cannibals reaches sexual consummation, except the relation between the two principal male characters—the Brechtian intellectual Dr. Bauer, and Tomas, the ephebe in ribbed turtleneck and butt-hugging pale jeans. However interested Sontag was in the lives and practices of male homosexuals, she wouldn’t show her mutually enamored male characters actually making out together. Nor need she have shown us their entwined nude bodies. Nor need she have shown us even a simple kiss between them. She doesn’t owe us anything; she doesn’t need to apologize. 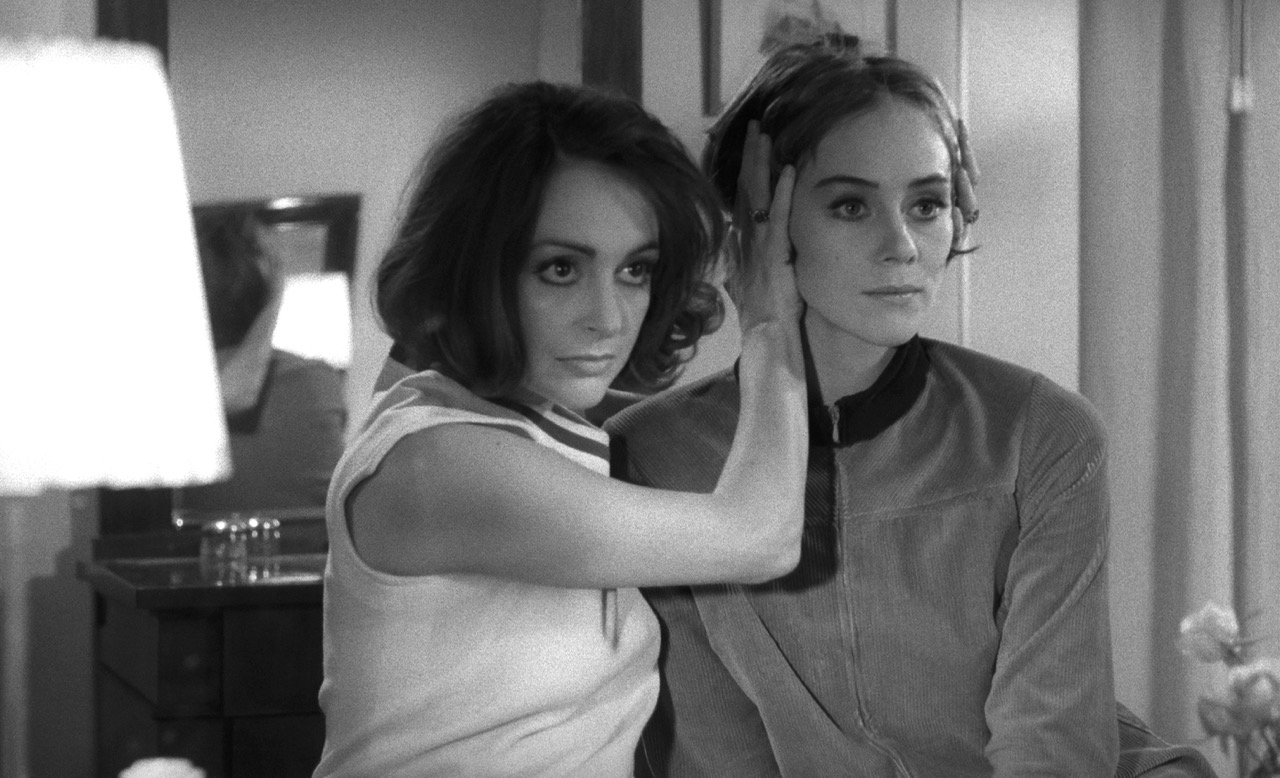 Adriana Asti at moments in Duet for Cannibals looks like a slim brunette version of Anita Ekberg in La Dolce Vita (1960); but at other moments, Asti looks like Jane Fonda or Carol Burnett in their late 1960s guises. 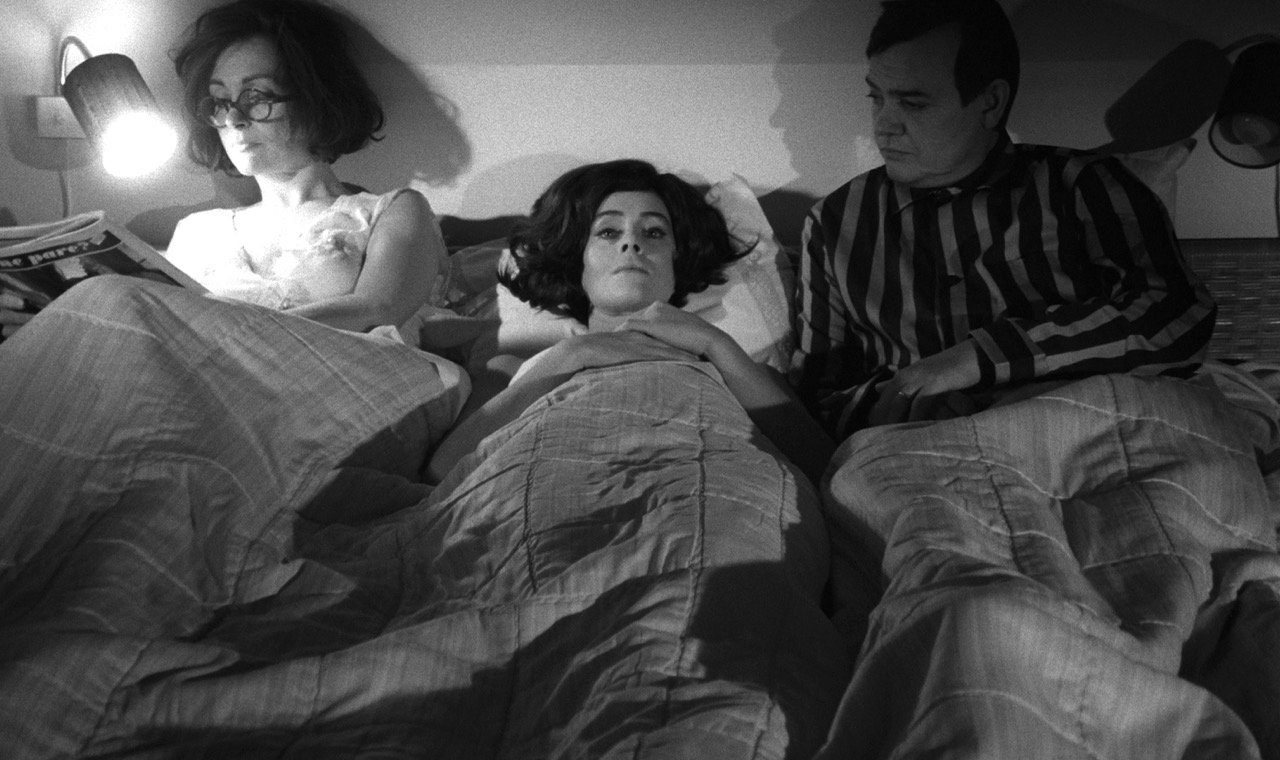 Torturing the wife or girlfriend seemed to have been a frequent sport in European art cinema of the 1960s and ’70s, even when the directors were progressive, queer, or female. I’m thinking of Fassinder’s Martha (1974), where Karlheinz Böhm does a number on the extravagantly masochistic Margit Carstensen. Putting up with a husband’s terrorism is a sign of a great female performance, whether in noir films, Hollywood “women’s pictures,” or art-house intellectual dramas. The imperious Dr. Bauer slaps Francesca at least once in Duet for Cannibals. Those slaps engineer musicality: the slaps, like the knocking or hammering that we hear overlaying the motionless opening title shot, are sonic islands, interrupting the film’s tendency to proceed without music. Suddenly a snatch of music does appear: a phrase from Wagner’s Parsifal? And then the music stops. Slap, slap. Knock, knock.

The dour Dr. Bauer wolfs down his food and then (while his wife and Tomas, his male secretary, remain at the table) rushes off-screen to the lavatory to vomit. His loud, baroque retching we must add to the list of Duet for Cannibals’ musical moments, interruptive punctuation points. Dr. Bauer’s puking may be the most intellectually generous moment of regurgitation in the history of cinema. His puking gives us the neatest answer to the question raised by the film’s title: How does sexual and intellectual voraciousness—and ethical voraciousness, for that matter (the ostentatious desire to do good works, to stop being selfish and merely “aesthetic”)—how does a quintessentially Sontagian voracity (deemed cannibalistic by her own ironic title) create music, duet; and how might this hunger to be intellectually supreme also backfire into self-loss, knowledge-depletion, purge?

I want to collect books and to know everything and to be Faust while also having the supervisory powers of Mephistopheles—the power to wreak vengeance on those louts who sexually rejected me. I want to be the slapped wife who oversees her husband’s murder. I want to be the wife who taunts her impotent puking husband. I want to be the sleek-assed male secretary shaving in front of Sontag’s camera. I want to write The Magic Mountain and star in La Dolce Vita. I want to be the brooding artificer of The Seventh Seal and They Drive by Night.

That Sontag took it upon herself to make a superbly secco film without asking permission from the University of Chicago, Harvard University, Lionel Trilling, or Plato—can this bold gesture of Sontag’s, even if the film she created seems less a document of libidinal and emotive fulfillment than a record of the impediments that barred Sontag’s entrance to the kingdom of earthly happiness—can this bold gesture of Sontag’s (I almost typed “Stonewall” instead of “Sontag”) serve as my model for artistic bravery and jouissance? Can Duet for Cannibals be my new Jane Eyre, proof-text of claiming a voice even if it means you must burn down the house? Style yourself Bertha Rochester Sontag Eyre, who can torch the master’s mansion to write the insurgent, cannibalistic body. As Bertha and Jane sang a duet within the body of Charlotte Brontë, so literature and cinema, those sob sisters, sang a duet within the body of Susan Sontag. 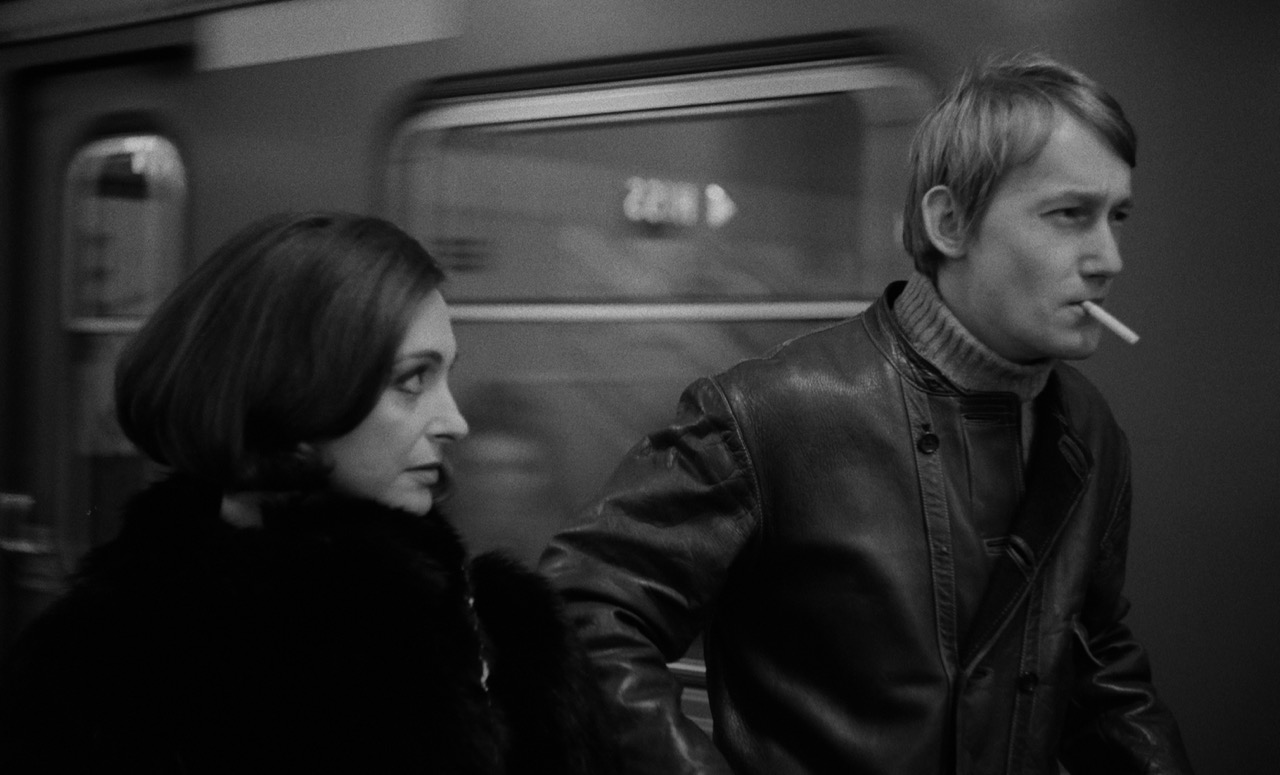 Two books we see on shelves in Duet for Cannibals: Collusion Course and The Spanish Civil War. Civil war is a duet; so are conspiracy and complicity. The Cold War was a duet for cannibals. When countries can’t cooperate to stop ecocide, we are hearing a duet for cannibals, which happens also to be the name of a Martin Margiela fashion collection from 2019. MM is paying attention to SS. Collusion course. Odd, how close the word “cannibal” is to “cannabis.” We drop out of literature and drop into cinema’s cannabis; we smoke the Arriflex of paradise. We make ourselves a classic by finding Mozartean resonances (La Ronde meets Le Nozze di Figaro) within conspicuous (cannibalistic) cultural consumption. I’m not criticizing Sontag’s voracity; I worship it, and wish to model my own appetites after hers. I’m simply noting that she comically portrays appetite, in this film, as cannibalistic, grotesque, and abusive. Furthermore, because this film is her first, Duet for Cannibals becomes a symbol for Sontag’s entrance into cinema. The film is “about” her initiation into filmmaking, and her construction of what it means to transgress the boundaries between media and vocations (cinema/literature); she interprets that transgression as an act of cannibalism, translated into symmetrical neoclassical badinage in order to make it filmable, palatable, clean. The path of Artaud—being cannibalized by internal demons, succubi, imaginary daughters—would not be Sontag’s, though Duet for Cannibals teaches us how the Artaudian scene of autophagy (being eaten by one’s own capacity for inspiration) can echo an incestuous overpopulated household’s flirty ménage à quatre. Beethoven called it a quartet. The film ends with a snippet of Dvořák. We see, mid-film, a graffiti-marked subway wall; among the names inscribed are Brecht, Sartre, Einstein, Simone de Beauvoir, Virginia Woolf. And Sappho, spelled “Sapfo.” Call Sontag’s caméra-stylo Sapphic; its nib produces not excess or flow, but stark syntagms, woman-woman kennings, truncated epithets wherein chiaroscuro is created by slap and Dvořák and puke and dictaphone, by Band-Aid on the face of a man who cuts his face while shaving, by husband who shuts himself in a closet (literally!), by too many cigarettes (Tomas, whom Frederic Tuten, reviewing the film for Vogue in 1969, described as an “earnest student revolutionary,” is a chain-smoker and hence a cougher), by leather jacket on student revolutionary, and by “all quotations are bad” (pace Walter Benjamin). Yes, says the enigmatically demure Ingrid, Tomas’s girlfriend (played by Agneta Ekmanner), quoting a fictive author quoting Ho Chi Minh, “all quotations are bad.” No quotations, Sontag knew, were bad. To enter the sanctum, filthy or clean, of a new art form, as Sontag entered cinema, is to gorge oneself on gristly quotations, mouthful after mouthful of meat fat, the grease of prior human endeavors, a grease we call culture.

Wayne Koestenbaum—poet, critic, artist, performer—has published nineteen books, including Camp Marmalade, My 1980s & Other Essays, and The Queen’s Throat (nominated for a National Book Critics Circle Award). His next book, a collection of essays, Figure It Out, will be published by Soft Skull in May 2020. He is a distinguished professor of English, French, and Comparative Literature at the City University of New York Graduate Center. Find him at www.waynekoestenbaum.com.