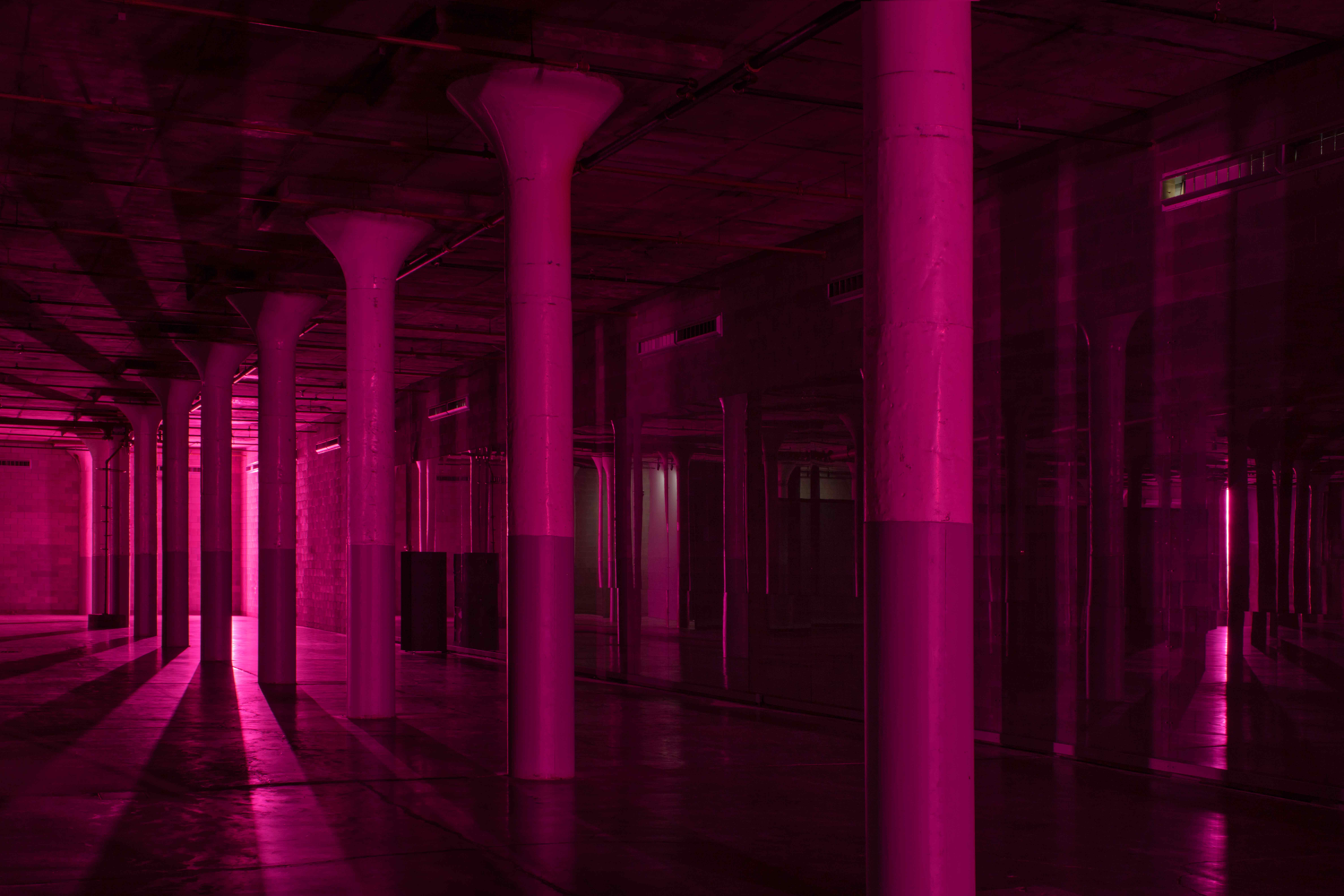 Specially commissioned for Dia:Beacon’s basement level and five years in the making, Party/After-Party is a sound-and-light installation by acclaimed Detroit techno-DJ Carl Craig. A defunct Nabisco-box factory of the Depression era nestled on the banks of the Hudson River, Dia:Beacon is home to an idiosyncratic collection of Minimalist and Post-Minimalist art spanning the 1960s to the present. While not self-reflexive per se, the works there—largely by white American and German artists—could be aptly described as self-referential. They lay bare the artists’ interest in simple geometries, in streamlined fabrication, and in an encounter with art’s materials, objects, and environments. “A shape, a volume, a color, a surface is something itself. It shouldn’t be concealed as part of a fairly different whole,” wrote Donald Judd in 1968. Party/After-Party is a welcome addition to Dia’s repurposed location. In the cavernous space below John Chamberlain’s mangled auto-topias, the shards of glass that compose Robert Smithson’s Map of Broken Glass (Atlantis) (1969), and Richard Serra’s rusted vessel Union of the Torus and the Sphere (2001), Craig draws visitors’ attention to an alternate history of minimalist practice that begins on the factory floors of his hometown of Detroit, sites recursively peopled and unpeopled across the turbulent century by workers, unionizers, and artists alike. 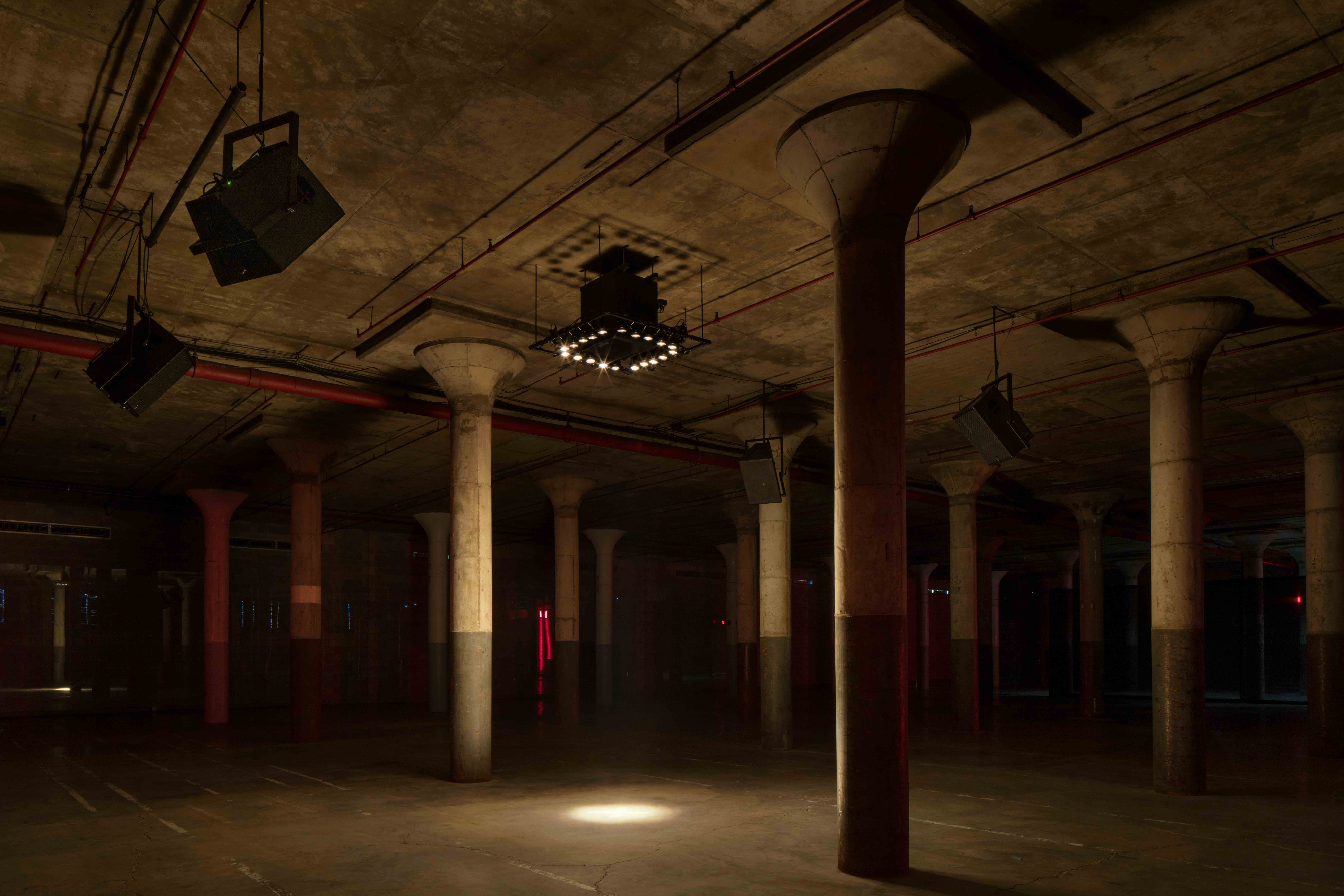 Carl Craig was born on Detroit’s West Side, two years after “the long, hot summer of 1967,” when the Black community fought back against the brute force of the city’s police department—a rebellion incited by the raid of a benign social gathering, a party—and cemented the white population’s flight to the suburbs. Los Angeles became the new home for Motown Records, started by Berry Gordy Jr. in 1959, who, as critic Taylor Aldridge notes, “mimicked factory processes, aiming to incubate and transform talents into formidable performers . . . to avoid becoming a laborer in a Ford factory himself.” Coming of age in the 1980s, Craig danced at queer, predominately Black clubs like Taza and Club Heaven, and listened to WGPR-FM, where radio personality The Electrifying Mojo spun B sides by Prince alongside Detroit’s own gay disco-DJ Ken Collier, and the sparse, highly stylized compositions of the Düsseldorf outfit Kraftwerk, whose pioneering electronica simulated the slow-burn of land travel and our stiff rendezvous with novel devices—the computer, the pocket calculator.

Craig began making music with a four track, a Mirage sampler, and a synthesizer in 1989 under pseudonyms such as Psyche, 69, and Paperclip People—each new moniker a chance to retool techno’s insistent 4/4 with alien noises, soul samples, and sweeping operatic string sections. “Carl wasn’t the first to realize there was no longer a foundation to dance,” remembers British-Ghanaian writer and filmmaker Kodwo Eshun. “He was just one of the first to give into the flux, to grow wings for the new ages to come.” In 1991, Craig founded the independent label Planet E, scouting and promoting musicians like himself, who were interested in the sound-altering properties of production. “Instead of the key being a note,” elaborates Craig, “the key should be a parameter.” 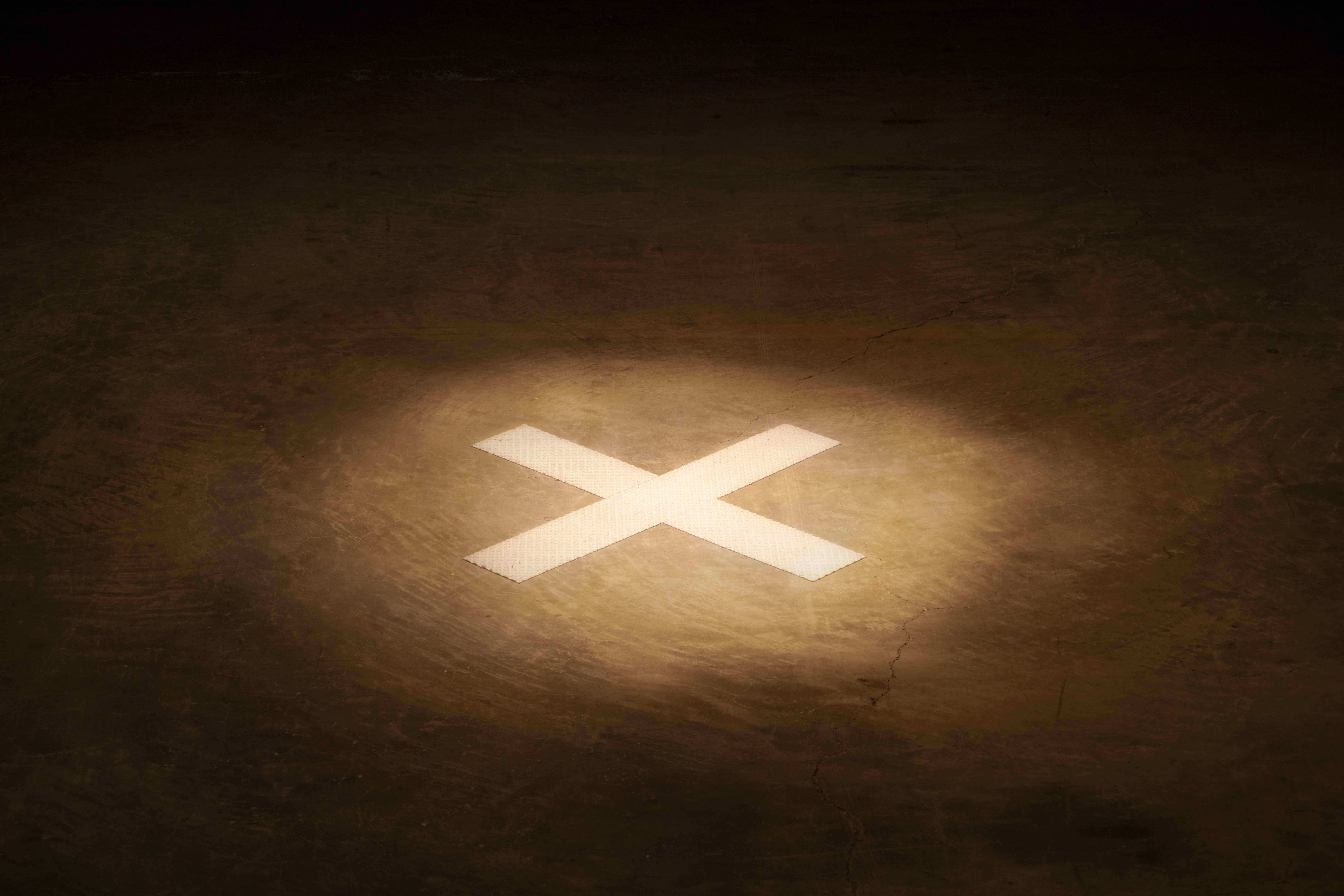 High-pitched curlicues of synth and pockets of reverb bounce off the parameters set for Craig by Dia’s stripped basement walls, curtained with opaque fabric baffles at its two points of entry. Quadrophonic speakers hang from the ceiling around the center of the exhibition space, where a roughly square foot of spotlight illuminates two fat strips of white tape that form an X on the factory floor. The absent host solicits his visitors to stand within, or to walk through, his microclimate of synthetized music. Over the course of thirty minutes, Craig’s suite of music plays out as an emotional diptych: the first half resembles his early work, a lush, analog-hewn jazz-inflected track, with melodies trickling along a firm pulse; the second is down-tempo, almost all pauses, teasing a bass that does not drop. If you remain still, individual notes sound static, buoyed like planets in space. If you choose to move, discrete notes atomize and recombine into thrumming chords of sound. 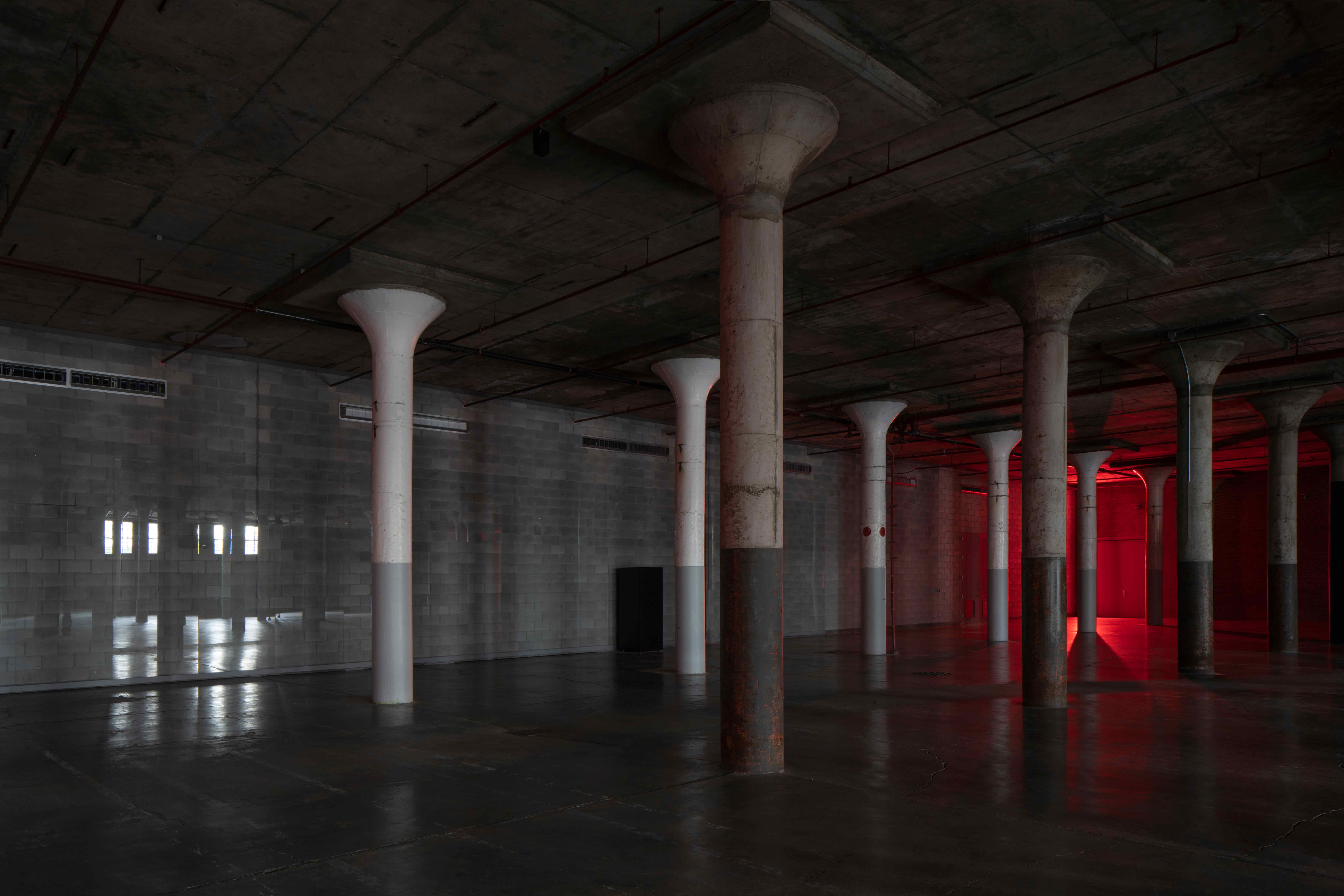 Intermittently, a panel of shutters claps open and shut, allowing a sliver of daylight to momentarily cut through the space, an architectural feature Craig borrowed from Panorama Bar, the dank boîte above Berghain, Berlin’s labyrinthine power plant turned club. LED poles are affixed to the room’s four corners, splashing red, blue, purple, and white hues onto the rows of concrete columns that fortify Dia’s upper level. They seem to pulsate in syncopation with the music—to its backbeat—and at no point do they overpower the aural primacy Craig establishes with his spare install. This darkened expanse punctuated by flashes of light evokes Dia’s other artwork meant for dim ambulation, Walter De Maria’s The Lightning Field (1977). Located in the high desert of New Mexico, De Maria’s massive storm-conductor is made of four hundred steel rods spiked into the earth and arranged in a grid formation measuring one mile by one kilometer. Viewers are invited for one-night stays to witness (or eagerly await) bolts of electricity strike the artwork in front of them. I made the trek in 2014 and spent the night below a quiet sky, kept up because of a calf who had wandered onto the grounds and mooed in loud persistence somewhere from the stygian landscape before me—a sonorous basso moo—all night long. 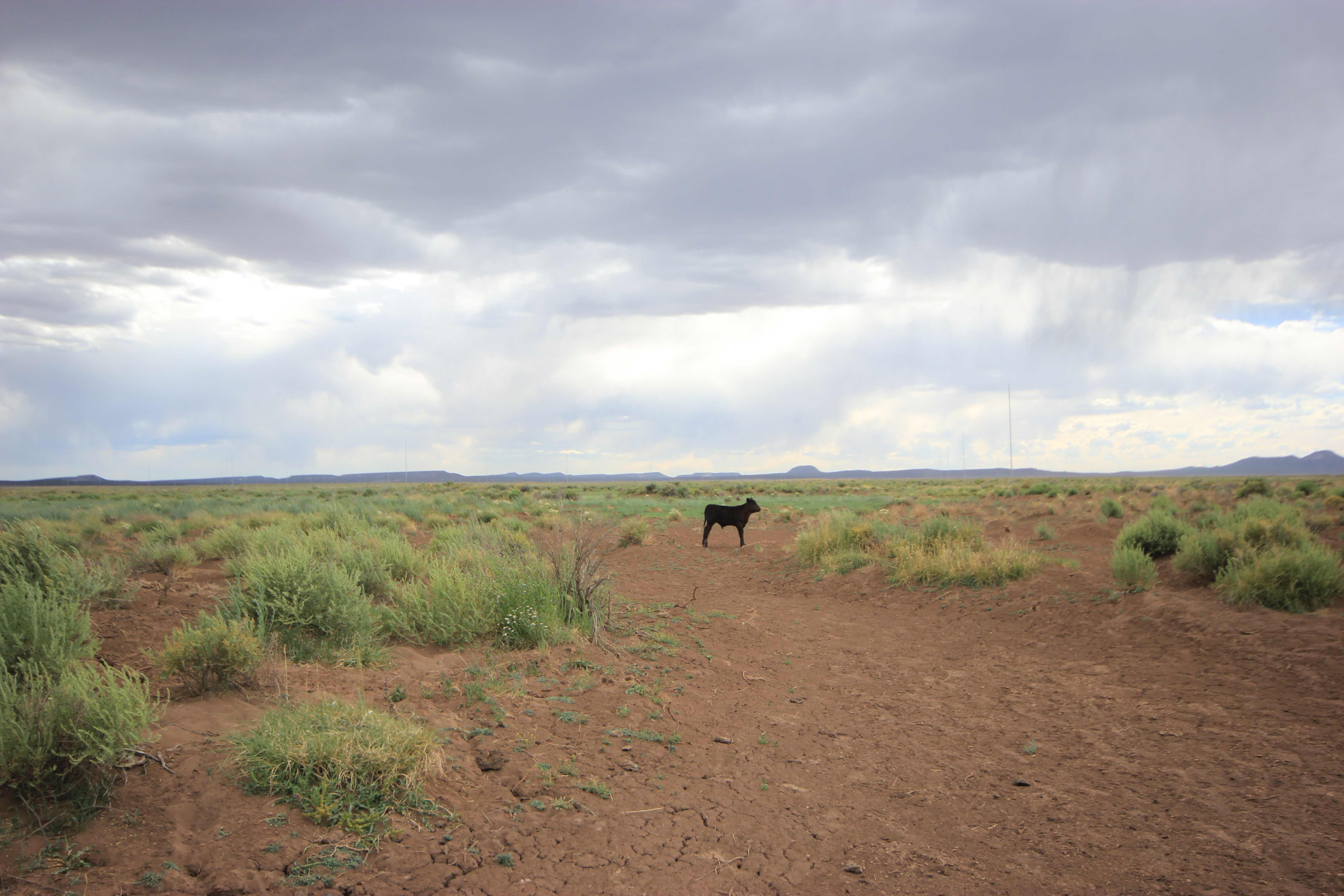 Just as the bawling of the calf offered an unexpected counterpoint to the experience of De Maria’s landscape, Craig’s looping nocturne bumps below Dia’s otherwise tranquil galleries, amplifying the durational format of looking exacted by some of the artworks above. Take, for instance, Andy Warhol’s Shadows (1978–79), composed of 102 panels, seventy-two of which currently wrap around the perimeter of a room. Each panel captures the surface effects of re-mediating technologies that produce light serially—such as the strobe lamp and the cathode ray tube—into a still medium, paint. Offhandedly referred to as “disco décor” by the artist, Shadows is less an image and more a backdrop for a communal setting. As in the shadowy terminal below, movement—of eyes, as they register the inference of light depicted on the canvases; and of the body, as it rotates to see the work in full—is what binds Shadows together. (It’s 1983 and Cybotron’s “Enter” supplies us with choreo- that suggests caution: “Technofy your mind . . . Don’t let them romantize your behind”; it’s 1992, and rock-critic and artist Lorraine O’Grady revises her cogito: “I dance, therefore I think”; it’s 2011 and Mei-mei Berssenbrugge’s poem “DJ Frogs” suggests our methods of perceiving may yet only ever proliferate: “Any event has this invisible thickness, its other dimension.”) 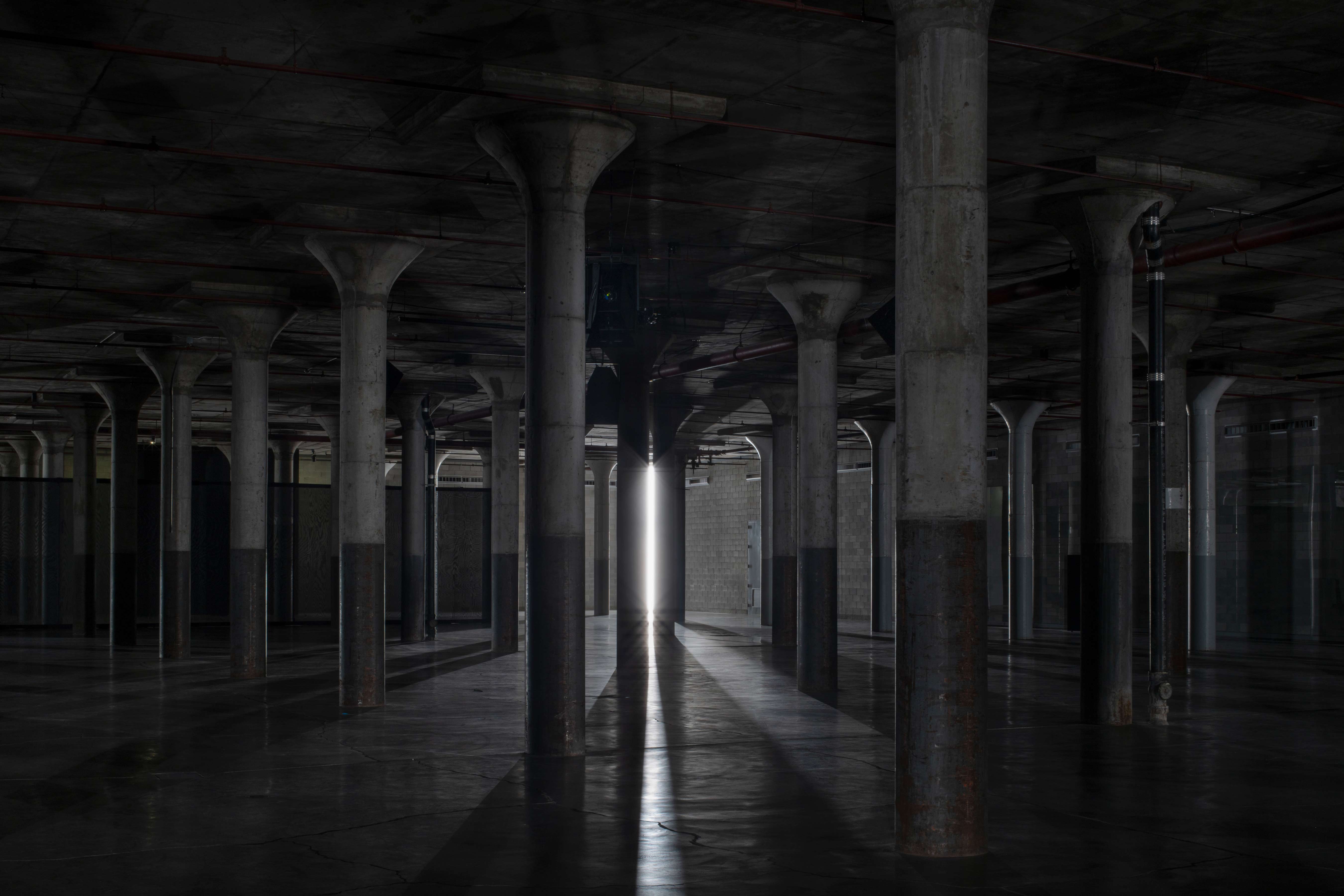 Normally, good parties have people in them. The smells of sweat, the sticky limbs, the flânerie, the dopamine just gushing; a party is best when you’re thrown into it, like a pair of dice, where everyone’s identities and potentials may briefly be upended: friends become lovers, listeners become dancers, and celebrities become what Warhol called “nobodies.” However, Party/After-Party opened on March 6, 2020, one week before New York State began an indefinite series of coronavirus-related lockdowns, thwarting a calendar of public programming into an indefinitely quarantined no-future. Roaming within Craig’s plenum of sound, I’m reminded of the successive crucibles of industrial disenchantment and municipal dispossession that Black music like techno carves its territory in spite of—and while Craig’s exhibition does not anticipate what tomorrow’s parties look like, it suggests that his music will be waiting to usher in whatever comes next.

Shiv Kotecha writes poetry, fiction, and criticism. He is the author of two books, The Switch (Wonder, 2018) and EXTRIGUE (Make Now, 2018), and is a contributing editor for frieze magazine. He lives and works in New York.