Literature
Portrait of an Eye

Her radical selfdom: a collection of early novels by Kathy Acker. 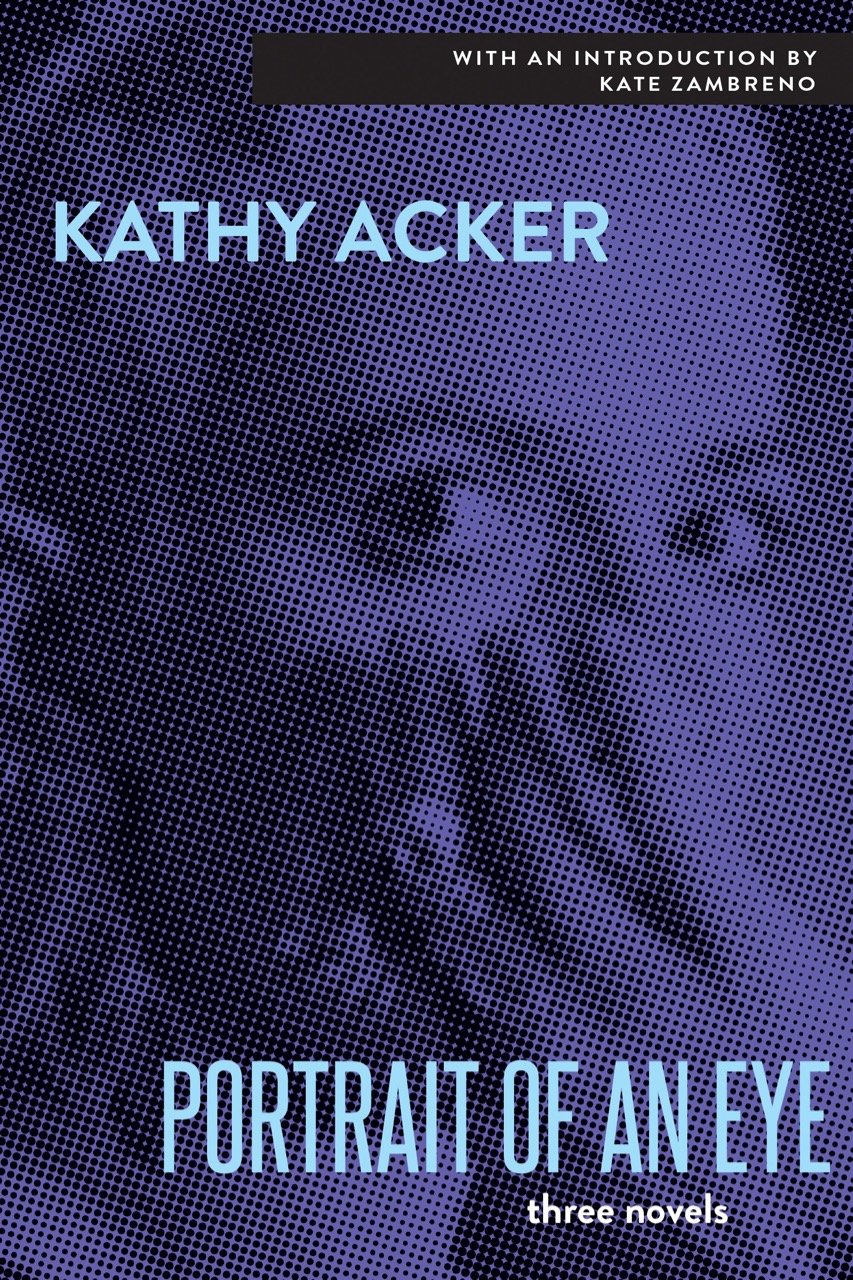 Portrait of an Eye, by Kathy Acker, with an introduction by Kate Zambreno, Grove Press, 310 pages, $17

When Kathy Acker’s Portrait of an Eye first appeared in 1992—collecting her three earliest novels, The Childlike Life of the Black Tarantula by the Black Tarantula (1973), I Dreamt I Was a Nymphomaniac: Imagining (1974), and The Adult Life of Toulouse Lautrec by Henri Toulouse Lautrec (1975), all of which she’d self-published when still a lit-punk novitiate—none other than David Foster Wallace weighed in for Harvard Review. From his signature Midwestern humblepuddle, he lobbed her into a camp of writers he deemed “literarily important but whose stuff I don’t think is very good,” a distinction Acker shared in his mind with the unlikely likes of Gore Vidal, Joyce Carol Oates, and Norman Mailer. His review was at once conceding and damning, pronouncing the trio of books to be “critically pretty interesting and artistically pretty crummy and actually no fun at all to read.”

Lest Wallace be written off as a then-aspiring experimental novelist taking down one of the then-most accomplished, and a woman no less, he was not alone in his distaste. In her review for the Los Angeles Times, Kate Braverman, author of the sex- and drug-fueled autobiographical tale Lithium for Medea (1979), swatted at the book with palpable irritation: “This is, at its core, a coolly deliberate pseudo-literature. And these are anti-novels presumably for anti-readers.” The ultimate injury with which Acker met those insults may be that she, who died of cancer in 1997 at the age of fifty, still remains a vital and exhilarating influence—a complex female figure who practiced a radical selfdom that perennially elicits fascination and imitation. Her life story was made vivid in a terrific and juicy 2017 biography by Chris Kraus (who was also once Acker’s romantic competition); her performance and spoken-word works were celebrated last year in a retrospective titled I, I, I, I, I, I, I, Kathy Acker at London’s Institute of Contemporary Arts. As one of the principal American postmodernists who redrew the outlines of the authorial “I,” she is a wellspring, whether younger generations know it or acknowledge it or not, of contemporary autofiction, though most of these later books are markedly—market-ly?—more dutiful, far better behaved, than Acker’s ever were.

Happily for devout anti-readers, Grove Press is issuing a new edition of Portrait of an Eye, which differs not at all from the initial printing save for the addition of an introduction, “Texts of Nothing,” by Kate Zambreno, who acutely lays out the many brilliant facets of Acker and this omnibus. Portrait was titled in homage to George Bataille’s deeply creepy Surrealist classic Story of the Eye (1928), branding her as the heiress apparent to a lineage of cultural overthrow rooted in the expression and embrace of transgressive sexuality. From William S. Burroughs, she learned how language is inherently political, and how to tear into literary tradition via the cutup. Anyone can fuck, but not everyone can fuck with form. Acker did both profusely. Horny, a word that appears throughout her writing, doesn’t merely name a condition of desire; incanted by her, it is a politic, a portal to a woman’s freedom that opens by articulating and satiating that desire. Her brazen experiments are laced with a wry humor too, the punchline striking at how a woman doesn’t have to work too hard to upset the patriarchy. She simply has to do to them what they have done to her: take everything.

The books collected in Portrait, as implied, capture Acker near the start of her path. By turns ingenious, indulgent, invigorating, and exhausting, each is in possession of Acker’s signature moves: pornographic prose, repetition, plagiarism (attributed and otherwise), shredded story arcs, and schizophrenic narrators who slip in and out of the skins of historical figures, upending clear senses of character and time. The Childlike Life of the Black Tarantula was initially written and circulated as a six-part serial Acker sent out to a mailing list compiled by her friend, artist Eleanor Antin. Of the three novels, it may be the most barbarous, Acker weaving into the story of her young, bloodthirsty “I” diaristic shards of her own life in Southern California. Becoming the Marquis de Sade—what is becoming, when merely an action marked by the invocation of a name?—she declares:

All laws of all nations should allow us, rather, not stop us from creating our favorite perversions because Nature creates these desires for perversions in us before we create the actual perversions. That is, I feel I’m a freak because I want to fuck women, hamsters, trains, criminals, black leather I can’t speak to people I don’t want any one or group of humans to kill me because I do these things. I want everyone to love me. (No.) Let us examine murder.

Like dreams, or nightmares, many of the scenes that compose I Dreamt I Was a Nymphomaniac: Imagining drop off midway, leaving the whole more jagged than kaleidoscopic. Even the author had her reservations about what (and if) she’d achieved. “I’ve been totally depressed about it,” Acker wrote to her friend, the poet Ron Silliman, about the book, “decided in horrible mood it stinks because not crummy enough.” Here, she is the narrator—at least for some of its pages—sharing her story of ravenous sexual desire with that of a character she calls Peter Gordon, after the composer, her partner at the time. In The Adult Life of Toulouse Lautrec by Henri Toulouse Lautrec, she casts the French painter as (likely you’ve guessed it) a sex-starved misanthrope entangled in a murder mystery—and that’s just in chapter one. Readers who find themselves having no fun at all might consider how complicit they are in the persistence of certain fusty literary traditions. Let go of expectations as you would inhibitions, and see what liberties and pleasures await.

Jennifer Krasinski is a writer and critic based in Brooklyn, New York.