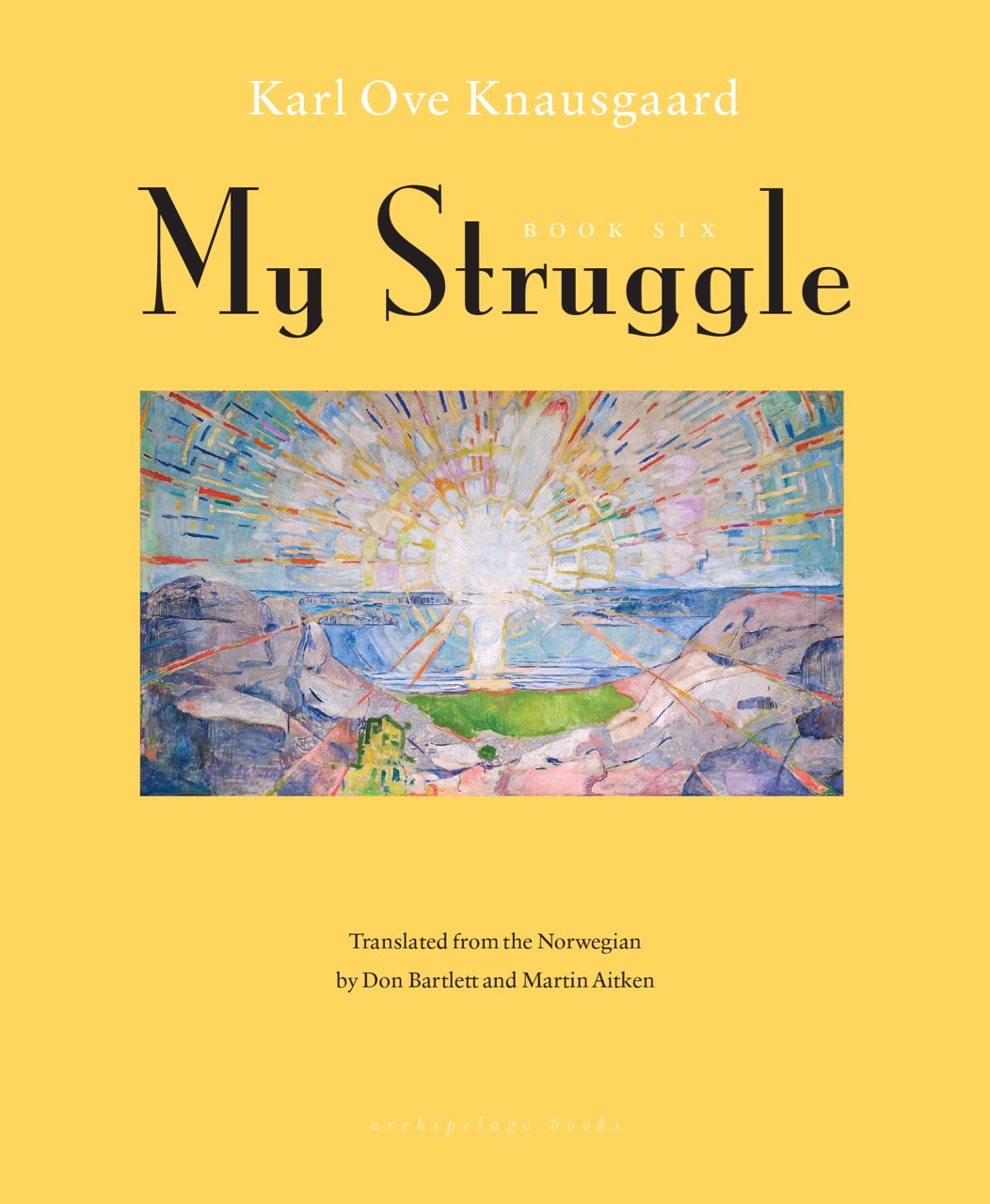 It is nine years since the first volume of Karl Ove Knausgaard’s My Struggle was published in Norway, inaugurating one of the more unlikely global literary successes of recent times. In thirty-six months, Knausgaard rapidly wrote and published six books, running to a total of around 3,600 pages, that traced his evolution as a son, a writer, and a father, in a style that seemed autobiographical, not an act of imagination, but which he insisted should be thought of as fiction. As the last volume was released in Norway, the work began to appear in English, in Don Bartlett’s clear and elegant translations. News of My Struggle’s dizzying Norwegian reception—458,000 sales in a country of 5.2 million people by 2012, a court case, death threats, and of course the provocative title—helped make it a sensation in the Anglophone cultural world. A project that fits well with the priorities (confession, celebrity) of the arts media has also drawn serious critical attention, positive and negative.

Knausgaard’s professed disgust for the tropes and practices of fiction (“just the thought of a fabricated character in a fabricated plot made me feel nauseous,” he wrote in volume two) sparked debate among English-language novelists. In the sleepier corners of the literary world, writers who had never previously expressed any public reservations about making things up suddenly declared that they too felt disgust at the fictionality of fiction, while others ridiculed Knausgaard as narcissistic or simply boring, breaking rules because he wasn’t able to produce compelling plots or characters. My Struggle also added heft to an Anglophone fashion for what the French call “autofiction,” a national tradition that encompasses writers as diverse as Marguerite Duras, Annie Ernaux, Hervé Guibert, and Emmanuel Carrère. In the US, writers who saw themselves in the lineage of John Berger and W.G. Sebald, combining elements of first-person narrative with essayistic digressions, were already swapping DNA with what could be called the School of Downtown, which has an orientation toward art-world aesthetics and the textual experiments of Kathy Acker, Joe Brainard, Theresa Hak Kyung Cha, and others. Add to this the democratic Whitmanian impulses of Ben Lerner, the millennial scourge of the “personal essay,” and the inchoate anxieties about truth that bubbled up during the days of the tedious James Frey fiasco, and it is clear that My Struggle landed in fertile soil.

Literary trends aside, the international consensus has been that Knausgaard is a significant writer. He recently received the 2017 Jerusalem Prize, often seen as a predictor of the Nobel. Now, with the appearance of Book Six, translated by Bartlett and Martin Aitken, English-speaking readers can finally assess My Struggle as a complete work. At 1,156 pages, this final volume is sprawling and episodic. It is also a public performance, in that it was written as the drama around the publication of the earlier volumes was unfolding. There is a sense of the worm eating its tail or tale, as the writer turns to the court case brought by his uncle, mortally offended by Knausgaard’s portrayal of their family, and to the mixed reception of previous volumes. “I had not been honest in that book,” he muses, commenting on a review of volume four. “I wrote it when the pressure was at its peak.” There are moving passages in the new book, notably a painful discussion of his wife’s bipolar disorder and its toxic effect on their relationship, a story that finds a poignant symbol in the cabin they make an unwise decision to buy and then fail to maintain. They imagine it as a haven, but it ends up a squalid eyesore that no one wants to take off their hands.

Book Six should finally put to rest the interpretation of the early volumes of My Struggle as the work of a “noble savage,” a deliberately artless or unmediated outpouring. Knausgaard is frank here about his artifice and more than happy in the realms of intellectual abstraction. Pages are given to discussions of Christian theology, pagan myth and ritual, the limits of Enlightenment rationality, the antidemocratic nature of charisma, the failure of Soviet communism, and a host of other topics. He is fond of völkisch Heideggerian formulations, and is preoccupied by the effect of technological modernity on human Being. “My basic feeling,” he writes, “is that of the world disappearing, that our lives are being filled with images of the world, and that these images are inserting themselves between us and the world, making the world around us lighter and lighter and less and less binding. . . . The symbol of this trend is money.” When he is not worrying that the circulation of signs is dematerializing the world, he is worrying that our disenchanted materialism is no longer sufficiently infused with spirit. Sometimes his arguments are tendentious or get lost in the weeds. A dogged sixty-page analysis of Celan’s poem “Engführung” leaves the reader nostalgic for descriptions of supermarket shopping. At other times his explorations seem urgent, part of an attempt to present “a man in full,” to give weight to every part of his life, connecting his intellectual preoccupations to his domestic ones.

The problem of evil looms large, and in particular the figure of Hitler. The book’s title is, of course, a Hitler joke, and many pages are devoted to a biographical study of the dictator. It is instructive to watch an attentive novelist sifting through what is known about Hitler’s hungry early years, when he scrabbled in the fringes of the Viennese social and intellectual underground. Knausgaard considers Ian Kershaw’s lapidary biography “immature,” “marred by his describing everything, and I mean everything, about Hitler extremely negatively, even such aspects as relate to his childhood and youth, as if his whole life were tainted by what he would become and do some twenty years later.” Knausgaard’s intention is not to recuperate or exonerate Hitler, but to suggest that presenting him as an immutable figure of evil, as Kershaw feels duty bound to do, is a sort of fictionalization. The kind of literary schematism that betrays the biographer’s project is implicitly what Knausgaard is struggling against.

By its nature, My Struggle—a vast text produced at a breakneck pace—is a patchy, imperfect book, but reading it is an unforgettable experience. Knausgaard’s presentation of self is not only a democratic assertion of the importance of an ordinary life, but also a major contribution to the scant literature of fatherhood. The author’s monstrous alcoholic father is succeeded by a damaged son, who himself becomes a father and wrestles with intense feelings of shame and inadequacy as he tries to perform the feat that eludes so many artistic parents—of loving and raising his children without losing the privacy and solitude he needs for his work. The final words of My Struggle are a bit of throwaway machismo, the claim that now that the book is finished, “I am no longer a writer.” Neither Knausgaard nor the reader believes that for a second.

Hari Kunzru is the author of, most recently, White Tears, and four previous novels. His work has been translated into twenty-one languages, and his short stories and journalism have appeared in many publications, including the New York Times, The Guardian, and the New Yorker. He is the recipient of fellowships from the Guggenheim Foundation, the New York Public Library, and the American Academy in Berlin. He lives in Brooklyn.