Visual Art
Take Me (I’m Yours) 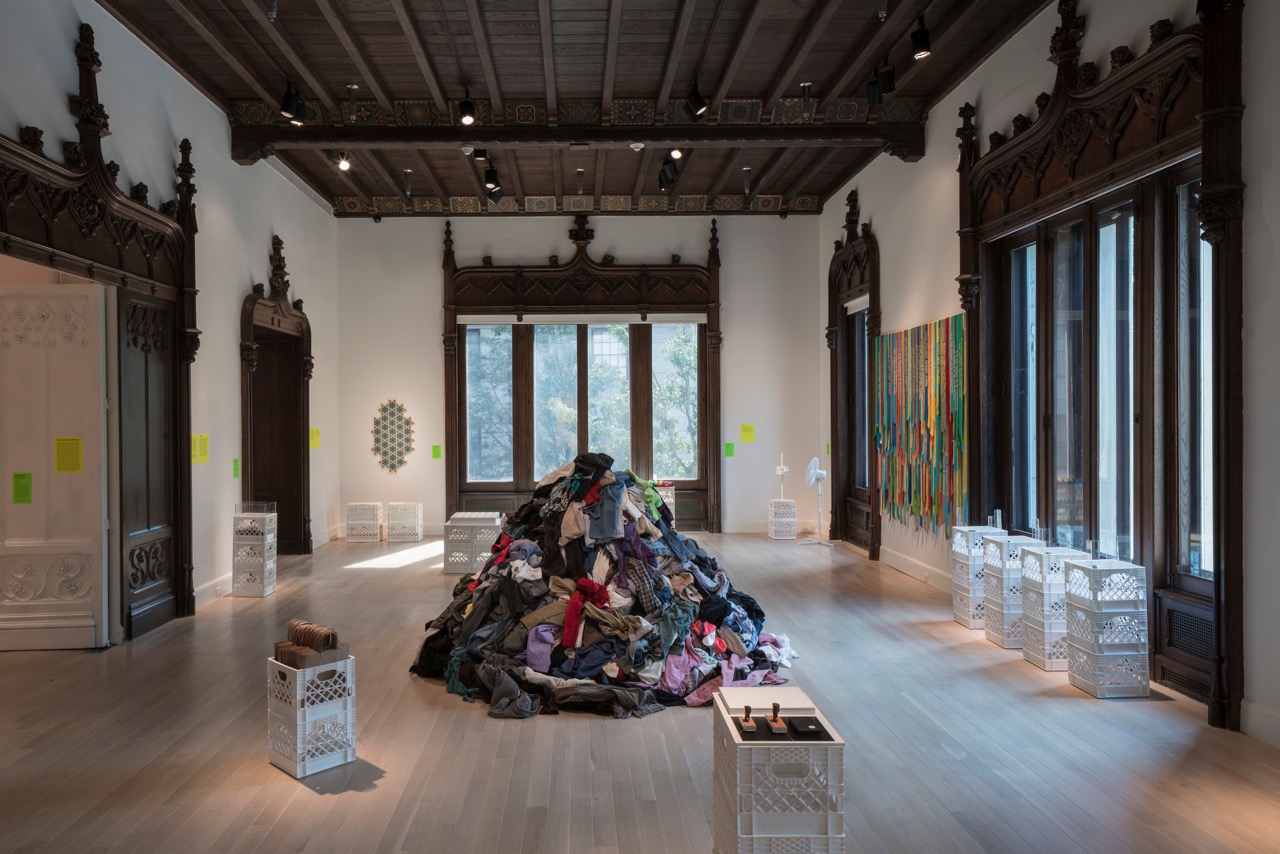 Featuring artworks that visitors are asked to touch, participate in, and bring home, Take Me (I’m Yours) was first realized in 1995 at the Serpentine in London, co-conceived by curator Hans Ulrich Obrist and artist Christian Boltanski. This third version of the show, currently on view at the Jewish Museum, includes the curatorial voices of the museum’s Jens Hoffmann and Kelly Taxter, and an expanded roster of forty-two international and intergenerational artists employing sculpture, works on paper, installation, performance, and digital media.

Boltanski’s Dispersion (1991-2016), a large mound of used clothing to peruse and take in brown paper bags, is art to contemplate as well as an offering for viewers to invest with new meaning and use. Emblematic of the intentions of the show to “create a democratic space for all visitors to take ownership of artworks,” it is prominently displayed on the second floor of the museum, as is a “manifestation” of Felix Gonzalez-Torres’s “Untitled” (USA Today) (1990), a “carpet” of candies individually wrapped in red, silver, and blue cellophane lying in “endless supply” under a window, and continuously replenished by museum staff as they are picked off by gallery-goers. The curatorial team asserts Take Me (I’m Yours) as “an homage to the work of Felix Gonzalez-Torres” (1957-1996). 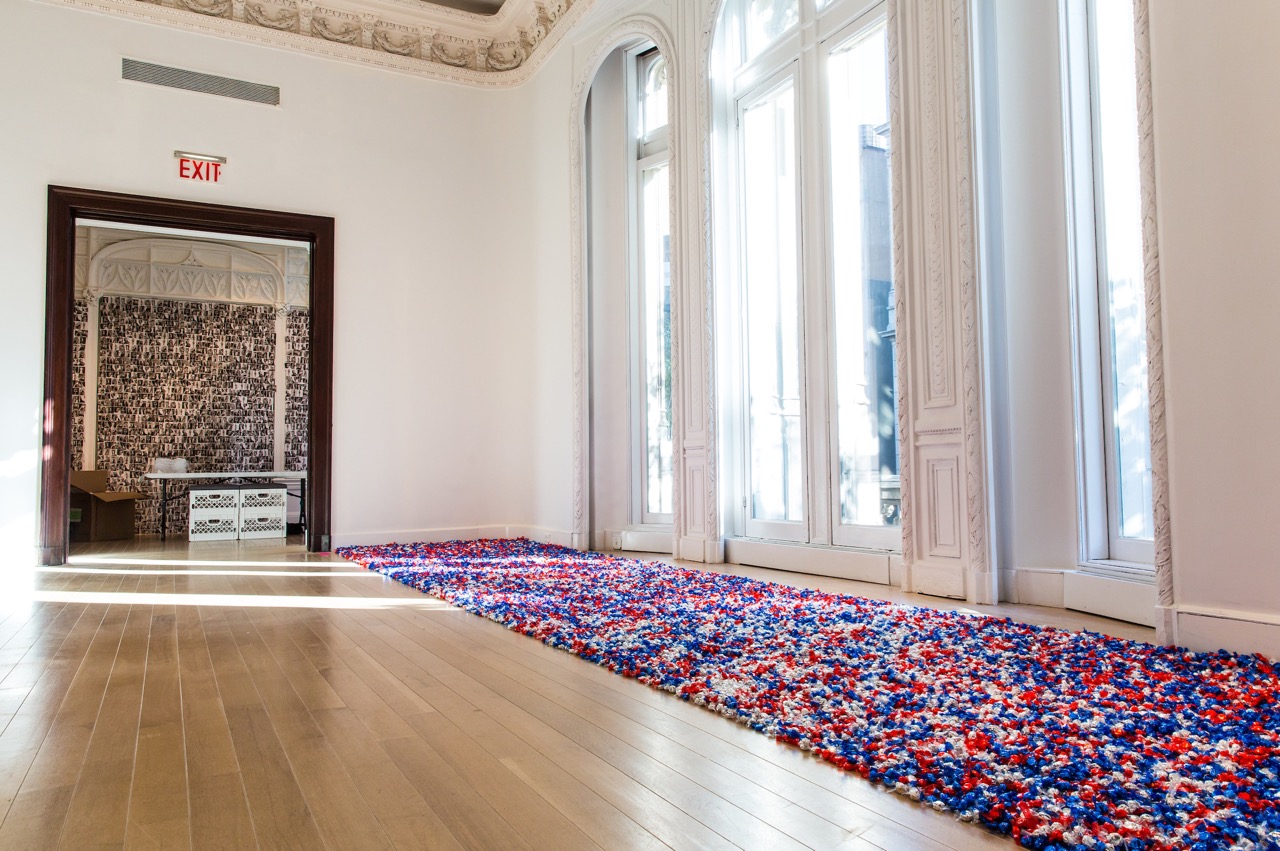 Visiting TMIY, I found myself partaking in a wide range of works with varying tones and stakes. There was the pointed irony of Luis Camnitzer’s stamps (one of his “authentic” signature, another declaring “MINE”) and Martha Rosler’s double-edged Free Gift!, an inkjet print of bejeweled goods collaged on one side, with a page spread of Marx on commodity fetishism on the other. There was Allen Ruppersberg’s Untitled (Felix), an elegiac tribute of cropped and photocopied skyscapes, alongside Alison Knowles’s no-frills gift of an opportunity for direct address and attention via open mike and amplifier. There was the clarity of the call for overt political action in Daniel Joseph Martinez’s (America) Adopt a Refugee, consisting of a bin with Mylar emergency blankets to be passed on to those in need. I could also appreciate resonances between works such as Angelika Markul’s Gone with the Wind, where a fan helps fill biodegradable plastic bags with air, and Yoko Ono’s Air Dispensers, in which plastic capsules already filled are available for purchase; and Maria Eichhorn’s self-reflexive books and bibliographies and Amalia Ulman’s punning leather bookmarks, with their mutual engagement with printed text as something both physical and referential. 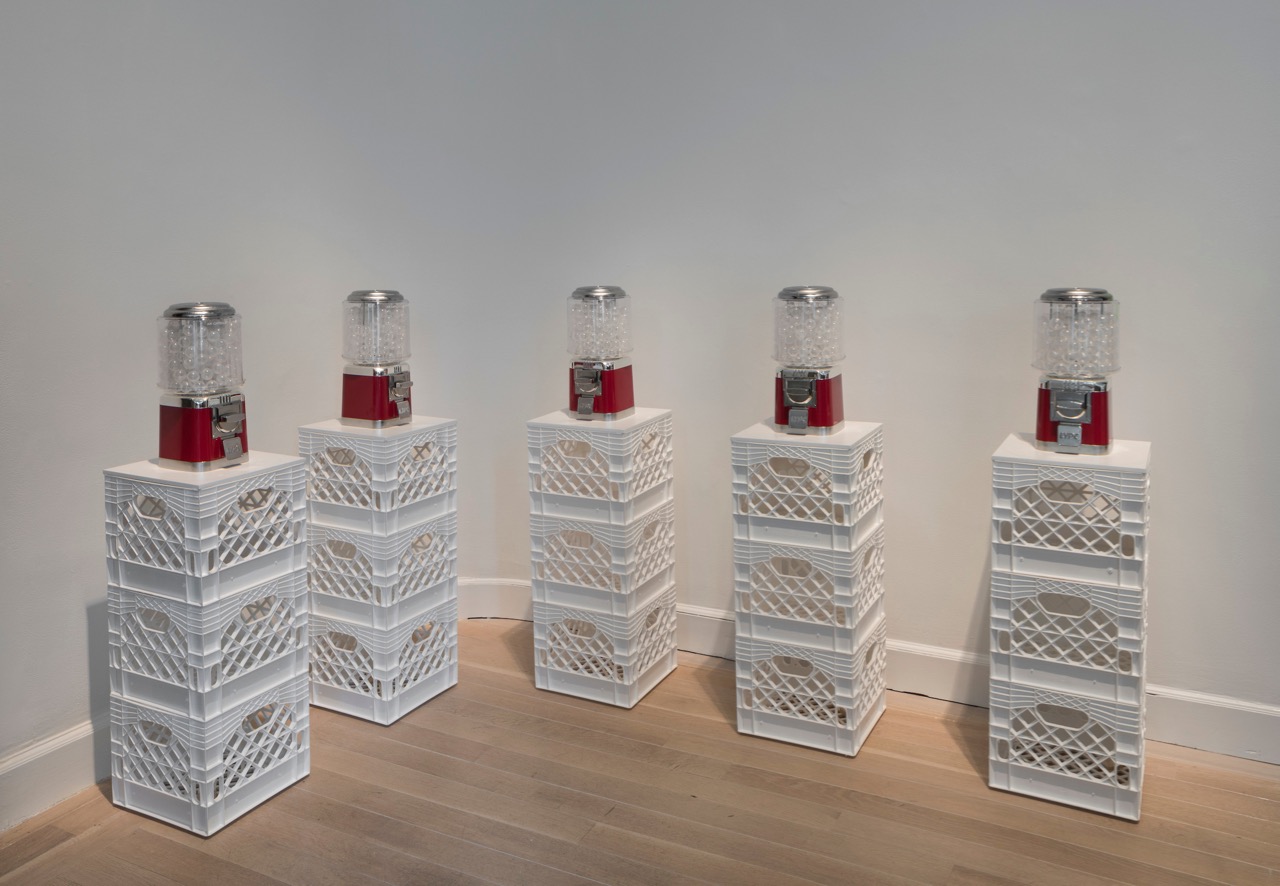 As I spent more time in the museum, though, with my Boltanski bag filling, I started to feel a bit uneasy, as if with shopping fatigue. Many of the giveaways started to look like just so much stuff to acquire, to sort, to potentially store, to weigh me down. Scholarship on Gonzalez-Torres’s work parses his sculptural engagement with the disciplined geometries and perceptual spatial experiments of Donald Judd and Carl Andre. But TMIY was calling up less minimalism proper than the decluttering movements of hashtag minimalists trending in the blogosphere. Further, I could not reconcile the exhibition wall text tag “#Property is theft,” per nineteenth-century French anarchism, with the show’s pitch for ownership as constitutive of a democratic ideal.

Weaving past nannies and strollers to get to the museum on the Upper East Side, to be met there with the institutional (and vaguely Montessorian) directive “Don’t Just Look. Touch, Take, Share,” had made me wonder distractedly about the proliferation of children’s museums today. (I would later learn, in fact, that the establishment of Hands On! International Association of Children in Museums was roughly contemporaneous with the Serpentine exhibition.) If not exactly infantilizing, is there still not some level of disciplinary oversight and coercion operating? Are we not set up to touch later, not now (Daniel Spoerri); to photograph this (most of the show), but not that (Ono, Gilbert & George); to take some, but not all (mom, museum, and superego)?

Ambitious exhibitions like TMIY that attempt to “upend museum conventions” by “subverting the usual politics of value, consumerism, and the museum experience” open themselves up to greater scrutiny of said conventions and politics, and the alternative. Works that are interspersed outside the main galleries—such as Tino Sehgal’s contribution in the museum’s bookstore (those with the inclination can ask the cashier); Jonathan Horowitz’s genial exchange booth of random items that change daily (an umbrella, ear buds, a fortune cookie from Ian Cheng and Rachel Rose’s installation upstairs, and band-aids among them when I was there) by the reception desk; or General Sisters’ sustainable toilet paper for use in the bathroom (accessed through the Sargent portrait show in an adjacent gallery)—begin to resist and show up museum business as usual. Still, to what extent is anything upended or subverted? When asked if his job now entailed more work, a guard told me, “Third floor, don’t touch, second floor, touch. For us, it is the same.”

The framing of the show also provokes curiosity about motive, follow through, and the financial gymnastics that undergird such a magnanimous venture. With its goal of distributing over 400,000 works (funded in part by a successful Kickstarter campaign), the museum makes a good case for its generosity. But even a cursory understanding of gift economy would suggest how complex a gesture is largesse, that in fact a gift always establishes debt. As the wall text entitled #Gift acknowledges, “many psychologists argue that gift giving has an even more beneficial impact on the giver.” Not to invoke the critical art of the 1990s all over again, but what does the institution as giver gain and we as receivers owe? Treats prohibit tricks, after all. 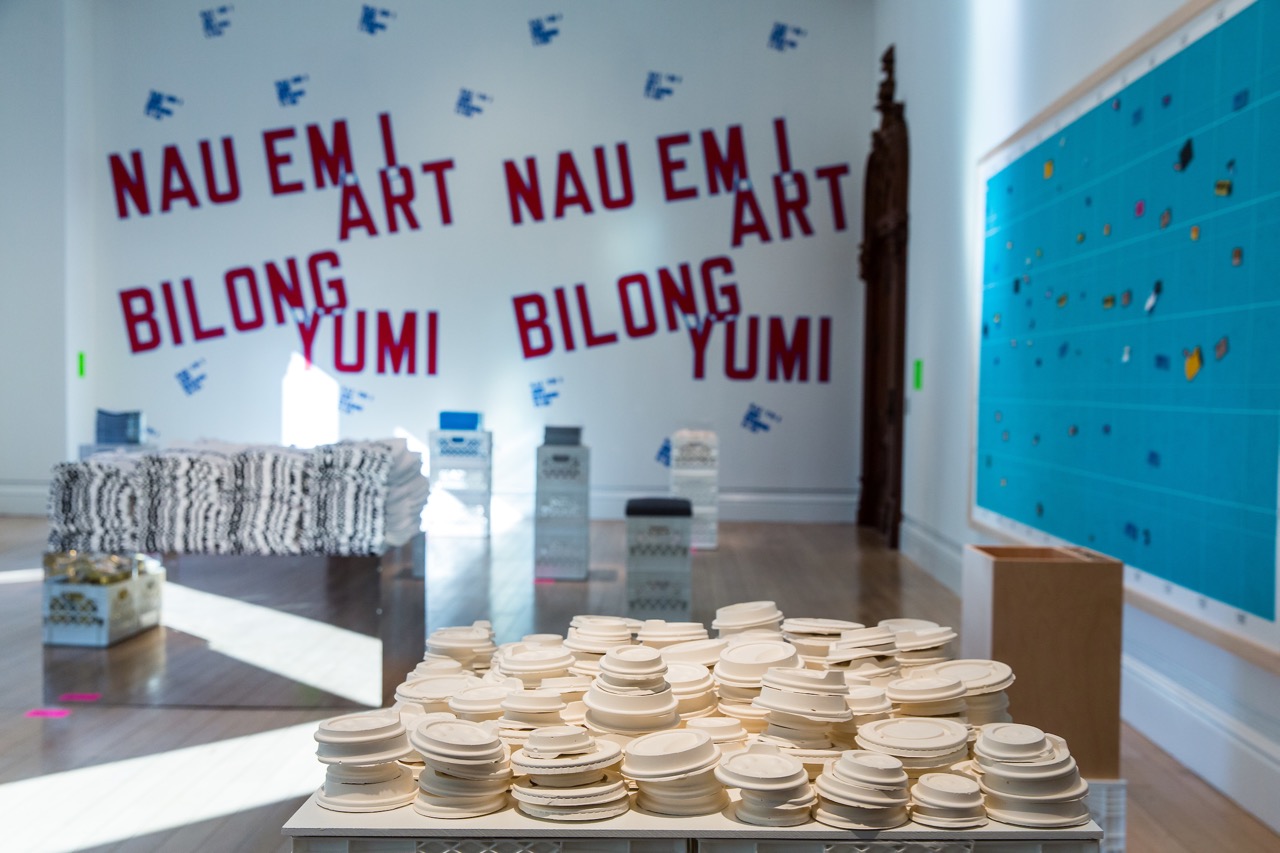 I returned to the exhibit to double check on, among other things, the exact wording on Rirkrit Tiravanija’s T-shirts, to find his stainless steel bin empty, with a sign that was not there before: “Please take only one.” When I asked a museum staff member (who happened to be adding and redistributing more of Uri Aran’s plaster coffee and soft drink lids nearby) if they were all out of T-shirts, she said that there were no more for the day, but that there would be more throughout the course of the show. To my query about how that rate of availability was determined, she was less than forthcoming, and I did not press as I could see how defensive the question made her. Perhaps I imagined it, but it was as if she also sensed that when transactions of generosity become more and more conditional, the internal logic of the show feels a bit off, if not faulty. I had seen Tiravanija’s slogan before in another context, so am fairly certain of what it said: “FREEDOM CANNOT BE SIMULATED.” Indeed?

Sowon Kwon is an artist based in New York City. Her recent work includes contributions in Triple Canopy magazine and Broodthaers Society of America. She is currently working on forthcoming projects with Full Haus in Los Angeles, CA and Gallery Simon in Seoul, Korea. She also teaches in the Graduate Fine Arts Program at Parsons The New School.