An exhibition dreams of another world, but what gets left out
of the picture? 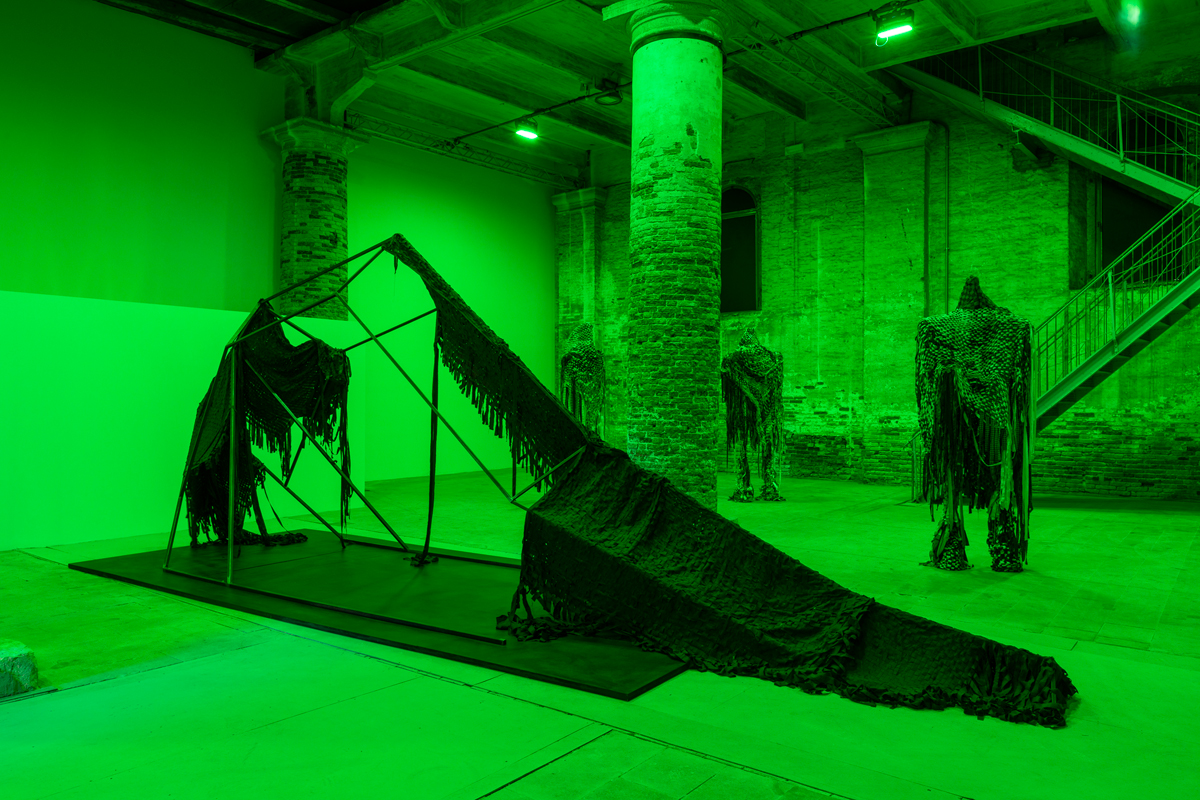 “We all lead three lives, the true one, the false one and what is the third?” This question is posed to the young protagonist of Joy Williams’s novel Harrow by her tutor. She cannot answer it. Khristen lives at the tail end of climate change, at the edge of global apocalypse, in a strange and barren world. Her mother, who later disappears, believes Khristen uniquely gifted, a seer of sorts, because, as a child, she briefly died and then returned to life. Williams’s keen and darkly funny novel is full of pseudo-parables and Zen koan–like utterances that are at once earnest and vaguely mocking. For those who hear the death rattle of the earth, what it means to be human—to conceive of a future at all—is a huge, unanswerable query. 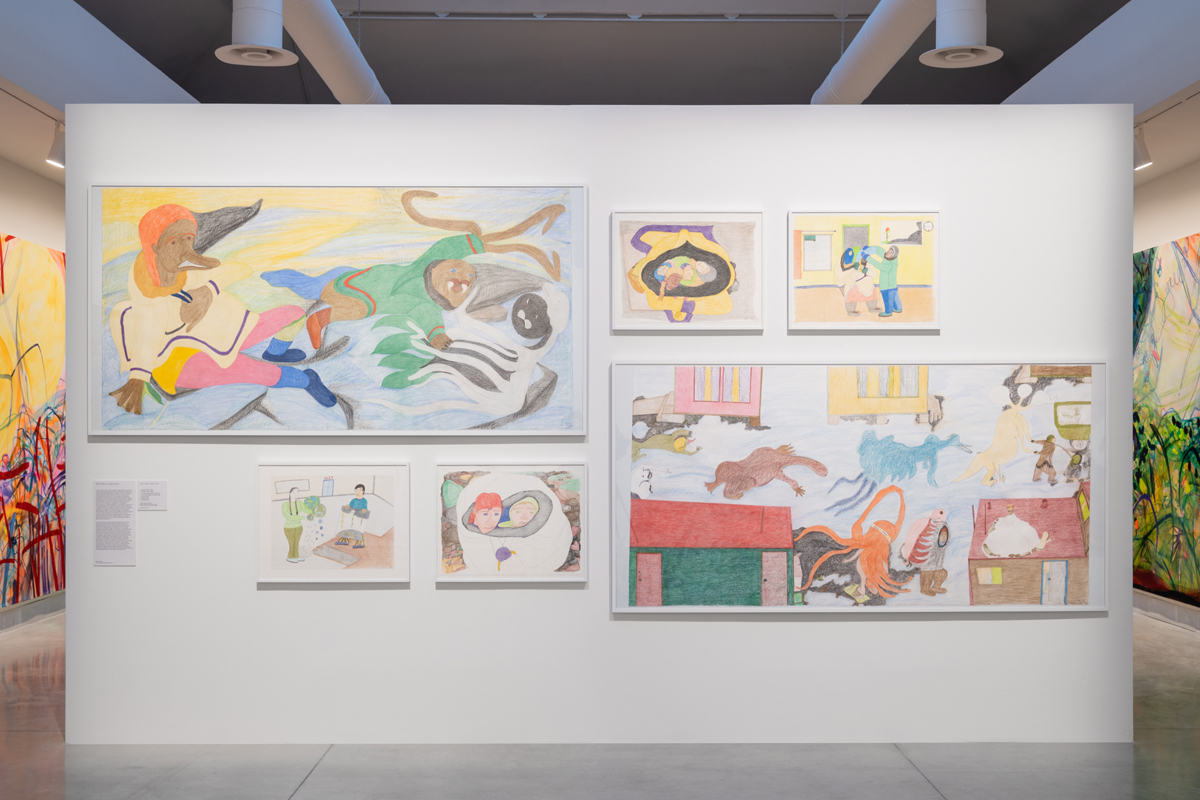 What is the third life? The question returned to me forcefully as I wandered, unsettled, through the 59th Venice Biennale. The Milk of Dreams takes its title from a children’s book by the Surrealist artist Leonora Carrington, which paints a fantastical realm of bodily metamorphoses, beautiful beasts, unlikely friendships, and flashes of cruel, absurdist humor. The exhibition, curated by Cecilia Alemani, is just as wild and weird, expansive, curious. Considering ways artists past to present have reimagined concepts of the human, the sprawling show—which includes 213 practitioners from fifty-eight countries—loosely tours through varieties of transformation, both physical and ideological. We have the human decentered, part of a larger, anti-Enlightenment rubric; the human as animal, or plant, or both, or neither, every organism equal; and the post-human, the cyborg, the human turning into machine. The human is not stable; the human is in flux. The human imagines a different world than the one we have been given. 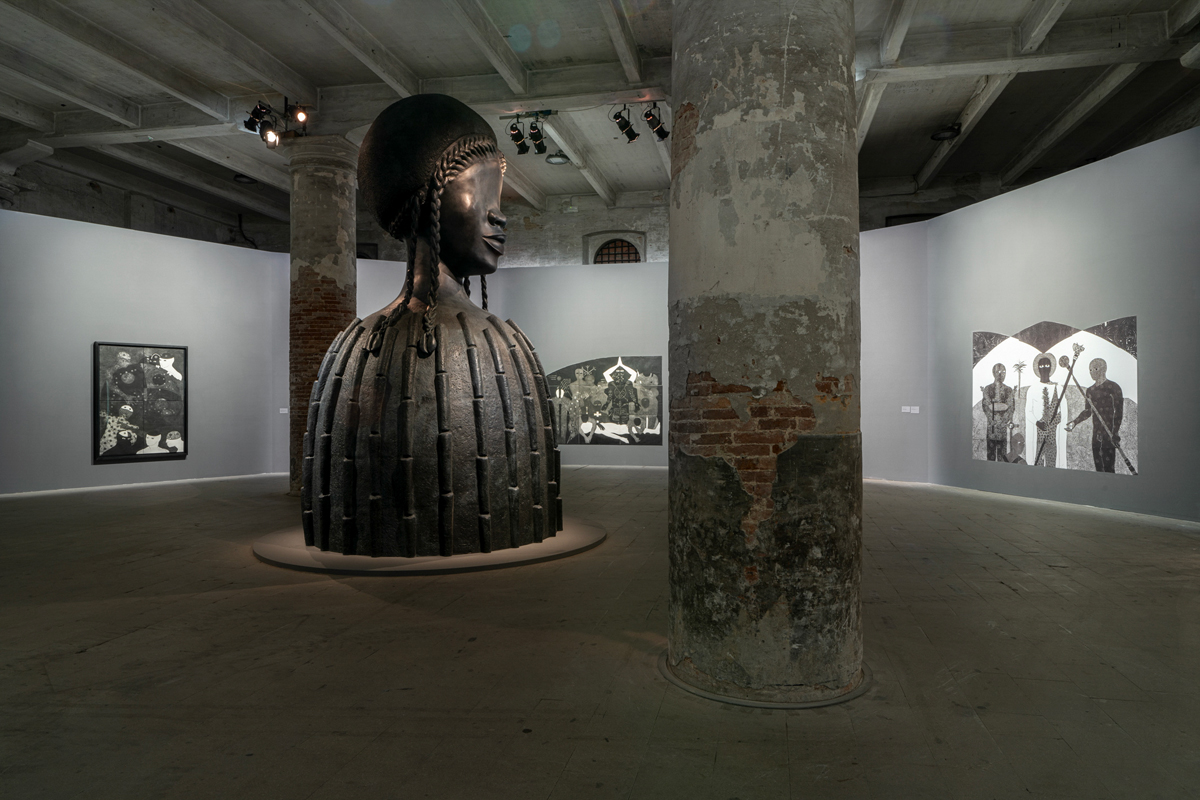 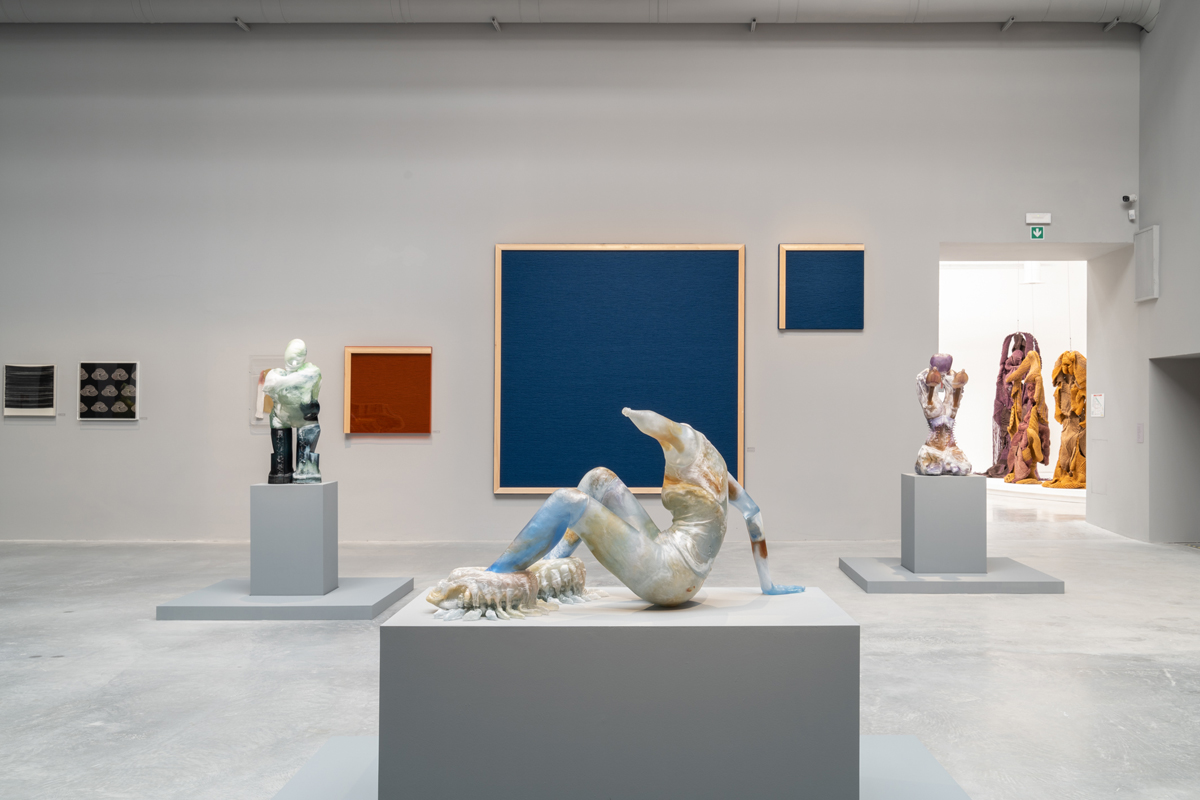 This formula of wall-based works (largely painting) plus sculpture—mirrored forms and themes—carries on throughout the exhibition and is at times repetitive and obvious. The Milk of Dreams is at its most thrilling when it is non-illustrative, when recurrent motifs and metaphors of becoming are troubled and complex, and when the works offer experiences rather than examples of metamorphosis and possibility. For, when we conceive of self-transformation via union with objects or technologies, surely this includes encounters with art? I was drawn to pieces like Candice Lin’s Xternesta (2022), a kind of eccentric mixed-media laboratory that conjoins science with traditional medicine, art with ex-votos, sacred with profane; Shuvinai Ashoona’s colorful drawings, in which animals from the Inuit imaginary—the walrus, the platypus, the octopus—live alongside denizens of the North in their stark, prefab housing; Sandra Mujinga’s neon-green installation, Sentinels of Change (2021), whose titular textile forms hang heavy and ominous, neither human nor other; Kaari Upson’s Portrait (Vain German) (2020–21), ten amorphous portraits made of layered resin, urethane, and pigment—mauve, pink, blue, green, brown, yellow, thickly encrusted, ghostly; and Miriam Cahn’s vibrant, violent, sensual paintings—babies, fists, floating, fucking. 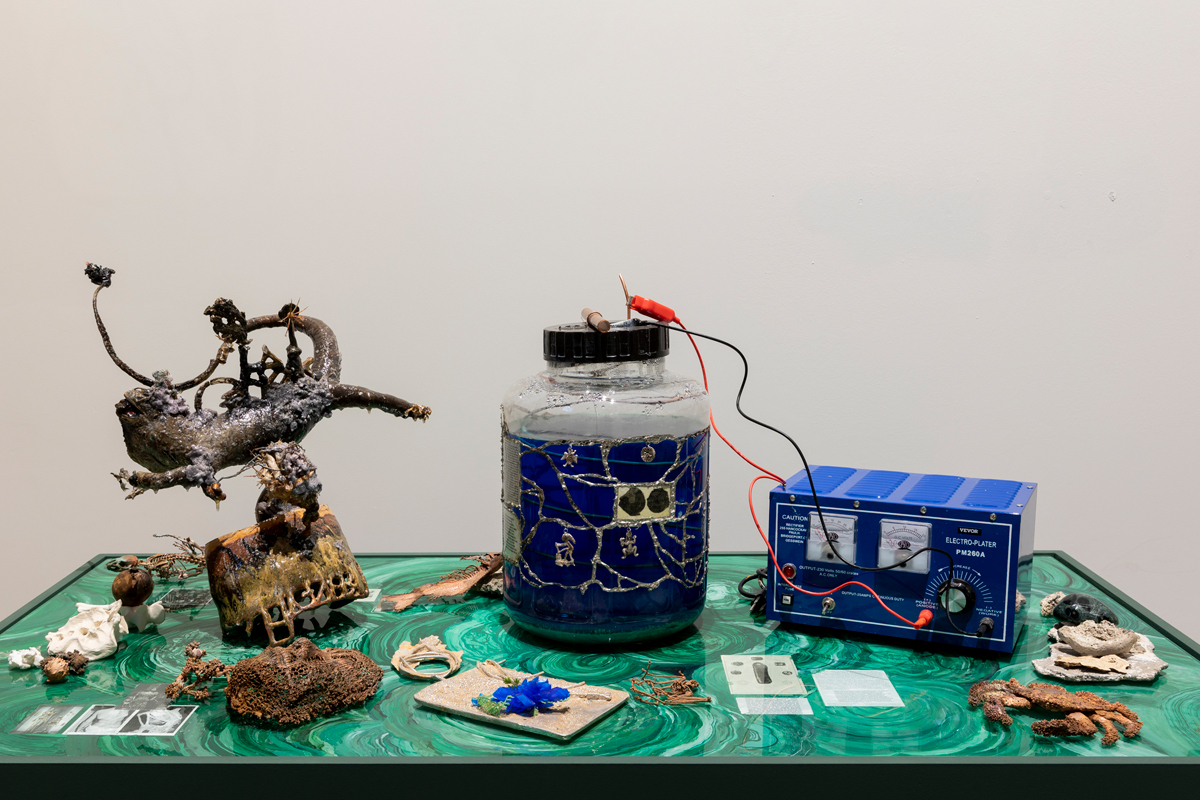 Alemani’s methods are inclusive, nonhierarchical, syncretic, and transhistorical. Unlike so many international biennials, The Milk of Dreams is less a tour through “contemporary art now” than a place of discovery and experiment, a chance to rewrite lineages across time and place. Five “time capsules” punctuate the exhibition with curated shows that elucidate key art historical themes, paying careful attention to overlooked practitioners and trajectories. The fulcrum of these is “The Witch’s Cradle,” which focuses on the ways in which Surrealism, Futurism, Bauhaus, and the Harlem Renaissance and Négritude movements disrupted conventional understandings of self and body, particularly for women. It contains extraordinary works by Dorothea Tanning, Remedios Varo, and the show’s doyenne, Carrington, among others. I remain haunted by Toyen’s anguished lithographs, The Shooting Gallery (1939–40), and Nadja’s C’est moi, c’est encore moi (1926)—lipstick mouths drawn on scraps of paper, her existential assertions written in pencil beneath. Nadja, who named herself from the Russian word, nadezhda, for hope, and who ended up with so little. It’s me, it’s me again. 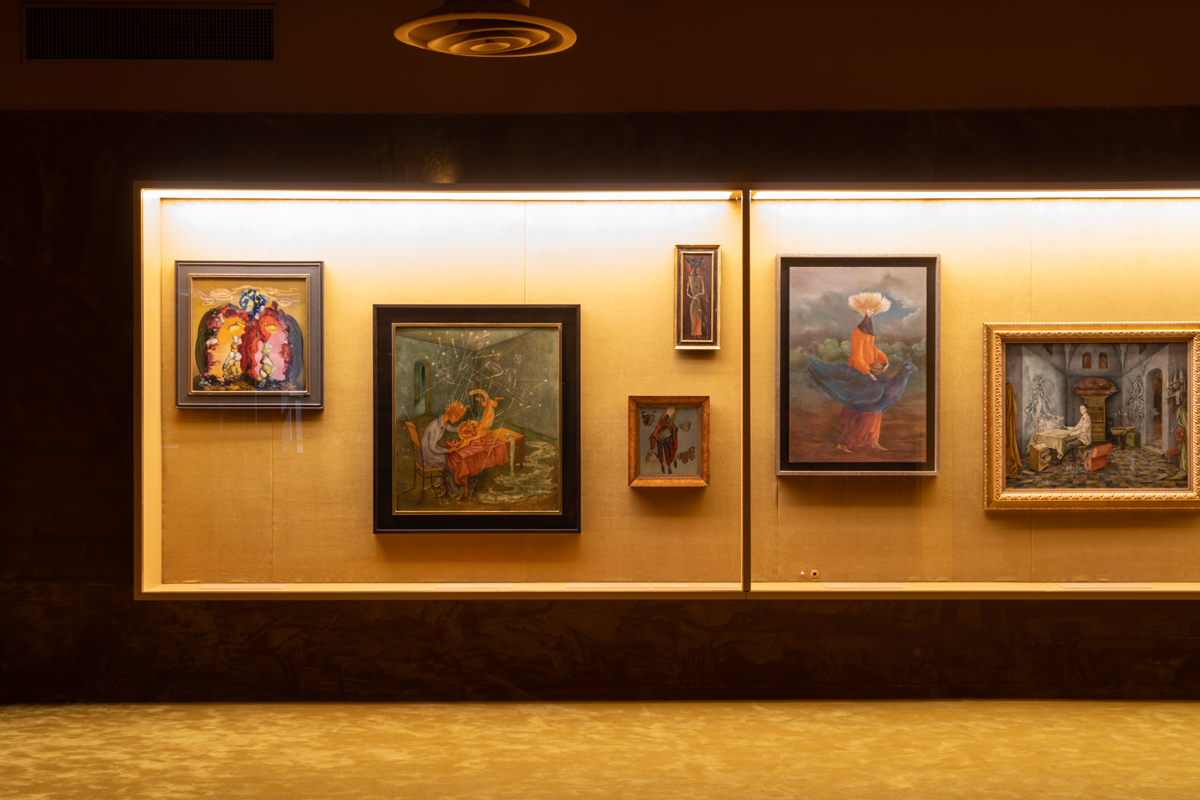 The majority of artists in The Milk of Dreams are women, and most of the rest are nonbinary. Reasons for this are slightly vague, not extending much beyond visibility and art-historical recuperation. This is fine, to an extent: it’s our turn, and all that. But I was vexed by generic invocations of “sisterhood” (can I know more about these sisters before entering a coalition with them?) and indistinct references to Indigenous Knowledge that read as paternalistic. Identities do not, unfortunately, come with built-in liberatory politics; Indigenous Knowledge is vast, varied, rich, specific. (This is a whole other essay.) 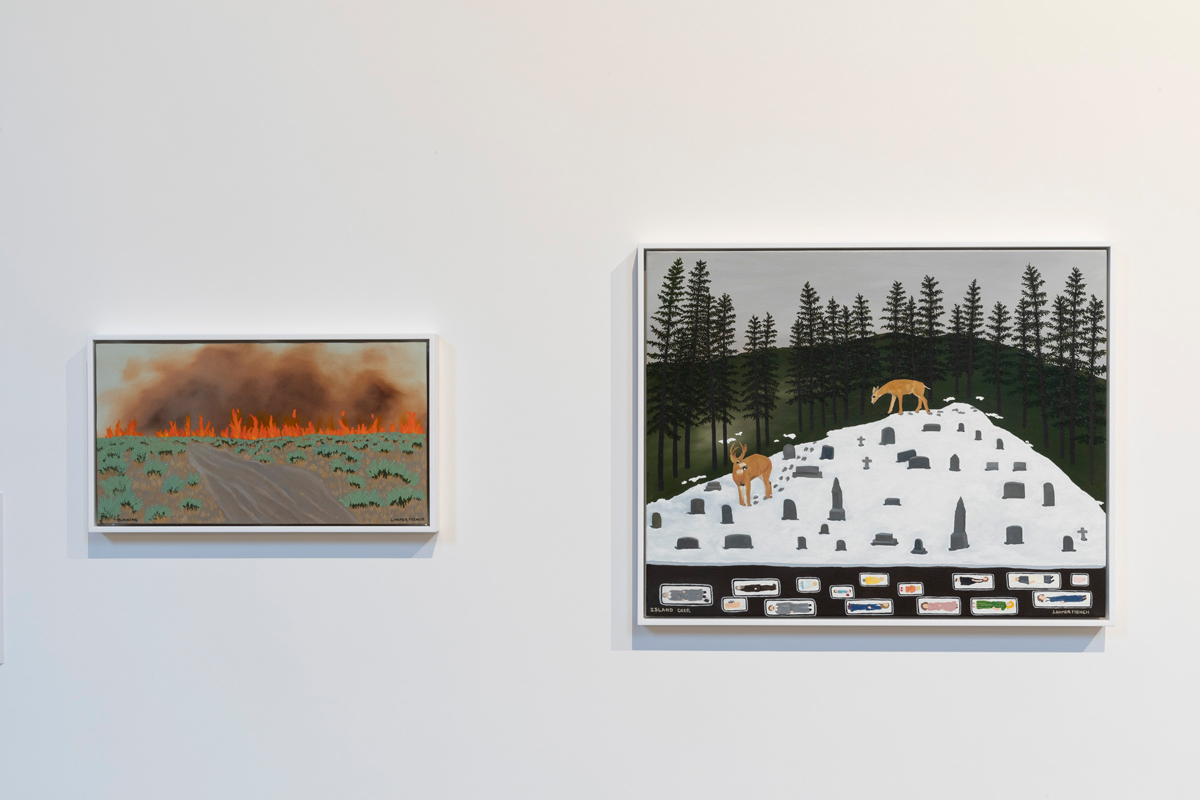 But reader, I profess to you a greater difficulty: I could not enter the dream, I was restless, I took a dark path. At the margins of fantasy, I saw labor, capital, poverty, and death, which the fantastical, as framed, seemed so keen to elide, but without which it could not exist. The coffins beneath the snowy, winter ground of Jessie Homer French’s painting Island Deer (2020), some holding the bodies of children. The spectral mud creatures in Ali Cherri’s film, Of Men and Gods and Mud (2022), who are summoned by the punishing construction work on the Merowe Dam in Northern Sudan. Claude Cahun and Lise Deharme’s children’s book, Le coeur de pic (2004), in which a cornflower avers, tu ne meurs que de regret. You only die of regret. Cecilia Vicuña’s La comegente (The People Eater) (2019), which depicts a nude woman as she consumes an endless line of bald, nude, faceless people. I dreamt I had to eat evil doers, digest them, and defecate them for my shit to fertilize the land, so a new civilization can be born, the wall label elaborates. 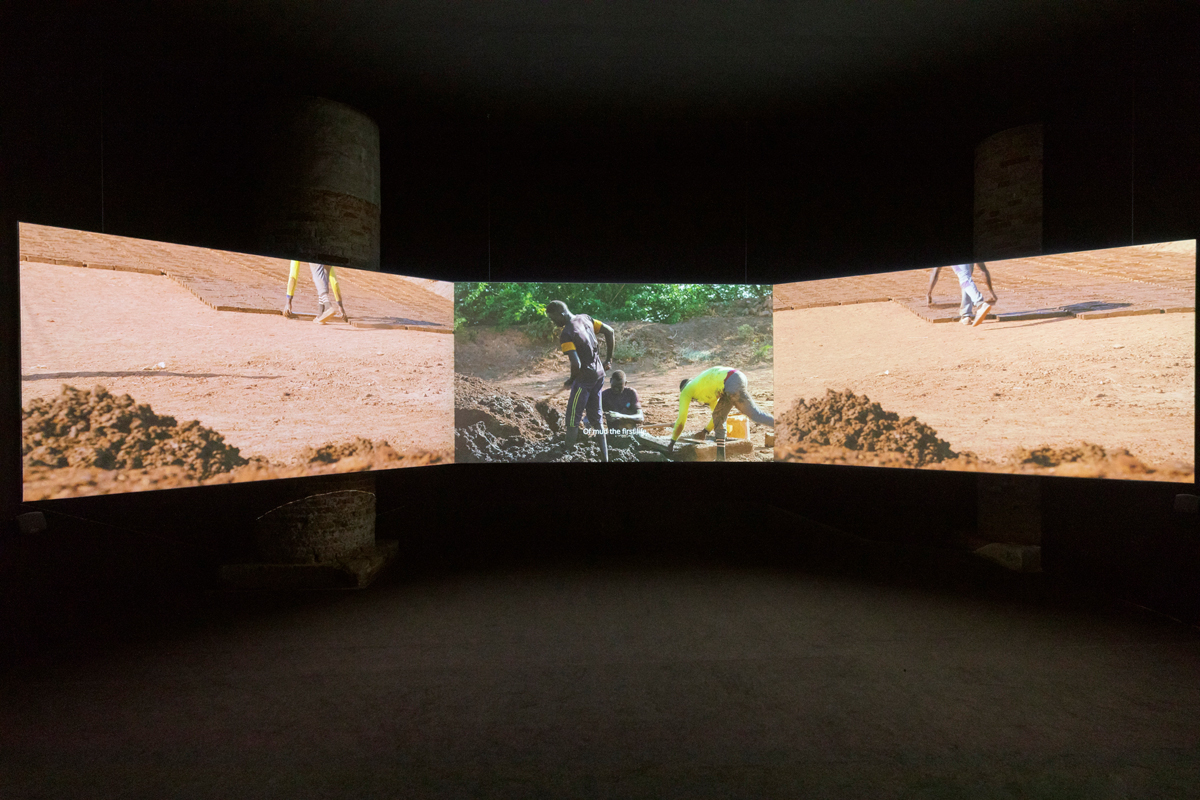 The Biennale handbook, which went to print a few days after the invasion of Ukraine by the Russian government, declares its firm condemnation of the conflict. The Biennale di Venezia, it tells us, hopes “that international diplomacy will quickly put an end to the grief and suffering of the Ukrainian people and restore full freedom and peace.” International diplomacy—another fantasy. Can we dream freely at the Biennale, with its infrastructural veneration of the nation-state? What happens after the dream? The grim reality? If we invoke “the future,” its fantastical possibilities, we ought to be specific about whose. 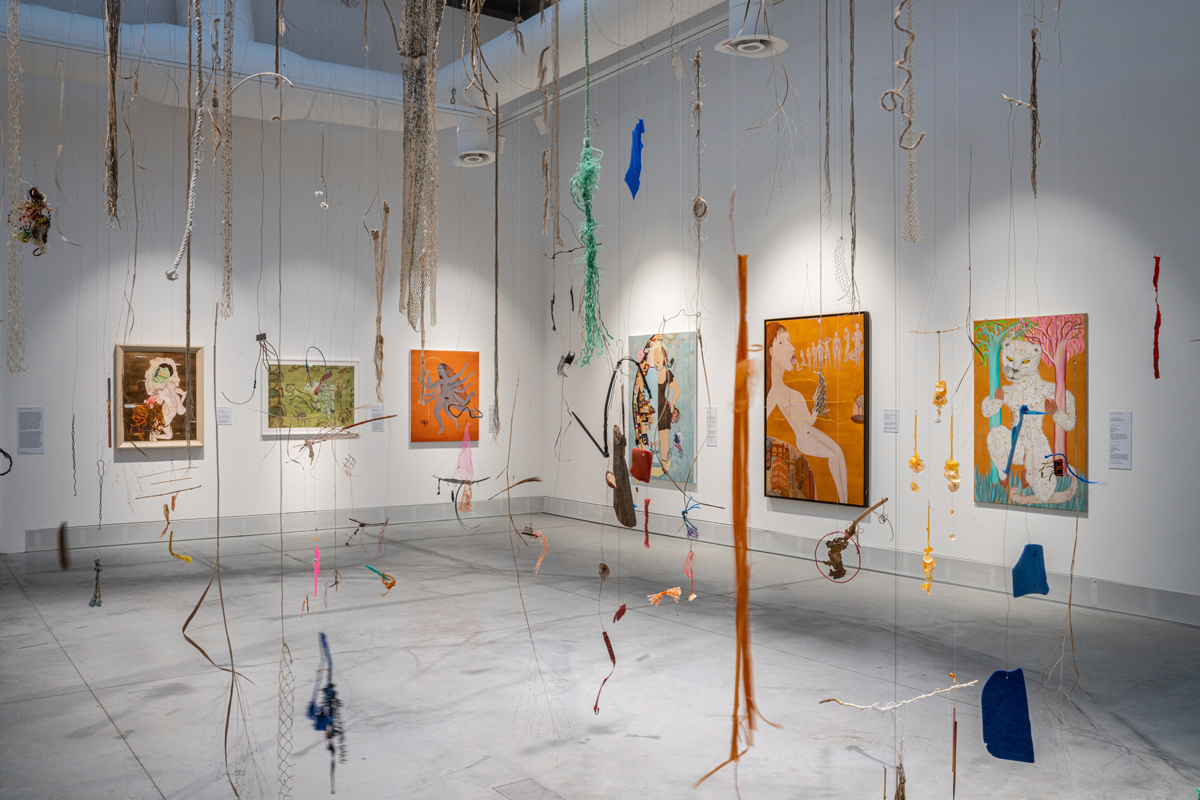 When Khristen cannot answer the question of the third life, her mother urges her to be imaginative, just guess, make something up, it’s a riddle. Khristen does not agree. It is not a riddle, she does not want to guess. Finally, the teacher offers an answer: “We all lead three lives. The true one, the false one, and the one we are not aware of. See how easy that was?” But it is not easy at all, this living, this life. We cannot see what we cannot see. Yes, art can be an ameliorative force, and yes, you can be whatever you want. In your dreams.

Emily LaBarge is a writer based in London. She has written for Artforum, Bookforum, the London Review of Books, Granta, and the Paris Review, among other publications. She is writing a book about trauma and narrative.