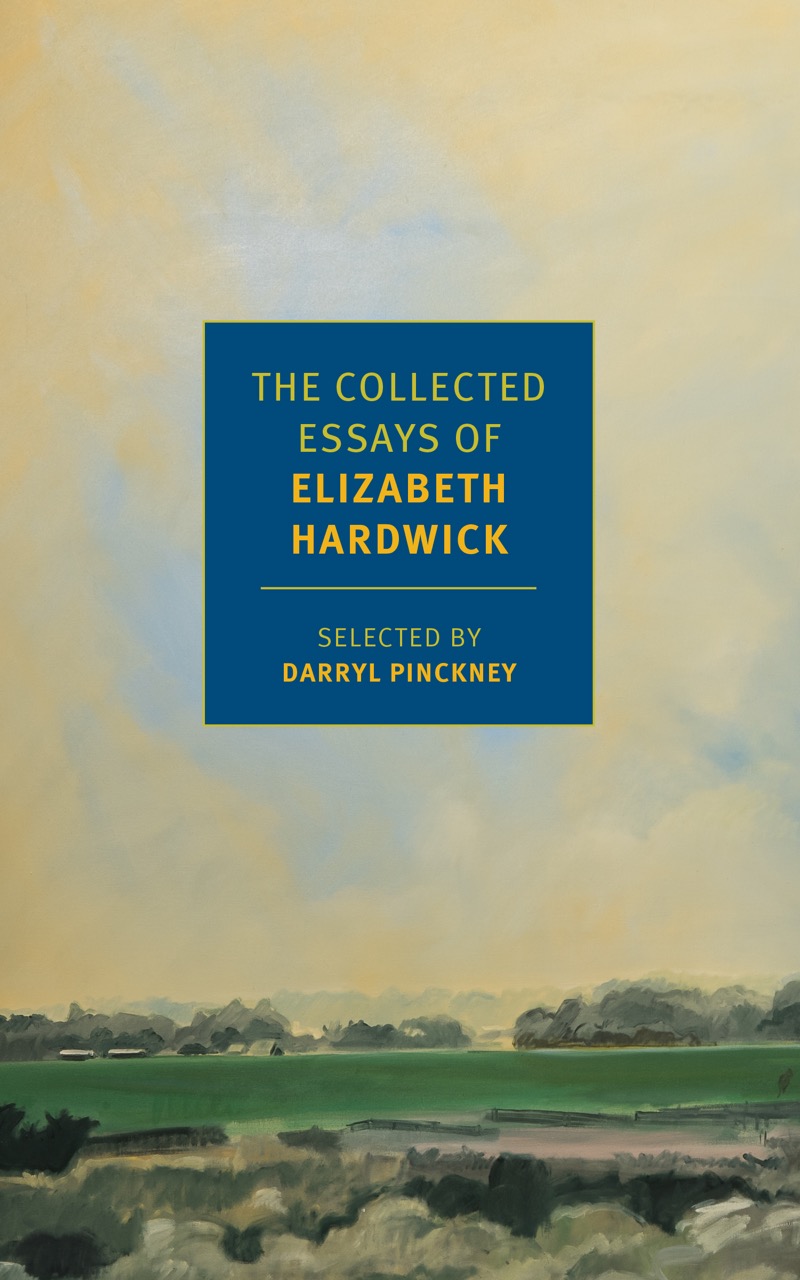 The truth of Oscar Wilde’s assertion that criticism is “the only civilized form of autobiography” is corroborated by The Collected Essays of Elizabeth Hardwick. This wide-ranging anthology, selected by Darryl Pinckney, acquaints a new generation of readers not with the story of Hardwick’s life but with the style and shape of her consciousness—what Wilde called “the spiritual moods and imaginative passions of the mind.”

Elizabeth Hardwick: the name itself evokes her impressionistic prose, as stately as a royal ship yet as unpredictable as the churning sea.

Kentucky born and educated, Hardwick, who dropped out of Columbia grad school to pursue writing, fell in with the Partisan Review crowd after publishing her first novel, The Ghostly Lover, in 1945. A keen, idiosyncratic critic of literature, theater, and the culture at large, she became a card-carrying member of the New York intelligentsia. But she never lost sight of the rest of the nation, even after years of operating from her Manhattan perch at the New York Review of Books, which she and her husband, the poet Robert Lowell, helped found. Although she kept a hand in fiction writing (Sleepless Nights, her 1979 novel, is her most memorable), Hardwick, who died in 2007, owes her enduring literary reputation to the way she reinvigorated the contemporary American essay, rescuing it from tone-deaf academics, harried journalists, and all the other professional scribblers lacking the conviction of the literary calling.

Arranged chronologically rather than thematically, this collection is admittedly a bit of a grab bag. The selection of pieces invites second-guessing (no theater writing, nothing from Seduction & Betrayal: Women and Literature, the inclusion of one too many meditations in need of circumscription). And the lack of contextual material (other than the breezy introduction by Pinckney, who was a student of Hardwick’s, and a list of sources) compounds the challenge posed by Hardwick’s habit of beginning an article as though she were in mid-conversation with her editors the morning after a combative dinner party gave her no choice but to take up the subject.

But with several of Hardwick’s essay collections out of print, this volume offers a welcome counter-model in our age of hot takes and microwaved analyses. Hardwick’s great gift as a critic is her ability to respond to an author in the language of literature, to spin her own luxurious tale about storytellers and their work. Over the years I have found myself returning to Hardwick’s criticism not to deepen my understanding of Herman Melville, or Edith Wharton, or Henry James, but to discover what Hardwick herself thought of these writers. Or more precisely, how she thought about them. The curve of her mind bends away from received opinion. Her essays take shape as dissenting correctives, dryly mocking the erroneous assumptions of scholars and biographers while delighting in the subversive truths of artists.

Hardwick’s method is discursive, often dizzyingly so in her mix of courteous Southern languor and unflinching New York velocity. She doesn’t so much prosecute a case as probe it from vulnerable angles. Large topics interest Hardwick more than small. She prefers an aerial survey of the cultural landscape (the state of the novel, civil rights protests in the South, the wives of famous writers, the provincialism of Boston) to the scholar’s inspection of a small parcel of ground. She retells with incisive delicacy the plots of such cherished fictions as James’s Washington Square and Melville’s “Bartleby, the Scrivener,” but her wider explorations of the literary firmament are curiously light on quotation. A walking library with a lifelong disdain of pedantry, she keeps her close reading to herself.

Abstraction and an overreliance on zeitgeist diagnostics can occasionally hinder Hardwick’s clarity, especially when sentences of Jamesian indeterminacy make uncertain forays into sociological fog. The 1978 essay “Domestic Manners” takes some time to come into focus. Hardwick begins by asking, “How are we living today?”—a question that opens the floodgates for rambling generalizations. But she hits her stride once she zeroes in on her generational target: “Sex, sex—what good does it do anyone to ‘study’ more and better orgasms, to open forbidden orifices, to experiment, to put himself into the satisfaction laboratory, the intensive care ward of ‘fulfillment.’ ” No prude (as her delight in the publication of Hart Crane’s louche letters attests), she was simply averse to cultural soft-mindedness.

Progressive but never doctrinaire, Hardwick reports on the Selma marches of 1965 and notices the fear in the eyes of police officers who are more threatened by “the smiles and a spreading comradeship” of the marchers than by the danger of civic unrest. Her familiarity with the South compels her to remark that the crisis “reduces the landscape to genre” just as her membership in the East Coast elite forces her to acknowledge that the “intellectual life in New York and the radical tone of the thirties are the worst possible preparation for Alabama at this stage of the Civil Rights Movement.” The moment belongs not to “beatniks and hipsters and bohemians,” but to “good, clean, downright folk in glasses and wearing tie clasps.” If Hardwick were on Twitter (preposterous thought), she would troll her own followers.

Yes, she could be exasperating. In “The Subjection of Women,” Hardwick questions Simone de Beauvoir’s assertion that biology is not destiny: “Any woman who has ever had her wrist twisted by a man recognizes a fact of nature as humbling as a cyclone to a frail tree branch.” Feminists weren’t pleased, but Hardwick was incapable of falling in ideological line.

Verdicts, the reviewer’s raison d’être, are a side note for her. A book she finds unworthy is dispatched for more far-reaching concerns (the fate of character psychology in the age of postmodernism, the biographer’s clumsy conflation of art and life). Criticism, which she saw as an imaginative act, justifies itself through aesthetic texture, originality of vision, perceptiveness, and grace. “Book reviewing is a form of writing,” she stresses in “The Decline of Book Reviewing,” her 1959 cri de coeur, in which she denounces, with bridge-burning brio, the lack “of the literary tone” in the better Sunday papers.

Hardwick’s own flamboyant sentences are choreographed to amaze with their kinetic punctuation (the scene-stealing colons, the ironic quotation marks), droll metaphors, recondite vocabulary, and relaxation of formality with insouciant asides. Her flair was at its finest when describing another author’s fiction. Here she is on hapless Homer Simpson from Nathanael West’s The Day of the Locust: “Old as he is, he’s like a child left in a gas station toilet while the parents, thinking him in the back seat, drive away.”

By maintaining the novelist’s prerogative for vivid portraiture, Hardwick made criticism sing. Her essays—written not so much to convince as to tantalize, challenge, and awaken—reveal the quicksilver movements of a mind always in pursuit of greater subtlety.

Charles McNulty is the theater critic of the Los Angeles Times. He teaches playwriting and dramaturgy at the California Institute of the Arts. A former critic and editor for the Village Voice, he has taught at Yale, NYU, and Brooklyn College, where he was the director of the MFA program in dramaturgy and theater criticism.