Poignant affection and the mysterious limits of familial bonds permeate a debut film about a father and young daughter on holiday in Turkey. 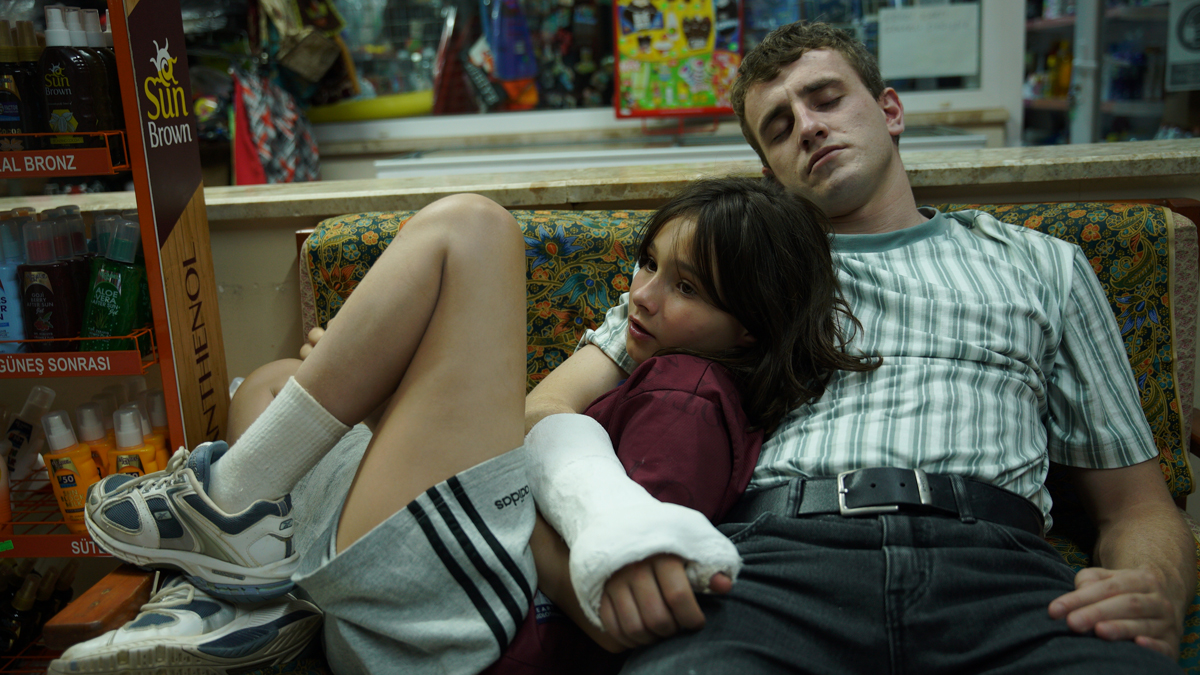 Few creatures are as watchful as an eleven-year-old girl. Confronting a fresh, if not final, brink of self-consciousness, her gaze narrows onto various states of rearrangement, the shuffling of the world into new sets and hierarchies of information. This is urgent, dutiful work, its rewards less clear than the sense of what they will displace. She looks in search of evidence, to gain purchase in a gathering mystery, and because some poised and budding part of her knows: soon there will be no watching without the ambivalence, at best, of being seen. 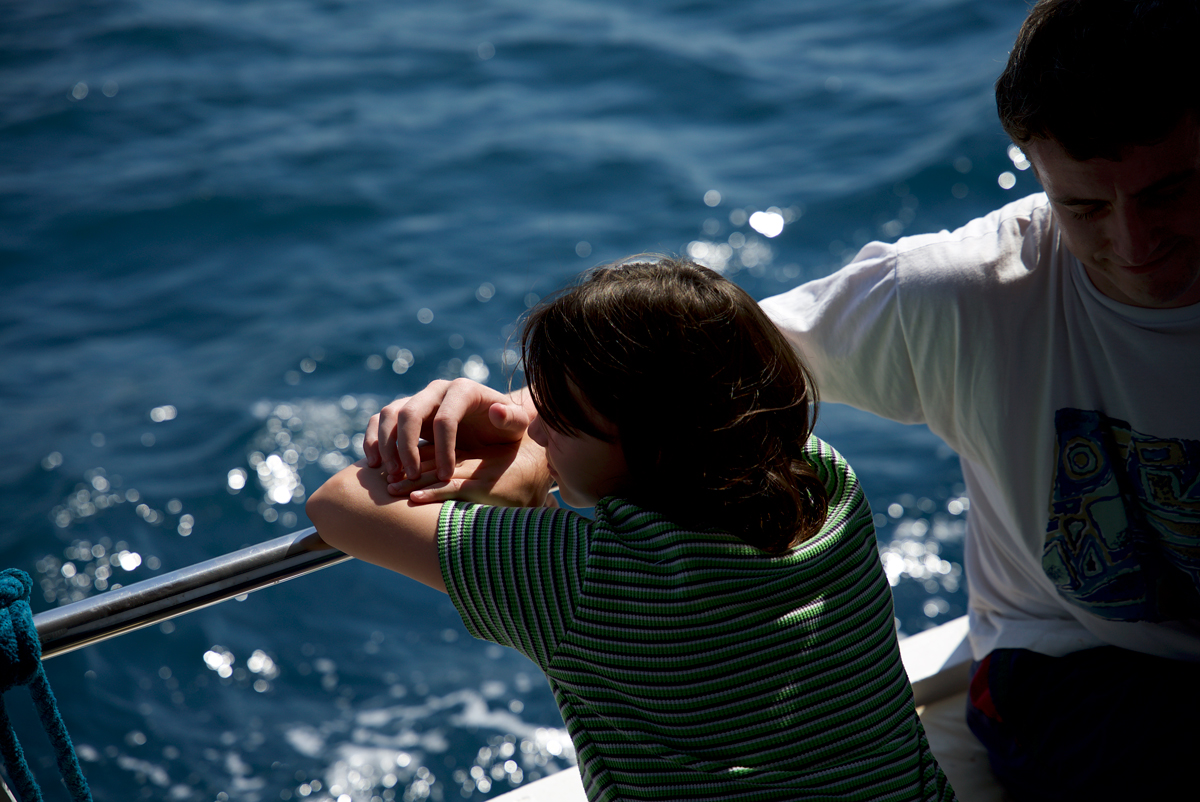 Such, in part, is the predicament of young Sophie (Frankie Corio), the eleven-year-old girl at the center of Aftersun, the debut feature from Scottish writer-director Charlotte Wells. At the Turkish holiday spot where she is spending a week with her dad, Calum (Paul Mescal), we hang close to Sophie as she navigates both the confines of a third-tier resort (overrun with fellow UK vacationers) and the terms of her relationship with a father young enough to be mistaken for her older brother. The film opens with the whir of a lens rearing in and out of focus, then the silhouetted, pixel-soup image of Calum in their mousy hotel room. Sophie, who lives in Glasgow with her mother, trains a camcorder on her dad, who has left Scotland for London, as he shows off some old-man moves. The tone is breezy, solicitous, their dynamic apparently honed over numerous absent-dad adventures not unlike this one. It is the late nineties, as a soundtrack spiked with pre-millennium Brit-pop hits will make clear. The mood darkens only when Sophie asks Calum who he had imagined he would be at thirty-one when he was her age. The daughter plays off her dad’s discomfort with the question, if she noticed it at all, then turns the camera on herself. 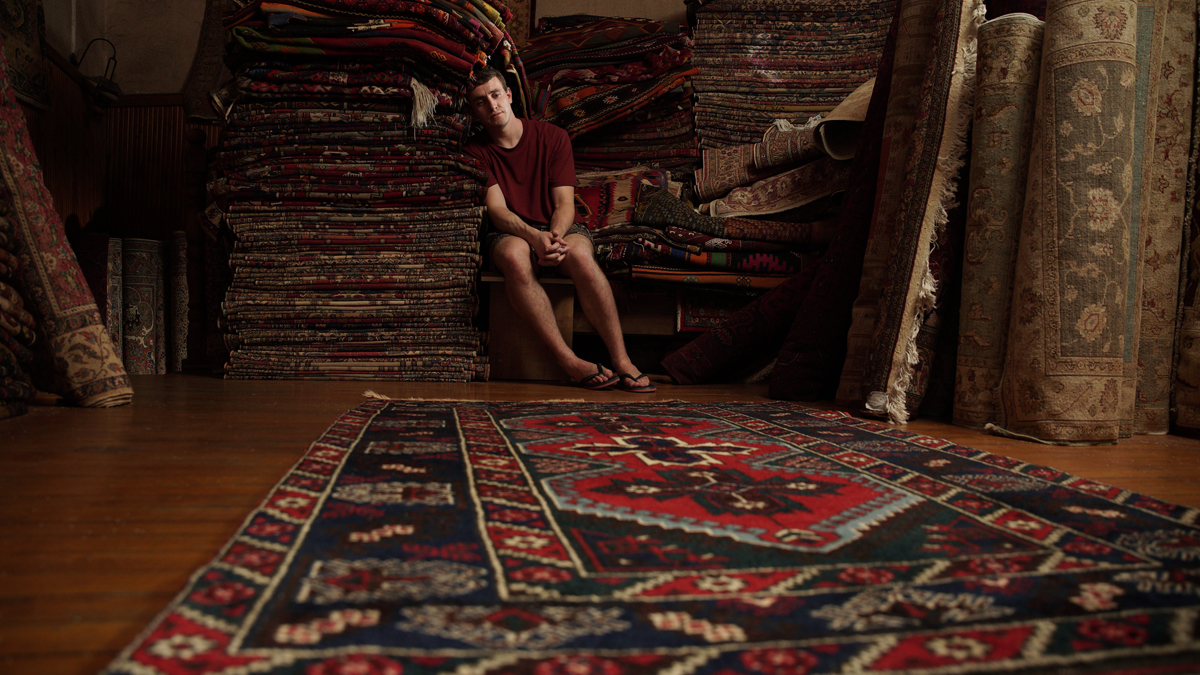 Paul Mescal as Calum in Aftersun. Courtesy A24.

Aftersun unfolds in diaristic style, each entry building a sense of what lies beyond Calum and Sophie’s stint in ersatz paradise, the void from which these glimpses of a lost alliance and perhaps a lost love have been rescued. As with the opening, some of these moments are drawn from the camcorder passed between father and daughter throughout their week together, the degraded, forensic quality of the images lending poignance and a hint of dread to the bond they document. Others are implied to be reconstructed memories and imaginings of the adult Sophie (Celia Rowlson-Hall), who appears, in a handful of flash-forwards, to have hit the age Calum was on their trip. Our detective is ardent but not altogether reliable: in one “present-day” setting, a rave-scape of droning beats and fractured light, she sees her father’s blinking form dancing next to her, another club kid, an old friend. The act of deciphering only enlarges the already massive, flickering question mark shadowing Sophie: How close were father and daughter, how close could they be? What did she miss? 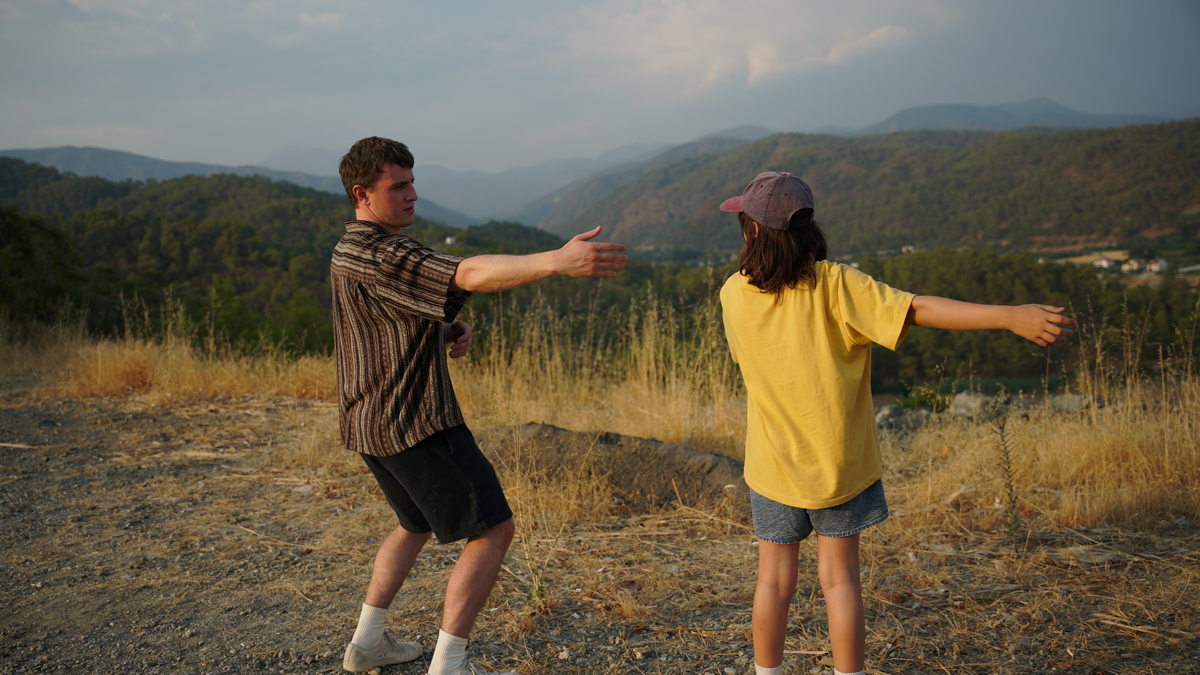 Paul Mescal as Calum and Frankie Corio as Sophie in Aftersun. Courtesy A24.

The desperation of the rave scenes set into deepest relief the pure, aimless pleasure Sophie and Calum take in each other during their Turkish retreat. That they are each leaning into particular roles—faux-cool dad and faux-sassy preteen—doesn’t undercut the connection those roles make possible. If the film’s lingering on their banter and confidences suggests anything, it’s that there may be no more viable way for a father and daughter to know each other than to develop complementary parts and then play them to the hilt. 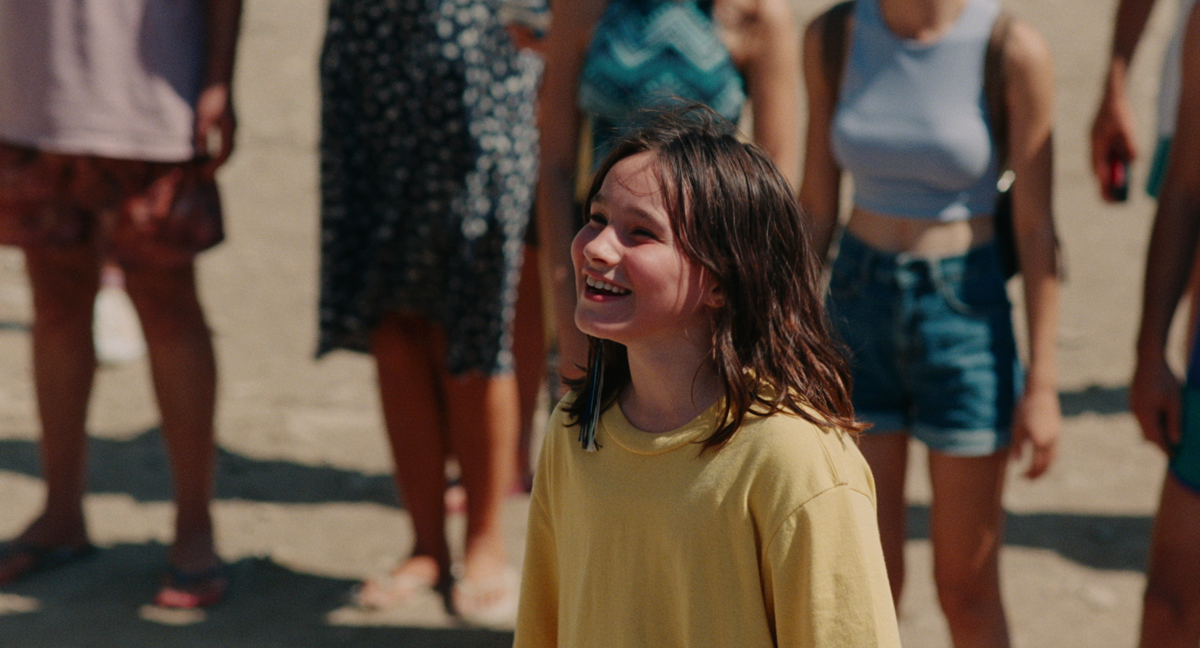 Frankie Corio as Sophie in Aftersun. Courtesy A24.

The limits of those parts, however, and that knowing, leap forward whenever Sophie and Calum are separated. In a progression of scenes we watch Sophie attach to a teenaged crowd, coolly observing their ways and pairings, their turns between childish play and pounding shots. Sophie also connects with a boy her own age, a largely silent affair that resolves, as both appear resigned it must, in a poolside kiss. Where the eleven-year-old grabs her moments of agency by both horns, without his daughter Calum appears adrift, then unsafe. Hints of whatever private agony he is managing—a crack about being surprised he made it to thirty, the tai chi and meditation books stacked around their room—culminate in his wandering off, despondent and alone. Locked out of their room, Sophie spends part of the night on her own in the hotel lobby before discovering him, passed out and naked, in her bed. 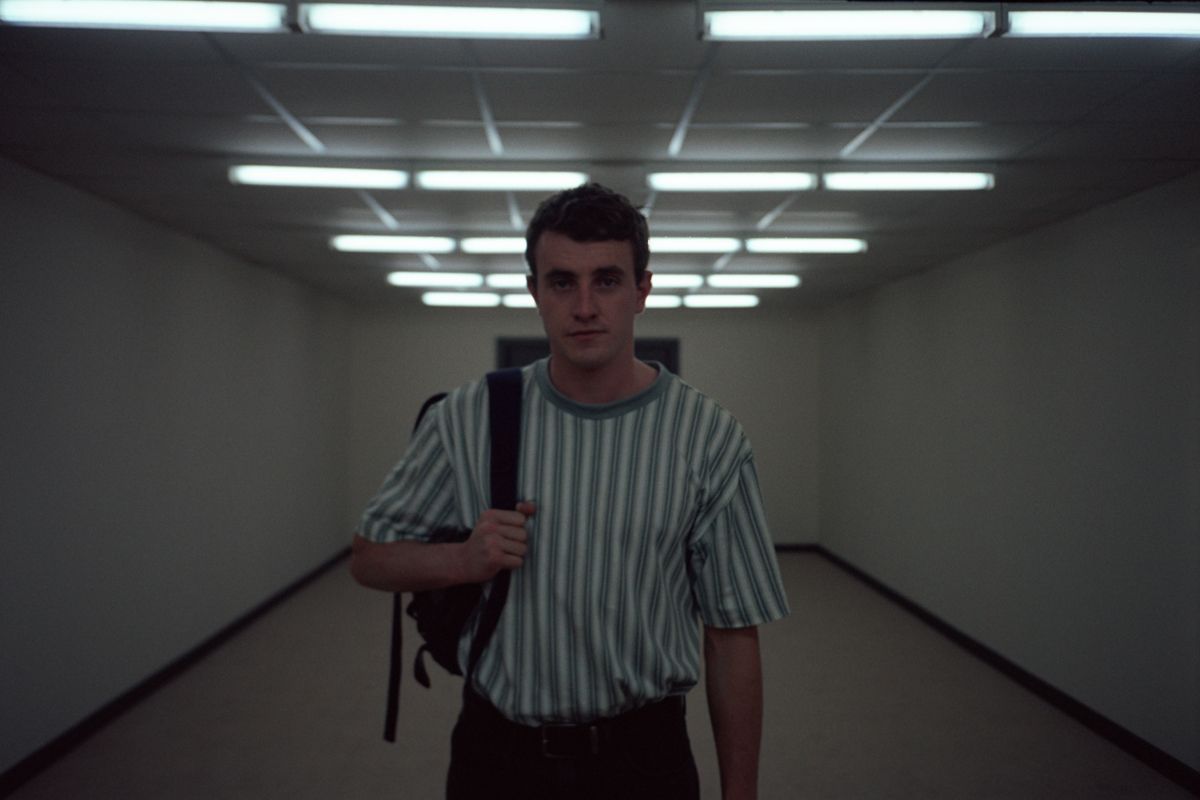 Paul Mescal as Calum in Aftersun. Courtesy A24.

Wells puts a determined stress on the enigma of Calum’s pain, and the inexorable breach between this odd couple. Where shots hold on Corio’s calm, absorbent face taking in the crude talk of some older girls in the bathroom or surveying the resort’s array of bonded pairs and nuclear families, Mescal rarely appears in full, up close, or for long. When Sophie, flopped out on the bed, complains of a vague, overstimulated malaise—“it feels like your bones don’t work, like you’re sinking”—Calum’s complex response is revealed in a bathroom mirror; the crosscuts and canny framing add to the scene’s striking, story-expanding effect. But I found myself wearying of the many clever ways Wells and cinematographer Gregory Oke devised to re-create visually—through ghost impressions, bisected frames, upside-down reflections—the idea of Calum as a cipher, solid yet ineffable. Watching another scene of Sophie and Calum chatting in their room, their images reflected in a mirror and a TV screen, I wished Wells had pushed against the limits she caresses to rich but repetitive effect here, had shown us more of what can be known about these characters—the binds between them and the blind alleys of memory—and less of what cannot. 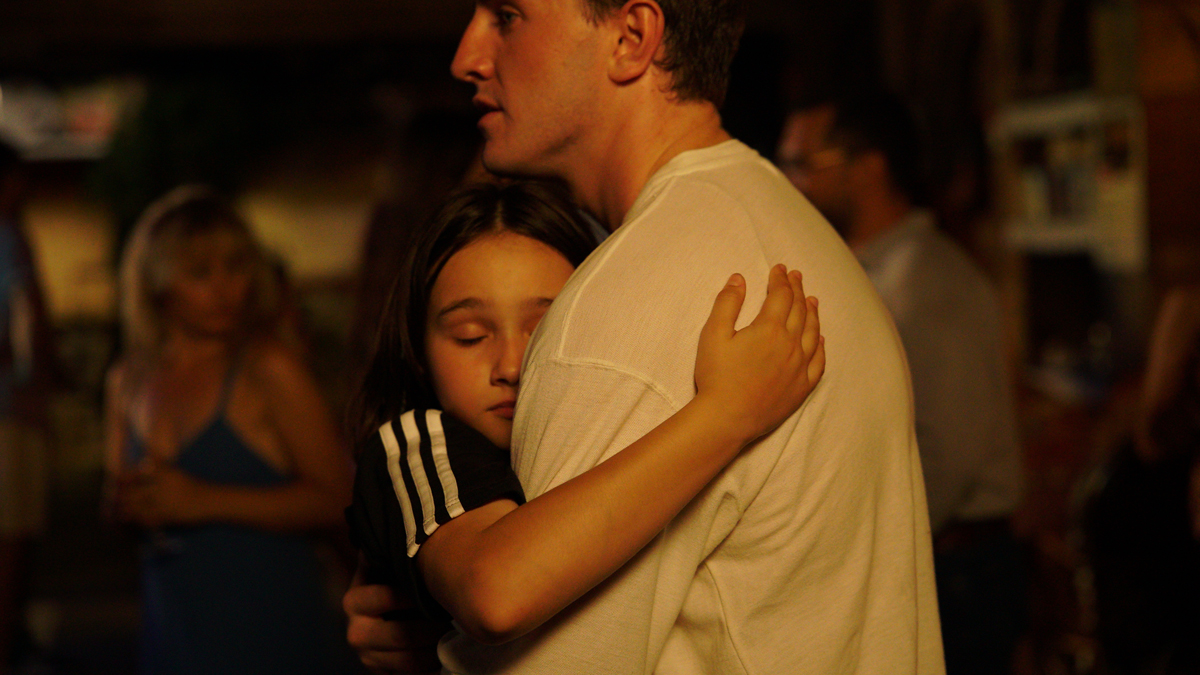 In a mood-forward film, the prevailing sense is one of girlhood taking its last untroubled breath. Among other things this means agreeing, for a little longer, to overlook all the things about your dad he would prefer that you not see. With her bright manner and assured but careful gaze, Corio captures the effort behind this agreement, a facade that corrodes before our eyes during a karaoke rendition of “Losing My Religion,” which Sophie, deserted by her father, must perform alone. If this is not a first taste of abandonment, by the end of the song Sophie has registered in it the portent of something awful, something new.

Michelle Orange is the author of This Is Running for Your Life: Essays, and the cultural memoir Pure Flame (both FSG).