Literature
The Seventh Function of Language

The death of the author: a detective hunts the truth of Roland Barthes’s demise in Laurent Binet’s inventive novel. 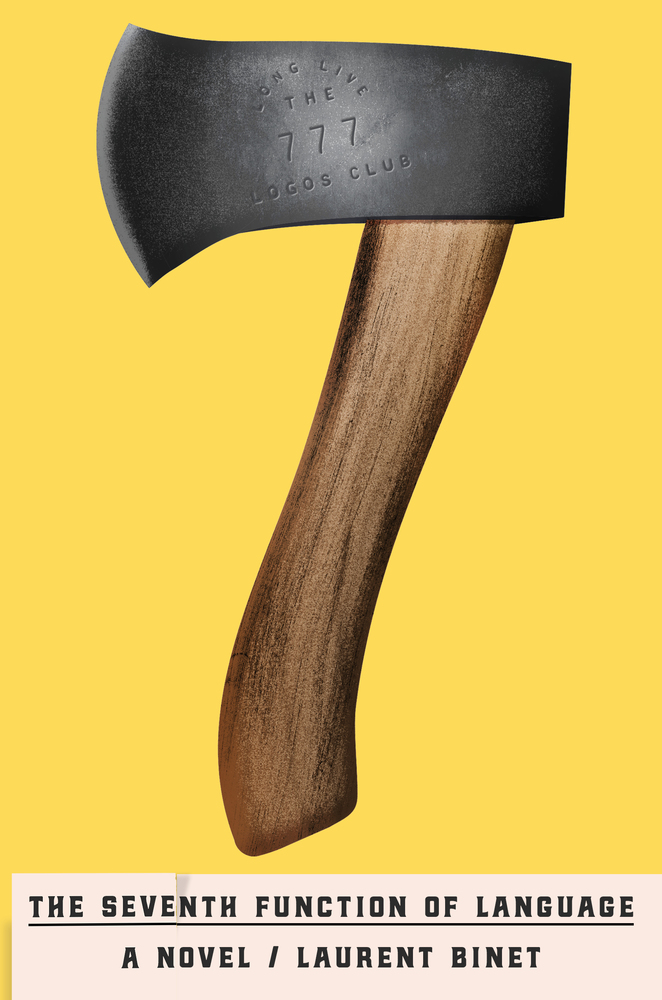 A truck, a Paris street, an absent-minded philosopher. On February 25, 1980, these disparate objects collided and fused into biographical fact: the semiotician Roland Barthes stepped off a curb near his Left Bank office and was hit by a laundry van. He died a month later in a Paris hospital.

For the resourceful French novelist Laurent Binet, though, Barthes’s death is not the ending of a work of biography. It’s the starting point for a fast-paced, wickedly clever work of fiction. In The Seventh Function of Language, Binet proposes that Barthes was not struck by accident. In biographical fact, he was on his way back from lunch with the Socialist presidential candidate François Mitterand. Was the van’s Bulgarian driver aiming for him? What about that dramatic visit in the hospital from his distraught fellow theorists Julia Kristeva and Philippe Sollers? (“Did Barthes have any enemies? Yes, lots . . . The Stalinists! The fascists! . . . Pierre Bourdieu!”) Was it a coincidence that Kristeva’s father, in biographical fact, was the head of the Bulgarian secret service?

President Giscard d’Estaing himself is concerned enough to assign veteran detective Jacques Bayard to the case. Bayard, Binet’s fictional invention, attends a lecture by Michel Foucault and decides he needs “a translator for all this bullshit.” He finds equally fictional young professor Simon Herzog, who illustrates the practical uses of semiotics by performing a Holmesian feat of deduction. “You fought in Algeria,” Simon tells Bayard. “You have been married twice; you are separated from your second wife.” Bayard drafts him on the spot as his assistant. Together the two imaginary gumshoes set out to search for clues among the real professors and psychoanalysts who, at that glorious, feminist, deconstructionist moment, made up the French academic avant-garde.

One of the lessons Binet has taken from critical theory is how to strip literature of its illusions, exposing its conventions and devices like the ducts of the Centre Pompidou. In his 2010 debut novel, HHhH, he challenged the terms of historical fiction, narrating the 1942 assassination of Nazi leader Reinhard Heydrich from the point of view of an author who puts himself into the story (“I’m spending a few days on vacation in a beautiful house in Toulon, and I’m doing a bit of writing”) and warns us of the limits of his knowledge: “I have never assassinated anyone, but I suppose there is no such thing as ideal conditions.” In The Seventh Function of Language, Binet incorporates the lives and ideas of the critical theorists to question the founding lie of biography and naturalistic fiction: the notion that the reader can be party to another person’s intimate affairs. “Hard to imagine what Julia Kristeva is thinking in 1980,” the narrator comments, intervening in the third-person tale. Then he tells us what, according to him, is on her mind.

Similarly, Binet cuts from character to character, real and fictional, to picture what they might have been doing as the evening news announces Barthes’s death: Giscard signing documents, a North African gay prostitute searching for his other sock, Sollers shouting to Kristeva in the kitchen, Bayard ironing a dress shirt, Deleuze picking up the phone to call Guattari. At the same time, he shows off his meticulous research and his faithfulness to history. With an ironic nod to the current fashion for novels set in the 1970s and 1980s, he incorporates real events, some trivial (tennis matches, the Rubik’s Cube fad), others tragic, as when Bayard and Simon’s interview with Umberto Eco at the Bologna train station ends with the waiting room being demolished (in historical fact) by a terrorist bomb.

All this is grafted onto a pastiche of a thriller, with comedy and car chases to keep the reader going, along with guessing games about what’s fact and what’s fiction. (You don’t need to know much about semiotics, since Binet does a fair amount of explaining as he goes along.) Other writers’ characters turn up, figures from Tintin comics appear, and the whole affair often reads like a sendup of The Name of the Rose or a highbrow Da Vinci Code. An important role is played by a Danbrownesque secret society called the Logos Club, whose members believe that to master the spoken word is to rule the world. The MacGuffin is a missing set of notes by Barthes said to reveal the “seventh function” of the title. This hypothetical mode of speaking is so persuasive, Eco tells the two detectives, that if a rhetorician could master it his “power would be limitless. He could win every election, whip up crowds, provoke revolutions . . . build empires, swindle the entire world.”

But writing, for Barthes, was a much less certain enterprise. As soon as events are set down, Barthes argued, their relationship to reality begins to slip: “The voice loses its origin, the author enters his own death.” The Seventh Function confronts the reader on one hand with the power of language, and on the other with the author’s own hesitations, limitations, even indifference in telling the story. Binet’s narrator, for example, puts Simon in a Paris bar reading the paper, then leaves the reader to choose the bar. “I would situate the café on Rue de la Montagne-Sainte-Geneviève, but . . . you can put him wherever you like, it doesn’t really matter.”

At the denouement Binet is inventing so wildly that Bayard finds himself on the bottom of a three-way with Hélène Cixous and Judith Butler, while Jacques Derrida, on the point of learning the seventh function, is torn to pieces by wild dogs. There’s only one way for Simon to escape: he pulls a Flann O’Brien, rebelling against the author who created him by choosing his own fate.

Perhaps not surprisingly, while the real people are brilliantly human in this shrewd and self-aware novel, the fictional characters aren’t given much substance. Simon, in particular, has no backstory, no motivation beyond sheer curiosity for his sleuthing. The Seventh Function of Language is lovable, ingenious, and a great read. It would be even greater if it didn’t at times resemble a college kid using his facility with ideas to cover up his emotional lack of a clue. There are many possible responses to this book, several of which are anticipated in the text. One of them is a remark by the ever-skeptical Bayard: “It’s a puzzle. Fucking intellectuals.”