Disharmony and distrust fill a writer’s days in a psychiatric ward. 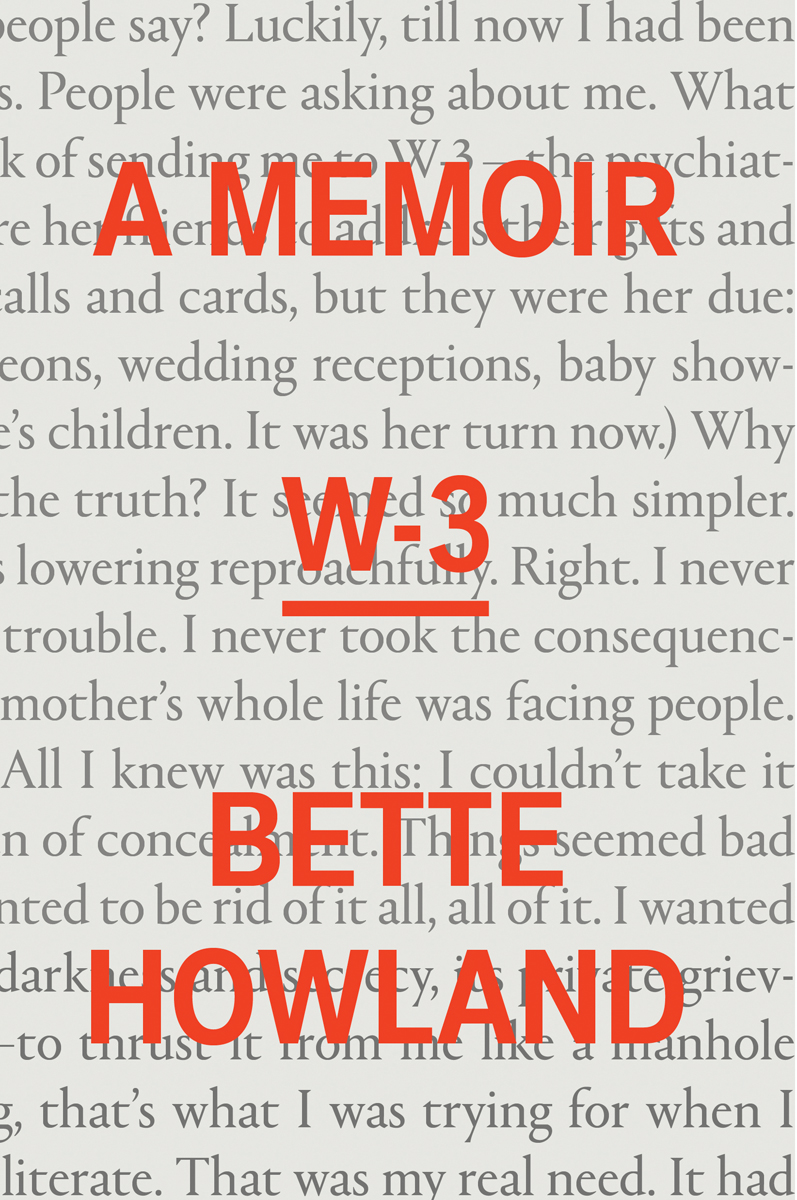 Like certain other writers on the edge of the canon—Jean Rhys, Elizabeth Smart, Tove Ditlevsen—Bette Howland wrote with an urgent dissatisfaction and narrative reluctance that make her work both slight and unforgettable. Howland’s disharmony with her circumstances, her options, and herself is the driving force of W-3, her 1974 memoir of her stay on a psychiatric ward. In it the author stakes a claim to importance with her bold, ironic sensibility and intense presence on the page—though without ever taking the greater risk of putting her history or her desire on view.

W-3 begins with a blast of noise and glare as Howland wakes up in intensive care after swallowing sleeping pills. She concentrates on the beep of a heart monitor and the sensation of tubes in her body, using physical detail, as she will throughout the book, to stand in for emotions that seem untrustworthy, or inadequate to the situation. Then she hears her mother whispering in her ear: “It’s all over now, it’s all behind you. You will start life anew.”

Howland doesn’t share her optimism: “The first feeling I experienced . . . in the first few moments of this, my new life, was a dim sense of disappointment. My desires seemed lacking, shopworn, powerless, passionless.” The thought of a new start exhausts her, though she wants nothing more than “to abandon all this personal history—its darkness and secrecy, its private grievances, its well-licked sorrows and prides—to thrust it from me like a manhole cover.”

This absence of Howland (1937–2017) from her own book is frustrating, but it’s also her point: she can’t imagine a life in which she could be the main character. As a promising young writer, she received encouragement: Saul Bellow was a mentor, and her work was recognized with a Guggenheim fellowship and residencies at MacDowell and Yaddo. Yet W-3 and two books of short stories represent most of her output, all of which went out of print during her lifetime. (Reissued last year, W-3 is now coming out in paperback; a story collection, Calm Sea and Prosperous Voyage, was published in 2019.) The ways in which single motherhood decentered her and kept her from writing feel like the heart of her story, yet in W-3 they’re what she’s least able to make sense of, or least willing to reveal.

Instead, she writes what she sees: the ward, with its dead houseplants, thumbed magazines, plastic armchairs; the oppressively hopeful doctors; and especially the community formed by her fellow patients, a subculture whose rules she is always trying to fathom. With skill and sensitivity, she portrays characters like Elke, kind, brilliant, suicidal, her hands covered in rash from her work as a research chemist; and Zelma, a repeat visitor who arrives imperiously with suitcases full of clothes and smokes joints on the sly. The running gag of W-3 is that the residents are expected to band together in a supportive group, but no one wants to think they belong. After all, not being “crazy” like the others is essential to getting out, although a return to one’s individual suffering hardly feels like sanity.

Howland delivers her own individuality in tantalizing glimpses, writing of her working-class, Jewish upbringing and her escape to the University of Chicago at fifteen. A brief marriage is followed by a “howling postpartum depression,” mentioned but not further described, after the birth of her first child. Divorce relegates her to the “benighted condition” of single mothers in the 1960s: no money, no support, judgment from other women, predation from men who treat her as “fair game” (including a gynecologist who goes down on her on his examination table). A mysterious illness goes undiagnosed (in later years she was treated for MS). The rape and murder of her aunt, in Howland’s early childhood, has a crushing effect on her family.

It’s tempting to read Howland as a brilliant woman tangled in the web of patriarchal expectations; but there is no feminist reflection on art and madness in W-3. The plot of trauma and recovery that a contemporary reader might expect is similarly thwarted: whenever it seems about to unfold, Howland turns away from the fraught prospect of being herself to describe another drama on the ward. Epiphany and resolution finally arrive, late in the book, during a visit from an old friend who has become a successful businessman. He sneaks her out, buys her dinner, and tells her she should have more self-respect than to let the nurses push her around. “Once again I had been found wanting,” Howland sighs, feeling accused of a “malfunction of amour-propre.”

“You don’t belong there,” the oblivious friend continues, and he proceeds to give her a “pep talk” about her intelligence and talent. Wondering why his words feel meaningless, she’s struck with the thought that none of these qualities will save her. “You can’t take up arms against the outer darkness,” she tells herself. “You can’t rely on self, on argument, on rational persuasion. There is only one thing you really need to know. That it isn’t yourself.” When she leaves the ward, she is finally ready to reclaim her personality, “though it could never be of as much interest to me again.”

The most salient item in all the stories about Howland is her receipt, in 1984, of a MacArthur fellowship, after which she largely stopped publishing. The assumption is that she fell prey to impostor syndrome; who wouldn’t? Yet lack of confidence is not what characterizes Howland’s work. It’s more like an underlying assumption that she isn’t quite the right person: an anxiety of identity that first creates writers and then undermines them. It’s a second-guessing game, a frustrating inability to locate yourself on a mental map of what everyone else appears to be doing and thinking. (See Susan Sontag’s diaries, with their constant puzzlement about what others want of her.) In this sense, you can imagine Howland feeling among the MacArthur geniuses the same way that she felt on W-3: I don’t belong here, me with my burden of self and my shopworn desires.

Julie Phillips’s book The Baby on the Fire Escape, on mothering and creative work, will be published in April 2022.