In postwar Germany, a gay man’s confinement is a state of being. 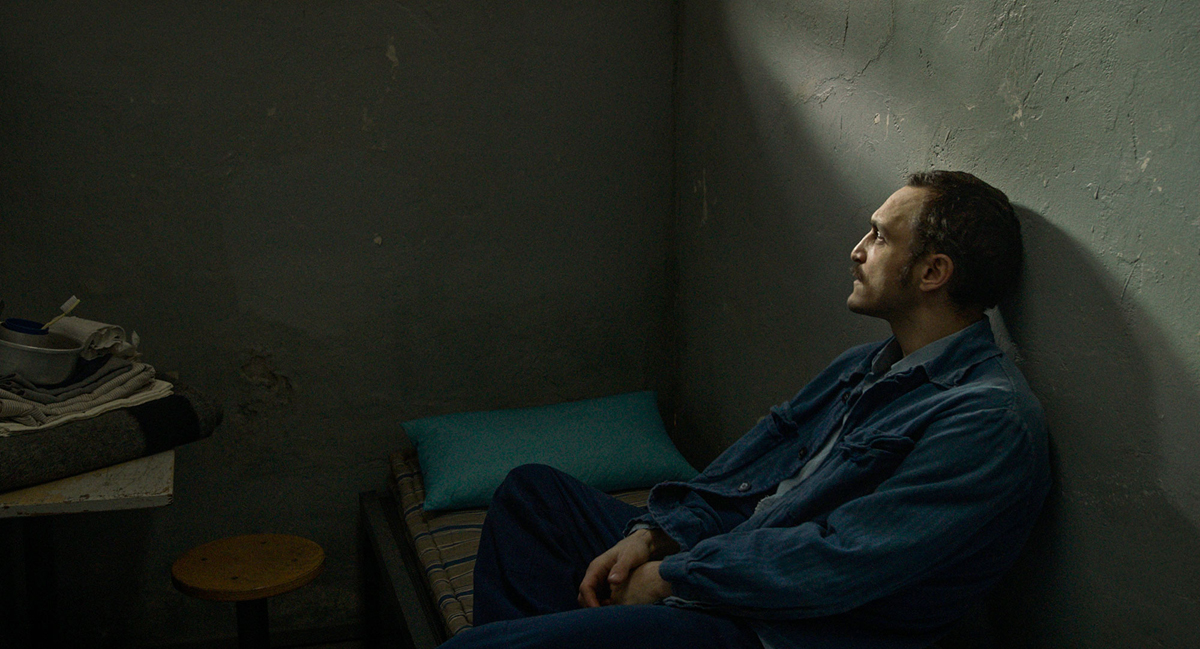 “Prisoner’s cinema” is a phenomenon that occurs when a person deprived of light or visual stimulation begins to see fantastic colors. For Hans (Franz Rogowski), the protagonist of Sebastian Meise’s sour postwar drama Great Freedom, a struck match, smuggled into the pitch-black cell where he spends an unspecified number of days in solitary confinement, seems to offer a riot of Technicolor splendors. Hans is a gay man repeatedly jailed for same-sexing, illegal from 1871 until 1969 under a provision of the German Criminal Code known as Paragraph 175. He is also subject to another kind of confinement: of being a hemmed-in character, one who serves as a blunt instrument in an inelegant history lesson. 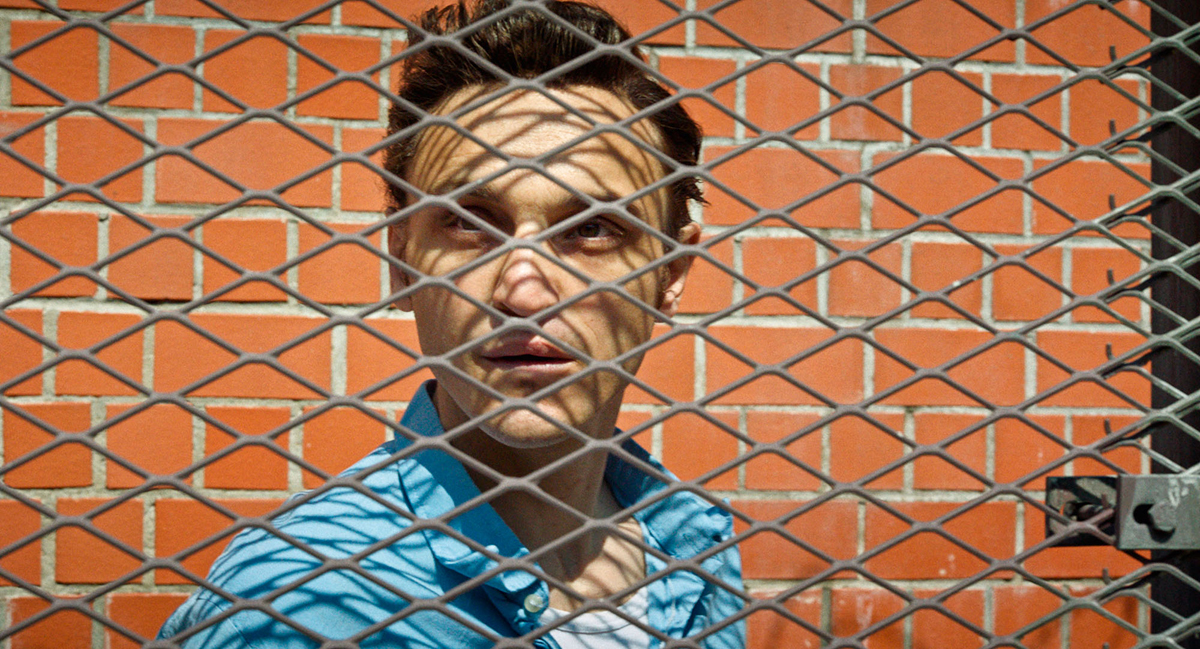 Great Freedom, Meise’s second narrative feature, which he cowrote with Thomas Reider, begins with surveillance footage—moving images that land Hans behind bars, a new spin on the meaning of “prisoner’s cinema.” This silent photo documentation, awkwardly interspersed with Great Freedom’s opening credits, reveals Hans and other men furtively, furiously engaged in various sexual acts and positions in a public bathroom, their eyes always fixed on the entrance. (This artless segment called to mind William E. Jones’s potent act of cine-archeology Tearoom, 1962/2007, a re-presentation of original footage shot clandestinely in a men’s public restroom by the Mansfield, Ohio, police in the summer of 1962 as part of a crackdown on gay sex in the Midwest.) Hans is sentenced to twenty-four months without probation. The year is 1968. 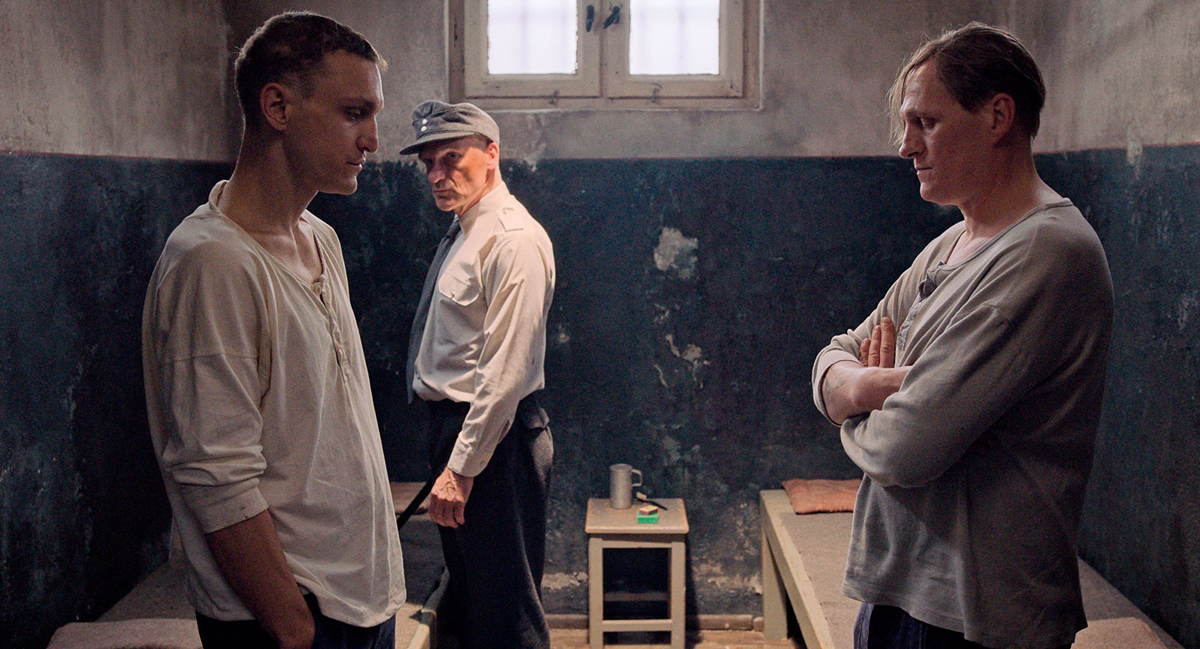 Stolid, silent Hans follows prison protocol without complaint, assuming the position required for an anal-cavity search before being commanded to. While on work assignment in the penitentiary—stitching pale-pink bedsheets—the impassive inmate shows a tiny flicker of excitement, having recognized an older guy with a long greasy ponytail as Viktor (Georg Friedrich), a convicted murderer and his former cellmate from 1945. Great Freedom will frequently toggle from 1968 back to that year and also to 1957, which depicts Hans serving yet another sentence for violating Paragraph 175—a go-round that finds the homophobic Viktor bartering sexual servicing from the gay inmate. 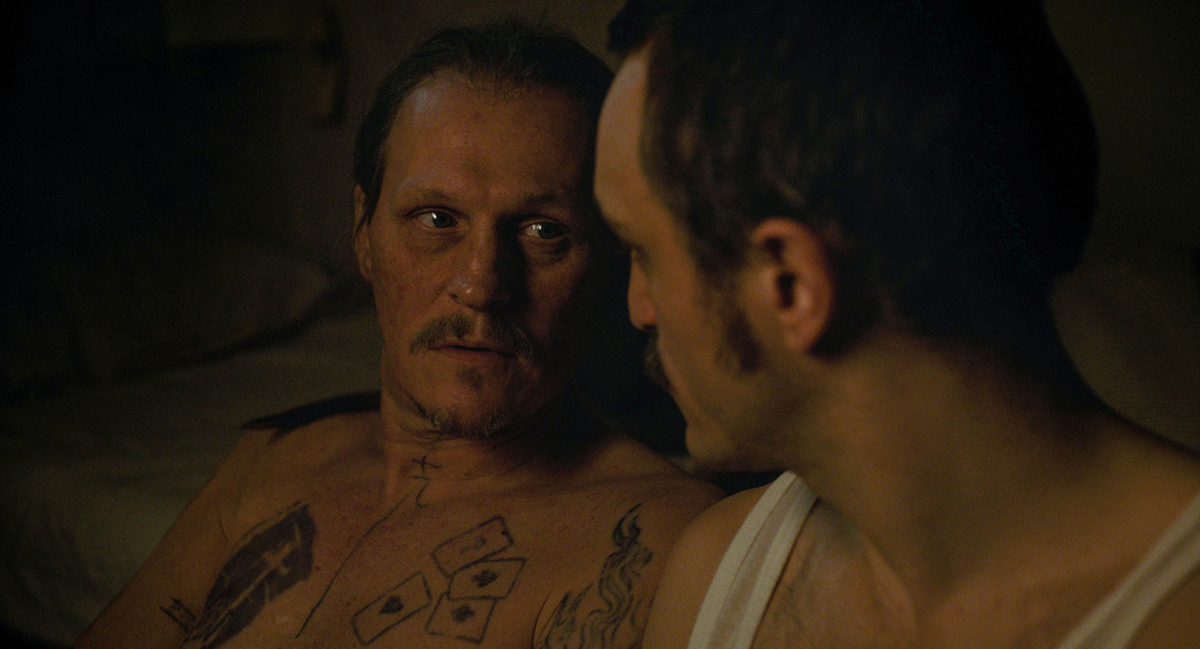 Often in each of these three date-stamped segments, appalling, perhaps lesser-known facts—such as that gay men deported to concentration camps by the Nazis were transferred directly to prisons immediately after World War II’s end to serve the remainder of their sentences—are worked into the dialogue. In 1945, Viktor, while inking a tattoo over the number indelibly imprinted on Hans’s forearm, learns that his “175er” cellmate has four months to go in an eighteen-month term. “They stuck you in jail straight from the concentration camp? Seriously?” he asks, his incredulity just one example of Great Freedom’s too-transparent didactics. (More subtle is the way that Meise, forgoing age-enhancing makeup and other ostentatious markers, has chosen to distinguish Hans and Viktor over a near quarter-century, using only the presence or absence of mustaches and hair length and style to situate viewers chronologically.) 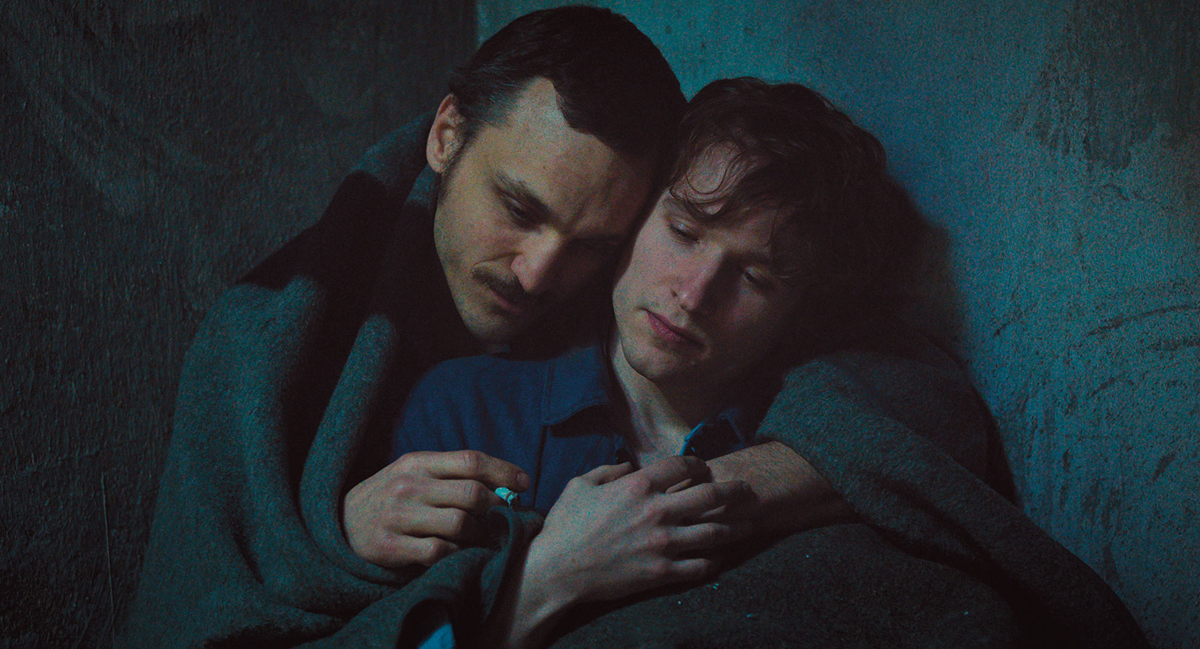 While the baleful legacy of Paragraph 175—the subject of a 2000 US documentary by Rob Epstein and Jeffrey Friedman, noted chroniclers of LGBTQ history—is parsed in Great Freedom, we learn little about the man so grievously affected by it. Asked by Leo (Anton von Lucke), a schoolteacher also incarcerated on the evidence of that surreptitiously shot footage, what he does on the outside, Hans replies, “This and that. Until it’s back to sewing again.” Although Leo’s a minor character, more attention is paid to fleshing out the details of his biography—the courses he teaches, the instrument he plays—than to the film’s persecuted protagonist. Even the 1957 section, devoted primarily to the ways that Hans tries to buoy the spirits of and stay in contact with his lover Oskar (Thomas Prenn), with whom he shared a home and who is imprisoned on another floor, fails to elucidate much about the principal character, focusing instead on melodramatic plot points. 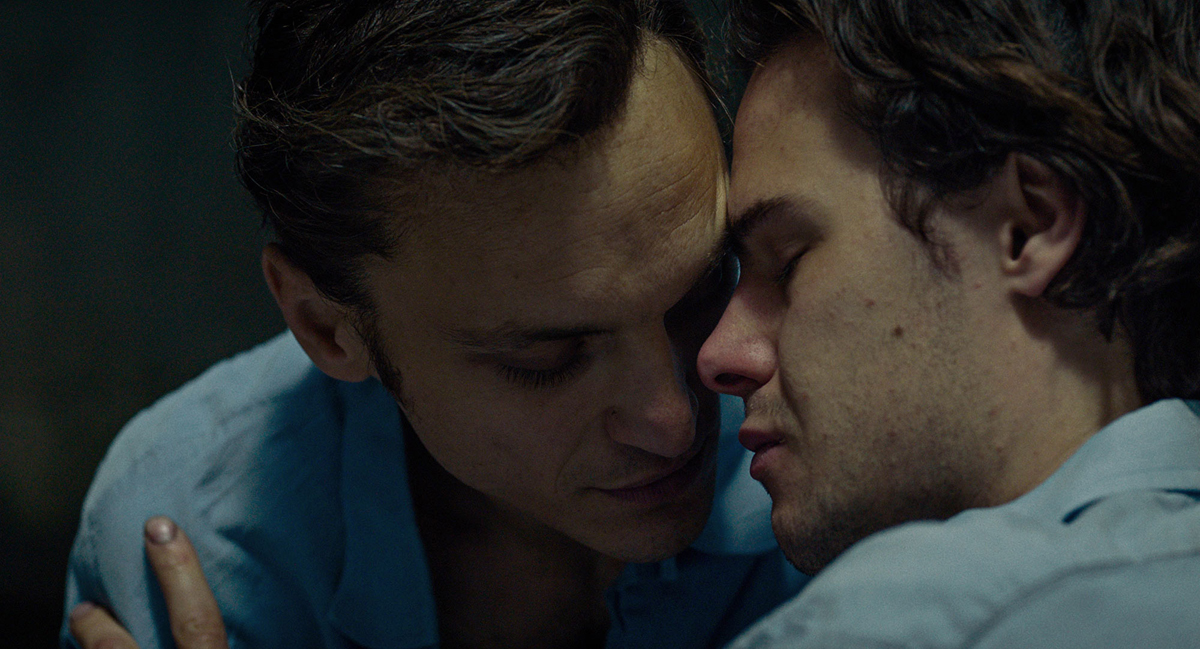 That Hans should remain such a blur is all the more disappointing considering that the actor who plays him was the main reason I sought out this film. Rogowski first came to my attention in Transit (2018), the first of two films he’s made to date with Christian Petzold, one of the most astute directors to explore historical rifts and traumas in Germany. Part of the actor’s appeal rests on his complex corporeality: the strength suggested by his taut, ropy body is softened by his cleft lip and lisp, both of which give him a touching vulnerability. A physically expressive, agile performer, Rogowski in Great Freedom always remains fascinating to watch, particularly in so many spatially restricted settings. But Hans has been conceptualized as not much more than a set of presenting symptoms, a man driven by the compulsion to repeat and by a warped attachment not only to his incarceration but to heteroflexible Viktor. The film queasily suggests that it’s not the barbaric system criminalizing Hans that is pathological, but Hans himself. Meise’s movie proposes the inverse of the title of Rosa von Praunheim’s ingenious, acerbic Brechtian soap opera from 1971: It Is Not the Homosexual Who Is Perverse, But the Society in Which He Lives. 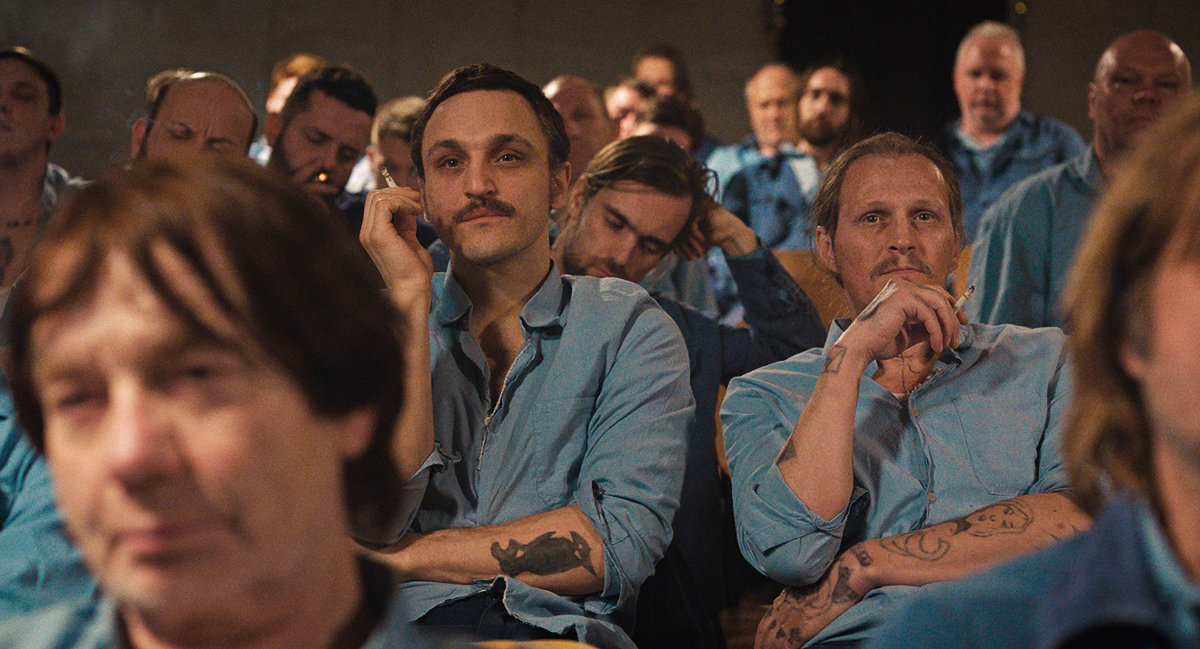 That notion especially animates Great Freedom’s closing segment, set in 1969, when a reform to Paragraph 175 means that Hans can be set free. (The provision would not be fully expunged from the German legal code until 1994.) He steps inside a gay club, whose glibly ironic name, announced in cherry-red neon, gives the film its title. He seems ill at ease, unaccustomed to this new liberty. (Maybe it’s the dark-haired twink with the obviously fake chevron mustache who cruises Hans that unsettles him or the club’s entertainment: a trio of middle-aged guys blaring free jazz.) In the boîte’s basement, Hans will take in explicit tableaux that transpire in makeshift cells. It’s too much stimulation. The ex-prisoner will long to leave this ersatz jail, this gay hell, for the real thing.