All about my occult mother: it’s family horror in Ari Aster’s debut feature.

Hereditary boasts its share of violent deaths, but it begins in the aftermath of a quiet one, represented only by an obituary notice, notably perfunctory in its phrasing, for a seventy-eight-year-old woman. The departed isn’t a character in the film, per se, though she remains in death a palpable presence, exerting a powerful pull on the surviving members of her family. There’s an adult daughter, Annie (Toni Collette), whose eulogy for her mother bespeaks unresolved anger; Annie’s husband, Steve (Gabriel Byrne, in vague and mournful mode); and their two children, son Peter (Alex Wolff), a high school stoner, and daughter Charlie (Milly Shapiro), an antisocial thirteen-year-old with a penchant for making morbid-looking dolls from found objects. Charlie’s creative streak comes from her mother, a professional artist who specializes in ultra-detailed autobiographical diorama miniatures. Following still another death in the family, however, Annie finds herself abandoning model-work to seek answers in the unknown, drawn toward finding solutions in spiritualism, a subject in which her own mother had dabbled. 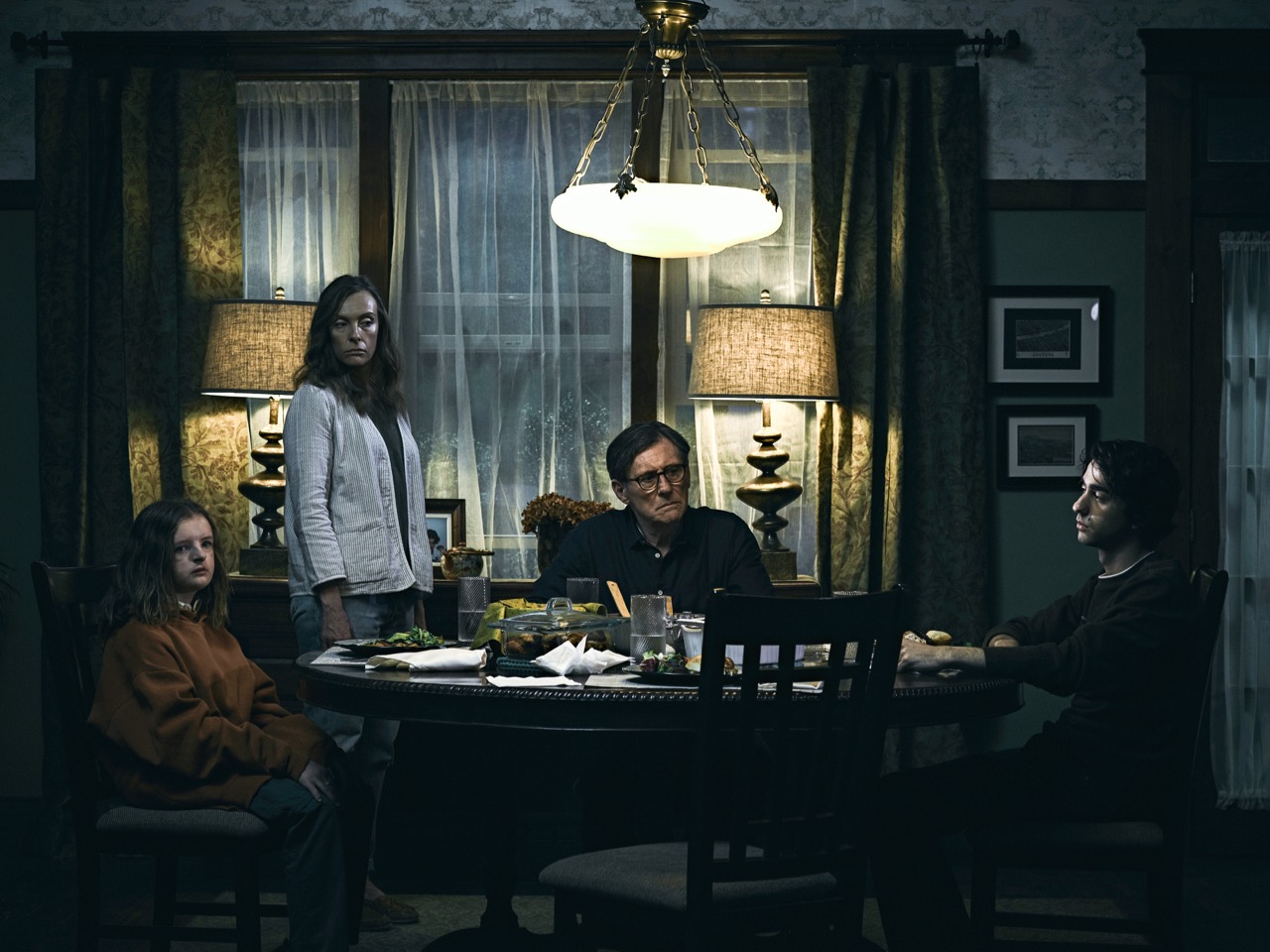 The film, which generated a degree of infamy during its world premiere at Sundance for its sustained sense of dread, is the debut feature of Ari Aster, who also wrote the screenplay. The script is a drum-tight piece of work in which no detail is wasted—an offhand mention of a nut allergy becomes a key plot point, and no severed head will ultimately go unexhumed. This near total absence of any extraneous material makes Hereditary almost predictable; when every piece of information doubles as portent, it’s not a matter of if but of how it will come back up. In some regards this suits Aster’s movie, in which, true to its title, bloodline is a kind of predestination. We know that fate is among Hereditary’s themes, because the movie resorts to the hack move of showing Peter in a classroom lecture that seems to comment directly on the plot—a discussion of free will prompts a response on the awfulness of characters in fiction being “all, like, pawns in this horrible hopeless machine,” an observation that’s directly relevant to Annie’s gradual sense of being manipulated by malevolent outside forces.

Chief among these forces is—as always, but here pointedly—the director himself. A clearinghouse of camera moves that’s the work of a restless prodigy of style, Hereditary is a movie that proudly displays the materials of its construction. Aster has made a film consisting of a great many, often clipped scenes, and he is loath to take an unfussy approach toward any of them, always working in a “hook” or something extra. At a funeral, the camera lowers in time with the distant casket, plunging beneath the level of the soil. Immediately afterward a scene opens cast in jaundiced yellow, the image warped—we later gather this has been Peter’s POV through a piece of stained glass. The audio element is also exploited for effect; one of the movie’s most potent shock effects comes through the continuing sound of the sawing of piano wire followed by a telling off-screen thunk. Multi-instrumentalist Colin Stetson’s soundtrack is as insistently present as the camerawork, and an abhorrence of dead air seems to be the organizing principle of the movie, which lays on ambient menace with a backhoe. 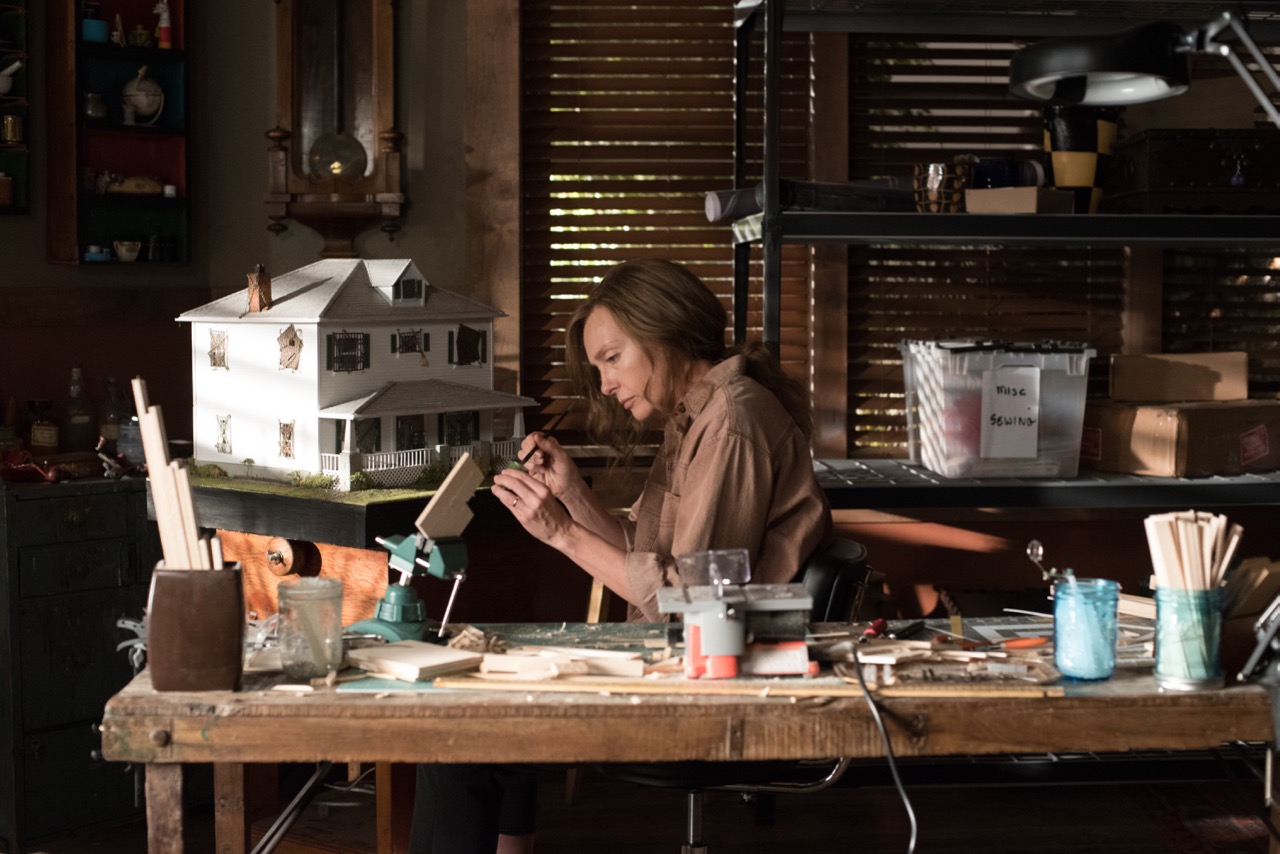 The mystery that Annie begins to unravel has to do with demon invocation, though Hereditary’s supernatural horror elements are anchored by a more commonplace horror: that of the family institution, a through-line of Aster’s young career. His 2011 short The Strange Thing About the Johnsons observes the end and after-effects of a long sexual relationship between a father and son, cultivated in the shadow of the middle-class family’s repressive quiet. Munchausen (2013), a dialogue-free short lampooning Pixar silent storytelling style at its most treacly, features a panicked soon-to-be-empty-nester attempting to keep her son glued to her bosom via poison and palliatives. In Hereditary, which fortunately finds Aster disabused of the notion that he’s a savage satirist, Annie’s latest series of dioramas depicts scenes that reflect a troubled relationship with her mother. In one, a young mom—presumably Annie—lies in bed nursing a newborn, while an older woman rushes in to proffer her own breast for the suckling.

Maternal instinct is aggrieved, amok, and totally awry in Hereditary, which finds Collette’s character blurting out the unspeakable to her son; her confession of having attempted to induce a miscarriage while pregnant with Peter does little to quash a growing suspicion among the men of the house that she harbors latent filicidal tendencies. Aster loves his sequence shots, but never sacrifices his actors for elaborate blocking, and Collette gives him a performance of forlorn conviction, every bit as fine in arpeggios of hysterics as in quieter scenes. She has a wonderful moment when, just a second after describing a family tragedy to a seemingly solicitous stranger played by Ann Dowd, she looks off into the distance with a few hard blinks, as though hearing herself speak the name of her loss aloud for the first time. 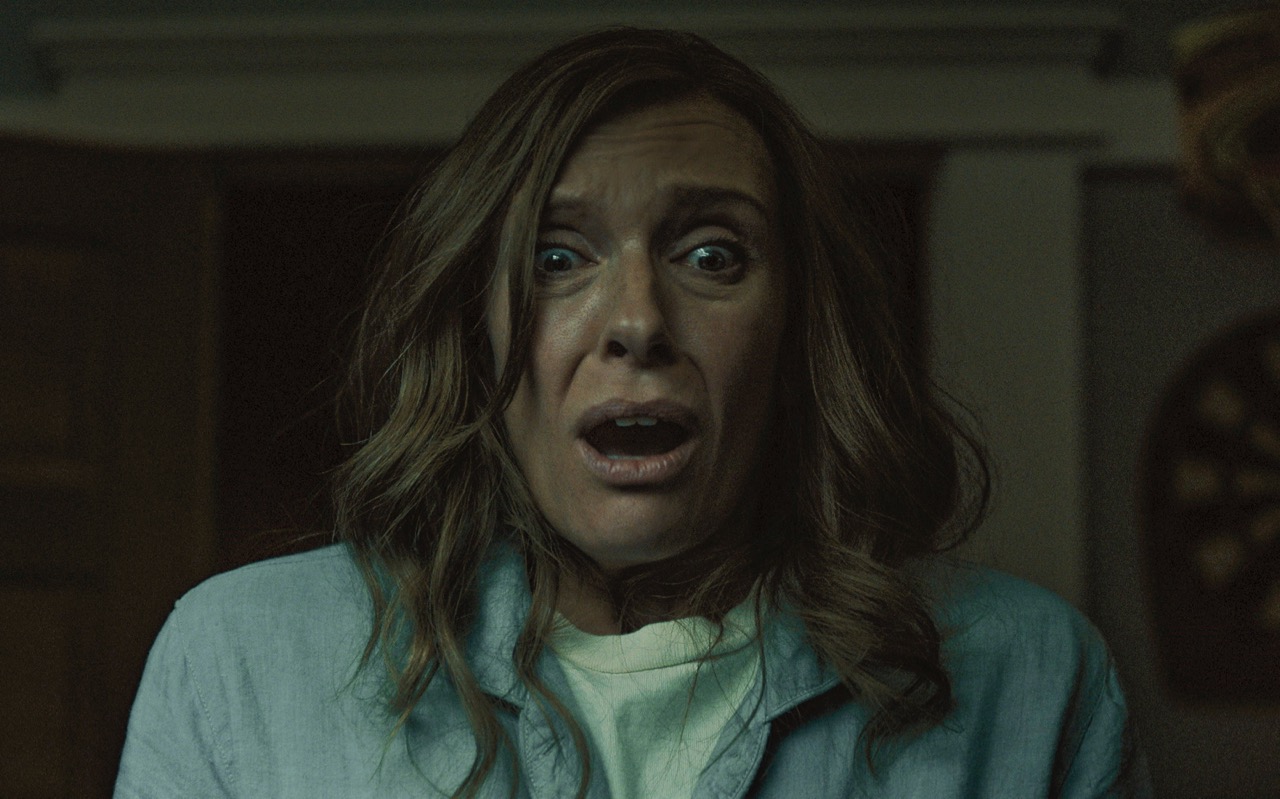 For much of the movie’s runtime, Aster plays a game of “Is she or isn’t she?” regarding Annie’s sanity. The question seems almost moot as Hereditary draws toward its close and the satanic conspiracy that she perceives as moving against her family tightens its net. Here it is difficult not to catch a whiff of tannis root and Roman Polanski’s Rosemary’s Baby (1968), and Aster makes little point of hiding his inspirations. Indeed, parceling out only fragments of exposition and explanation, he practically relies on an audience familiar with these kinds of occult yarns to do the work of connecting the dots, allowing him to concentrate on what seems to interest him the most, composing scenarios of ever-increasing cruelty to audience and characters alike. This trailing of expository allusions, as well as the genuinely disturbing buildup surrounding a wall-crawling figure hidden in the murky shadows, shows that the visually hyper-articulate Aster understands one important thing that any director working in the horror/thriller mode should: that the half-seen is more terrible than the big reveal. 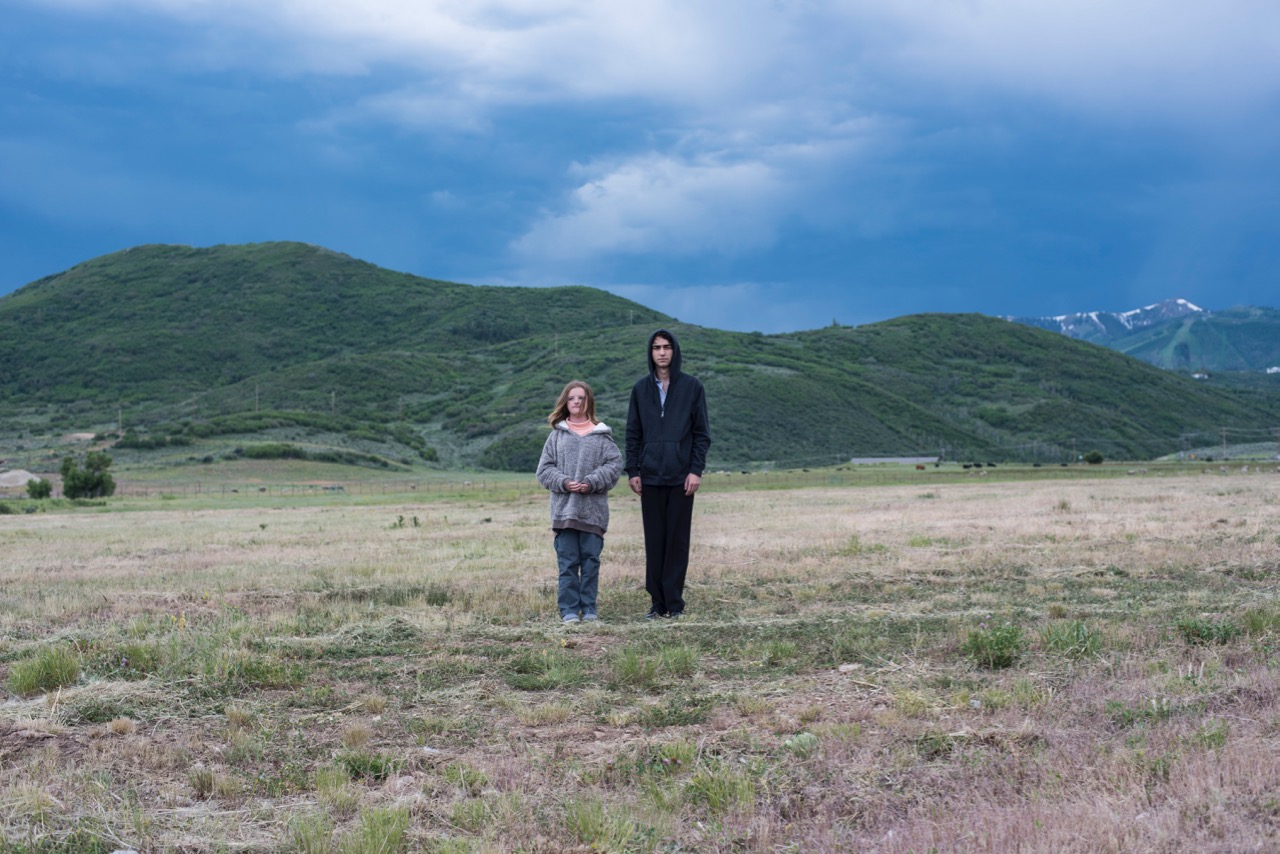 Unlike Polanski in absurdist horror mode, Aster doesn’t jump off from a baseline of accepted realism. He shows no ear for quotidian dialogue, and he sets Hereditary in a flagrantly constructed movie world that refers only incidentally to our own, an unidentified western landscape hemmed in by jagged mountains of madness and an old, dark house with Arts and Crafts accents that’s been meticulously designed down to the floorboards. There is justification for this bespoke set design, since Annie and Charlie and, incidentally, Annie’s late mother are all aesthetes, creator-surrogates pursuing their individual agendas within Aster’s larger construction, connected explicitly to Annie’s dioramas in bookending scenes that situate the movie’s characters—particularly Peter—as, yes, pawns in a horrible hopeless machine. This kicker is pompous and overreaching, sure, but charmingly so, with the swagger of a wiseass punk kid who’s skimmed enough books to make a play at the profound, or of Montag the Magnificent pondering the nature of reality in splatter-film innovator Herschell Gordon Lewis’s The Wizard of Gore (1970). Hereditary may have been adopted by prestige distributor and pedigreed genre specialist A24, but it is best at the moments when it shows a cur’s snarl, and the unmistakable imprint of its lowborn parentage.