Nonfiction
A Year with Swollen Appendices 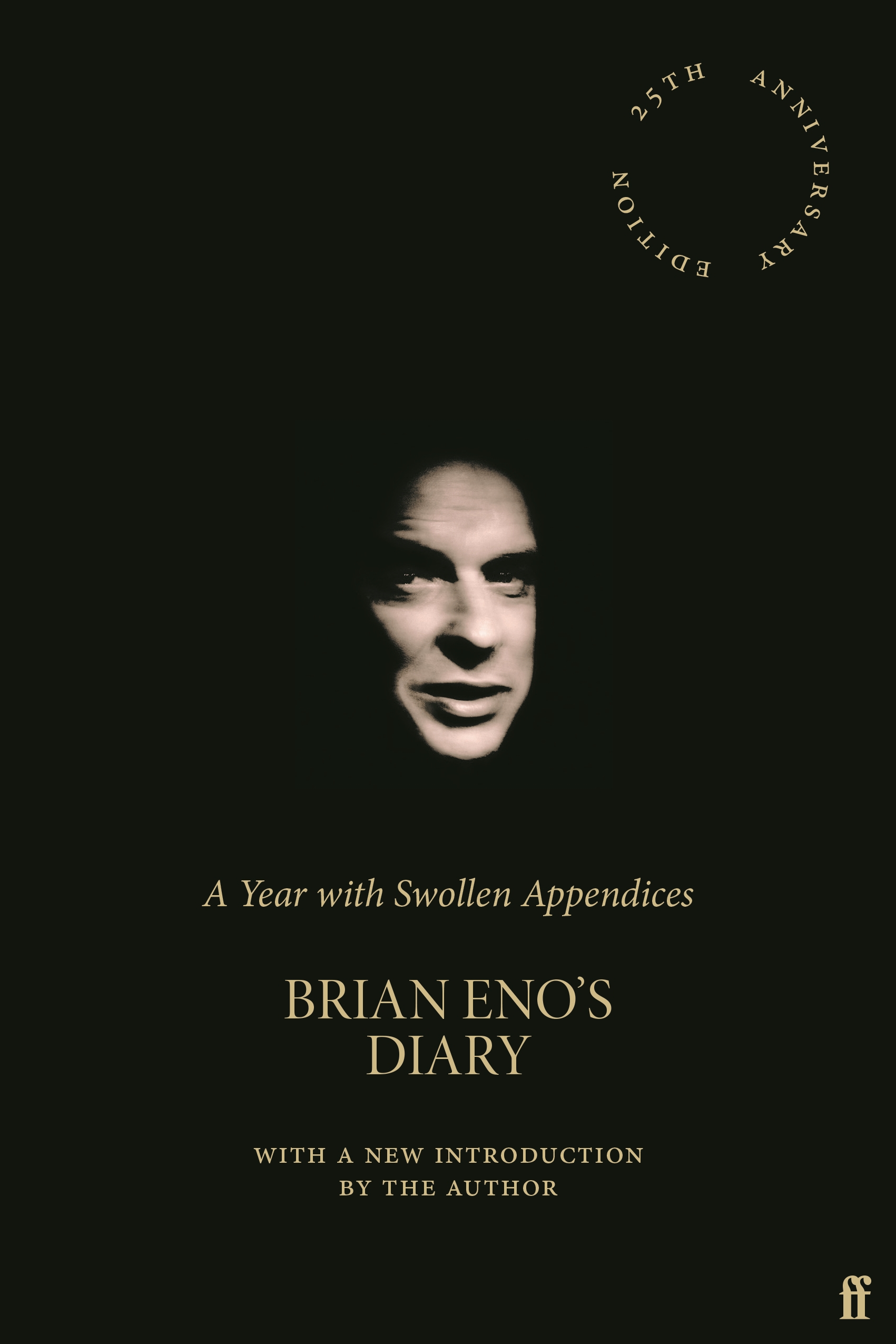 Back in 1973, in the brief interregnum between leaving Roxy Music and starting out on a singular solo career that would encompass art pop, the invention of ambient music, celebrated collaborations with David Bowie and David Byrne, and producing landmark LPs such as No New York, Brian Eno was the subject of a little-known documentary by Swiss filmmaker Alfi Sinniger. Twenty-four minutes long, Eno is short but priceless. “I have attempted to replace the element of skill considered necessary in music by the element of judgment,” he declares at one point. Later he admits, “I’m known as a poseur . . .” Tiny giggle. “. . . Which I am!” The diaries he has kept since he was ten appear on screen: they’re full of diagrams, doodles, and the word “Switzerland” in dramatic script.

The film offers plenty of ammunition for all those—and there have been many—who regard Eno as a perfumed ponce, an over-analytical egghead, a desiccator of pop who distrusts self-expression, champions sound over meaning, and prefers twiddling knobs in recording studios to the sweaty carnival of live performance. There’s even more fuel for fury in A Year with Swollen Appendices, the diary that Eno kept throughout 1995 and which, rather grandly, has now been republished in a twenty-fifth anniversary edition. Here he describes himself as “being a clever chap with words,” announces “I love neat work,” and, with characteristic self-deprecation, confesses that Bono tells him a track is “flat, featureless and lacking any kind of signature/hook (which of course puts it right up my Strasse—like NEU! circa 1976.)”

The journal chronicles Eno in a period of flux and rumination. He’s incredibly busy—producing records for Bowie, U2 (in their Passengers mode), and Jah Wobble; collaborating with Laurie Anderson on an exhibition held at a storage center; staging fashion shows for charity; giving talks at art colleges. Yet he worries that he’s sick of music, and that he’s becoming “a civil servant / a safe pair of hands / but always someone else’s craft.” On his forty-seventh birthday, he confides, “There is a feeling that things could just drift on and on like this: me being quite successful and accruing the respect of sheer inertia—being praised for still being there, while somehow not exploring the extent of my interests and intellect.”

If this sounds like the worrywart-ism of middle age, it also keeps him on his toes. Bono once told an interviewer, “A lot of English bands went to art school. We went to Brian,” and Eno’s diary shows that he’s still hungry for ideas—reading Karl Popper over breakfast, recommending Huizinga’s The Waning of the Middle Ages to pals, checking out cross-disciplinary experiments at Club Disobey. It’s easy to forget he’s a musician, but that’s no surprise: “I’m not promoting the record,” he says of giving interviews. “The records are promoting the ideas.”

One of the pleasure of diaries is that they’re precisely not theses. Ideas emerge on the hoof. As notes, whims, speculations. Mulling on the differences between the United States and Canada, he ponders if it’s partly about “upper-case and lower-case culture. I can’t imagine the Canadians talking about Good Government with capital letters, whereas in America even the Free Market gets that treatment.” After reading an Oliver Sacks article on architectural artist Stephen Wiltshire, he wonders, “Are there degrees of national autism (the extent to which a people is capable of empathizing with other peoples)?” He’s frequently approached to work on film projects, but admits to finding the medium overstaffed and over-bureaucratic: “Film is modern opera, with all its conceit and self-importance.”

It’s tempting to rifle though Eno’s diary and plunder it for creative advice, oblique strategies, “life hacks”—“When in doubt, tidy up”; “Old ideas don’t go away—new ones just get added”; “People should be trained in lying from a young age” (he thinks the latter would stimulate the kind of skepticism advocated by one of his favorite philosophers, Richard Rorty). He spends a good deal of time talking about the value of getting up early, taking long walks and public transport, cooking, swimming. His preference (in life as in music) is on process—and the process of paring things down. The goal is to create more space for play. And, almost the same thing, pretension—which is, for him, a way to take risks, rise above your social station, channel the imaginative elasticity of children, be less English.

Later, Eno recalls peeing into a bottle so that he can continue watching Monty Python—and then deciding to drink its contents: “It looked just like Orvieto Classico and tasted of nearly nothing.” Later still, in one of the thirty-six short essays and stories that form the “appendices” of the book’s title, he recounts how, with the help of a secret tube, he managed to urinate on Duchamp’s fountain at MoMA. He dubs it an act of “re-commode-ification.”

I first read Swollen Appendices shortly after it was published and remember being disappointed by its enthusiasm for tech-culture boosters such as Kevin Kelly, Nicholas Negroponte, and Stewart Brand. It seemed to confirm musician Pat Kane’s assessment of Eno as “chief jingle-writer for the cybernetic society, soothing our resistance to the future.” Reading the new edition in 2021, I’m struck by his dismissal of CD-ROMs, of VR, of interactivity; how he anticipates contemporary debates about algorithmic bias (“When people program . . . they express a philosophy about what operations are important in the world”); his prescient exhaustion (“Realized today I’ve spent three years gazing at computer screens and it has got me not very far”).

Mostly I’m impressed by the attention he gives to the then-ongoing war in Bosnia—producing a fund-raising LP, working with NGOs and charities—and the clarity of his vision: “The Muslims (though, as I keep saying, they’re a completely mixed-up bunch who we conveniently label Muslim) really just wanted to be left alone and be multi-ethnic. They, as opposed to the Serbs, revel in their multiculturalism.” He was—and is—far more than a clever chap with words.