In a show of late paintings, joy amid abjection and the approach of death. 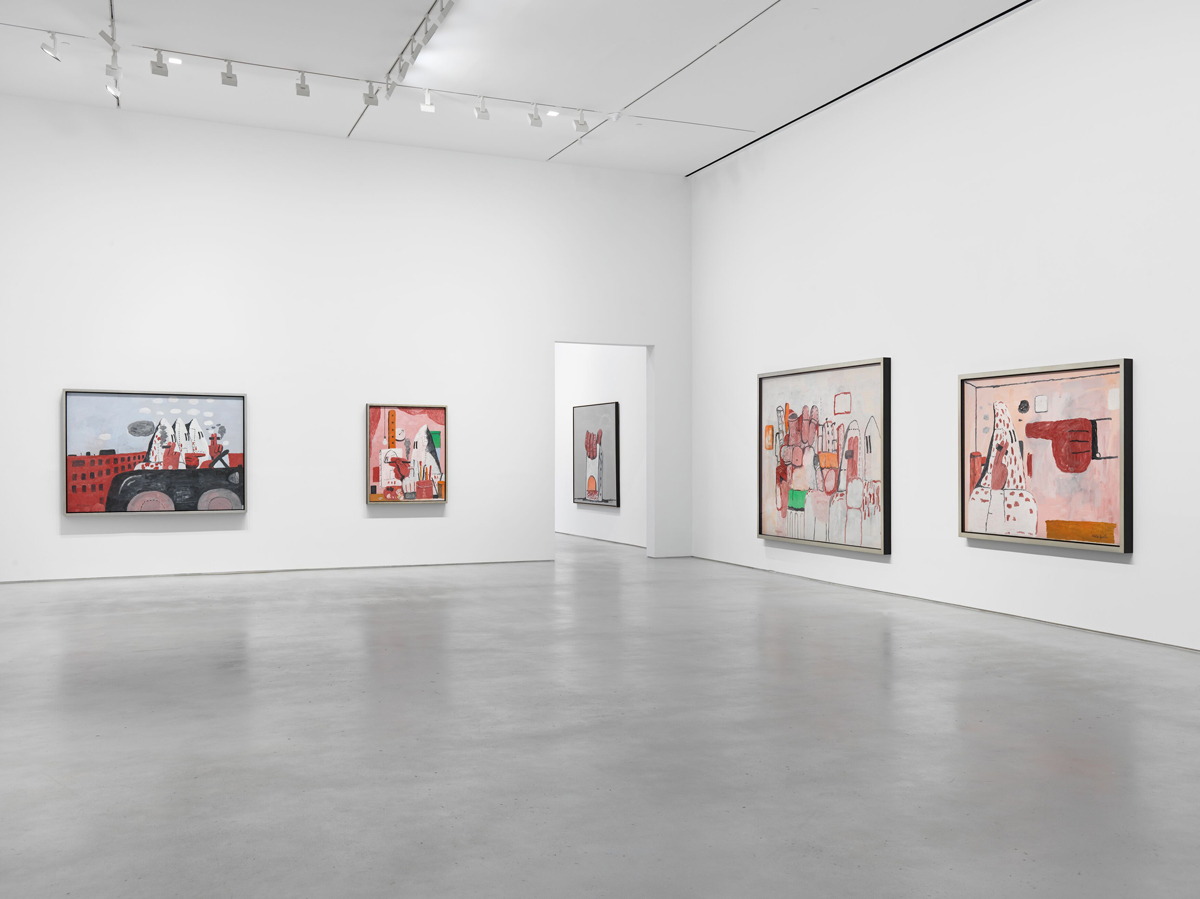 Sometime in the late 1970s on a cold and wet day in NYC, I went to see a Philip Guston exhibition at McKee Gallery when it was still in a modest suite of rooms in the Barbizon Hotel. In one room, wearing a bulky car coat, sat Guston himself, a rumpled heap of a man, smoking a cigarette. My parents, both artists, had gotten to know him and his family during a summer we spent in Woodstock in the mid-1950s. I wanted to say something, but I hovered nervously, too shy to address him. Then a woman approached, and after gushing about his work, she asked, “Oh Mr. Guston, are you still painting?” . . . Puff, puff . . . “You might as well ask if I’m still breathing” . . . Puff, puff . . . She stepped back, startled. I stepped forward, because though very young, I identified with the sentiment he expressed. Now I had the courage to say hello, and he was very gracious.

By the 1970s, Philip Guston had for many years been considered a major American artist, but he also was still a painter among others, albeit one now marked by controversy. His non-objective abstractions of the 1950s had been highly influential, and their popularity set up a great drama when, in the late 1960s, his work took a representational direction—a move some saw as a betrayal of modernist abstraction at a time when people cared about such aesthetic, philosophical, and stylistic loyalties. Guston had begun to recuperate the figurative and symbolic elements of his earliest work from the 1940s, now inserted within a field of lifelong influences: the radical subject matter and drawing style of comics such as Krazy Kat, which he had loved since his childhood; early Renaissance painting, including the symbolist elements in Piero della Francesca; the work of the Mexican muralists, including David Alfaro Siqueiros; and the social realism prominent in the Depression era in the United States. Philip Guston, 1969–1979 at Hauser & Wirth offers a potent selection of paintings from this third movement of the artist’s career. 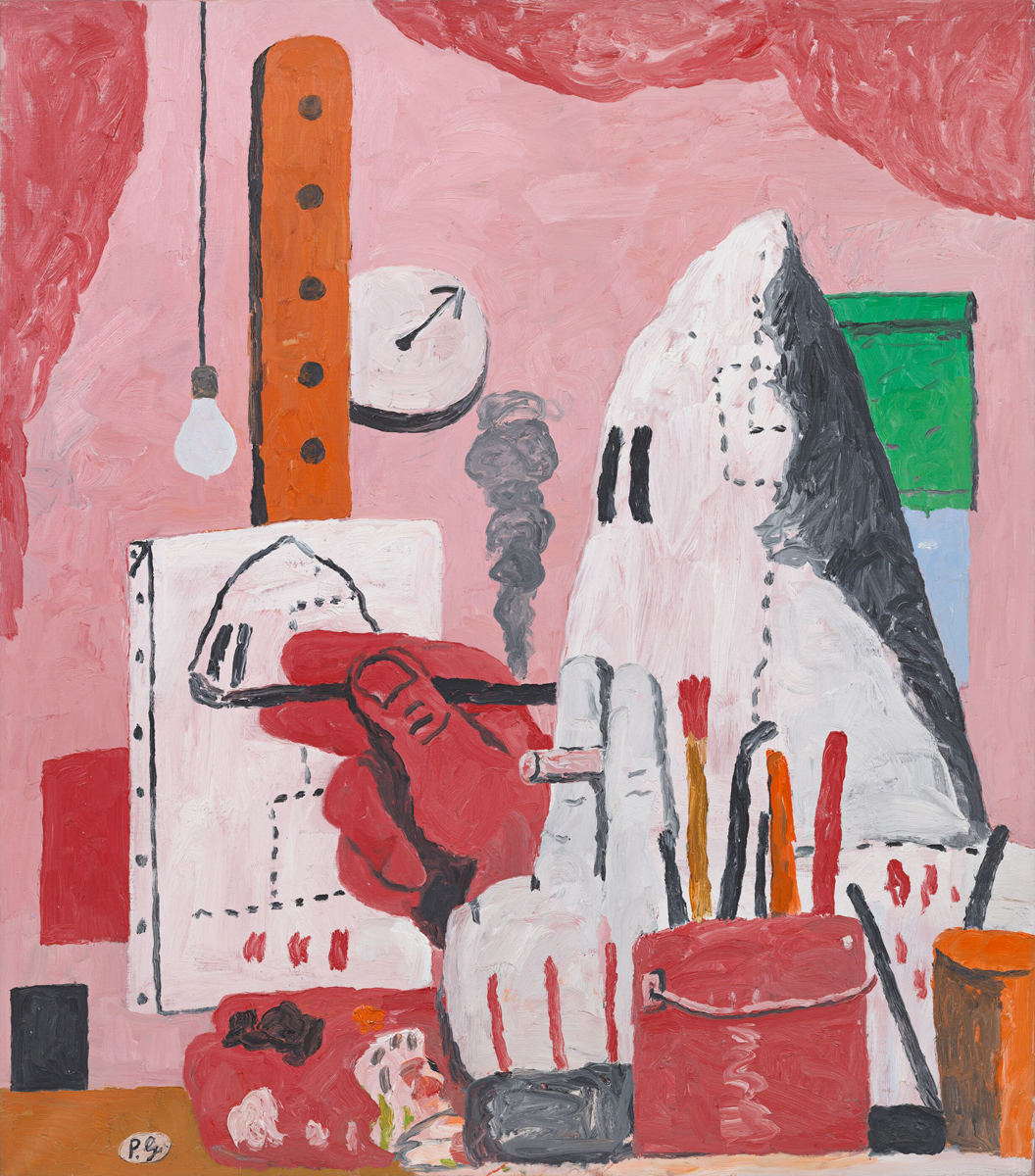 The exhibition of these late works inevitably recalls the crossfire that erupted over Guston’s oeuvre after a major four-museum retrospective slated to open in 2020 was postponed due to concerns around his representations of Klansmen (that show will now open in spring of next year). He did not deny that these hooded figures were stand-ins for the artist, thus suggesting a kind of complicity with even the most abhorrent of humanity. But Guston was no more a member of the KKK than Goya had devoured his own children! He had resurrected these figures from the ominous representations in his earliest work of Klu Klux Klansmen preparing for a lynching—paintings created by the son of poor Jewish immigrants who was living in Los Angeles at a time when the Klan had a strong presence in the city.

In fact, during the late 1960s and early ’70s, Guston was phasing out this imagery. Given the legacy and tropes of expressionist abstraction and Pop Art, and the long history of a more conventional academic representation that has always occupied a substratum of American art, finding a distinctive figurative language was a major task. During this period of transition to the representational, the hooded men operated as a kind of generalized figurative cypher for Guston until he found a newer language to depict human beings, that is, to represent himself. 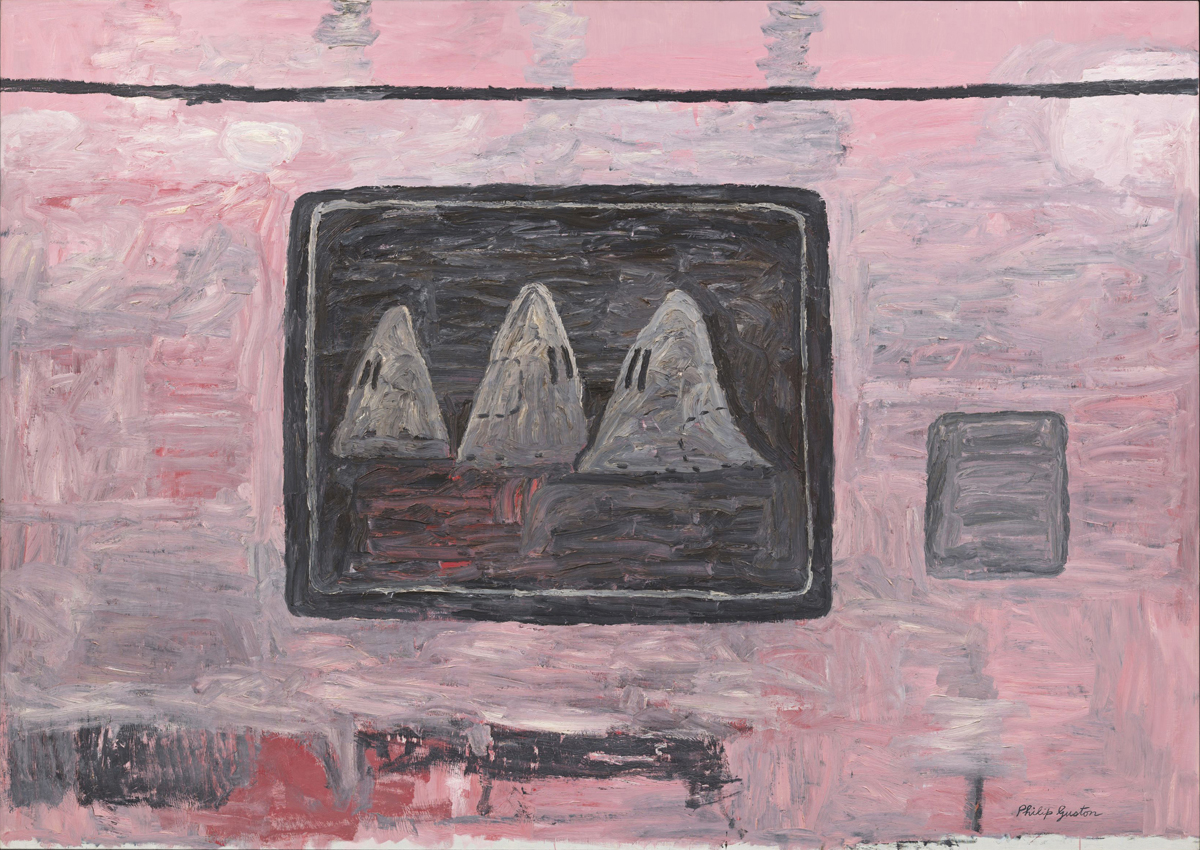 In Hauser & Wirth’s first room are paintings from the late ’60s and early ’70s of hooded figures on white or pink ground. The mood is relatively bright. They contemplate their canvases at the end of a day in the studio, smoke cigars, and drive around the city in cars. Only one of the works in this room—Blackboard (1969)—has a cryptic, foreboding atmosphere. Three gray hooded figures are painted on a darker gray blackboard that hovers ambiguously on a very painterly pink wall, which itself seems to hover over another earlier version of itself, painted with a broader brush, just visible underneath the main picture plane, at the bottom edge. It is both a very flat painting, with little indication of three-dimensional space, yet markedly smudged, grayed out, like a chalkboard at the end of a school day. As I suspected, when viewing it in black-and-white on my phone, the pink ground and the gray hooded figures are the same value, something that may subliminally affect the mood of the work. 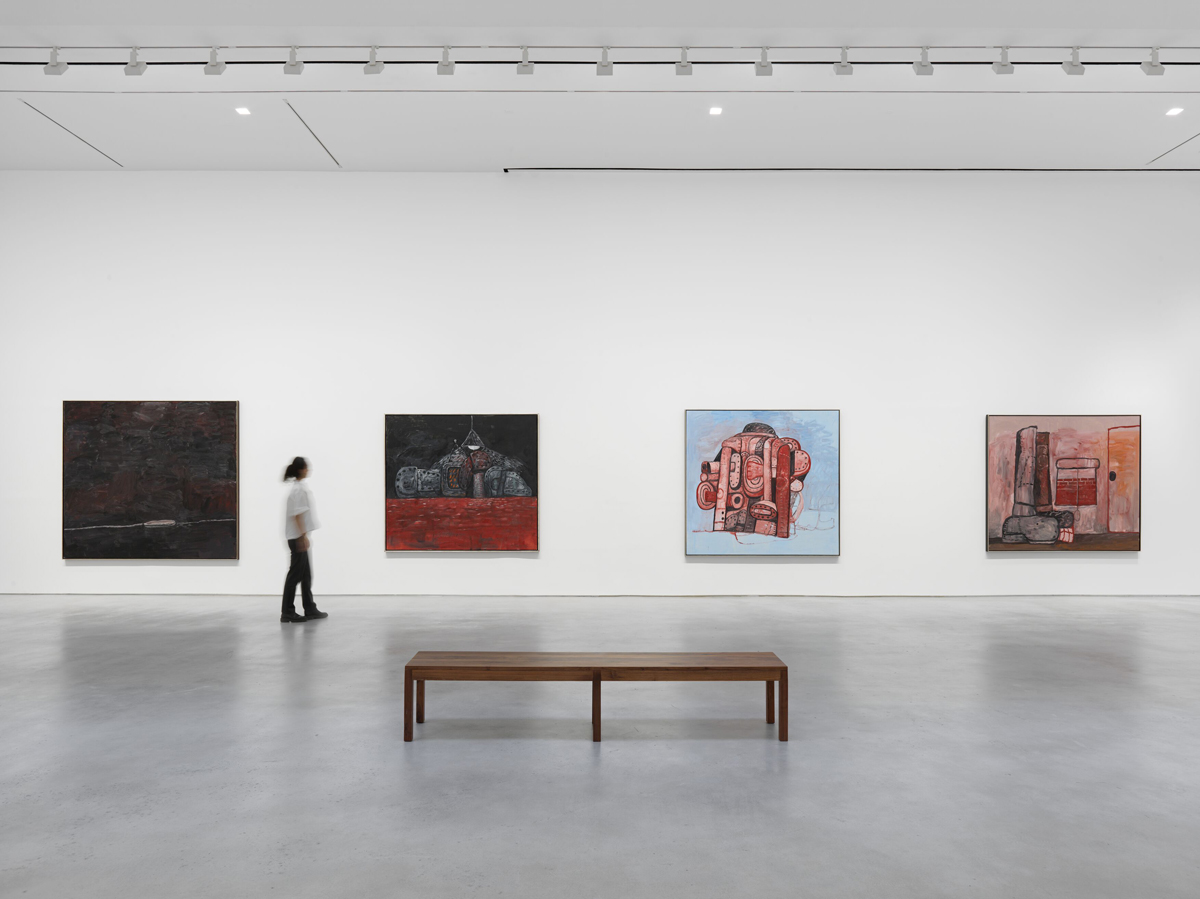 In the second room are later paintings from the ’70s, many with a darker or starker tone, where illness and the approach of death is palpably the underlying subject. Some are intriguingly minimal in terms of representational content: On Edge (1978) is a largely monochromatic work where active, purply black brushstrokes give the subtlest indication that Guston may have painted out a head. A pale line runs across the painting with a slight bulge just off its center. It is up to the viewer to read into it their greatest dread of what could be found in the cracks of the floor. At the center of Solitary II (1978) lies a heap of fragmented representational clues—a lamp, a foot, soles of shoes—but these may or may not resolve into the remnants of a man sleeping in the street or on the floor of a black room, floating on a sea of blood. Unlike Sleeping (1977)—where a man covered in a red blanket is tipped back so that we somatically empathize with the figure, however desperate his condition—Solitary II is not so much a fragmentary portrait of an abject human creature as it is the embodiment of abjection in the absolute. 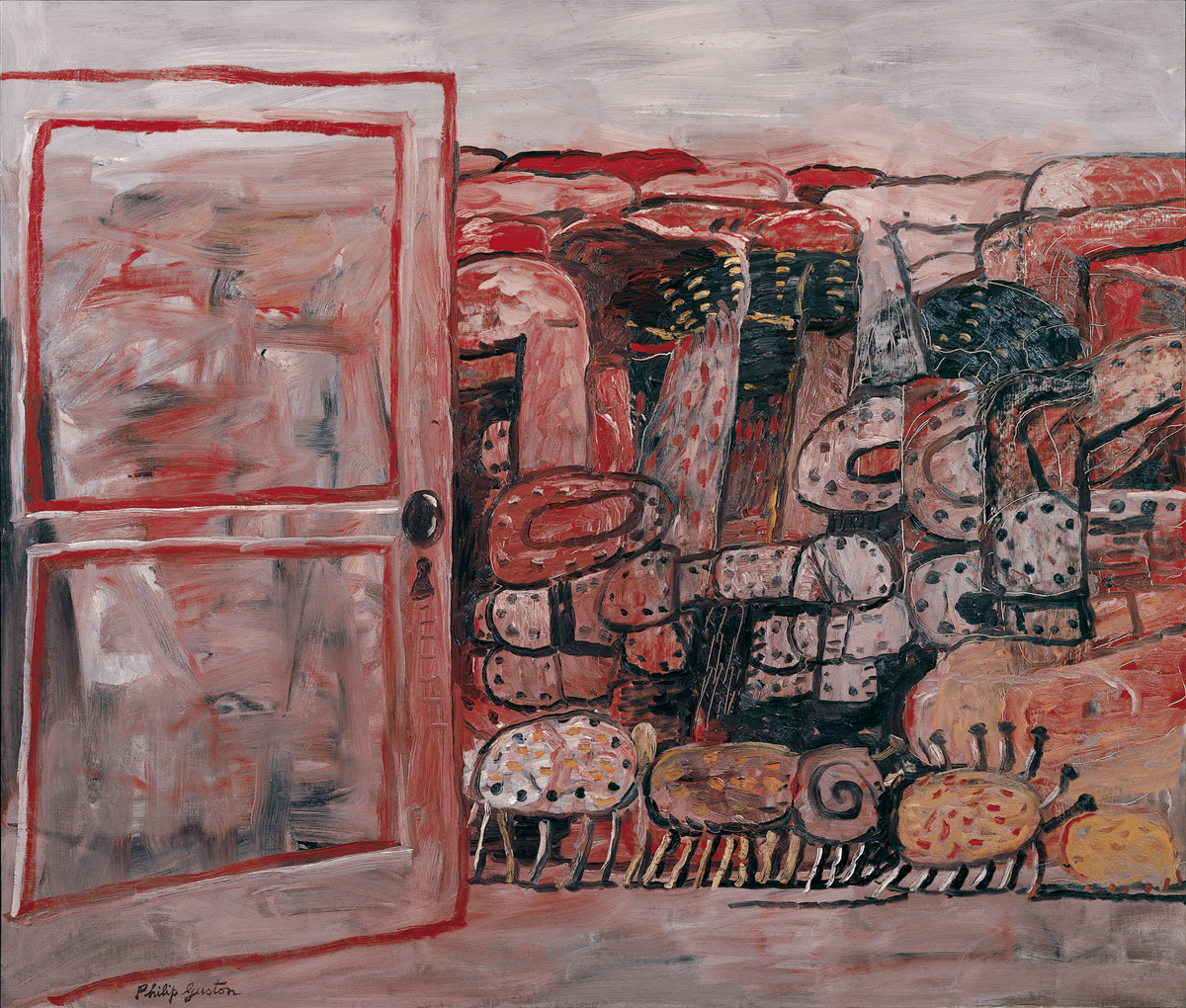 Not all these paintings are this somber in mood. Entrance (1979) shows a door opening to a heap of legs, an image akin to the piles of bodies discovered upon the liberation of Nazi concentration camps, with large vermin crawling along the bottom of the pile. But it has a warmth of color and an odd jauntiness—many of these late works have so much energy, confidence, mastery, and the kind of joy that painting can give an artist that the room is exhilarating no matter what is depicted. 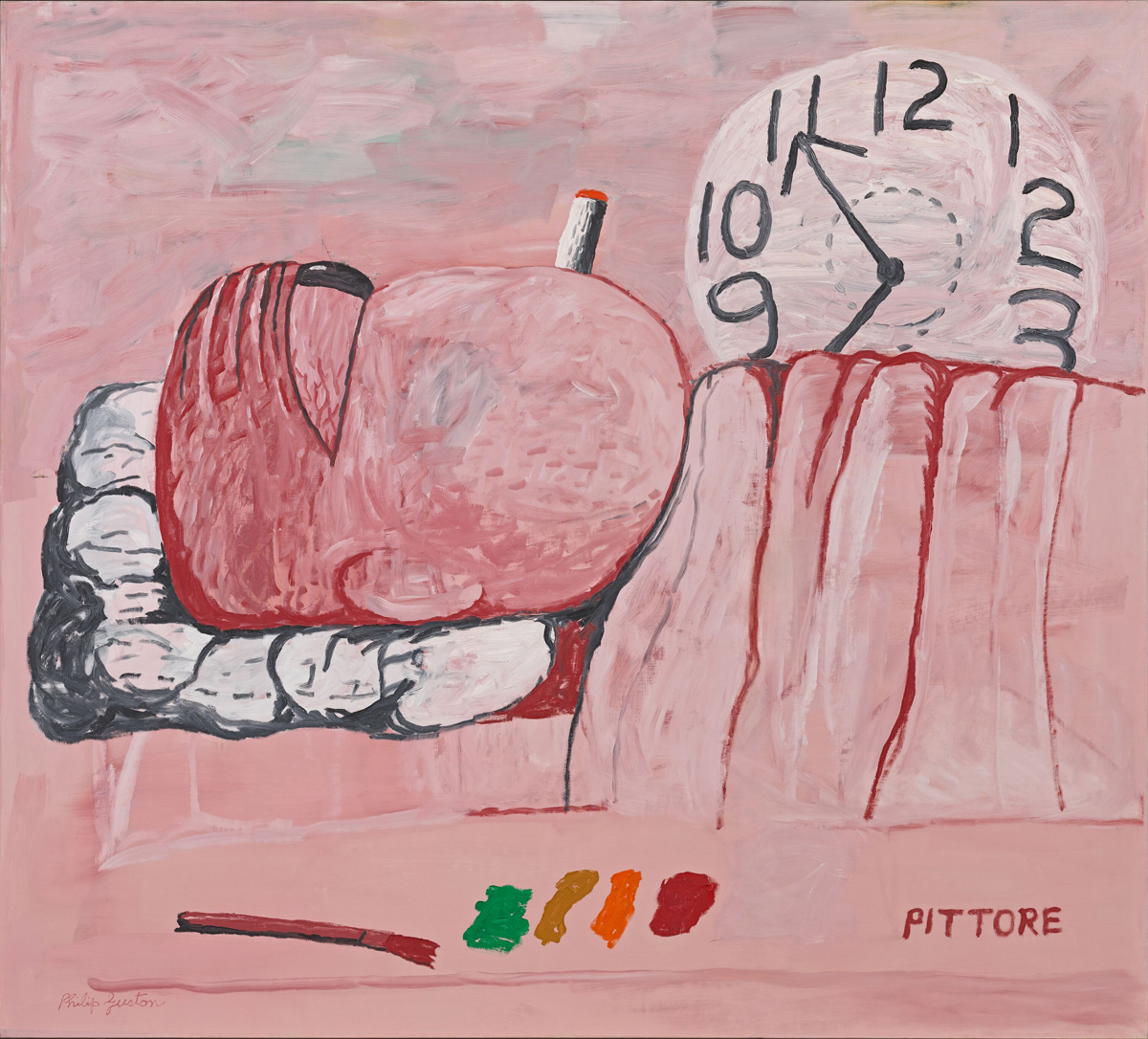 Indeed, during this intensely productive period, Guston moved back and forth from the tragic to the bright, with the work life of the studio, the act of creation, often depicted on a warm pink ground. In Pittore (1973), the painter lies in bed smoking a cigarette while gazing at a clock on the wall. Emblems of his craft are emblazoned on the side of the mattress—a stubbly red brush, strokes of color, and the Italian word for “painter” (the piece’s title).

One of Guston’s major achievements was that he imbued the graphic flatness of his cartoon-influenced style with the rich painterliness he had carried over from his abstractions of the 1950s. Yet his surfaces are not labored or thick. These are not works that are encrusted with layers painted over days and or years; they are arrived at in the moment, and we arrive at them as viewers in the moment. They take place in the present tense.

Mira Schor is an artist and writer based in New York City. Her books include Wet: On Painting, Feminism, and Art Culture and A Decade of Negative Thinking: Essays on Art, Politics, and Daily Life. She is represented by Lyles & King, which recently published a survey of her work and featured an installation of her major work War Frieze (1991–94) at Art Basel.