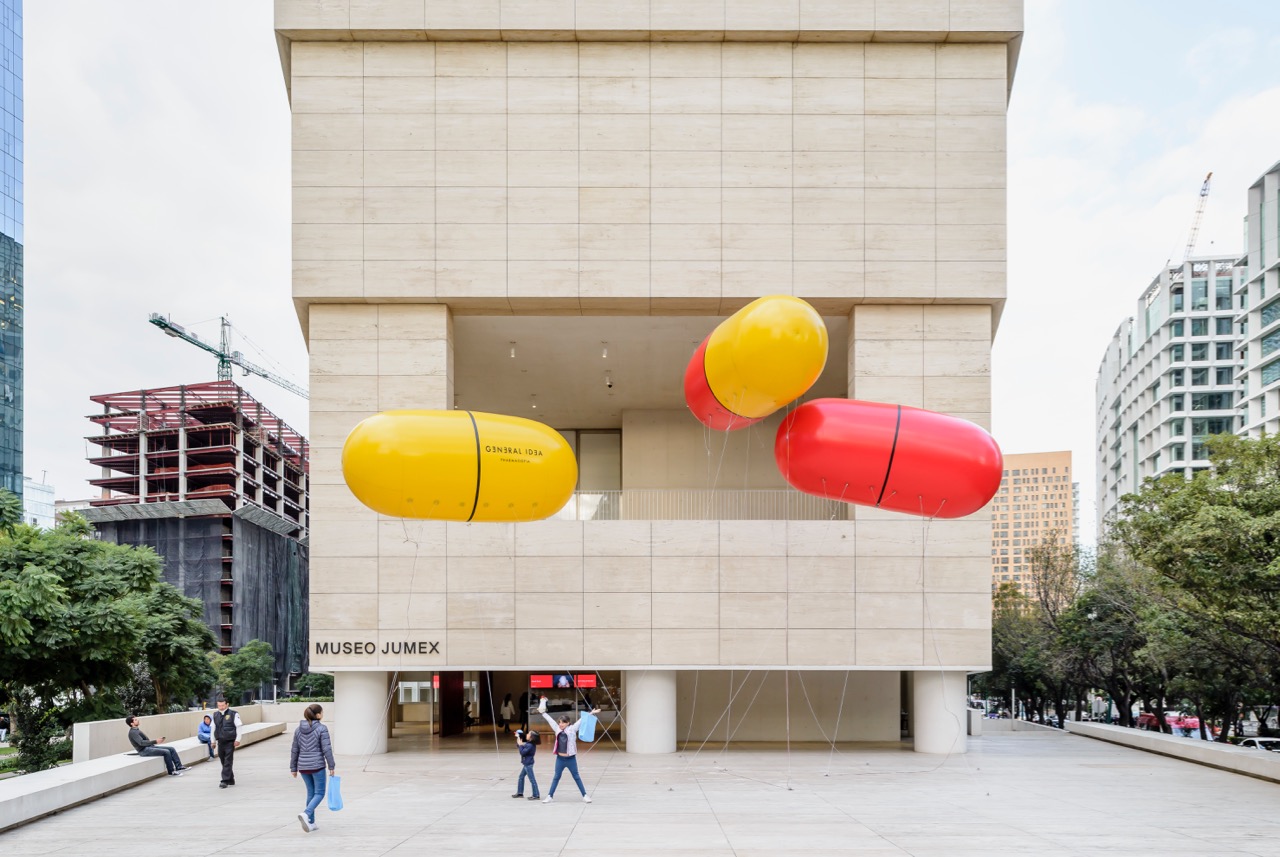 This week denizens of the art world descended on Mexico City for the Zona Maco art fair, giving the impression of business as usual, at least for people buying and selling art—and at least for now. But the specter of President Donald Trump’s plans for Mexico—the construction of a border wall, the renegotiation of the North American Free Trade Agreement, the deportation of undocumented immigrants—are already having a chilling effect, and their long-term toll seems dire. In this sense, General Idea: Broken Time at Museo Jumex in Mexico City feels particularly pertinent, since it showcases twenty-five years of work by a Canadian collective active at a similarly divisive political moment.

The group formed in a Toronto commune in 1969, although they didn’t adopt the name General Idea until 1970. (The name pivots around the concept of a countercultural collective consciousness.) Initially, the core trio—Felix Partz, Jorge Zontal, and AA Bronson (a.k.a. Michael Tims, who later went on to serve as president of the artists’ bookstore Printed Matter and found the NY Art Book Fair)—were like ambitious art students, mining recent developments in conceptual art, land art, performance, and mail art and creating photo-based and ephemeral works that feel derivative of Joan Jonas, Robert Smithson—or any number of artists working with typewriters and graph paper.

As Canadians, however, they had a special perspective. They were spectators to the juggernaut of American mass media and consumer culture, but at a slight remove. The same arm’s-length distance inspired Canadian scholars like Marshall McLuhan to move away from literary studies to study television and mass media. The influence of McLuhan and French theorists like Roland Barthes, Jean Baudrillard, and the Situationists permeated General Idea’s work in the 1970s, but the collective also included Mexicans like Ulises Carrión in their FILE Megazine (1972–89), a publication that copied the format of Life magazine. 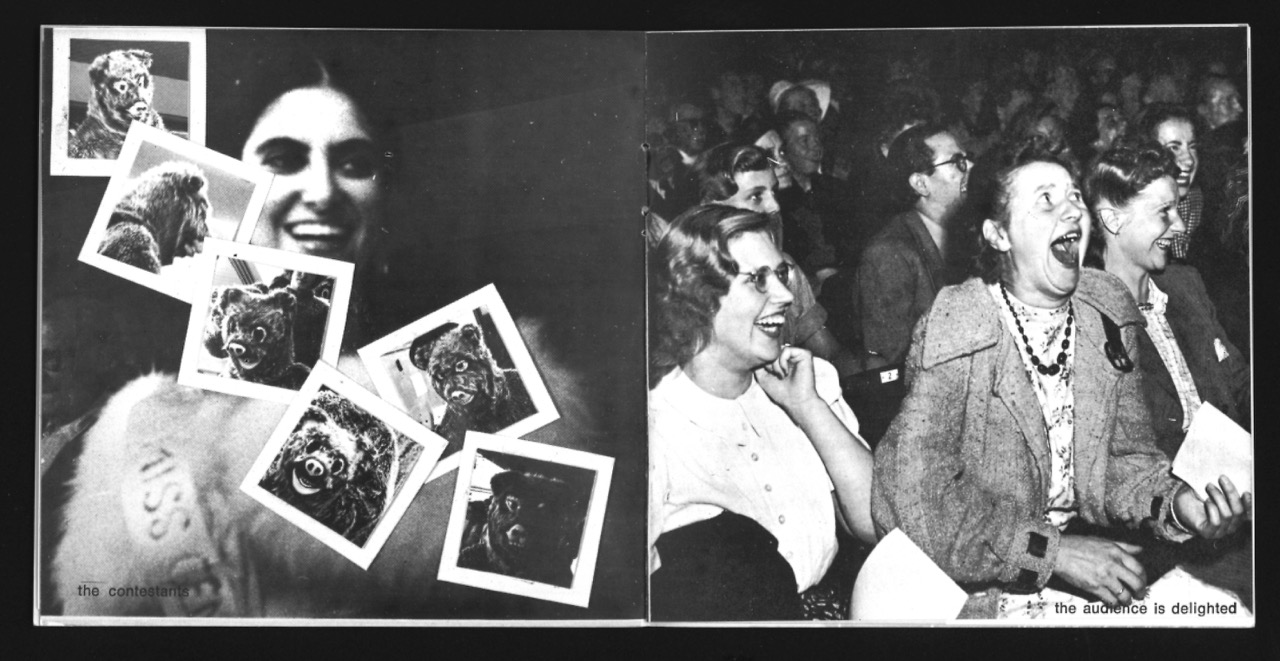 The group also benefitted from the invention of the Sony Portapak (1967), a portable video camera that gave artists and activists the same capabilities as television networks. A breakthrough work here is the Miss General Idea Pageant (1970), which satirized the spectacle of televised beauty pageants, but with a distinctly Canadian and media-theory angle: the winner of the pageant squeezed out the competition in the talent category by demonstrating a telex machine. (The runner-up dressed in a bear suit.) Reminiscent of Dada antics but updated for the media age, the project highlighted the absurdity of beauty pageants (interestingly, one of Trump’s special interests) and how they become vehicles for national identity.

The Miss General Idea concept continued in various forms into the 1980s and spawned other projects, like the fashion line V.B. Gowns: dresses made of Venetian blinds and similarly reminiscent of Dada “couture” but forecasting an explosion of collections and runway shows created by artists in recent years. While V.B. Gowns look artsy and quirky, General Idea began to borrow from advertising and design to create slicker-looking projects. Pilot (1977), a video commissioned by a television network in Ontario, blurs the lines in this regard. Drawing from Baudrillard’s idea of the simulacra, or the copy without an original, the video functions as a tongue-and-cheek—and yet real—documentary, press conference, and infomercial for the group.

What started off as a playful, acerbic collective project, however, crystalized in the 1980s into something deeply serious. Partz and Zontal were diagnosed with AIDS (both died from AIDS-related causes in 1994), and General Idea became one of a number of art-activist groups, like ACT UP and Gran Fury, who used graphic design to create propaganda to fight AIDS and homophobia. 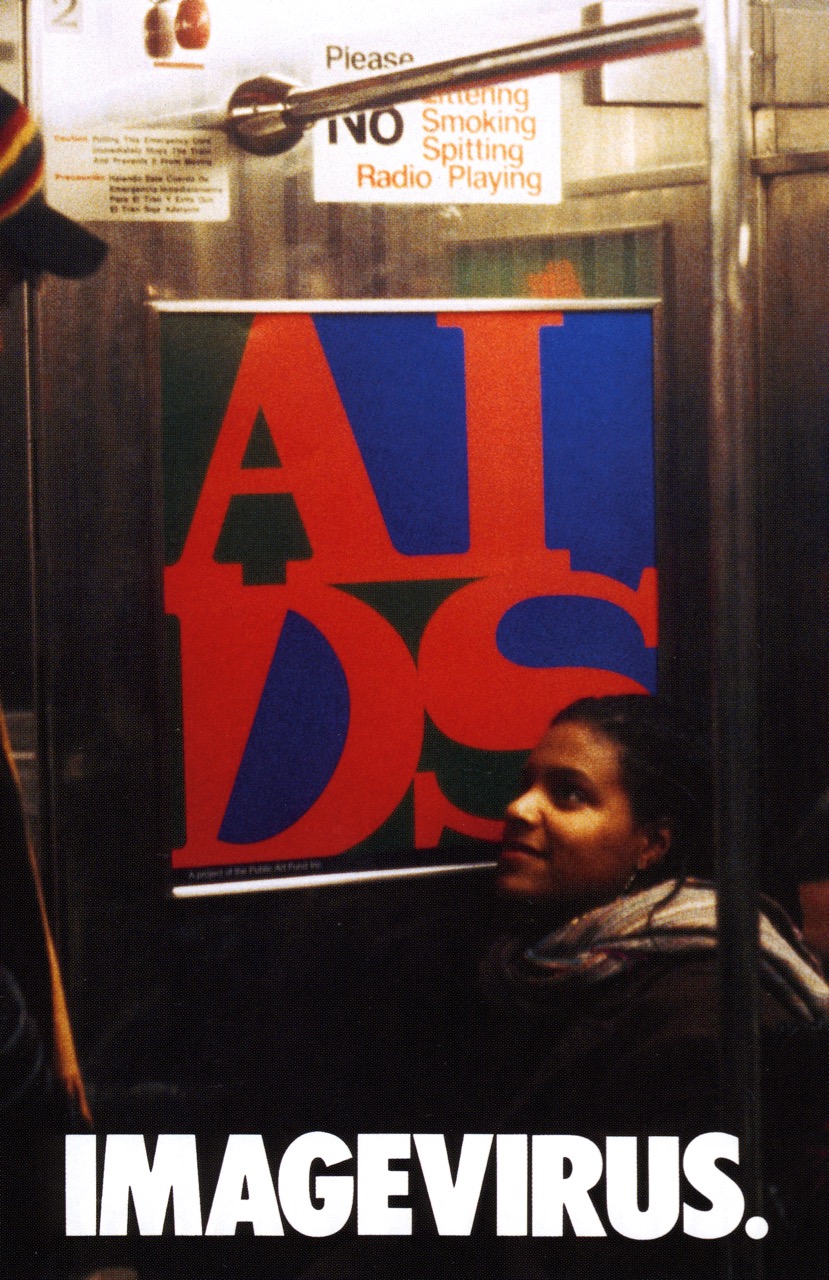 One of the group’s best-known works from this period is a retooling of Robert Indiana’s LOVE (1966) logo—only in General Idea’s version, the letters spell out AIDS (1987). Indiana’s sixties feel-good sentiment, with the cutely crooked “O” disrupting the symmetry of the four-letter block, is transformed into a deadly signifier. Their AIDS logo became an emblem of the age and appears here in several guises: a T-shirt, poster, animated video, and an Ad Reinhardt-style black painting, which turns Reinhardt’s supposedly formalist object into one suggesting mourning. 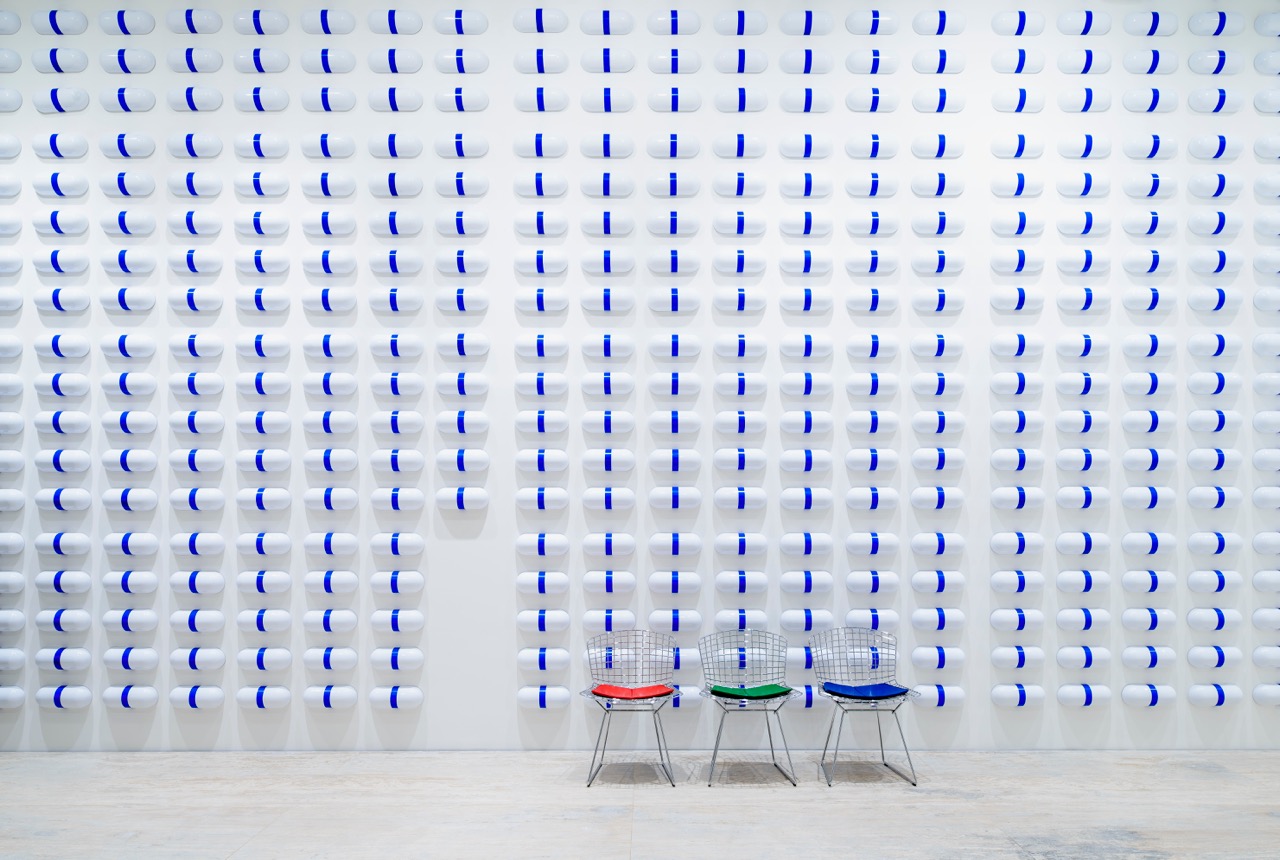 A slightly later project, One Year of AZT (1991), uses pop art graphics and sculptural techniques—like Andy Warhol’s Brillo Boxes (1964) for the AIDS era—to create an installation of large blue-and-white plastic pills attached to the wall, calling attention to the five pills per day AIDS patients had to take to (maybe) stay alive, but also the tug-of-war between government-funded drug research and the pharmaceutical industry.

For those who fear that the art world has become an insulated brigade of critics, curators, collectors, and creators marching from art fair to art fair, biennial to biennial, General Idea: Broken Time comes as a welcome tonic. The group’s canny activist approach feels particularly relevant. Indeed, as the Trump administration warms up, and protest, direct action, and activist art are kicking into high gear, General Idea provides an inspiring precedent.

Martha Schwendener is an art critic for The New York Times and a visiting associate professor at New York University. She recently edited a book of Vilém Flusser’s writings for Artforum (São Paulo: Metaflux, forthcoming) and is working on a book, based on a dissertation completed at the CUNY Graduate Center in 2016, exploring Flusser’s philosophies of language, technical images, and communications and their relationship with art.