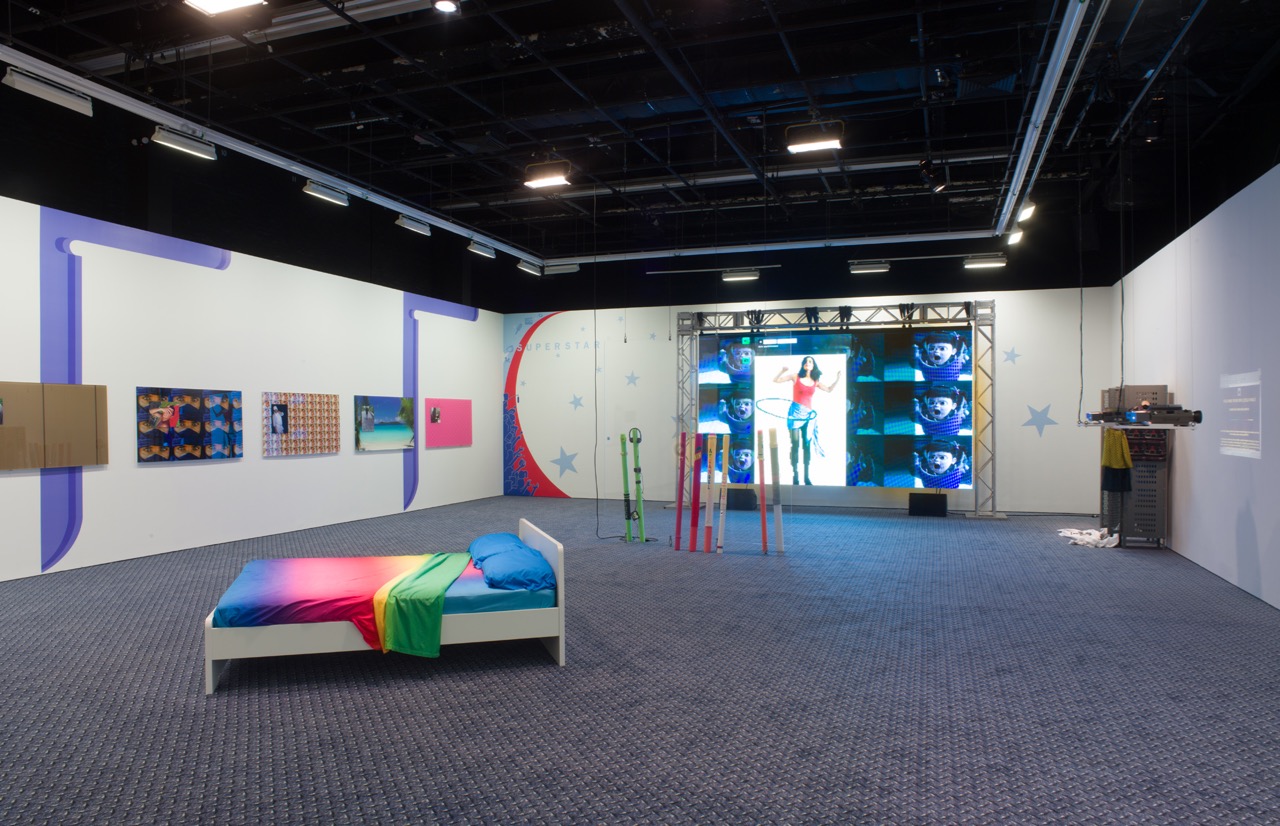 Curated by Caitlin Jones, organized for the Kitchen by Tim Griffin and Lumi Tan

Although Asymmetrical Response is a two-person show, the Kitchen’s large gallery space has the feel of a single coherent installation. Artists Cory Arcangel and Olia Lialina have staged this exhibition as a way of giving form to their long-running aesthetic dialogue, which began when they met in 2001 and has continued ever since across a range of online platforms. The exhibition transforms the Kitchen into something like an unnaturally cheery, transhistorical Best Buy, where devices that chart a potted evolution of domestic entertainment (slide projectors, LCD games, curved flat-screens) are ensconced among a sea of colorful wall graphics and textiles.

That cheerful tone rings partly hollow, though. Best Buy is a melancholy place, where content is seen and heard only to demonstrate high resolution or deep bass. It could be anything, as long as the levels are right. Best Buy makes manifest the casual disregard for human culture that is common to so many corporations and technological platforms. For example, in a digital context, users often labor under pressure of time, using tools that impose arbitrary constraints, only to have their work deleted without warning. Both Lialina and Arcangel focus on the plight of the Internet user in these highly asymmetrical conditions.

For Lialina, the Internet user is a figure of great promise. Her slide projection diptych Give me time/This page is no more (2015) brings together screenshots of home pages that were published by users of GeoCities, the web-hosting service popular in the mid- to late 1990s. Anyone could sign up for a free account and upload their own HTML pages, choosing a virtual “neighborhood” based on affinity, like Sunset Strip or College Park. GeoCities is rightly associated with much-maligned tropes of the amateur web, such as blinking text and “Under Construction” icons, but the site had great cultural significance as part of early Internet folk culture. Yahoo!’s decision to take the pages offline in 2009, leaving only user-created archives behind, was akin to destroying a large library.

In the diptych, Lialina displays web pages where the user either promised to update the page soon, or announced its closure. Many (especially those asking for time) use self-deprecating humor, while those abandoning their pages relay a sense of regret, loss, and anger. “I can’t think of a title!!!!!!” one writes in purple text atop an otherwise blank page, and presumably, they never did. “Always a BSB fan . . . forever,” another user attests, before explaining that, at seventeen, other priorities were beginning to interfere with their ability to update a boy-band fan page. The pages are easy to dismiss as amateur or sloppy, but Lialina’s writing about them (on the GeoCities Research Institute blog) has shown that they often involve nuanced aesthetic decision-making. In this slide show, the users’ announcements are offered in an endless variety of visual styles that make the web of today seem rigid and monolithic by comparison. 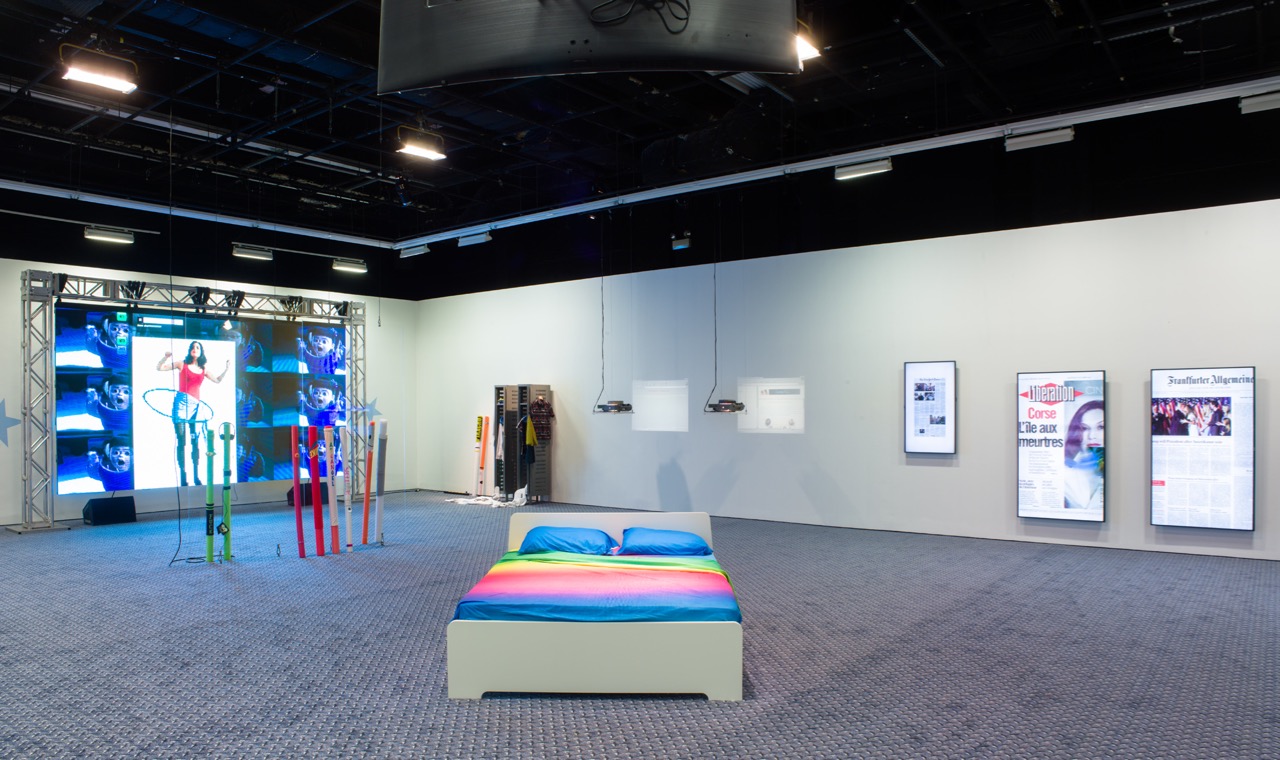 In each of the Online Newspapers—another of Lialina’s projects here—a decorated version of the front page of a major newspaper’s print edition is shown on a large flat-screen. Online Newspapers, Post factual Edition: Frankfurter Allgemeine (2017) features an above-the-fold photograph of Donald Trump embracing his wife Melania, while Ivanka Trump and Jared Kushner look on. Several mouse pointers hover over the impossibly perfect locks of each of the women, stroking gently, showering their hair with animated glitter.

This animated glitter effect seems familiar from blingee.com, where users add layers of animated effects—especially glitter—to still images. Founded in 2006, blingee has been, like GeoCities, criticized for its bad-taste amateur effects even as it has attracted a dedicated user base, including many older Russian women. Adding glitter to the newspaper here locates Ivanka and Melania in the realm of romance-novel fantasy conjured by many blingee users. It comes across as a sardonic gesture, tapping into the power of vernacular web culture to reframe institutional narratives.

In the very center of the gallery is a bed, decked out with sheets from Arcangel’s fashion line, Arcangel Surfware, which consists of comfortable clothing and household goods for Internet surfers. The sheets are patterned with colorful gradients produced in Photoshop, which can create seamless transitions between hues at the click of a mouse. Arcangel’s use of the gradient highlights the absurdity of the promise of self-expression offered by digital culture: it suggests that digital image-making involves making a choice from a closed set of options, and letting the software do the rest. Although they show that the most important aesthetic decision-making is done by computer scientists, not by users, the comfy bedsheets don’t foster a sense of anxiety about this state of affairs. 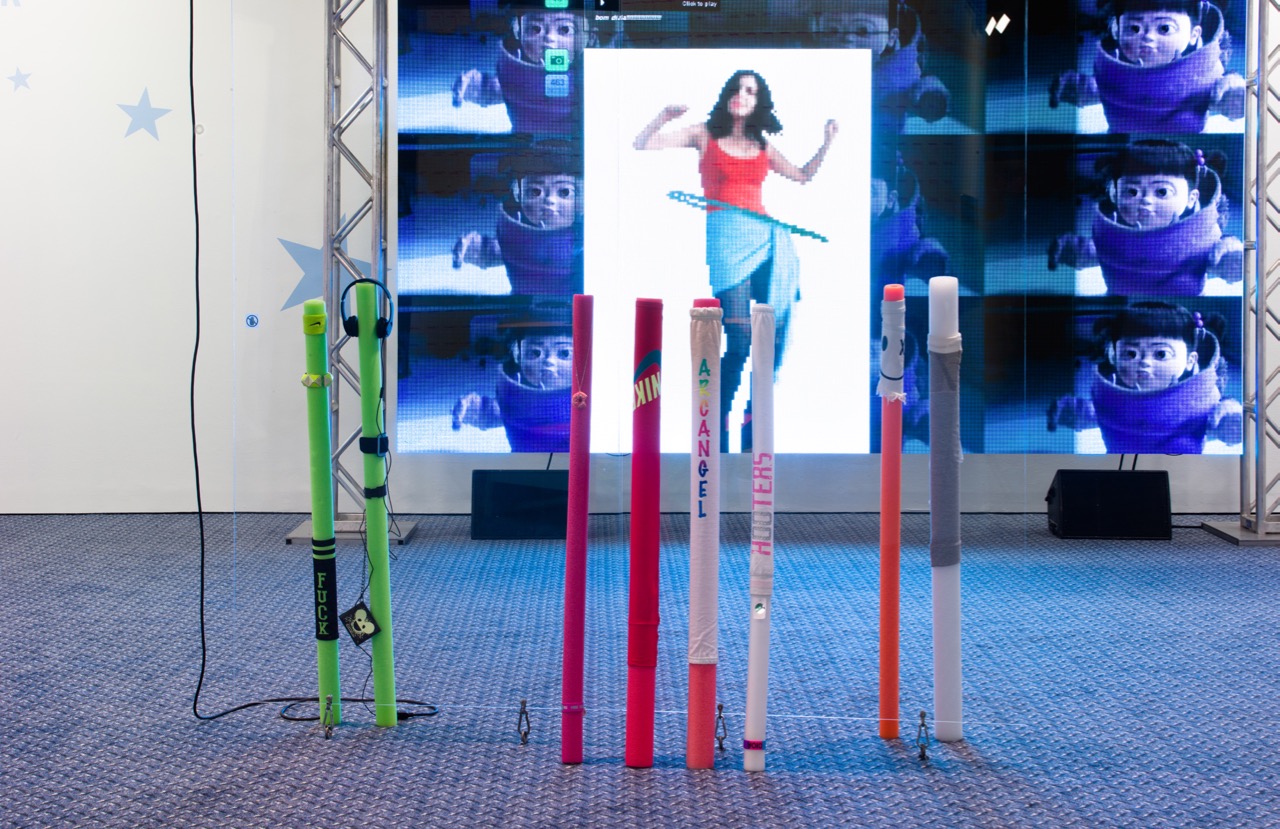 Arcangel also addresses vernacular cultures that are not Internet-specific, notably in his enigmatic pool noodles. Arcangel dresses up what are essentially manufacturing detritus repurposed as colorful flotation toys in little outfits and displays them as sculptures. Each adheres to a certain subcultural norm and typology. One, a “Webmaster,” wears a USB bracelet and Call of Duty wristband. Another, a “Screen-ager,” sports Beats by Dre headphones and carries a deadmau5 wallet chain.

For the noodles, like the computer user that emerges in Arcangel’s work, self-expression involves selecting among available options—in this case, by choosing and matching accessories that are identified with various kinds of subculture. While consumer culture provides only a range of preset templates within which to work, the noodles are surprisingly successful at conveying a sense of personal style. They seem so self-assured.

It is notable that Arcangel grew up in the US, the land of consumer choice, while Lialina grew up under communism in the USSR—given that Arcangel focuses on the constraints of digital culture, while Lialina celebrates its proliferation of gestures and forms. Ultimately, though, both artists seem to share the belief that no system can fully contain users’ need to produce, to embed part of ourselves in something that can exceed the envelope of the body and travel through culture at large. In Asymmetrical Response, this is not a pure, mystical expression of an otherwise unknowable inner life, but a tactic for engaging with, inhabiting, and reframing the Best Buys and other institutions of power that define our lives.

Michael Connor is artistic director of Rhizome, where he is working on the ongoing online exhibition Net Art Anthology, which will re-stage 100 works of net art over the next two years. He has curated exhibitions and projects for Yarat, Baku, Cornerhouse, Manchester, the Museum of Moving Image, New York, ACMI, Melbourne, Bell Lightbox, Toronto, FACT, Liverpool, MocaTV, and BFI, London. His writing has appeared in anthologies such as You Are Here: Art After the Internet (Cornerhouse), Digital Video Abstraction (UCPress), and Television Becoming Unglued: The Emergence of Video Processing Tools (UChicago).