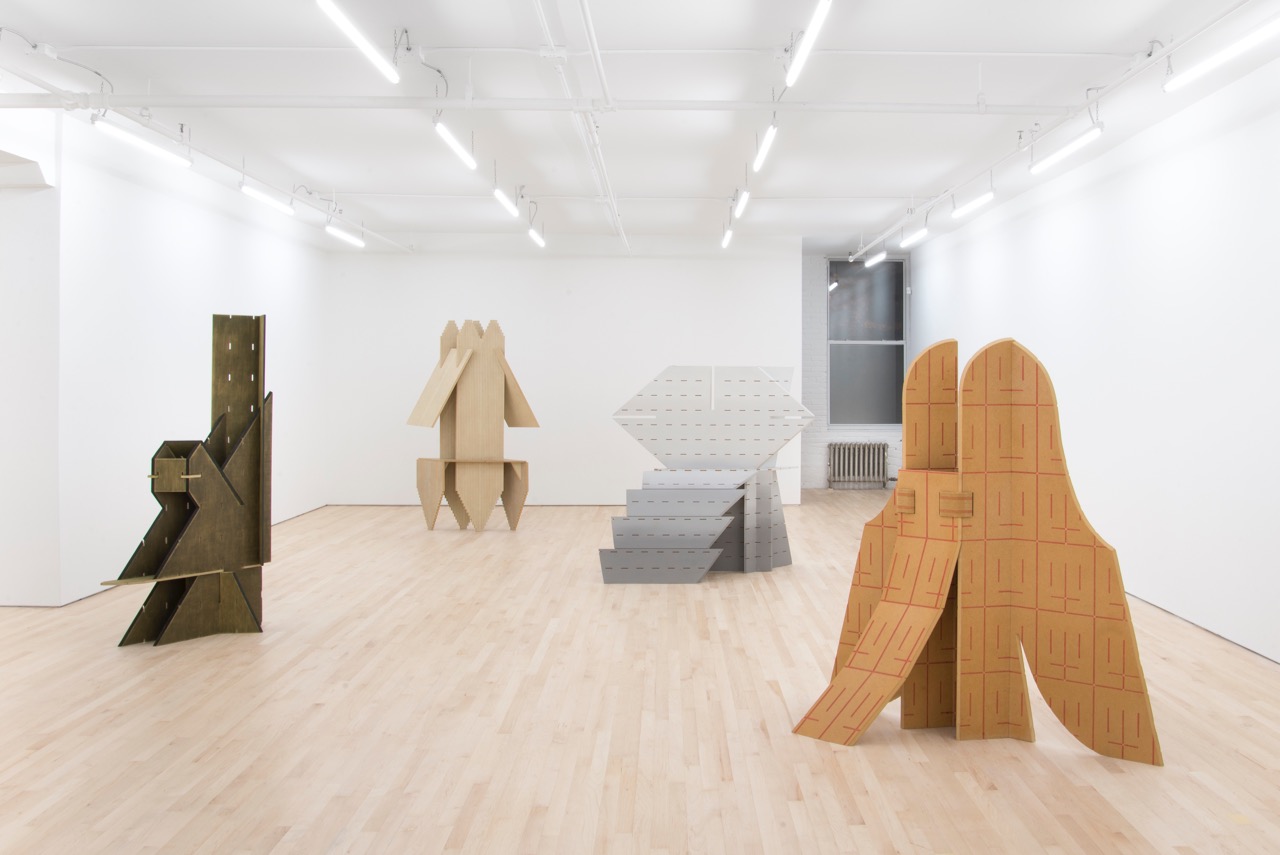 In the late spring of 1980, Akira Kurosawa’s samurai epic Kagemusha won the Palme D’Or at the Cannes Film Festival, an honor it shared with Bob Fosse’s musical All That Jazz. Several months later, in Fosse’s hometown of Chicago, Diane Simpson, a recent MFA graduate from the School of the Art Institute—a draftsperson and sculptor fascinated by Japanese scroll paintings—saw Kagemusha and had an epiphany that would set the course for more than three decades of prescient, rigorous, witty, and modestly exquisite work.

There was one scene in Kurosawa’s movie that Simpson just couldn’t shake. It wasn’t the final, Grand Guignol battle, with its cast of five thousand extras; it was a quiet ceremonial gathering of a few samurai, seated in a semicircle with their backs to the camera. “The segments of their armor skirts formed arcs cascading from their waist onto the floor. That scene stuck in my head,” Simpson told the curator Dan Byers, who organized a highly praised survey of her work at the Institute of Contemporary Art/Boston in 2015. (The Boston Globe deemed it “superb.”) She set off on a DIY tutorial, studying the construction principles of Japanese armor.

Eureka stories are conveniently tidy—Archimedes in the bathtub, Simpson at the movies—but, in this case, Simpson’s ongoing formal and conceptual concerns really are persuasively compressed into that one scene: tensions between figure and costume, fluid and rigid, form and function, part and whole, bodily and architectonic. Also, perhaps most significantly, between two and three dimensions, the interdependence of a flat image and volumes in space. Simpson’s art has only recently been gaining attention outside the Midwest, where she’s exhibited steadily since the early 1980s. Contributing to that wider awakening is the fact that she was bent on disrupting distinctions between surface and space years before “post-Internet” became a critical catch phrase; it’s fitting that she had her a-ha moment in front of a screen.

JTT inaugurates its new second-floor space on Chrystie Street, just a stone’s throw from its former vest-pocket digs on Suffolk Street, with seven irresistible sculptures from Simpson’s Samurai series, made between 1981 and 1983. (One piece was brought up to scale in 2016, based on a 1983 model.) Nearly all the jaunty modular works were fashioned from everyday MDF boards, their components cut out with a saw by the artist, based on her precise hand-drawn diagrams, then slotted together. (The stepped construction of some of the edges suggests characters in an eight-bit video game.) Simpson’s drawings borrowed the axonometric perspective of the Japanese scroll paintings she so admired; it was also favored by modernist architects from the Bauhaus and De Stijl. In axonometric renderings of 3-D objects, lines remain parallel, rather than converging into a single vanishing point. It’s worth noting that Simpson hit on her forty-five-degree-angle formula—a standard feature of computer-assisted design programs—without digital aid. 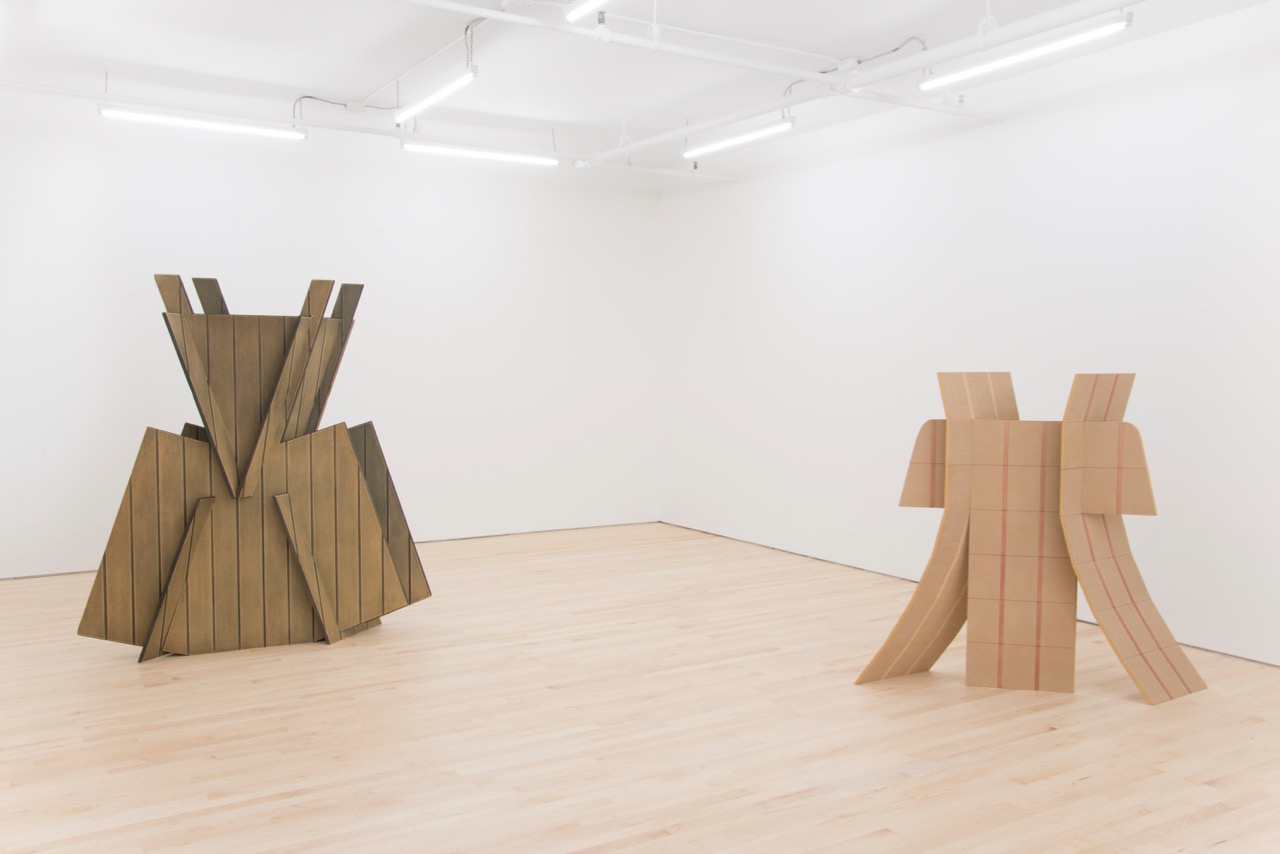 At JTT, Simpson’s ingeniously crafted samurai exude a vibe that’s more motley than regimental—they’re slapstick sculptural updates of masterless ronin. For the most part, their scale is human, ranging in height from roughly five to about six-and-half feet, with surfaces tenderly stained in subtle shades like salmon and sage. (“Texture,” another watch word of the digital age, has been a core concern of Simpson’s for decades.) One sculpture is marked with a red-pencil grid, lending it the air of a Brobdingnagian piece of origami folded from graph paper. As strongly anthropomorphic as the forms are, sporting “arms” that jut out from the core, they’re also architectonic. Thoughts may drift to Brancusi’s remark that “architecture is inhabited sculpture.” Simpson’s sculptures, which have hollow interiors, can evoke architecture tailor-made for a party of one. 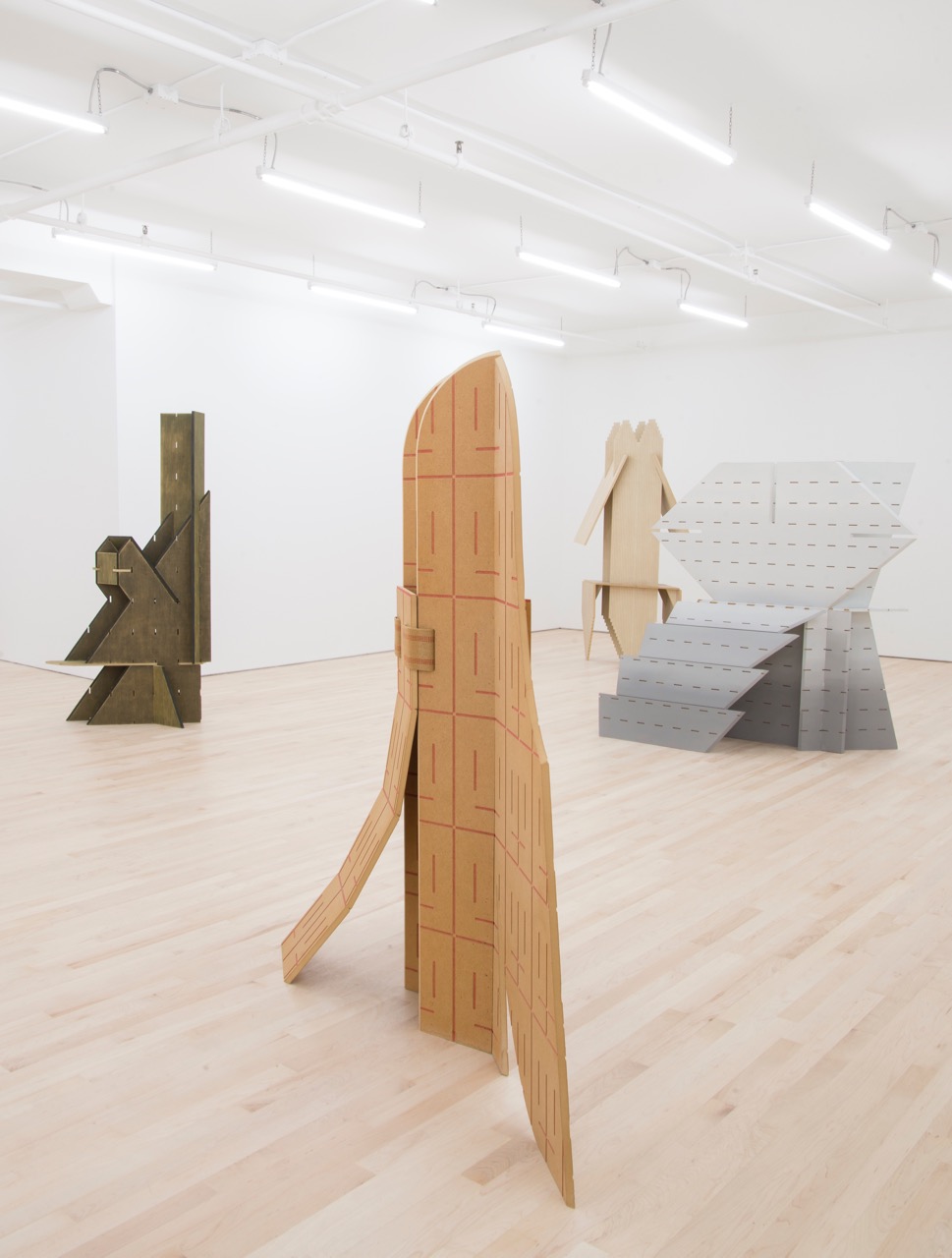 When Simpson saw Kagemusha in Chicago, she wasn’t your typical MFA grad: she was a forty-five-year-old mother of three (she is now eighty-one), who left the School of the Art Institute in 1957 just one quarter short of her BFA, in the ninth month of her first pregnancy. She returned when her youngest child started first grade and applied for graduate school when she turned forty. This may help to explain the startling maturity of her early work. In their modular compositions and abstract geometries, the sculptures at JTT speak the language of minimalism but coin a new slang, through explicit allusions to the human figure. (In the three decades since her Samurai breakthrough, Simpson’s sculptures have continued to mine the terrain of the figure, through close study of garments from Elizabethan petticoats to Amish bonnets.)

Thanks to those forty-five-degree angles she favors, Simpson’s objects play pictorial tricks with foreshortened perspective, which can make a viewer feel as if they’ve slipped into a picture plane, like Alice on the other side of the looking glass. There’s an uncanny sense at JTT that her samurai are on the brink of collapse—not that the sturdy constructions could fall apart, but that they might flatten or fold into themselves, like a telescope. In their balancing acts of rigid and flexible, the sculptures evoke the bone-and-flesh makeup of bodies themselves, resulting in a heady experience for the spectator, as visceral as it is visual.