Stephen Adly Guirgis returns with his first play since winning the
Pulitzer Prize. 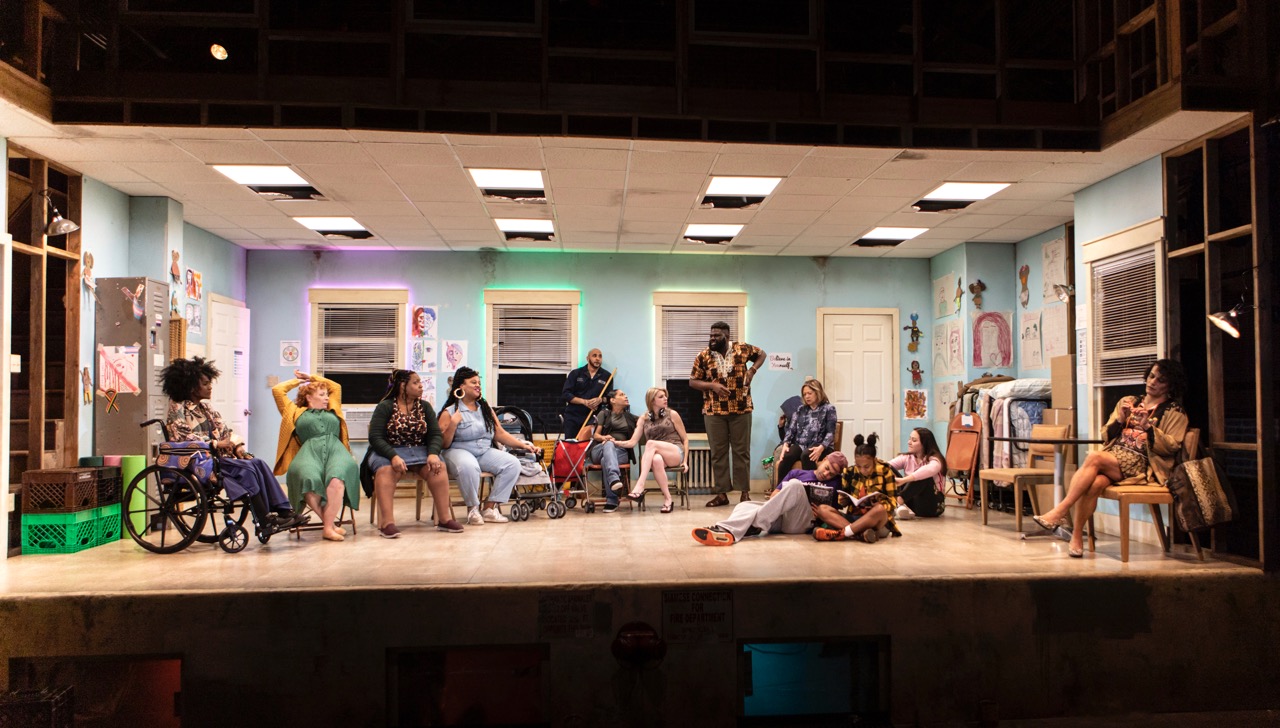 Stephen Adly Guirgis takes us into distraught urban spaces that rarely manifest on the American stage—places full of struggle, contention, and resilience. His 1999 play In Arabia We’d All Be Kings looked at addicts and sex workers in the shadow of a newly sanitized Times Square. In Jesus Hopped the ‘A’ Train (2000), an inmate seeks God while awaiting trial in the Tombs, later Rikers Island. Even in The Motherfucker with the Hat, Guirgis’s 2011 Broadway breakout and his most comic work, insanity unfolds in a residential hotel room where an ex-con aspires to come clean while navigating a city running on deceit.

Guirgis, a New York City native, is a kind of hometown dramatic poet of these tough precincts. In seesawing stories of people down on their luck, he consistently shows us how streetwise humor becomes truth telling, how self-delusion helps survival, and how eccentricity mingles with pathos.

Halfway Bitches Go Straight to Heaven, a coproduction by the Atlantic and LAByrinth theater companies, is Guirgis’s first new play in five years. (It’s also his first stage foray since winning the 2015 Pulitzer Prize in Drama for Between Riverside and Crazy.) Perhaps reflecting the unconscionable social cruelties that have multiplied in that span, Halfway Bitches takes a turn into somberness and makes urgent appeals for empathy. 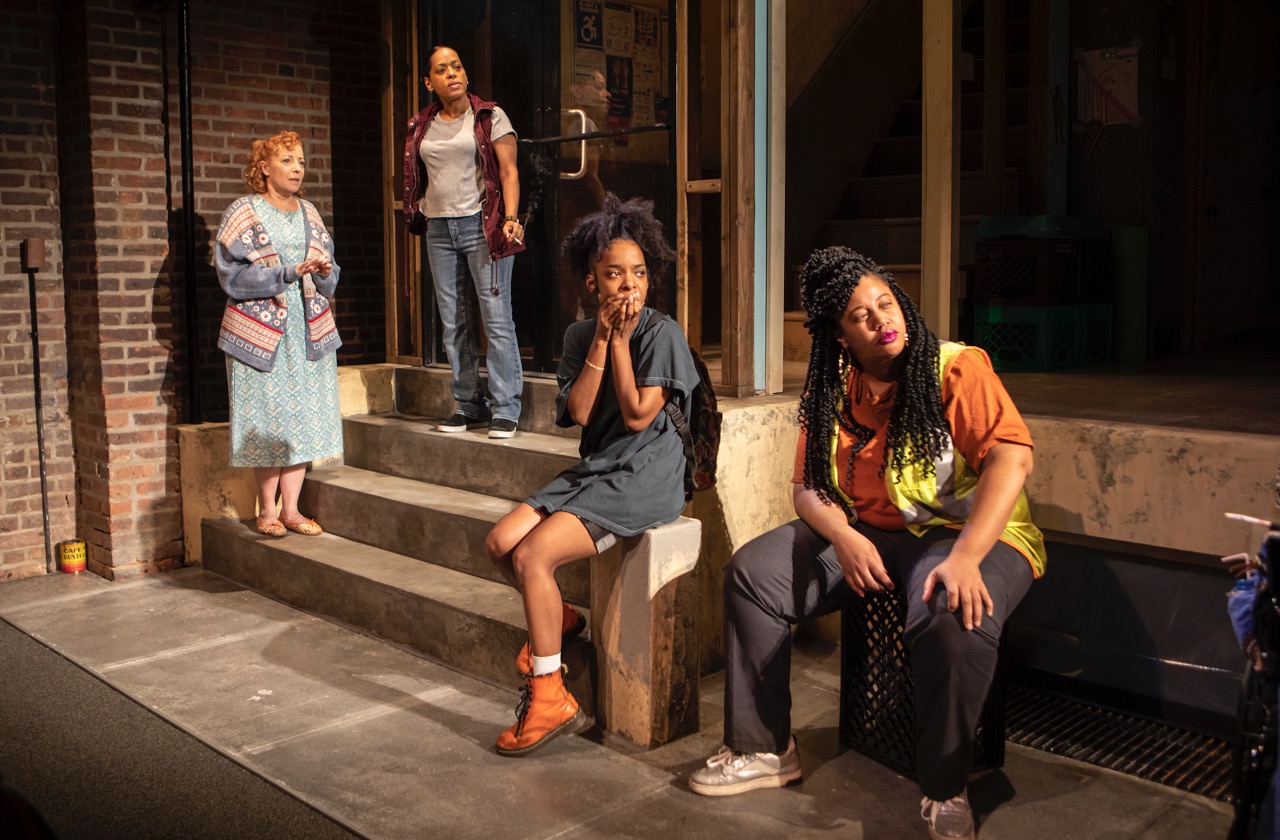 The play revolves around the denizens of a nondescript Upper West Side building with only the street number 340 on the front door. Narelle Sissons’s set design adroitly presents the audience with this building’s facade and interior simultaneously—it’s the architectural embodiment of a play about the invisible stories of the city’s most vulnerable. (The entryway, with a stoop, glass doors, and security camera, occupies stage right, but we can also see an upper-floor bedroom, an office, and a community room.) 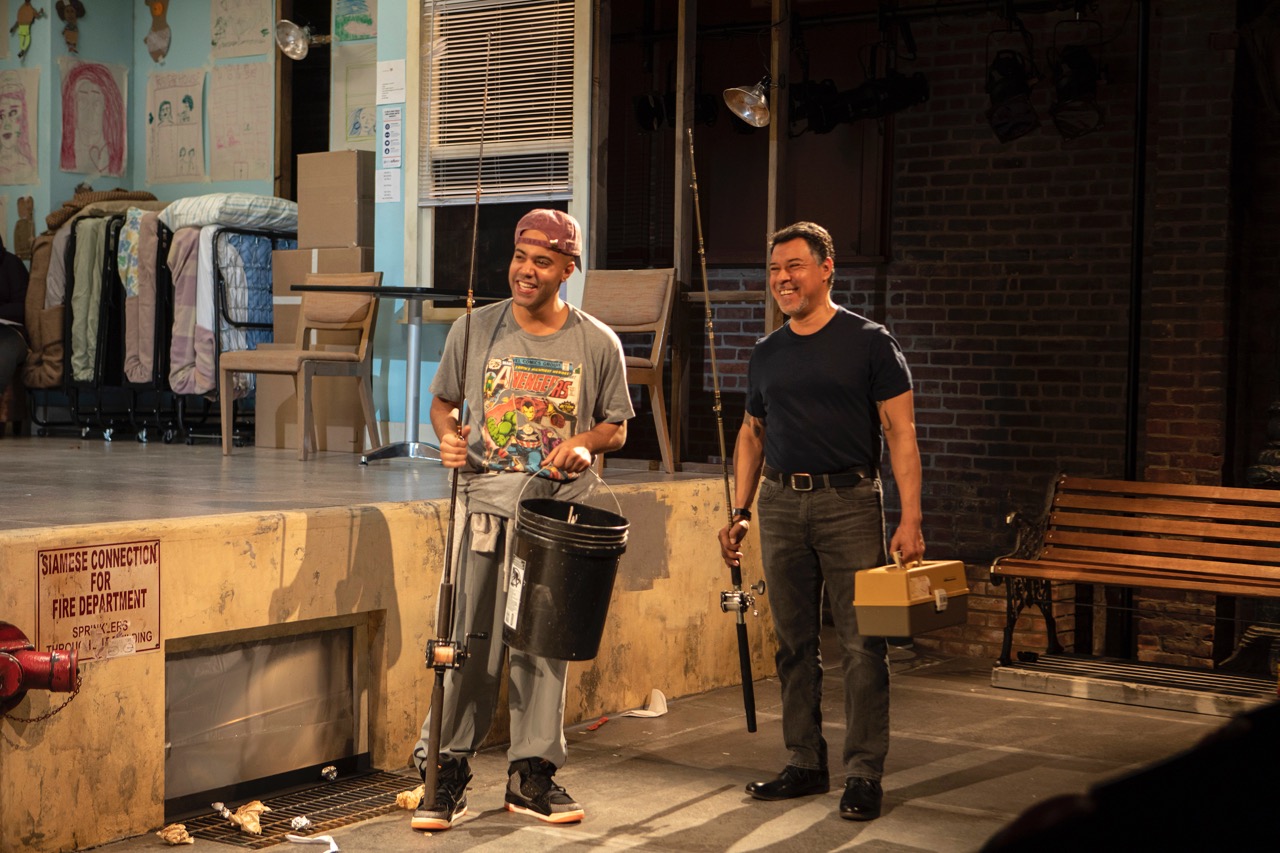 Safety requires this anonymity: 340 is Hope House, a government-funded shelter for women fleeing abusive men and crushing pasts. Bellicose exes sometimes turn up demanding to see their wives or girlfriends; Father Miguel (David Anzuelo) and the manager Miss Rivera (Elizabeth Rodriguez) fend them off, but the enduring traumas prove harder to repel. 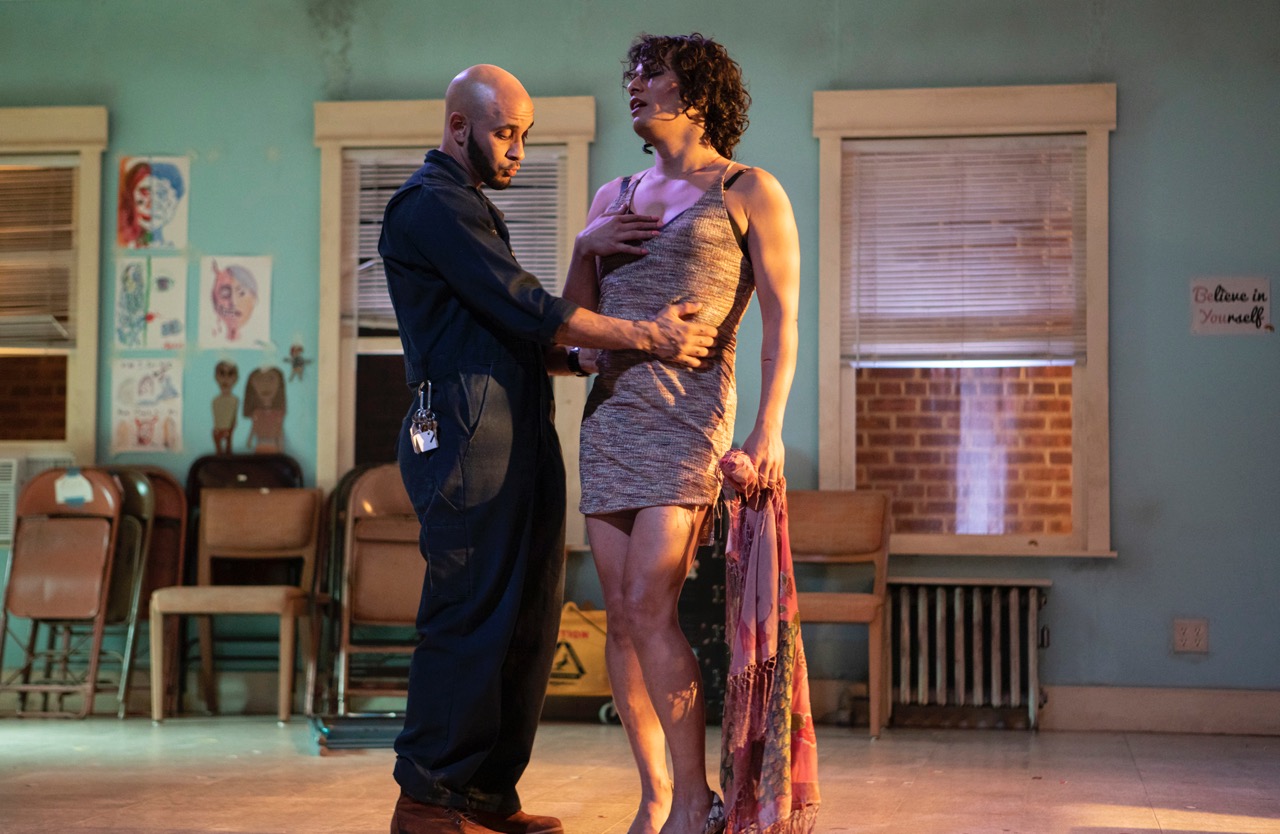 Halfway Bitches spreads the drama across a broad social panorama, probing alliances and conflicts among the women residents and the home’s stewards (some of them men). With a constellation of twenty characters, director John Ortiz’s production can feel like a traffic circle of entering and exiting actors. But the ensemble is potent; nearly every personality draws us in. 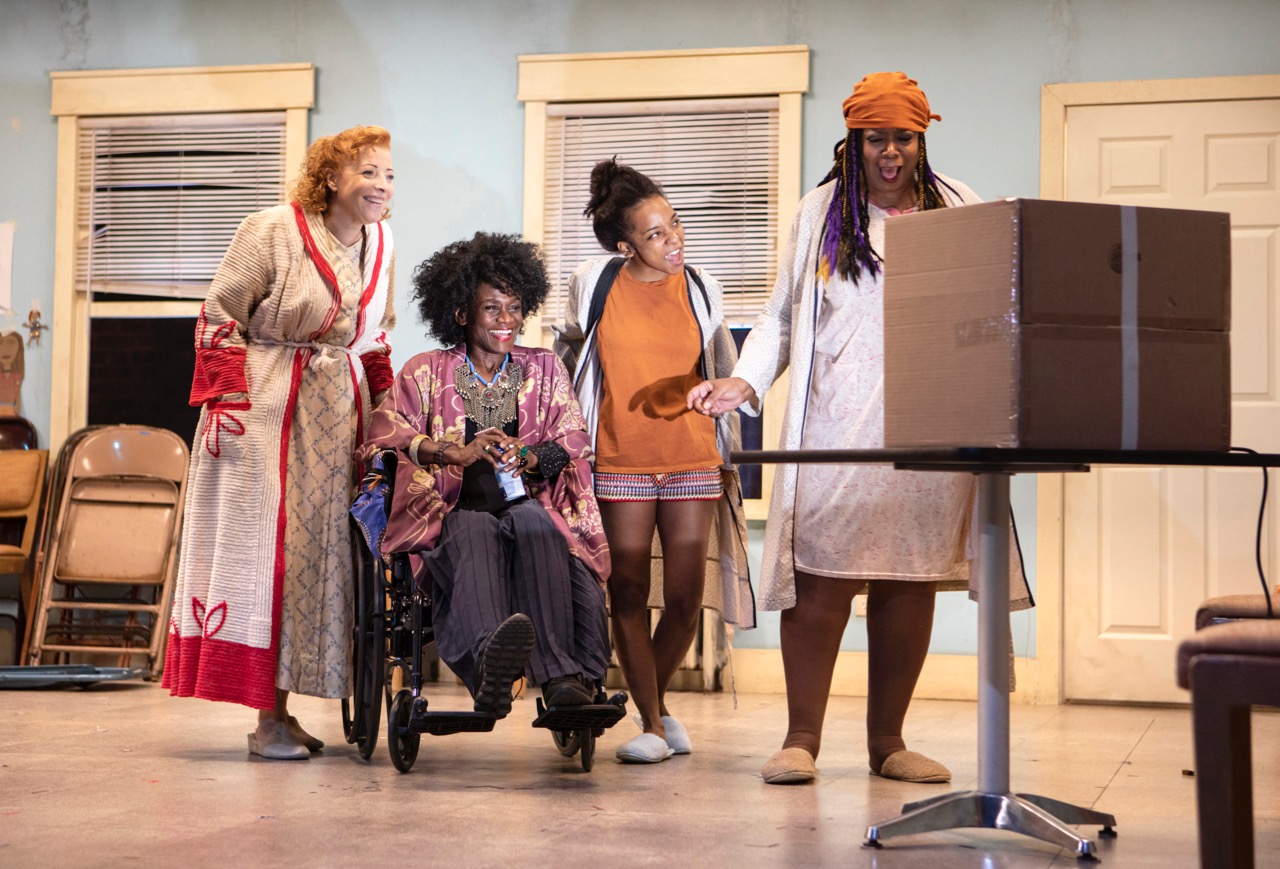 Venus Ramirez (Esteban Andres Cruz), a trans woman, is recovering from a brutal home life while fighting for acceptance from the others. Wanda Wheels (Patrice Johnson Chevannes) now mostly sneaks drinks in her wheelchair, cut off from her show-business past. Taina (Viviana Valeria) protects her damaged mother (Wilemina Olivia-Garcia), while longing to accept a college scholarship. When Bella (Andrea Syglowski), a former stripper battling addiction while caring for a baby, starts using again and vanishes, it exposes the danger behind the women’s stasis. Hope House is for transitional support, but most of them teeter on the edge of breakdown, addiction, or suicide; Bella’s disappearance unsettles the house. 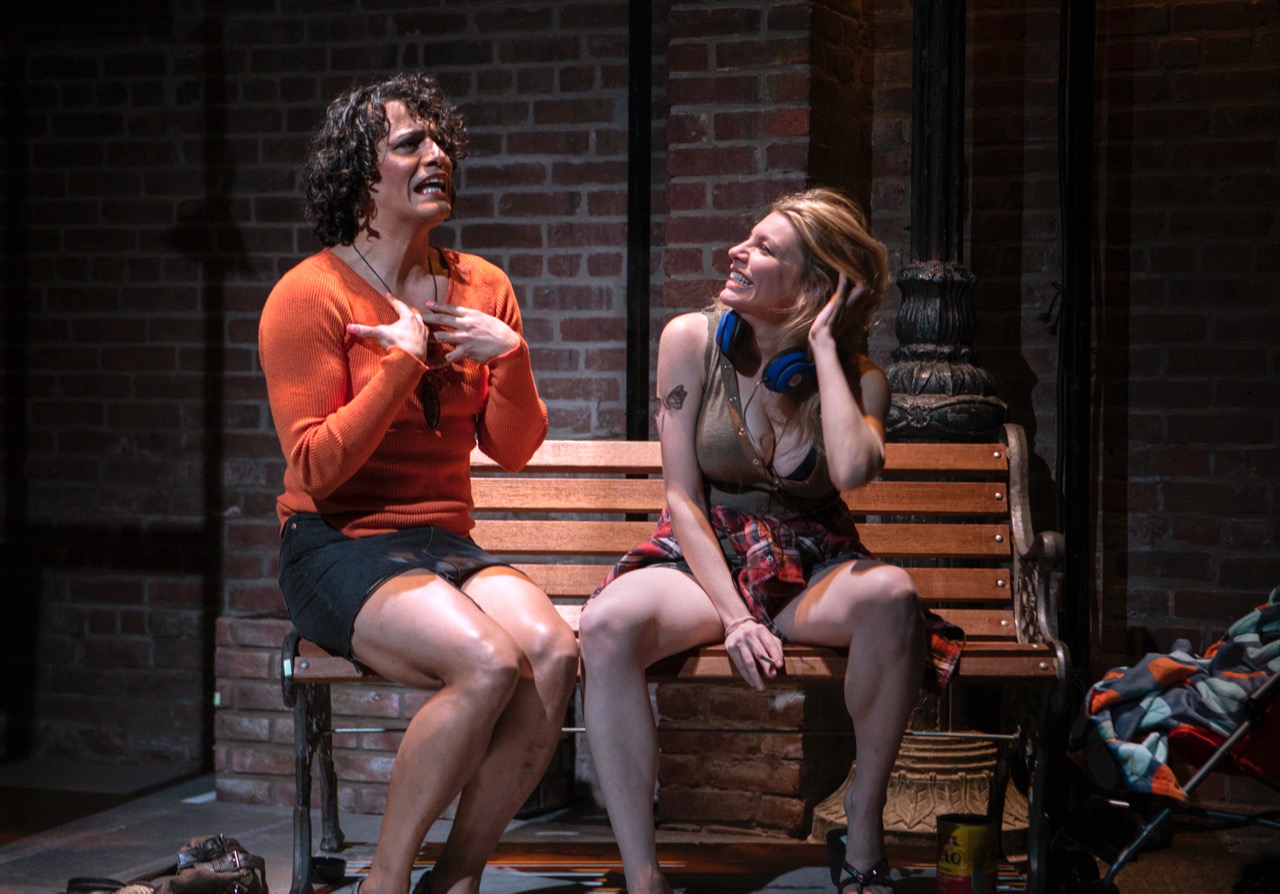 With so many damaged souls telling their stories, Halfway Bitches frequently points to the social issues that afflict them. Homelessness, hunger, eating disorders, homophobia, transphobia, domestic violence, sexual abuse, racism, mental illness, and addiction all shadow the women’s lives. In community, though, they find some solace; one of the play’s great revelations is that so many of them discover love and a sense of belonging at Hope House—making it hard to move on. Guirgis’s tapestry brings to mind a lineage of past plays about hard-up people finding meaningful ties in places rife with disillusionment—from Gorky’s The Lower Depths to O’Neill’s The Iceman Cometh. Like those plays, the sheer number of characters stretches and sometimes strains the dramatic fabric; yet here the playwright carefully calls attention to the valorous qualities of each Hope House dweller, even in the more compressed vignettes.

In his previous work Guirgis has never shied away from the grim or depressing aspects of his characters’ lives—in fact he often underlines extreme thoughts and deeds induced by deprivation. But his earlier plays emphasized the power of speech (especially humorous wordplay) to create dignity—holding out the possibility that rugged individualism could prevail even in a rigged system. Halfway Bitches takes a starker view, maybe because the playwright turns to mostly female protagonists with far less power in their world. Yes, Guirgis’s trademark rapid-fire hurling of elaborate insults amuses, as it always does. (Venus’s riposte to her harassers is typical: “Yo Mobo—don’t call Bellevue, call Wringling Brothers—put these two circus bitches in the Clown Car sweeping Elephant poo.”) But there are fewer such scenes than in Motherfucker, and moments of verbal self-possession quickly recede, though the two teenagers, Mateo (Sean Carvajal) and Little Melba Diaz (Kara Young), both aspire to poetry and art. (The title comes from Little Melba’s spoken-word ode to the home.) Wanda even cautions Mateo to write instead of expressing emotion in public: “Put it on the paper. Rage. Love. Pettiness. Kindness. . . . That’s the safe place to have your feelings—not here.” 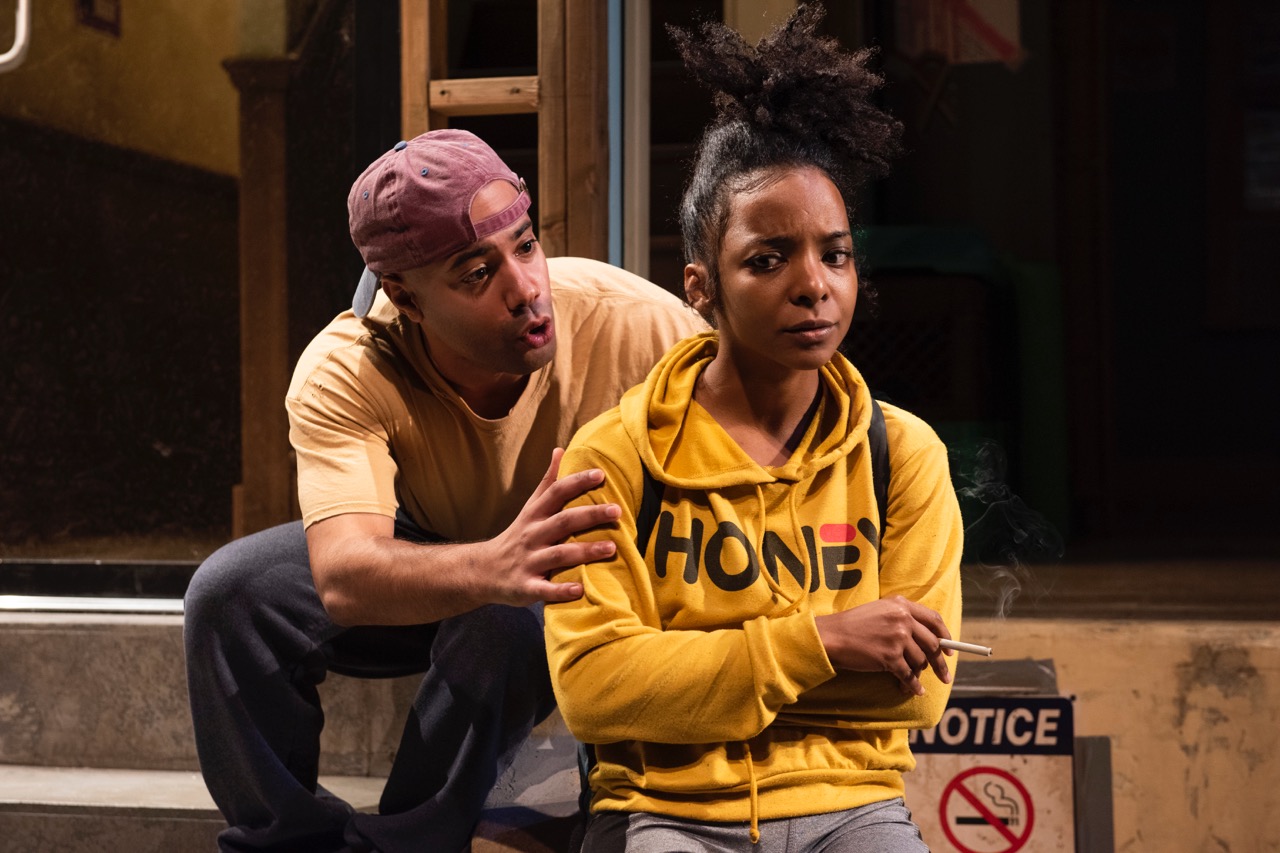 Guirgis occasionally lets scenes extend after fulfilling their narrative purpose. And—perhaps a related quality—some characters self-psychologize in that special way that oversharing talkers in American drama do. A few personalities feel familiar from the outset, too easily flagged—the beleaguered but flinty and caring Miss Rivera, for instance, or Jennifer, a patronizing white Columbia grad in her first counseling job (Molly Collier). Mostly, however, Guirgis offers fuller portraits, women whose contradictions emerge more slowly, making them more rewarding to discover: Sarge (Liza Colón-Zayas), a hard-nosed Iraq war vet, bullies the other residents relentlessly to conceal her damaged tenderness; when we perceive her capacity for love, we realize how her anger assuages pain and losses. (Colón-Zayas brings terrific verve and tenacity to the role.) 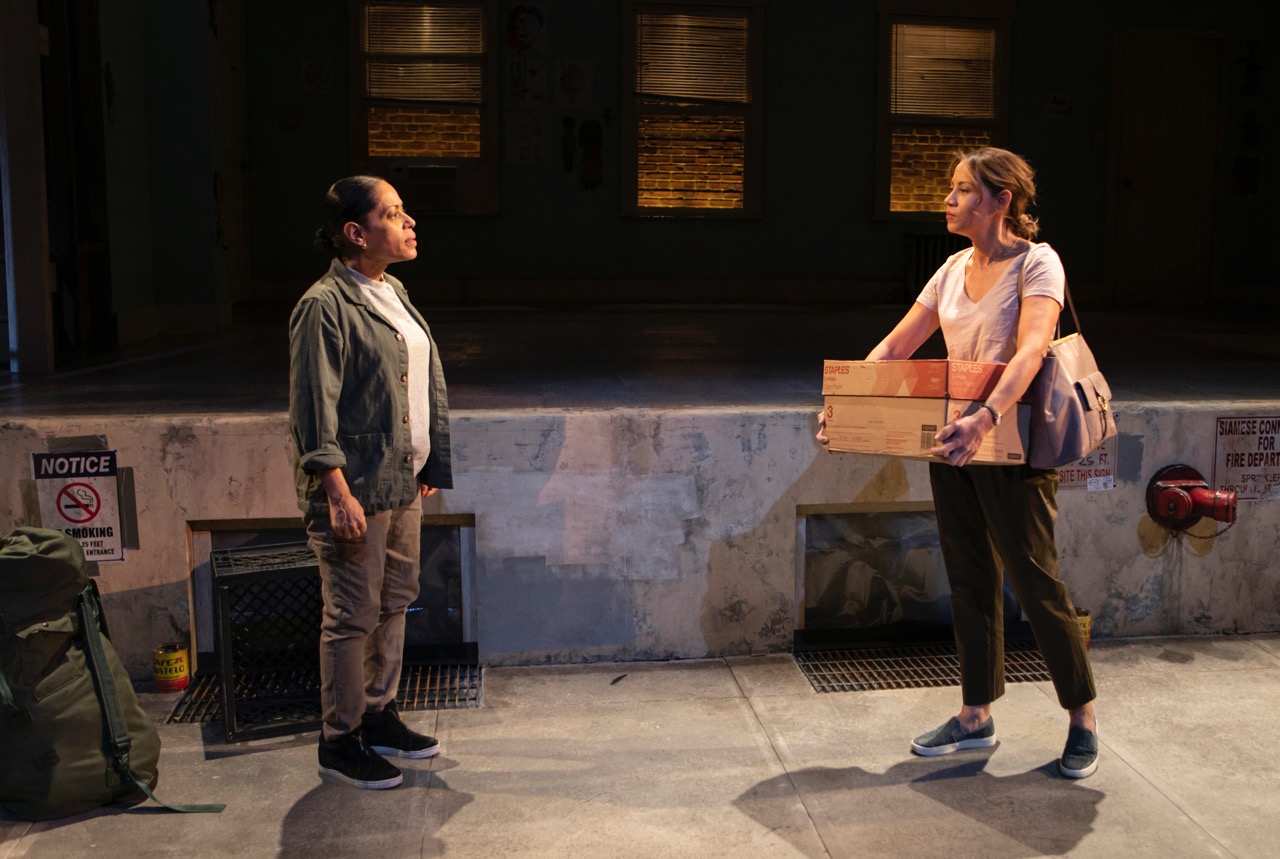 What remains, after dwelling in Hope House for a few hours, is a moving sense of the ubiquity and shared nature of their struggle. For all their conflicts, the residents and staff remain strikingly connected and thoroughly interdependent: all genders, all races, all ages. Guirgis invests them with compassion but doesn’t spare any frankness about their flaws and delusions. That’s not to imply, however, that Halfway Bitches has much room for sentiment: Guirgis could certainly end with a scene of solidarity, but instead chooses an image of abandonment and loneliness, as Sarge, cast off by the system and desperate to be seen, reluctantly perches on the stoop and asks for spare change. Her face—like the building she sits in front of—might be anonymous to passersby, but there’s a story behind the facade if anyone cares to hear it.

Tom Sellar, a writer, dramaturg, and curator, is editor of Yale’s journal Theater. His arts writing and criticism have appeared in national publications including Artforum, BOMB, the New York Times, the Guardian, TheatreForum, and American Theatre. From 2001–16 he was a frequent contributor to the Village Voice.