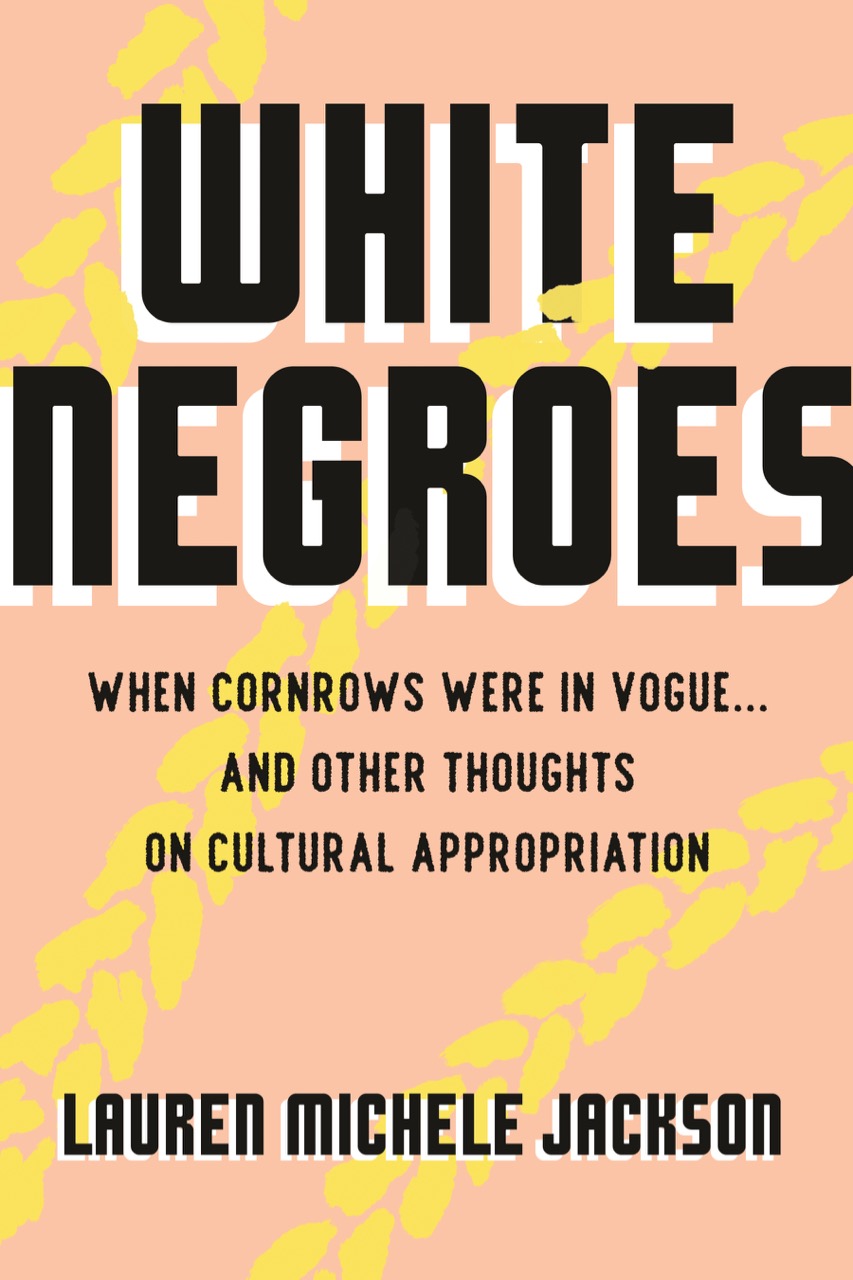 White Negroes: When Cornrows Were in Vogue . . . and Other Thoughts on Cultural Appropriation, by Lauren Michele Jackson, Beacon Press,
187 pages, $25.95

Classically phallocentric, Norman Mailer suffered a sabotaging, chronic, even dispositional impulsion toward sex, a subject that obsessed and confounded him. With his writing, he searched American erotics for “any genuinely radical conception of a different world,” a quest that soon atrophied into something vulgar and conservative. Racism, sexism, and homophobia—all are articulated in “The White Negro,” his 1957 essay for Dissent. The title refers to midcentury hipsters—it was their “desire for absolute sexual freedom” that Mailer frisked for transformative possibility—whom Mailer suspected of emulating the Negro’s (supposed) sexual surplus. “The Negro,” he wrote, “kept for his survival the art of the primitive . . . relinquishing the pleasures of the mind for the more obligatory pleasures of the body.” The essay became Mailer’s most enduring pronouncement regarding the American psychosexual landscape—his most revealing, too. “Paging Dr. Freud!”

Or, rather, paging Dr. Lauren Michele Jackson, author of White Negroes: When Cornrows Were in Vogue . . . and Other Thoughts on Cultural Appropriation. It’s a thrilling, risqué name for a book, and with it Jackson, a black woman, enacts some appropriation of her own: her recasting of a witless instance of rhetoric (the absurd impossibility of a white Negro) to introduce a work that damns its subject (and, by extension, its inventor) is a moment of genius. The choice of such a title also demonstrates her refreshingly literal understanding of appropriation, as presented in her introduction: “The word, centuries old, denotes an act of transport—some item or motif or a bit of property changing hands. . . . Taking only the root of the word, the meaning seems clear. To make something appropriate for another context.”

White Negroes has a context of its own: it arrives on the scene of our wrecked national subconscious, bearing with it a heroic, custodial air. Jackson has been a canny adjudicator of cultural appropriation for some years—with articles on the matter appearing widely across the internet—but this volume, which includes adapted as well as new essays of cultural criticism, is the most sustained, elegant, and righteous application yet of her analytical skill. Even if insights like “the practice of repurposing culture is as old as culture itself” can read as deceptively self-evident, this is only because Jackson’s slim, lucid volume is meant as an accessible and methodical treatment of its subject. Its chapters are styled as case studies (“The Pop Star,” “The Hipster,” “The Activist,” etc.) within four sections arranged by theme: “Sound and Body,” “Art and Language,” “Technology,” and “Economy and Politics.” The introduction, “Appropriation and American Mythmaking,” is probably the book’s most conceptually rigorous portion, containing a condensed précis of the arguments to follow and establishing the stakes for Jackson’s project.

Those stakes are high. Jackson’s essays are curious “about the desire for black culture by people who are not black.” These people tend to be white; their desire, historically malevolent. To communicate their injurious, underlying motives, Jackson cites instances as disparate as Dana Schutz’s Open Casket from the scandalous 2017 Whitney Biennial (“Schutz doesn’t attend to the ongoing virality of death; she dilates it”) and Christina Aguilera’s turn to black sonics and image for her 2002 studio album, Stripped. “She consumes not blackness but the idea of black aesthetics,” Jackson writes, introducing a crucial difference between the matter of black life and its often exploitative representation in the name of “Art.” Jackson’s observations are usually this sound, but one wonders whether her topic is exhausted. The experience of reading White Negroes, then, is one of vague déjà vu, a sense of having encountered before if not precisely Jackson’s phrases and ideas then certainly something like them, though perhaps less elegant: written without the privileged anterior perspective of 2019.

But White Negroes also marks a departure from a genre instantiated by Greg Tate, the editor of 2003’s Everything But the Burden: What White People Are Taking From Black Culture, a tome featuring essays with relentlessly provocative, archly satirical titles like Tate’s own “Nigs R Us.” Tate’s volume also resuscitated Mailer’s white Negro, in name and form—but only to slay it again, shredding the figure with slicing irony and hectoring humor. “Wigga,” for instance, today an awkward, unbearable moniker, appears in Tate’s essay almost immediately in scare quotes. (Eminem is the subject of the book’s first chapter.) No such ironizing distance in Jackson’s dealings with Mailer’s locution. Indeed, her contribution to this minor canon of appropriation and its discontents is really a maverick turn: non-intervention. She offers an update to Mailer while not bothering to disarm his infamous misnomer—even when the easier, and historically popular, thing to do is to traduce it unequivocally (as James Baldwin had, in an odd and tender account of his friendship with Mailer entitled “The Black Boy Looks at the White Boy”). For she agrees with Mailer that enculturation owes an essential, and probably existential, debt to black culture—but she differs in arguing that there is something fetishistic, and even body-snatching, in the hipster’s pilfering predilection.

Passages in White Negroes can thus recall the premise of Jordan Peele’s Get Out, a film in which white members of the professional-managerial class aspire to the “innate” chic of black youth not through emulation, but rather by possession. “Liberal white Americans,” Jackson writes, “still suppose black people might be the key to the gateway away from conformity.” Their “speaking the language of hip,” she adds, “learning it on their tongue, seems one step closer to being interesting and distinct from their upbringing and destiny. White people speak black to feel alive—to feel real.”

Savvy and penetrating, the analysis rings true, performing something like the psychoanalysis of a specific breed of white psyche, a cast of mind developed and coincident with European incursions into Africa and the larger Global South. But one wants Jackson to say more, to elaborate in particular her notion (persuasive to me) of the unreality of whiteness. Here she might summon the wisdom of critical race theory, whose theorists have conceptualized whiteness as an ever-unfulfilled mandate, even for its own constituents. A condition to be aspired to but by necessity never attained, it is a status so exclusionary as to deny its own architects’ claims thereto; antinomies thus abound in this region of being, such that whiteness may be achieved by annexing the causes and customs of others. An understanding of whites’ cultural appropriation would only gain, I suspect, from this perspective, which considers whiteness as an existential category therefore predicated on its own impossibility. This aporia, fatally irresolvable, implies a lack: whiteness without whiteness, whiteness in search of itself. It’s a tense, circuitous quest, often uncovering some irreducible, unassimilable else: black culture, more often than not, pillaged and plundered since history became modern.

Lake Micah edits at Simon & Schuster and is a freelance writer on literature and the arts.