“History is about to crack wide open”—Tony Kushner’s incomparable epic returns to Broadway. 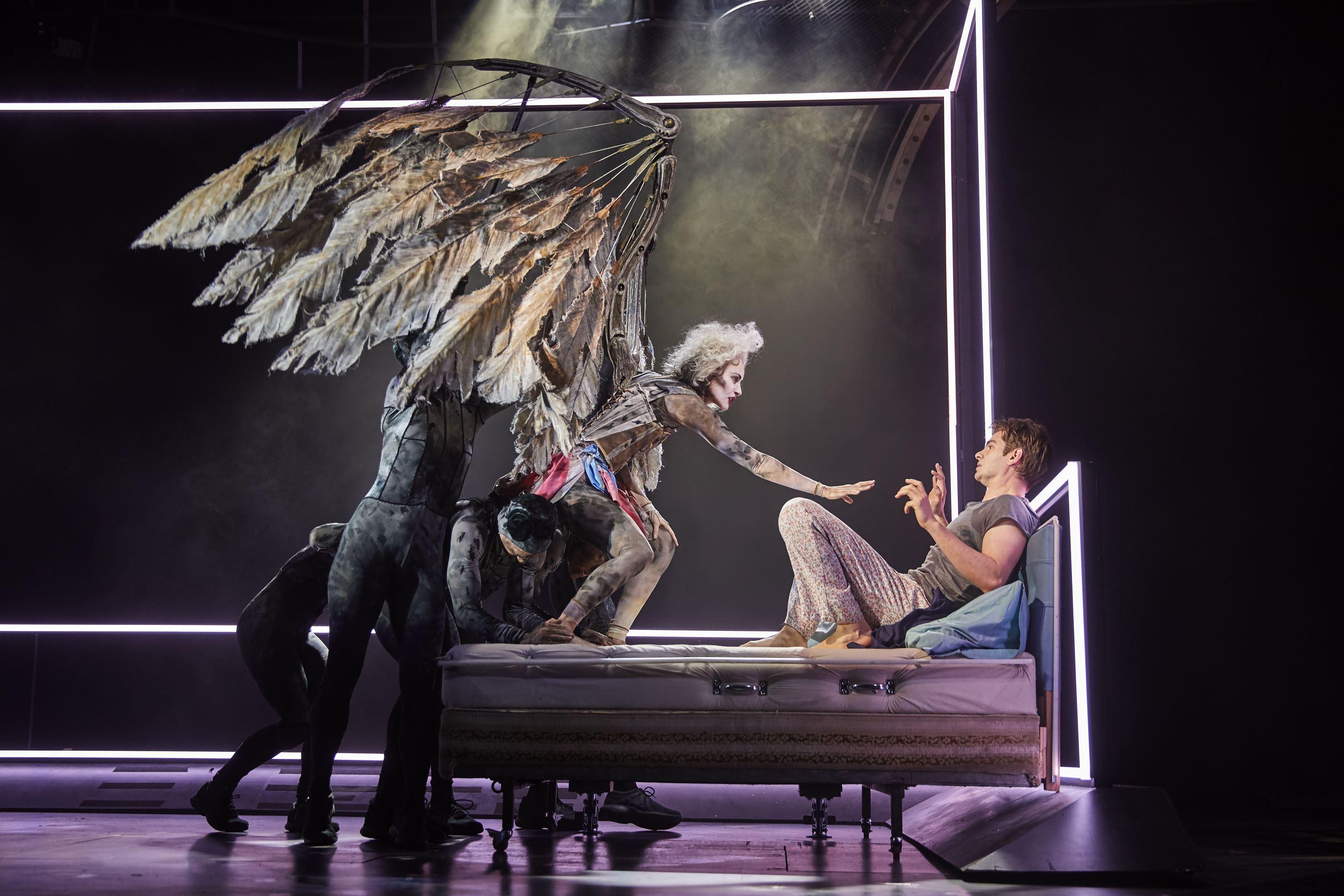 The soberest critics among us have merely called Tony Kushner’s 1993 cultural juggernaut Angels in America the greatest theatrical work of its decade. Catch us when we’re reeling under its direct influence, though, and we say that its component plays Millennium Approaches and Perestroika tower over the whole twentieth century. We claim that Angels rescued theater from both elitist obscurantism and boulevardier irrelevance, and that it changed the country’s attitude about AIDS. Even the rare voices that criticize it tend to do so because of its dominance. Is it sufficiently radical? Can a drama about four gay white men and their (black or female) helpmeets dare call itself universal? But—what other play raises concerns like these? We argue over whether it effects change or reflects a 325 million–person nation, the sorts of worries we usually reserve for religious texts or the Democratic platform.

Now Angels is back on Broadway after twenty-five years. It hasn’t exactly been hiding—off-Broadway’s Signature Theatre produced the diptych in 2010, a Toneelgroep Amsterdam tour came by the Brooklyn Academy of Music in 2014, Teatro Público played it in San Juan last year. HBO made the miniseries with Al Pacino and Meryl Streep. But Broadway is part of the Angels savior myth: if serious drama can survive in that flashy Disneyfied wasteland, then all’s not lost. This time, it’s the National Theatre’s absorbing production, imported nearly unaltered from London, that will have to fight for a tourist crowd. Will they come? Kushner’s masterpiece is a joy to watch, but it’s also, admittedly, a labor: both plays seen back-to-back on a Saturday took, with dinner break, ten hours. 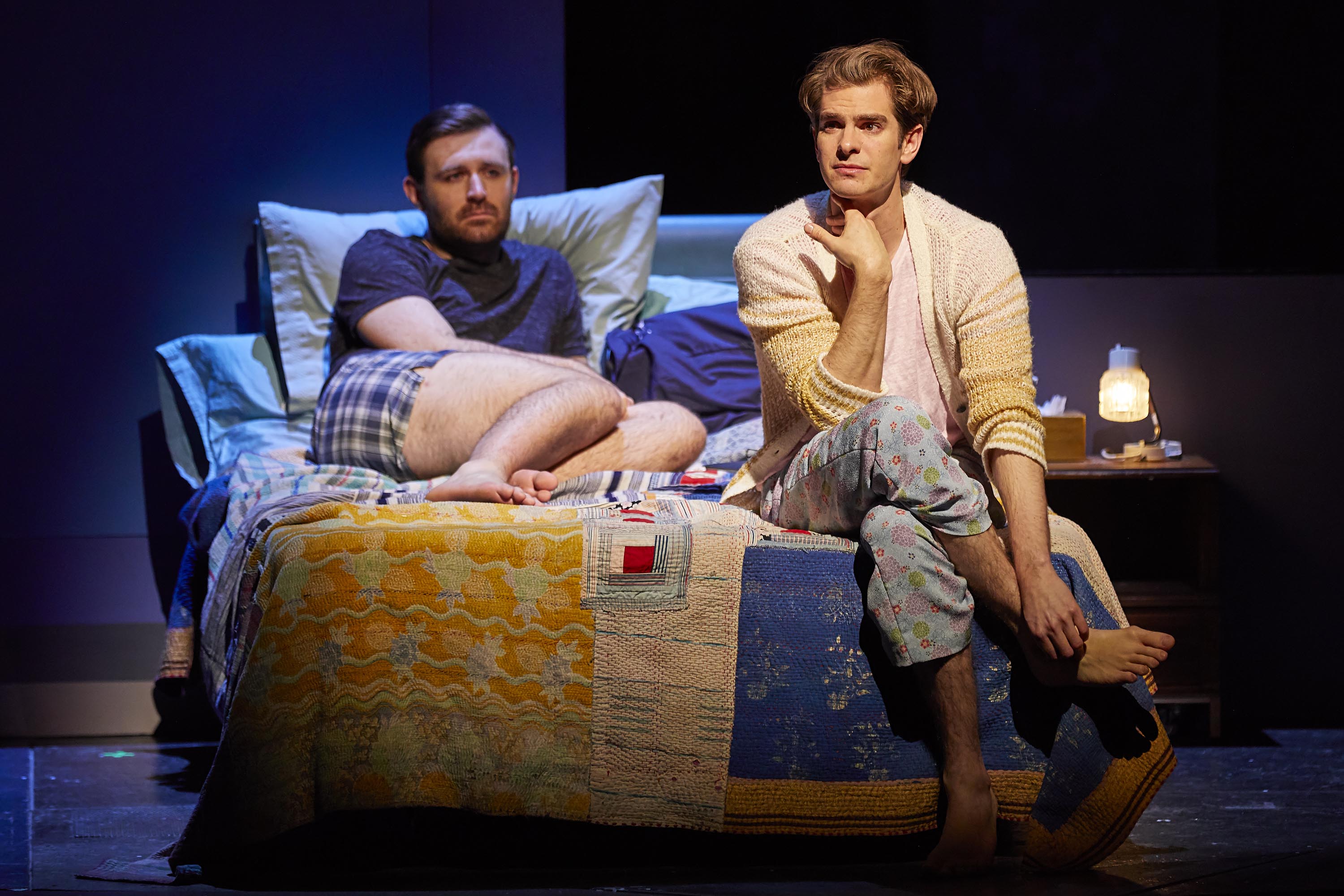 Angels—subtitled A Gay Fantasia on National Themes—is a modern war play: humanity against HIV. Millennium Approaches is set in 1985, so when the curtain rises, the virus controls the field. It has infected both our hero, the wry and valiant Prior (Andrew Garfield), and our antihero, the real-life lawyer-monster Roy Cohn (Nathan Lane)—and in those early years, no one could win against it. Still, it’s the way each man wrestles with the plague—either with grace or denial—that forms the play’s central contest. Prior’s spiritual sight is clear, while Cohn, raddled with cowardice more than illness, swears he isn’t gay, that it isn’t AIDS, that he’s got “liver cancer.” He delivers profane, homophobic, Machiavellian arias, but his body, in the end, doesn’t pay much mind to his politics. 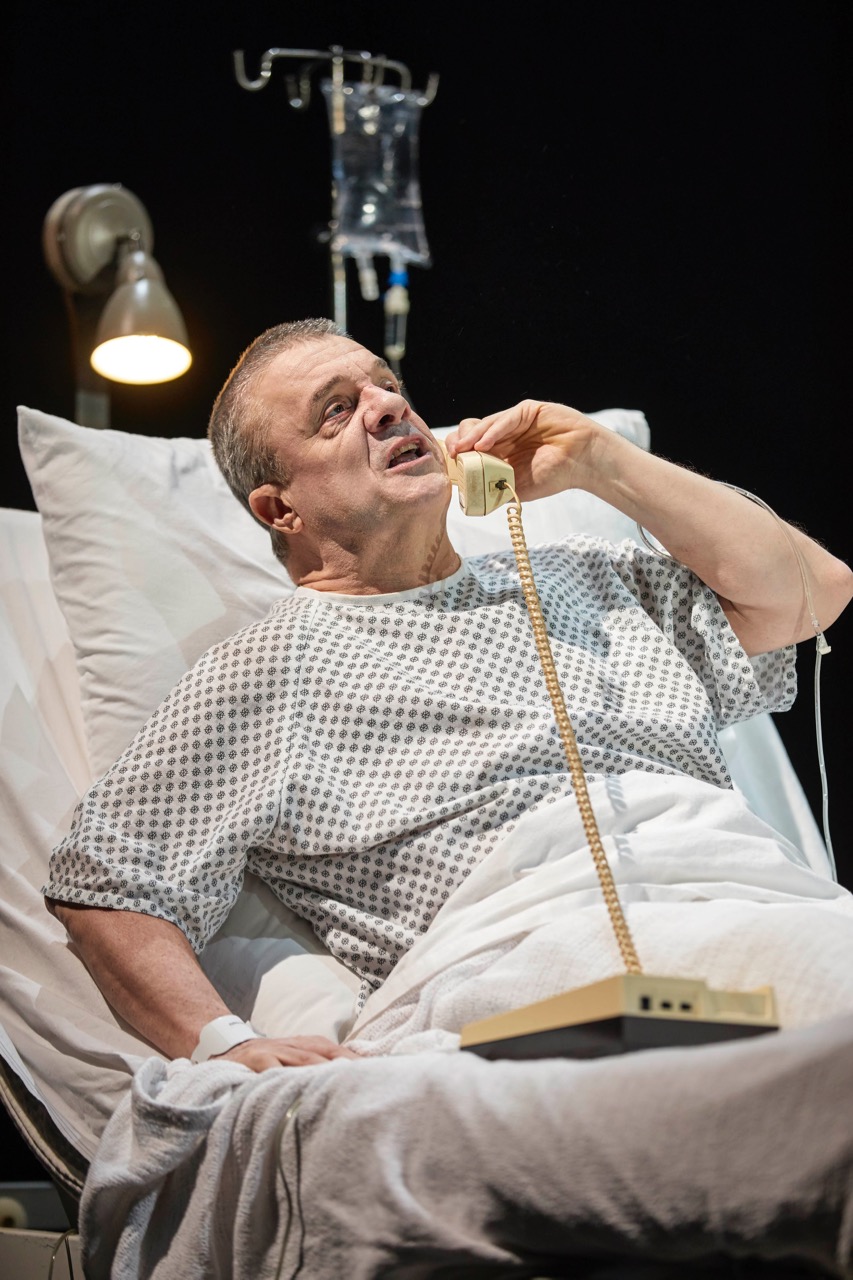 “I wish I was an octopus, a fucking octopus!” Cohn cries, as he stabs at the phone he’ll cling to even on his deathbed. Not coincidentally, there are eight players in Angels, each with their own plot. Prior hears angelic voices (“Prepare the way!”); his hectically verbose lover Louis (James McArdle) fails his first moral test and abandons him; Cohn’s closeted Mormon protégé Joe (Lee Pace) can’t keep away from the delectably guilt-ravaged Louis; and Joe’s devastated wife Harper (Denise Gough) is blasted out of her mind on Valium. Joe’s mother Hannah (Susan Brown) arrives late to give her tart pronouncements on Joe’s coming out, and then there’s the saintly nurse and ex-drag queen Belize (Nathan Stewart-Jarrett), the only Kushner character that hasn’t aged gracefully. (Stewart-Jarrett’s wonderful, but the role was written with enough sassy “magical negro” qualities that a 2018 mind flinches.) Finally, of course, there’s the Angel (Amanda Lawrence). In most productions, the Angel is presented as a stately, white-robed demigoddess, but director Marianne Elliott wipes all the ectoplasmic glory off and makes her a grubby, tired, busted creature. Puppeteers animate her enormous, twelve-foot-spread wings, while she crouches and prowls on Prior’s bed like a stray. 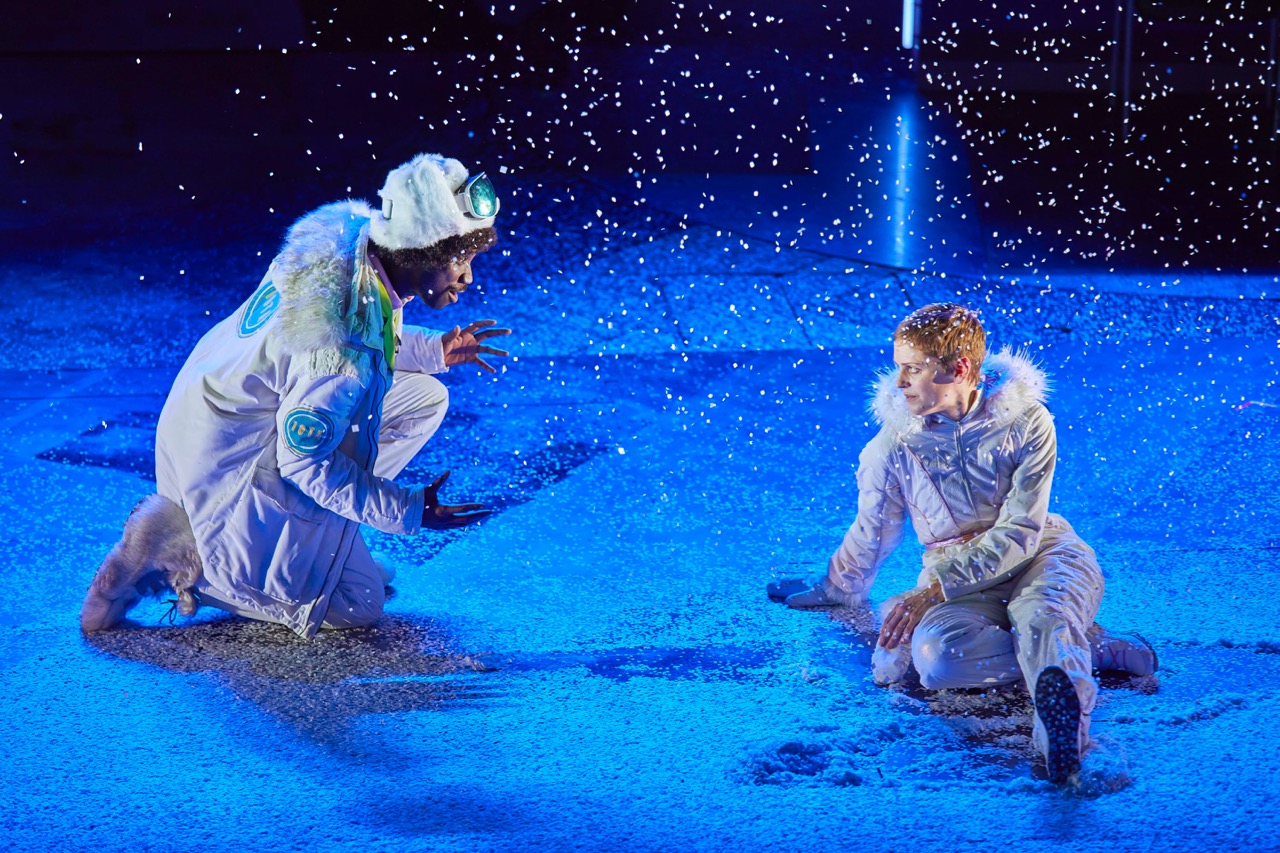 The first play is all tease and preparation: it ends with Louis and Joe finally touching each other and the Angel crashing to earth after a lot of seraphic throat-clearing. The second play unwinds the first one’s promises—the romantic relationships all burn away, and Prior goes to heaven to hear the Angel’s gospel. The play encourages you to think precisely, and so it’s worth saying that not every minute flashes by, and that Kushner’s brilliance, after all his many adjustments, still wavers in the never-perfected Perestroika. I also find that Elliott’s swift-moving production sometimes sways toward sentimentalism. She layers in Adrian Sutton’s pompously cinematic music, which crescendos to loud chords at the act-breaks; the play cringes whenever Kushner’s poor-theater aesthetic is punched aside by something so blatantly Hollywood. Yet in the face of this hurly-burly, Garfield delivers a performance of absolute clarion rightness—exaggerated but clear, fey and elaborate. Elsewhere the suite of starry actors hasn’t yet welded itself into a true company: Lane’s gorgeous, but he could be in a one-man show; Pace and McArdle strike erotic sparks, but he and Gough never make a real connection. Yet these little quibbles don’t stain the glory one jot. This Visitation is unmissable. 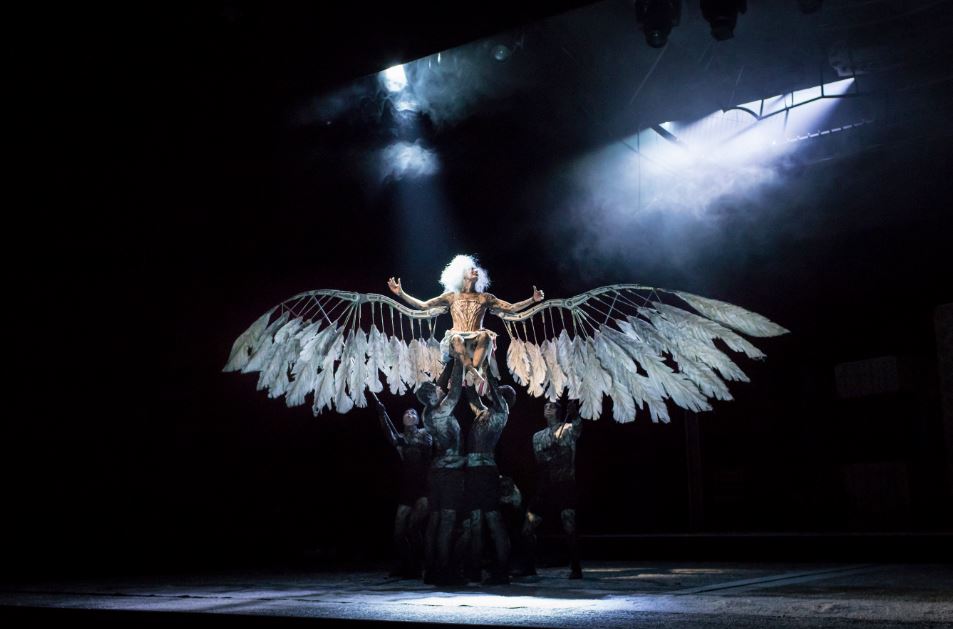 Angels is incomparable because we don’t have other seven-and-a-half-hour plays to compare it with. Those who say it’s like binge-watching a television series or reading a novel are leaving out how totally theatrical Kushner’s imagination is here—like dramas from Hamlet to Harvey, it engages deeply with presence and non-presence, the way that flesh and spirit can appear together in front of a trembling, breathing crowd. It’s a whole variety show of genres: Borscht Belt–flavored comedy (there’s a tart introduction by a rabbi) and Shakespearean romance (couples exchange partners) and Shaw’s Don Juan in Hell sequence (a supernatural argument about social philosophy). It’s a play about physical deterioration that exhausts its viewers; a play about the work of rebuilding a civic system that deliberately “malfunctions” dramaturgically in its second half. And it contradicts itself mercilessly. Despite excoriating individualism, it gives us the ultimate hero/Prophet/Christ figure in Prior. Despite dissecting American exceptionalism, it ends on a note of pluralist uplift and the new Apple Pie. But this complexity and self-examination is the point. Angels is a play that makes you feel, certainly, but it does this in two ways: by making you sympathize with characters in trouble (theater’s usual trick), but also by making you think as hard as you can to follow and counter its rhetoric, a task as exhilarating as sprinting full out, your heart in your mouth. 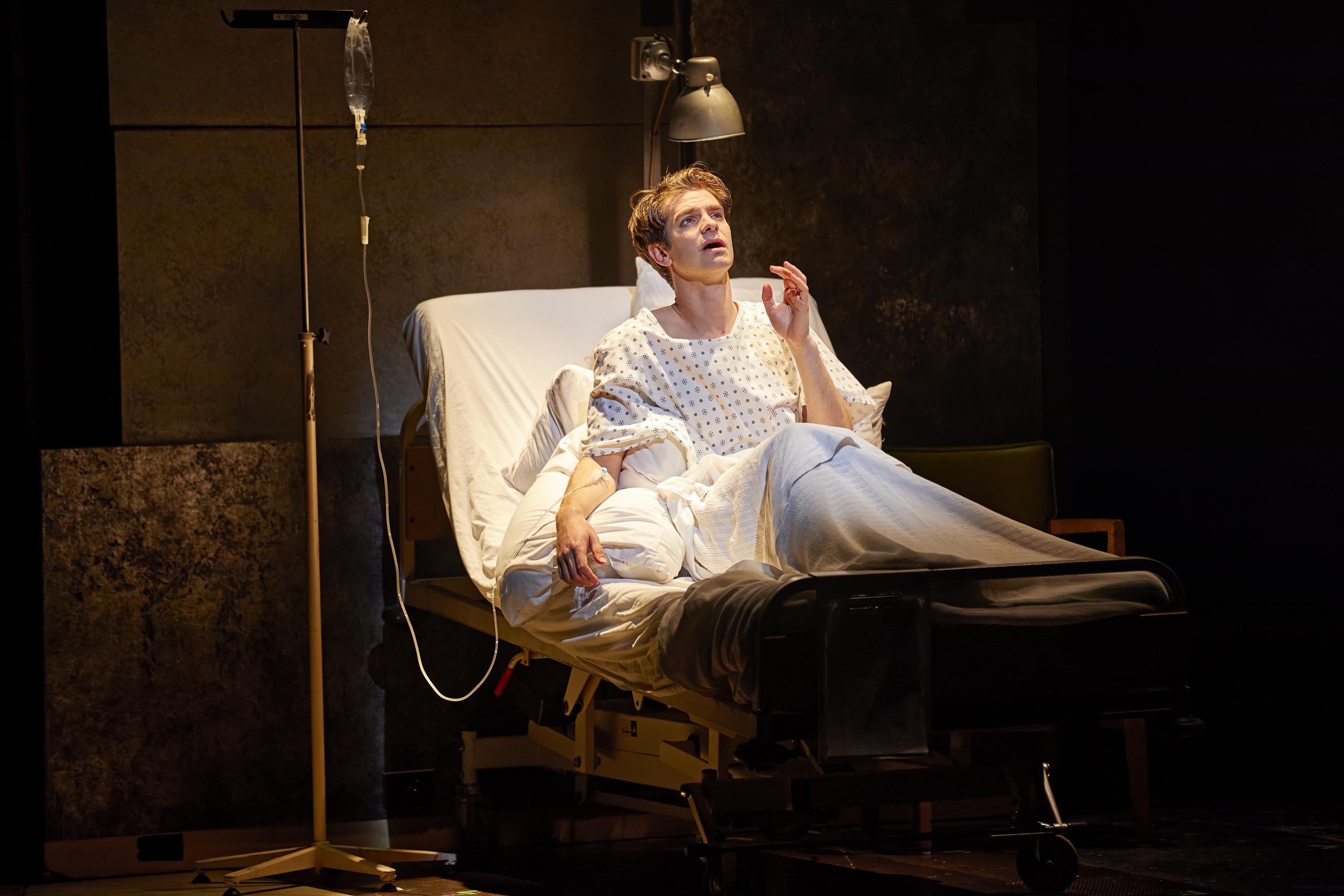 One of Kushner’s prophesying visions announces that “History is about to crack wide open”—and his bombast can be contagious. It’s difficult not to borrow its swagger; you can sense it happening, but it’s irresistible. “The Great Work begins!” cries Prior, and this phrase sinks down into your brain and sinew only to shock you awake in the days following the play. So what is the Work? Kushner wasn’t clear, and the intervening years—when progress has spun backward as well as forward—have made the task even fuzzier. Is it environmentalism? Political change? More life? For each of us it’s different. Still, the real magic of Angels is that somehow the Work does feel tangible to those who sit in the theater. Those who go to hear Kushner’s latter-day testament will once again feel the tools in their hands. Lift them high, comrades! What a blessing to be reminded to use them again.