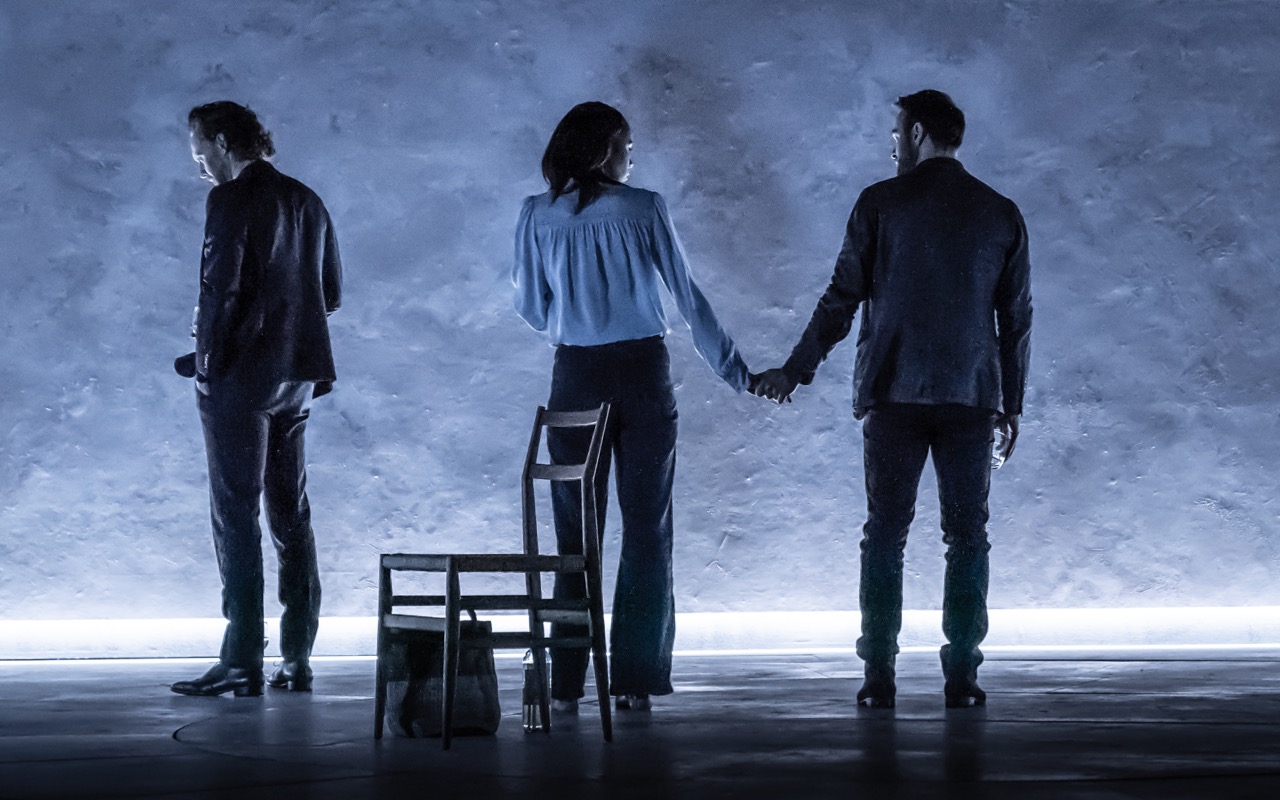 If you’re going to stage something by a famous playwright, for god’s sake, stay cool. It’s fatal to let the weight of reputation bully you into preciousness; “masterpieces” have a bad habit of calcifying on you. The glamorous, clammy revival of Harold Pinter’s Betrayal now on Broadway is a prime cautionary example. It’s so freaked out about being a Pinter play, the production has turned a mischievous and fluid text to stone.

Betrayal is Pinter’s upside-down comedy of manners. The 1978 play runs in reverse; after the first two scenes, acts jump backward in time. We begin by raking over the dead embers of an affair between Emma and Jerry, as the one-time lovers meet for an awkward drink in a pub. While observing the proprieties (he asks about her husband, she asks about his child), they fail, as so many people fail in Pinter, to agree on the details of the past. Emma also has a bombshell to drop: she has finally told everything to her (equally unfaithful) husband Robert. Jerry then flings himself on Robert’s mercy, terrified at losing one of his oldest friends and begging forgiveness for cuckolding his chum for seven years. But Robert laughs in his face. It’s old news; he’s known for ages. 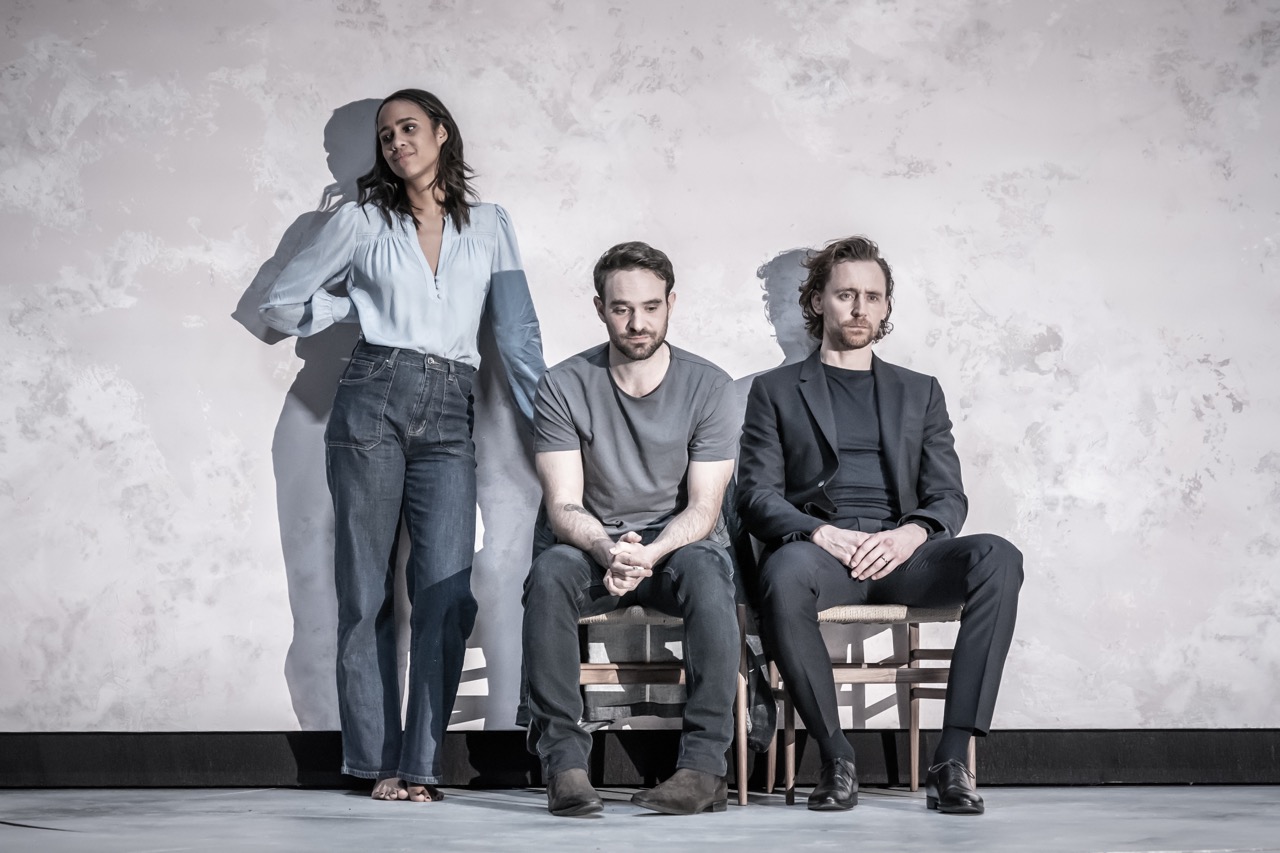 We’re two conversations in and already at five betrayals: the affair itself, Emma breaking silence, Emma’s new extramarital beau (don’t worry about it, we never meet him), Robert’s infidelity, and the revelation of Robert’s lies of omission to Jerry. As the play reveals earlier sequences from the threesome’s story—the end of the affair, the revelation of the affair, and finally the beginning of the affair—betrayals stack up in drifts. The irony gets funnier and sharper and crueler; as we make fools of others, we make clowns of ourselves. Pinter, whose women characters can be opaque and brutish, is particularly scathing about Robert and Jerry’s fall from idealistic poetry-loving students to the pit of bourgeois philistinism. They used to play squash together! And talk about books! Screw marriage, that’s the sort of bond that’s supposed to last.

All that dry wryness has congealed on Broadway. This minimalist British production—directed by Jamie Lloyd for the “Pinter at the Pinter” season earlier this year in London—is as gloomy and glossy as a perfume commercial. (As the curtain rose on the actors in tableau, someone behind me whispered, “This is a very serious play.”) Everyone is dressed to the nines. Set and costume designer Soutra Gilmour puts Tom Hiddleston’s Robert in a narrow blue suit and a sweater so exquisitely greeny-teal that it could make a Caribbean grotto weep. Charlie Cox’s Jerry wears soft gray linen over a T-shirt; Zawe Ashton as Emma dons filmy blue silk and goes shoeless. Gilmour’s set consists of a series of turntables and a beige wall, the elongated version of what you’d find in a photo studio. The trio poses against it, or they let the turntables carry them into pained little groupings. It feels like the audience accidentally showed up at the publicity shoot. 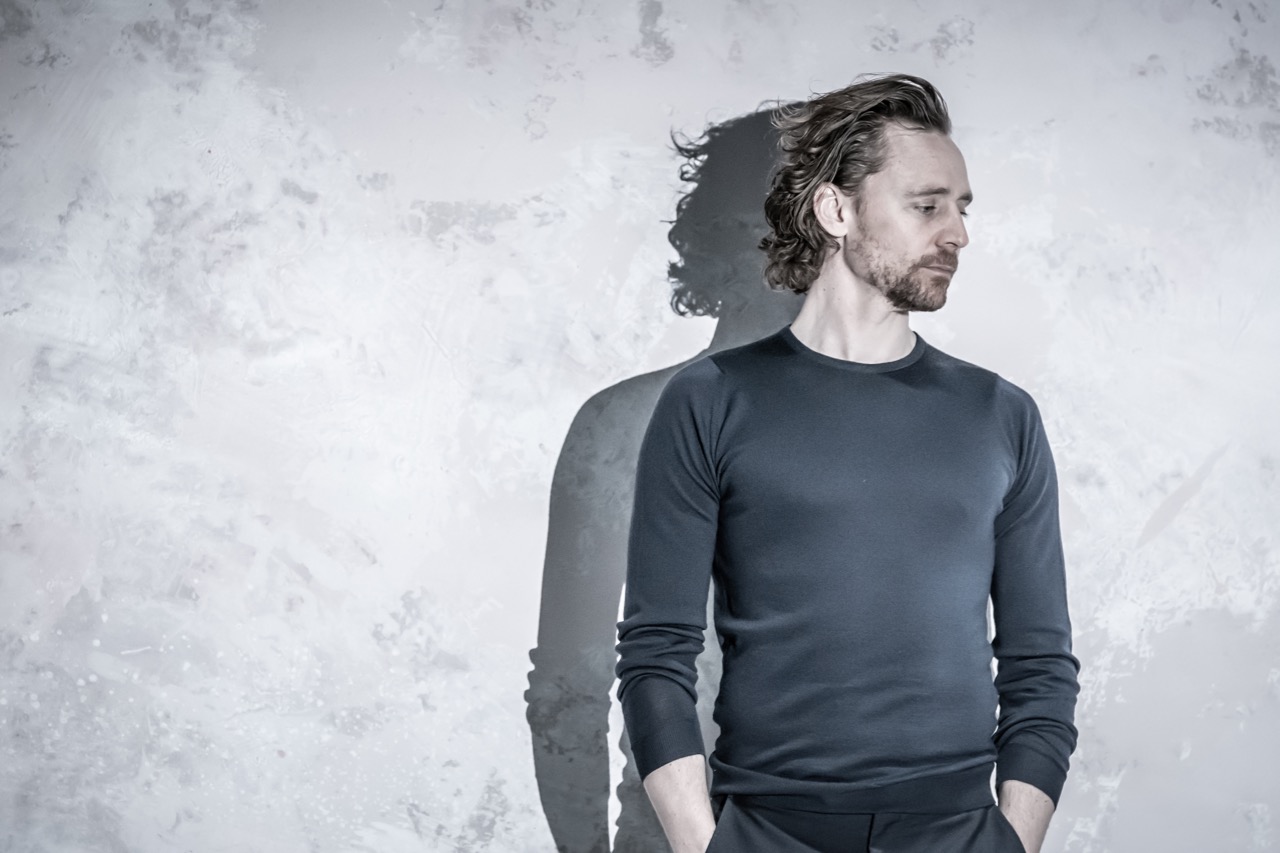 This isn’t to say that the actors don’t hit heights of emotion. In fact, two of them are almost always aiming for those heights—only Cox is wise enough to stay among the foothills. Lloyd seems to be goosing his stars into bigger and bigger displays, which undermine the briskness that can actually make the play so affecting. For instance, Hiddleston breaks down when Robert finds the telltale letter, streaming with unselfconscious tears, and Ashton, after a thousand long moments, caresses his arm in response. If it were an audition, you’d hire them—it’s gorgeous, and Hiddleston in particular has extraordinary gifts. But Pinter wrote the sequence to be as tight and sour as a Restoration comedy, and all this indulgent emotionality simply fights the play. Occasionally, Lloyd has a hilariously lugubrious cover of Depeche Mode’s “Enjoy the Silence” ooze in over the speakers. For all the text’s adult concerns—each marriage is a black box, we betray our own younger selves, beginnings contain their ends—the production is a moody teenager, lost in its own swagger and self-pity. 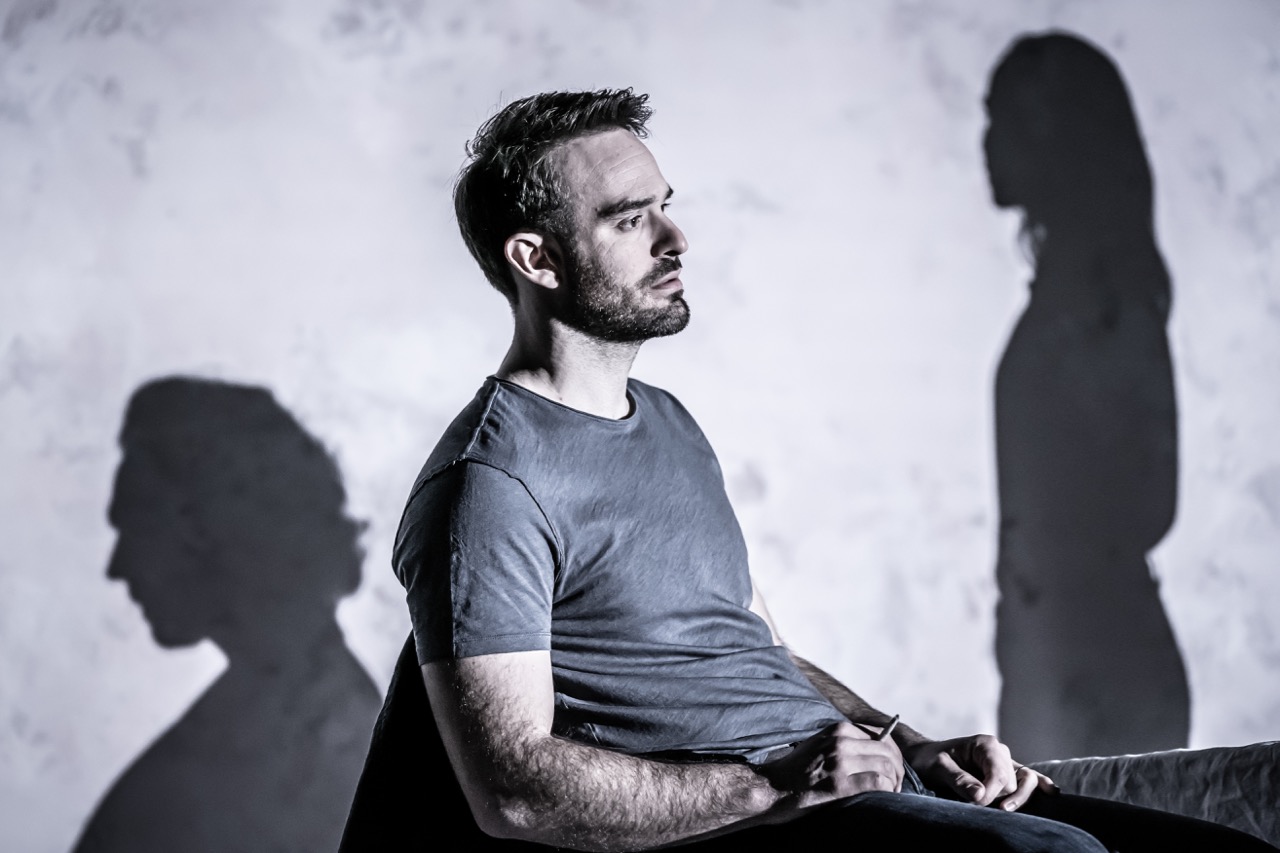 The mistake here is that Lloyd and co. are treating Betrayal as if it were quite a different Pinter. His catalog contains, of course, plays of Beckettian creepiness and otherworldly fear—The Homecoming, with its abrupt reality slippage in the middle, or the deeply mysterious No Man’s Land and Old Times, in which some of the people talking to us might be dead. Pinter loved a pause, everybody knows that, and so all his work has been painted with the brush marked ENIGMA. But while Betrayal has a nonstandard structure, it was written with realistic characters drawn from Pinter’s own life. (He was a Jerry.) He looked at his own circle and his own foibles and stuck the pins in with relish. Slow the play down to a molasses pace, with searching glances and choreographed schmaltz (the final image involves a yearning gesture while a turntable slides the actors apart), and it descends into parody. 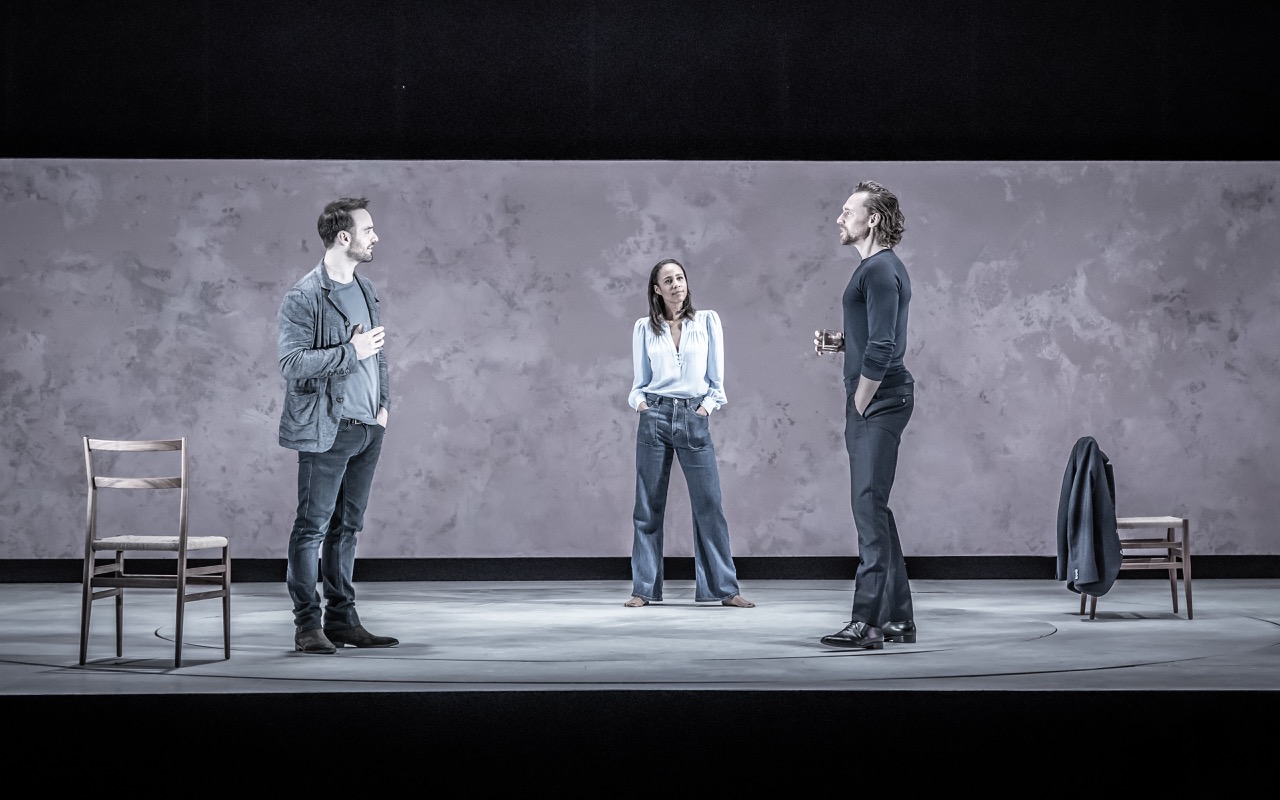 The piercing trick of Betrayal’s backward structure, which shows us the bathetic climax at the beginning, is that it makes the audience into cynics as the characters themselves grow in innocence. If only they knew what we know, we think during the “happy” final scene, they’d never bother loving each other at all. When Pinter was writing Betrayal, he had just published a screenplay (never produced) of Proust’s A Remembrance of Things Past. In an interview in the ’70s, he talked about how that process had made him reflect on how his own memory worked: “I think I really look back into a kind of fog most of the time, and things loom out of the fog.” And, of course, vagueness of memory is a blessing—if we could look back clearly, we’d die of regret. Pinter shows us that our forward-moving minds will eventually elide our failures of friendship, aspiration, kindness, loyalty, and love. The fog will take everything, Pinter the bleak optimist assures us, even the disappointing shows. Just give it time.