A doomstead of one’s own: a climate novel from Jenny Offill. 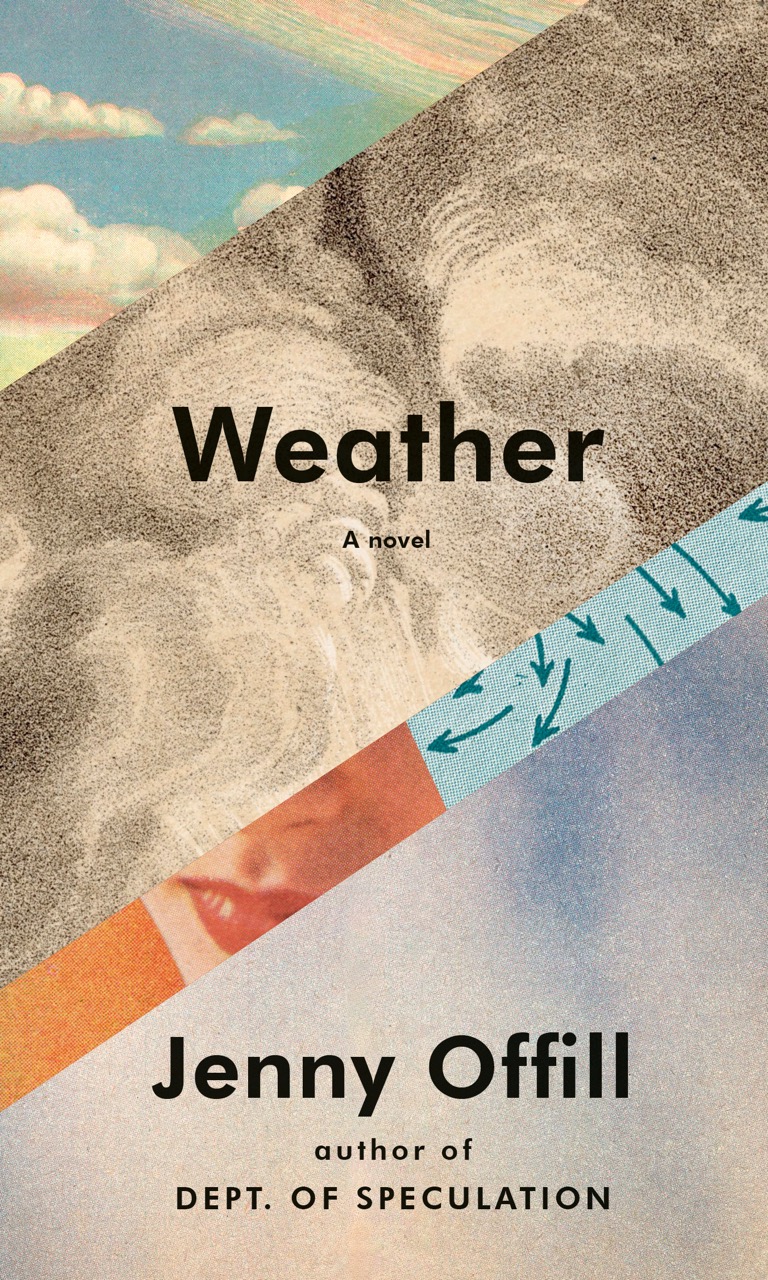 How does a medicated, anxious, unathletic, bookish type elude the threat of ecological apocalypse? This is the central puzzle of Jenny Offill’s much anticipated Weather, which entertains, with humor and urgency, an unpalatable answer: she doesn’t.

Offill’s third novel, Weather arrives on the heels of 2014’s acclaimed Dept. of Speculation. Reviewers marveled at the way that slim volume proceeds: speedily, in fragments, through the fractured domestic dramas of urban motherhood and a husband’s extramarital affair. The combination of apparent traditionalism (adultery plot) with the experimental, vignette form earned special praise, not to mention a mainstream audience; the New York Times named Speculation one of the ten best books of that year.

Historically, fiction by women with an interest in toxic romance, depression, and urban disaffection (not to mention fiction that explores these themes in diaristic vignettes) hasn’t always clinched popular approval. Hallmarks of 1970s American “women’s fiction,” like Renata Adler’s Speedboat and Elizabeth Hardwick’s Sleepless Nights, are often described as cult classics, their authors as writer’s writers. Speculation, a bestseller, was liberally compared to both. The clipped, autobiographical, female first-person has also been vulnerable to accusations of lacking social heft and imagination, of not being “fictional” enough. That a contemporary writer like Offill is celebrated for her acerbic anecdotes and seemingly autobiographical domesticity marks a decided shift in critical, or at least popular, tastes.

Though still firmly rooted in the drama of the nuclear family—who will test into NYC’s top middle schools? where are the brooms in the dollar store?—Weather expands the scope of concern. Domestic preoccupations are set in explicit contrast to, and in competition with, the onset of ecological disaster. “I’ve been thinking more about my doomstead,” our narrator, Lizzie, says. “Choosing people for it is tricky.” In the face of imminent catastrophe, choice is at once a great luxury and a violent act. Whom will a wife, a mother, save? Who, besides the uber-rich, decides who survives? In a fresh angle for climate literature, Offill has neatly framed the problem of prioritizing lives.

Lizzie is a grad-school dropout and “feral” university librarian (she lacks the proper degree) living in New York with her video game–designer husband, Ben, and their young son, Eli. Her brother Henry manifests as a kind of second child: a divorcé and drug addict teetering on the edge of relapse, he’s paranoid about accidentally harming his infant daughter. Lizzie’s own premonition for disaster is activated when she picks up a second job answering fan mail for the host of an apocalyptic podcast. She is thus thrust into the survivalist subculture: “I swear the hippie letters are a hundred times more boring than the end-timer ones,” she complains to her boss. Lizzie never shakes her suspicion of those evangelical end-timers, but the environmentalists soon manage to convert her. Before long, she’s up all night, googling survival tips like how to start a fire with a battery and a gum wrapper—trivia that Ben finds rather glum, or at least not much of a turn-on. “You’re weary of me, aren’t you?” she asks. Ben denies the charge, wearily.

The question of whom to save is particularly fraught for a woman like Lizzie. Despite her reflexive misanthropy, she can’t stop caring for the people around her, even complete strangers. She turns her attention to her brother, her newborn niece, her elderly mother, waives library fees, reluctantly joins a school committee because “believe me, I work less than these immigrant parents.” Her favorite mantra from meditation class is telling—“Sentient creatures are numberless. I vow to save them”—as is Ben’s warning when he overhears her repeating it in the shower: “Are you sure that’s the best chant for you?” At the mournful heart of this otherwise light-footed novel lies a recognition of the limits of care: you can’t save everything, love everyone. You have to choose, and soon.

The title is an allusion to climate change, but it also puns on the capricious structure of the book—the plot develops moodily, unpredictably, according to our narrator’s whims. Lizzie is a nervy radio tower tuned to erratic, anxiety-inducing wavelengths. She collects jokes, facts, ephemera loaded with moral implication: “Ben told me that in Greek culture it has historically been considered both a duty and an honor to take care of strangers,” she says. As in Rachel Cusk’s Outline trilogy, this deadpan reportage echoes the narrator’s latent inner turmoil, which in Lizzie’s case stands in for the ethical gridlock of the West.

Weather, though, has a more varied relationship to subjectivity. While Lizzie is capable, à la Hardwick or Cusk, of disguising derision as observation (“He looks at me and I can see him calculating all the large and small ways I am trying to prevent the future,” she says of a Silicon Valley suit), just as often her low opinions are made explicit: “blah, blah, blah . . .” concludes her summary of a conference on tech. Her condemnation oscillates between open and, more damningly, tacit contempt. Take this wonderfully subtle skewering of a tedious dinner guest: “She brings giant sunflowers and I try to find a vase to hold them . . . Later, she starts a conversation based on the idea that we’re living in unprecedented times.”

Lizzie’s more explicit jabs offer welcome comic relief, but they can on occasion feel too expected—the usual suspects have been rounded up. Nevertheless, Weather is an important reminder that “domestic” fiction is eminently suited to addressing social and ecological, as well as familial and personal, apocalypse. Offill has agilely coordinated many of the forces hastening destruction—indifference to relocation efforts, rejection of refugees, plutocracy—and counterbalanced them with a parent’s visceral, helpless anxiety for the next generation.

Whereas Speculation joined the genre of Smart Women Adrift, perhaps the more appropriate precedent for Weather is Marlen Haushofer’s 1963 novel The Wall. Documenting the rudimentary routines of the only surviving woman of a nuclear event, this Austrian classic is an undeniably domestic, quote-unquote feminine, eco-novel: trapped behind an invisible, nuclear-proofed wall, our nameless narrator cares for cows, cats, a dog; grows potatoes; forages and fishes; rations her matches, her paper, her sanity. The only thing she has to fear is the unlikely existence of another human survivor, capable of resetting the cycle of destruction.

For all the stats on rising oceans and melting poles, I remain convinced—and I think Weather shares this conviction—that despite the enormously frightening changes to our climate, the most immediate threat to human survival remains constant: the passive brutality of the individualistic West, manifested as indifference and neglect. As Lizzie herself concludes, “The core delusion is that I am here and you are there.”

Jessi Jezewska Stevens is the author of The Exhibition of Persephone Q. She lives in New York, where she writes and teaches.