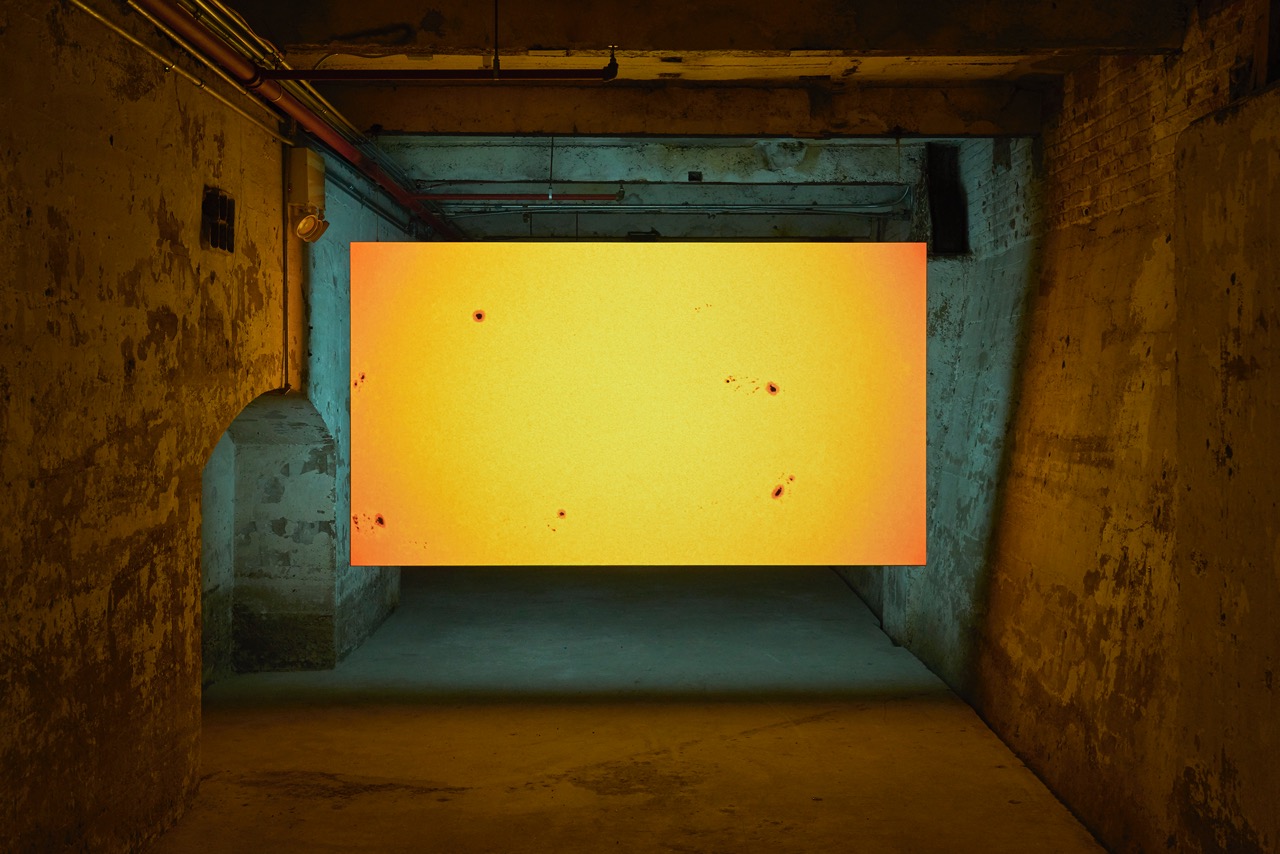 Of all the things art can make me feel, dread isn’t usually one of them. But I felt a sense of anxious foreboding when I saw 74 million million million tons at the SculptureCenter. I don’t say that as a criticism—the artworks in this deftly curated exhibition provoke an unusually strong emotional reaction, susurrating as they are with the disquiet of the strange, historical shifts our species is undergoing.

The title 74 million million million tons was conceived by the exhibition’s curators, artist Lawrence Abu Hamdan and Ruba Katrib, as sort of a joke to illustrate something that is technically quantifiable but in reality impossible to imagine. This is the conceit at the heart of the exhibition: How can we register those forces that act upon our lives but are too huge for us to grasp? (It’s sort of a query into the sublime for the Anthropocene era, I suppose.) Abu Hamdan and Katrib sought out artworks that produce “evidence” (their word) of things that are hard to see—marginalized subjects, the scope of environmental disaster, the gaping maw of a disastrous future. But maybe “symptom” is a better word than “evidence” here, with its cold and rigid connotations. Many of these works feel less like proof than like the manifestations of some underlying pathology; visiting the show feels like swimming in the affective residue of unfathomable global change. 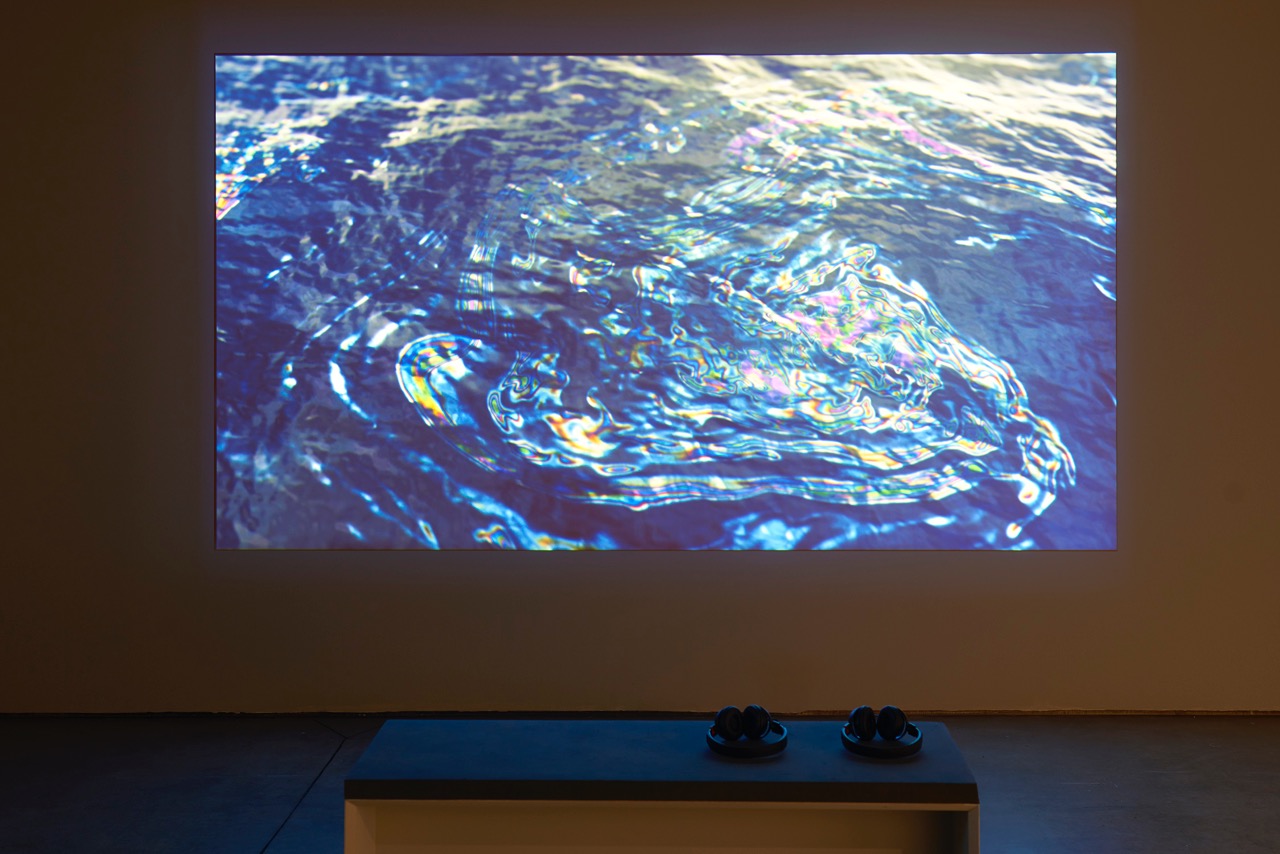 A group of ten, international artists are represented by twenty-six works, located on both the industrial ground floor and the cavernous basement. The formal and conceptual affinities of the assembled pieces are diffuse and wide-ranging; the exhibition as a whole defies tidy narration. You see a lot of organic forms juxtaposed with hard man-made edges, supernatural colors, “bad” images abutting sleek, ultraprocessed ones. Some projects are rooted in environmentalism—most notably Swiss artist and researcher Susan Schuppli’s mesmerizing installation about the 2010 Deepwater Horizon oil spill, a catastrophic event of epic proportions that she renders into horribly seductive images. Futurity is another conceptual trigger. American artist Sean Raspet, cofounder of the LA-based company Nonfood, presents an optimistic and yet unnerving vending machine of “nonbars,” white-wrappered energy bars made out of algae, a sustainable and eco-friendly food source that they propose as the food of the future. If that is the case, the future is not cheap (nonbars cost four dollars each). Nor is it delicious. 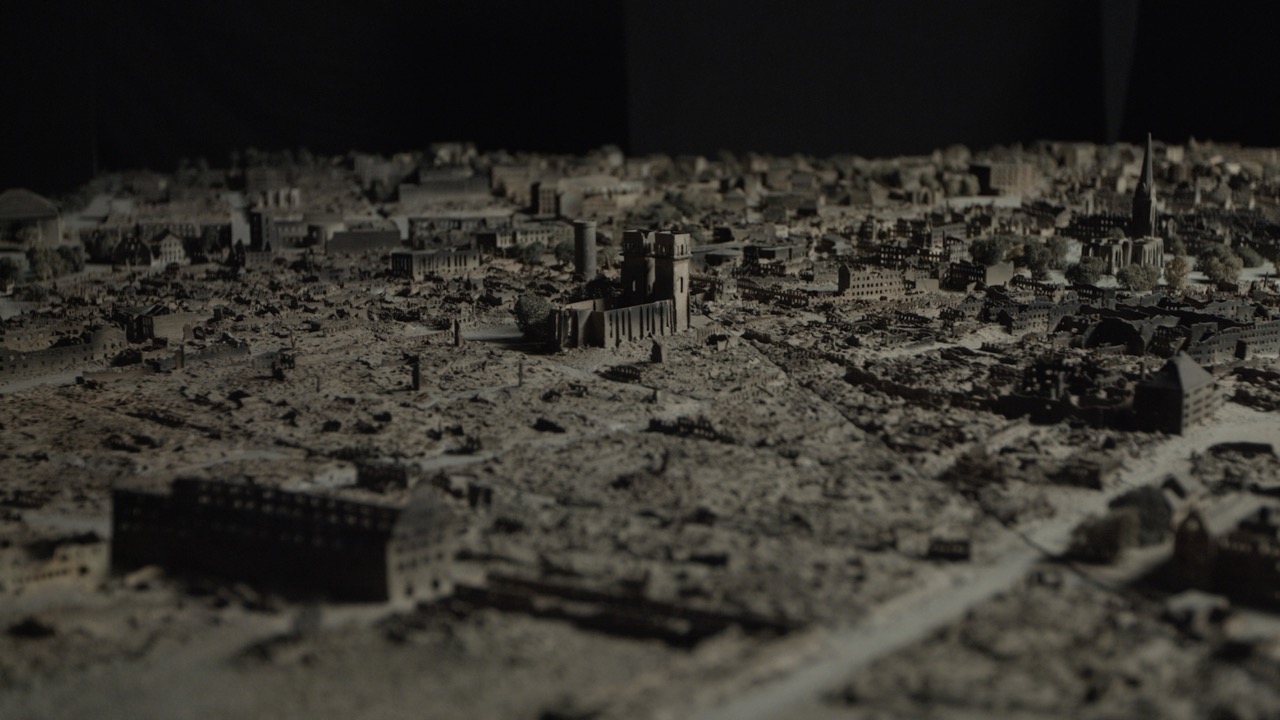 One of the most obvious and persistent through-lines is the control of human subjects by myriad invisible forces (technological, economic, legislative). In Kurdish-Iraqi artist Hiwa K’s video, A View from Above (2017; co-written with Abu Hamdan), the camera pans over and zooms into a vast and tinily detailed maquette of a destroyed city. In a voiceover, the artist himself (playing the role of an anonymous refugee who is helping a countryman lie his way into attaining asylum in Europe) narrates how foreign entities identify “safe” and “unsafe” zones in faraway countries to which the people in charge have never been. These unseen and unseeing administrative powers govern where people can and cannot go, whether in conflict zones or as they seek safety elsewhere. The video, inspired by real bureaucracies like the United Nations, renders visible the monumental, Kakfaesque absurdities that determine life or death, turning them into ludicrous fictions, ushering the viewer into a delusional world that leaves you feeling small and hollow. 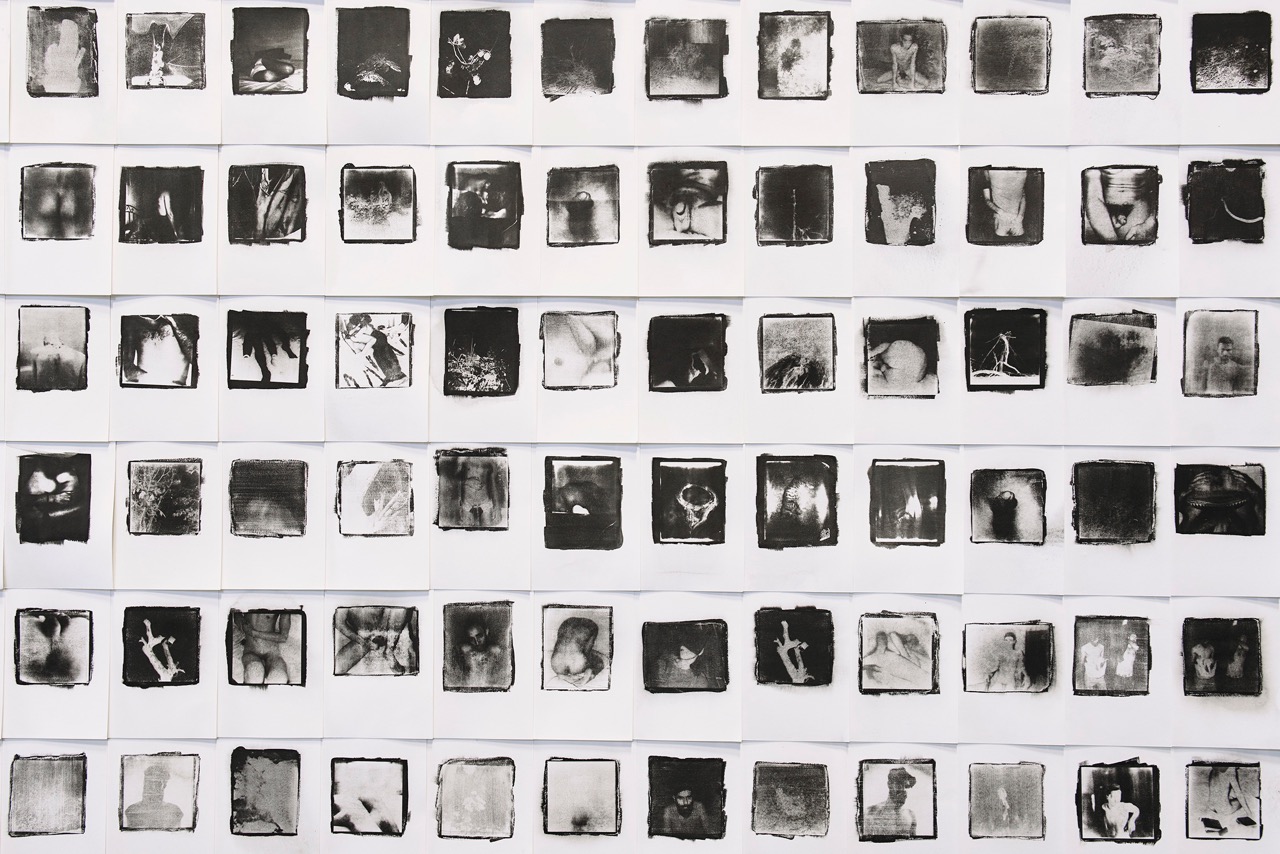 Elsewhere, two projects by Lebanese-American photographer George Awde suggest a subtler, more oblique picture of how quotidian movements are manipulated by intangible powers. Public Shadows (2017) is a grid of some 430 Polaroid-sized, slightly blurred, highly processed black-and-white photographs. They show fragmented figures: the nape of a neck, a bowed back, an ass being offered. Only occasionally does a model reveal his face (they are almost all young men), looking vacantly into the camera. Some of the subjects were Awde’s friends, some he connected with online in Cairo and Beirut (where homosexuality exists on the fringes of legality). As a study in the pursuit of pleasure and unequal power dynamics, he met with them in private spaces if the boys had access to apartments, in public spaces (often, sites for cruising) if they didn’t. Higher class status correlates to more privacy, hence, obviously, greater safety; but either way this was a dangerous project, for Awde and especially for his models. The abject photographs (dark and somewhat brutal portraits of vulnerability) serve as fugitive documentation of how desiring bodies circulate in places where they are endangered. 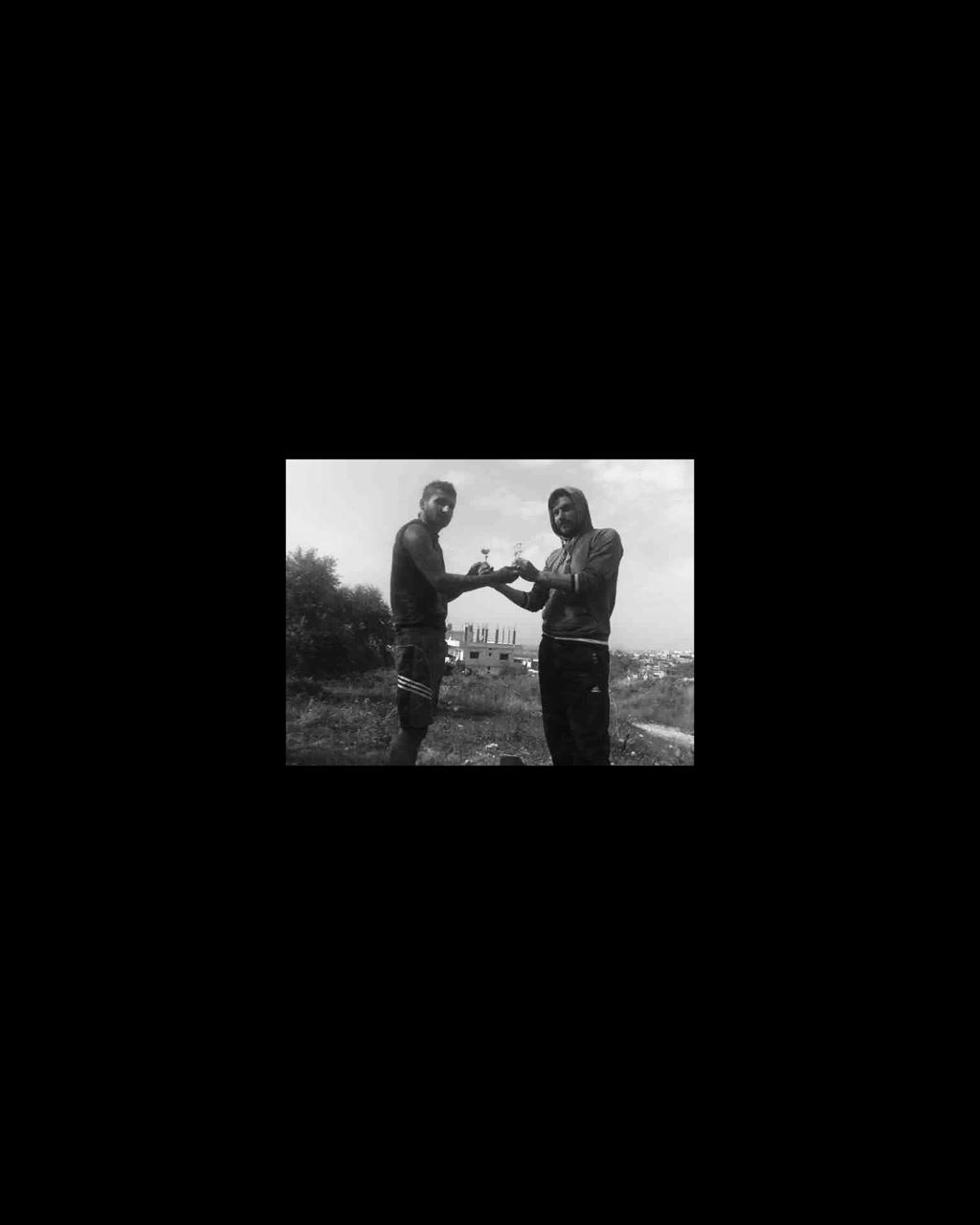 Downstairs, a suite of six untitled images (all 2016) reveal another way bodies get distributed—in this case, via war and economic pressure. The prints were made from photos Syrian men sent to Awde over WhatsApp after they returned home from Beirut. The vast influx of refugees into the Lebanese capital made it impossible for them to find work (whether sex work or more sanctioned forms of labor), so some made the reverse journey, dedicating themselves to fighting instead. Printed at the scale of a cell-phone photo and presented as high-art photographs (costly gelatin silver prints, luxurious black matting, and elegant wooden frames), the pictures are mostly peaceful: two men handing each other flowers, a row of youngsters leaning against a wall. But viewing them (so small, so hard to make out, the truth of them eclipsed in the same way life in Syria is eclipsed for those of us looking from the outside) is to be saturated in melancholy. 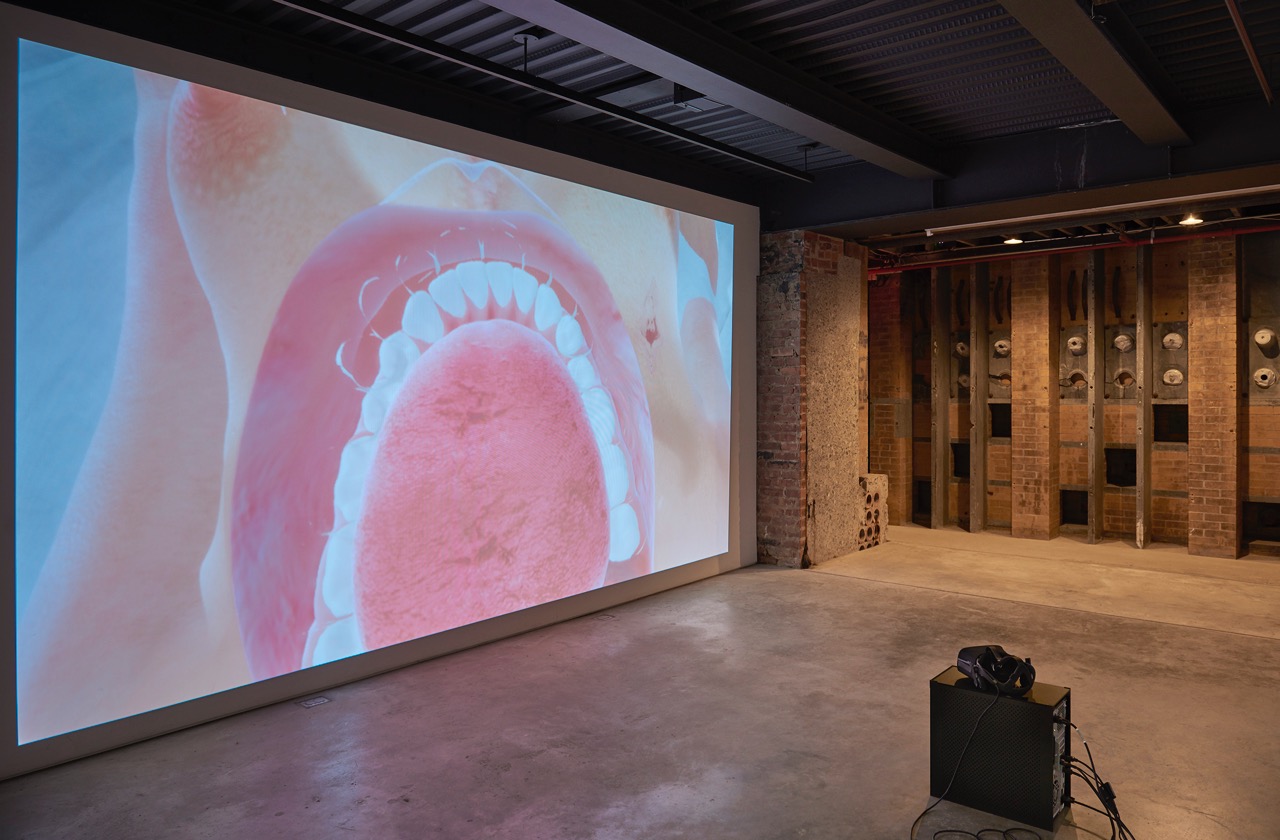 This is just one thread of many I could have plucked out of the exhibition—it’s a dense and complicated show. The sophisticated arguments being made by these works (mostly heavily research-based, drawing on all sorts of quantitative methodologies, and developing over long stretches of time and multiple iterations) are keenly engaging, and worth digging into. But one of the most powerful aspects of the exhibition is that you don’t necessarily need to do that digging in order to have a moving encounter—these are not artworks whose sole interest lies in accompanying didactic materials. I left 74 millions unsettled by that ineffable, invaluable surcharge that only art can give: an experience that shocks our relationship with reality, even as it offers no easy answers for how that reality can be reformed.