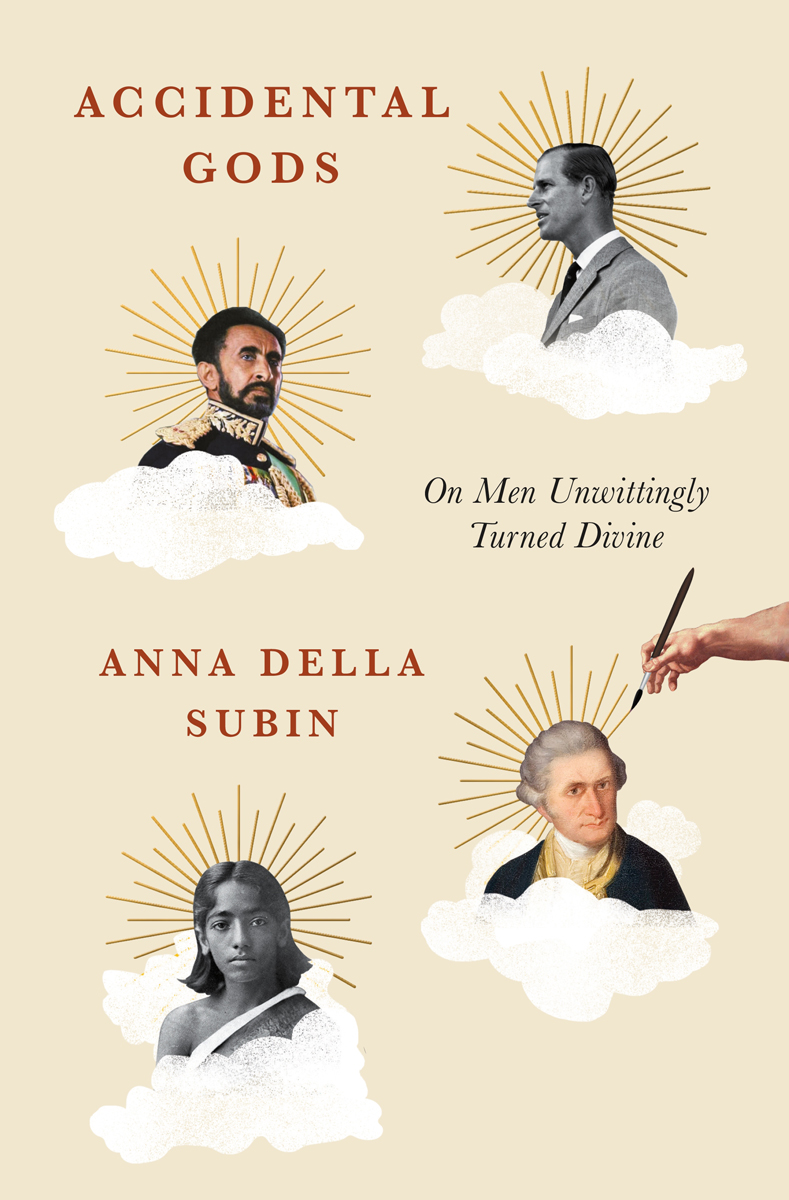 In English, there is a marginal difference between the words faith (which implies an ironclad certitude), belief (which may carry with it an unspecified degree of doubt), and knowing (an actual possession of knowledge). These words are often used interchangeably—a belief can be so strong it feels like a knowing, after all. But they can also exist together in a relationship of cognitive dissonance (I believe the meaning of the words I am typing is fixed and immutable, for instance, even while I conceptually know that language, a slippery and ever-changing thing, cannot be so). The lack of total conviction in the word belief makes it tricky to understand; the cultural particularities of how to hold a belief makes it vexing to apprehend. If we don’t necessarily know a belief, how do we experience it? Is it a feeling, a practice, an abstraction?

In her new (and first) book, Accidental Gods: On Men Unwittingly Turned Divine, a work so singular as to be nearly phosphorescent, Anna Della Subin sets out to query the nature of belief as she navigates her reader through an account of several historical episodes across a number of colonies-turned-nations, from 1492 to the present. In these episodes, a community, usually agitating in exigent circumstances, has spontaneously decided to believe that a particular man (always a man) is a god—a bestowing of divinity this chosen one angrily disavows, or only accepts begrudgingly for convenience. (Does God need to believe in His believers to exist?)

The book begins with a sudden flame of belief that simultaneously and independently flickered into the hearts of several different men living in Jamaica in the early 1930s: that the newly coronated king of Ethiopia, Haile Selassie I (born Ras Tafari Makonnen), was God, and that His arrival on earth signified that Black people would soon be liberated from white tyranny. Selassie himself, a devote Christian who did not identify as Black, actively resisted this veneration, which would coalesce into the increasingly powerful, multidenominational Rastafarian movement. But the more he would vehemently urge his believers to stop believing, the more they took his refusal as proof of his godliness.

The book goes on to survey Prince Philip’s sudden apotheosis at the command of denizens of the New Hebrides island of Tanna in 1974, after his boat passed by there—which he, unlike Selassie, somewhat bemusedly (and racistly) played along with up until his recent death. Also included in Subin’s litany is the fever of deifications of British colonial figures in eighteenth-century India by the very people they subjugated, and the British colonizers who would do some god-making of their own: Theosophist priestess Annie Besant and Theosophist pedophile Charles Webster Leadbeater, who anointed an Indian child as God incarnate. Besant, so it is told, is also the one who gave Gandhi the epithet “Mahatma,” much to his loathing, and we learn of his unhappy exaltation to godhood, too, and how believers in Gandhi-as-god were moved to an extremity of violence and destruction diametrically opposed to Gandhi-as-man’s own beliefs.

Subin, who studied the history of religion at Harvard Divinity School, is an essayist of particular style whose quiet genius on topics including laziness, procrastination, and sleep I have long found mesmerizing. Accidental Gods is her most ambitious and searching project yet, and it is also a writerly feat. While organized into thirteen chapters split into three parts (Christ’s lucky number), the narrative contained within this orderly structure cartwheels around time and space in a way that gives the impression of a rushing fever dream or a mystical vision. Yet Subin’s sentences are never blurry—they’re brisk, precise, and wondrously nimble, defying the staggering density of detail (historical, literary, weird, funny) that they carry.

That Subin is so attentive to how she crafts her language is in keeping with her advancing of the argument that this system of signs is, in fact, what belief is made from. (If you cannot say it, can you believe it?) Her text carefully traces how words, whether spoken, penned, or found in printed matter (as, for instance, in the case of the Rastafarians, whose foundational scripture is a National Geographic feature describing their god’s coronation), were used (and willfully misused) to rebroker reality. After all, in the beginning there was the word, and the entire course of modern history could be said to have begun in a word’s opportunistic mistranslation. When Spanish invaders starting with Columbus and leading through Cortés and Pizarro arrived in what is now South America, they all wrote with confidence that the Indigenous peoples there were addressing them as gods. This is clearly what they wanted to hear, as they could not understand the languages spoken; contemporary scholars now believe they were being addressed as something like “exceptional” (possibly in the sense of “strange”).

The Spaniards needed to cling to their self-bestowed divinity in order to justify their stealing and plundering of these new lands, which they explicitly knew was both morally indefensible, according to their religion, and legally forbidden, according to their rulers. And then there was the problem of the peoples whose worlds they were destroying, who they needed to keep subservient and quiescent in order to fulfill their greed. And thus “whiteness” was invented—a belief tinged from the beginning with doubt, a category created to justify its own existence with the knowledge that it was a lie. Prior to the 1500s, the Spanish word for race had been used primarily to differentiate animals by breed and humans by religion. Now, in the New World, the word race came to cleave a qualitative difference between people based on appearance, to create a hierarchy with whiteness reigning supreme.

Here the narrative starts to shimmer and shapeshift until the book takes on yet another, unexpected purpose, transforming from what at first might have seemed like an eccentric collection of historical footnotes into a bold retelling of the creation story of our current reality. In it, the modern world was born out of this linguistic creation of race and its hierarchy, and became real through its genocidal reification. This original sin begat politics as we know it, begat capitalism as we know it, begat the many forms of global strife that plague us as we know them, and even begat the climate change that is now ushering this modern world into its final chapter—the end of this world as we know it.

Subin cites various anthropologists and pop-culture sources who mock the beliefs of the peoples in her book, and uphold them as proof of their inferiority; how could they really believe Prince Philip (etc.) was God? But she shows how these people, all of whom had lost the worlds of their ancestors and been forced into deadly oppression in this new one, were using the limited resources at their disposal—storytelling, myth, mass media, newly arrived technologies and commodities—to scramble the codes and symbols of the dominant reality and believe a new one into existence. As Subin writes of Prince Philip, “nobody knows for certain that He won’t save us. And no one has yet found a better way to save us.” Hers is, ultimately, an optimistic message: if our genocidal world was created out of a half-believed linguistic maneuver, surely we can muster the will to disbelieve it, so we may write something better.