The veteran ensemble releases Swirling, its first album since the ’90s. 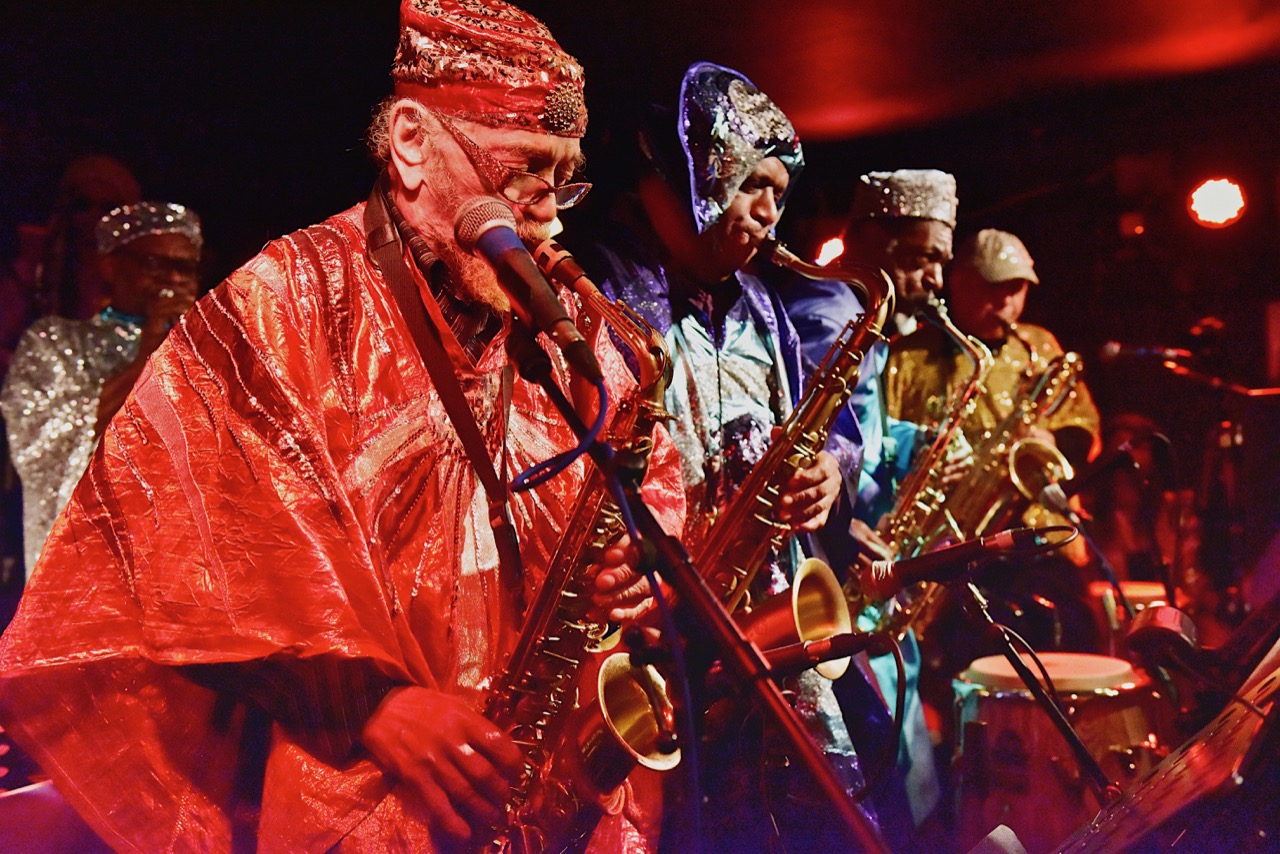 Sun Ra’s towering, sagacious and loquacious persona always cast a long shadow over his gifts as a composer and melodist à la Frank Zappa and George Clinton. An interviewer once asked former Ra acolyte Jack DeJohnette if Ra’s music was “specific,” but anybody who saw the Arkestra multiple times in the ’70s and ’80s, as this writer did, knows Ra not only had tight arrangements but memorable lyric-laden hooks. You left the club or concert hall singing and swinging hella Ra ditties long after the ensemble had departed the stage, and hoped to hear them again on Ra and the Cosmic-Myth Science Arkestra’s next appearance in your town (which could be anywhere from Detroit to Cairo to Oakland to Berlin).

Marshall Allen joined the Arkestra in 1958, at the tender age of thirty-three, never left, and in 1993, when “Sonny,” as the group affectionately called Ra, took it to the next phase joining the stars and ancestors. 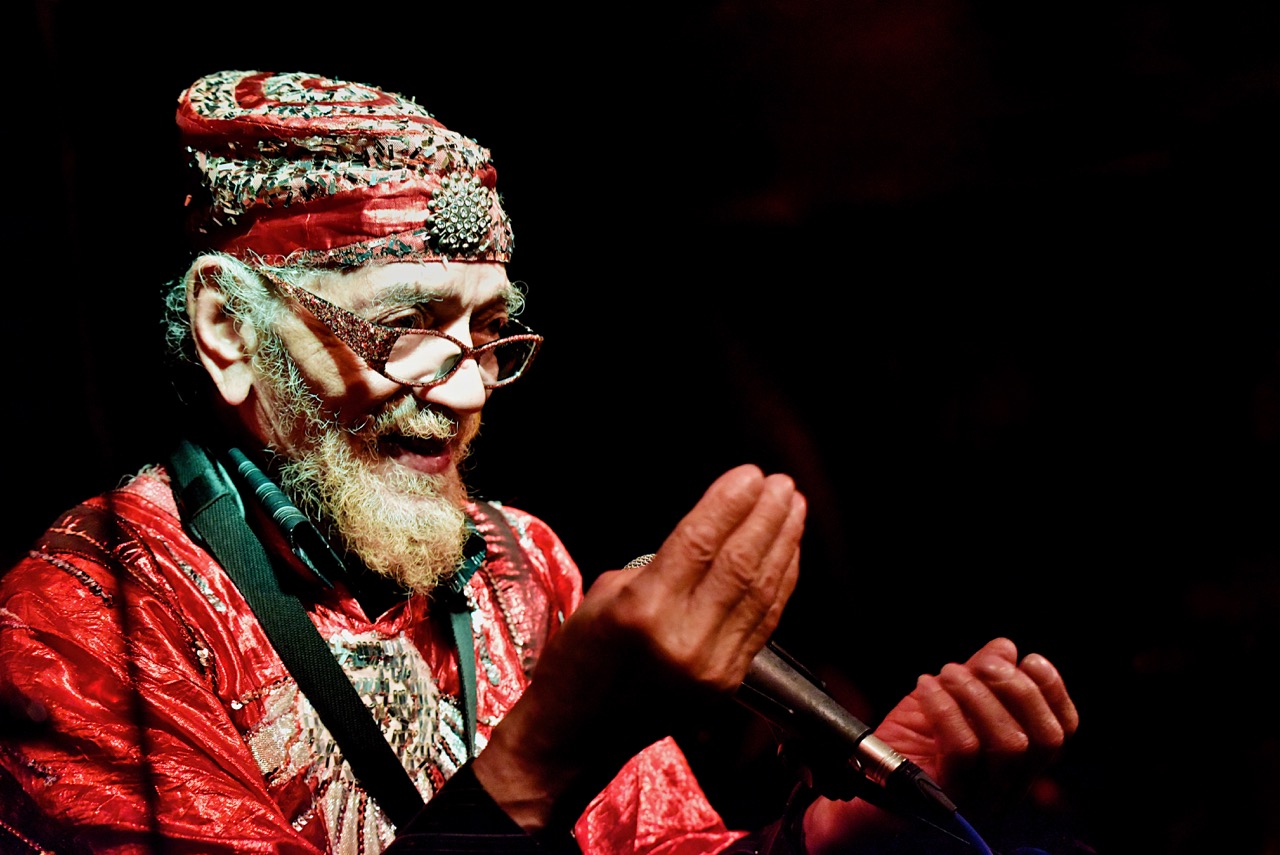 Allen assumed leadership at the less tender and more bodacious age of sixty-nine. In his more than capable hands, the Arkestra has maintained an international touring presence for the past quarter century. During Ra’s time with us earthlings he released one hundred full-length albums. This tallied up to at least a thousand original compositions by the man some, per his bidding, called “Mr. Ra’’ and some called “Mister Mystery.’’ The Arkestra’s recorded output since the ’90s has been nada until right about a time called now. 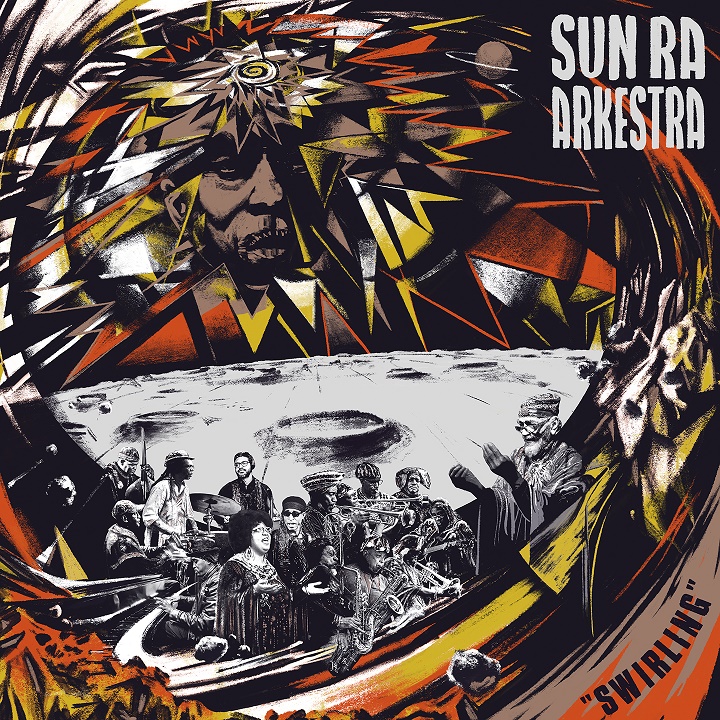 The Strut label’s release of Swirling lets the world know how adept and lively the current Allen-conducted Arkestra are at sustaining and extending Ra’s musical scope and vision into the twenty-first century. Longtime devotees will emit chortles of recognition upon seeing several fan-favorite chestnuts dotting the album’s repertory selections: “Rocket No. 9,” “The Satellites Are Spinning,” “Sky Is a Sea of Darkness,” “Astro Black,” “I’ll Wait for You.” Allen composed the title track, which harkens back to the Arkestra’s Chicago lounge days with an effervescent yet dissonance-dusted ballroom dance melodicism—horns orchestrated just pitchy enough to disturb the easy-listener’s peace of mind, as Ra sometimes demanded. Pianist Farid Barron here displays the kind of daring pungent facility on the 88s that elicits delightful memories of Ra’s well-trained and well-distempered virtuosity on acoustic keyboard. Vocalist and violinist Tara Middleton reprises the role of June Tyson, original singer (and spectacular Arkestra costume designer), with warmth, aplomb, and hypnotic lyricism. 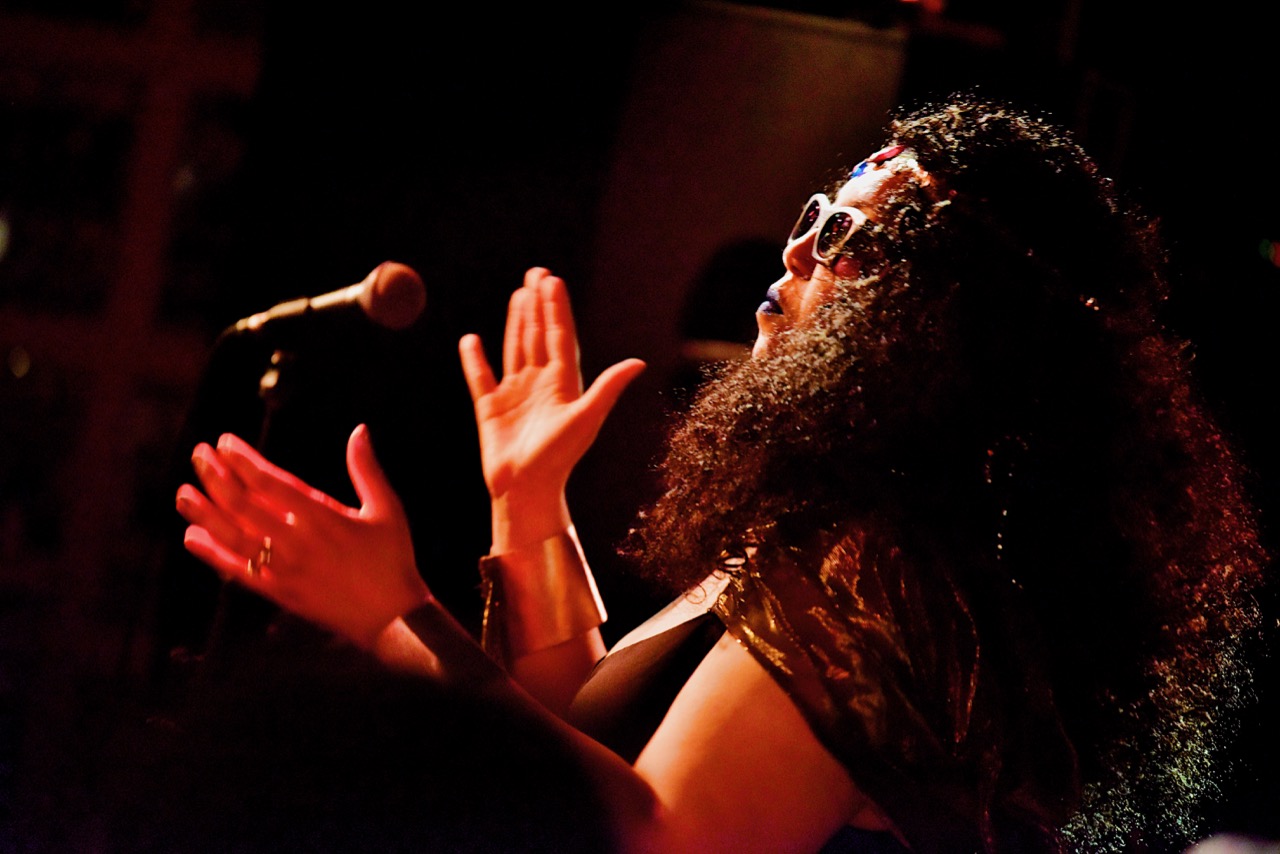 In place of Ra’s phantasmagorical synthesizer stabs, squeals, squalls, and glissandos, Allen swoops in randomly across the tracks with his spooky and pixelated electronic EVI horn. Allen and Middleton’s duet  on “Astro Black” points up how much the very much in vogue idea of Afrofuturism owes to Ra’s rallying, recombinant fusion of cosmic darkness and African Blacknuss, “ancient and to the future” in the parlance of Ra disciples the Art Ensemble of Chicago. The impact of Ra’s other-and-outer-worldly presence on the ’60s music scene can be readily heard in the trans-dimensional-tilting work of John Coltrane, Albert Ayler, Amiri Baraka, Jimi Hendrix, Zappa, Pink Floyd, Soft Machine and King Crimson, Parliament-Funkadelic; more contemporary conceptually Ra-spawned avatars would include Living Colour, Underground Resistance, Drexciya, Flying Lotus, Thundercat, Janelle Monáe, Kamasi Washington, and Shabaka Hutchings’s various radical units: Sons of Kemet, the Comet Is Coming, and Shabaka and the Ancestors.

The omnidirectional pursuit of musical, philosophical, and poetic inspirations from historical, mythical, and futuristic sources is a Ra staple, and there are fully attentive and conscientious reminders of that on Swirling. The release also doesn’t give short shrift to the comedic bent of Ra’s enterprise, reprising the 1966 appearance of the Arkestra on a Batman compilation produced by the legendary African American record producer Tom Wilson—a Ra colleague whose own extraordinary series of career firsts include the signing of Sun Ra and Cecil Taylor for debut recordings, discovering the Mothers of Invention and the Velvet Underground, forging the remix on “Sounds of Silence” that saved Simon and Garfunkel, and getting Dylan to go electric when producing his top-ten single “Like a Rolling Stone.”

BMI credits “Queer Notions” to composer Thomas Newman because his film soundtrack for Road to Perdition contains the track. But it was actually written by Coleman Hawkins and first recorded by the big band of Ra’s former boss and mentor Fletcher Henderson, whose younger brother, Horace Henderson, arranged the original version, per Columbia Record’s fastidious session notes. 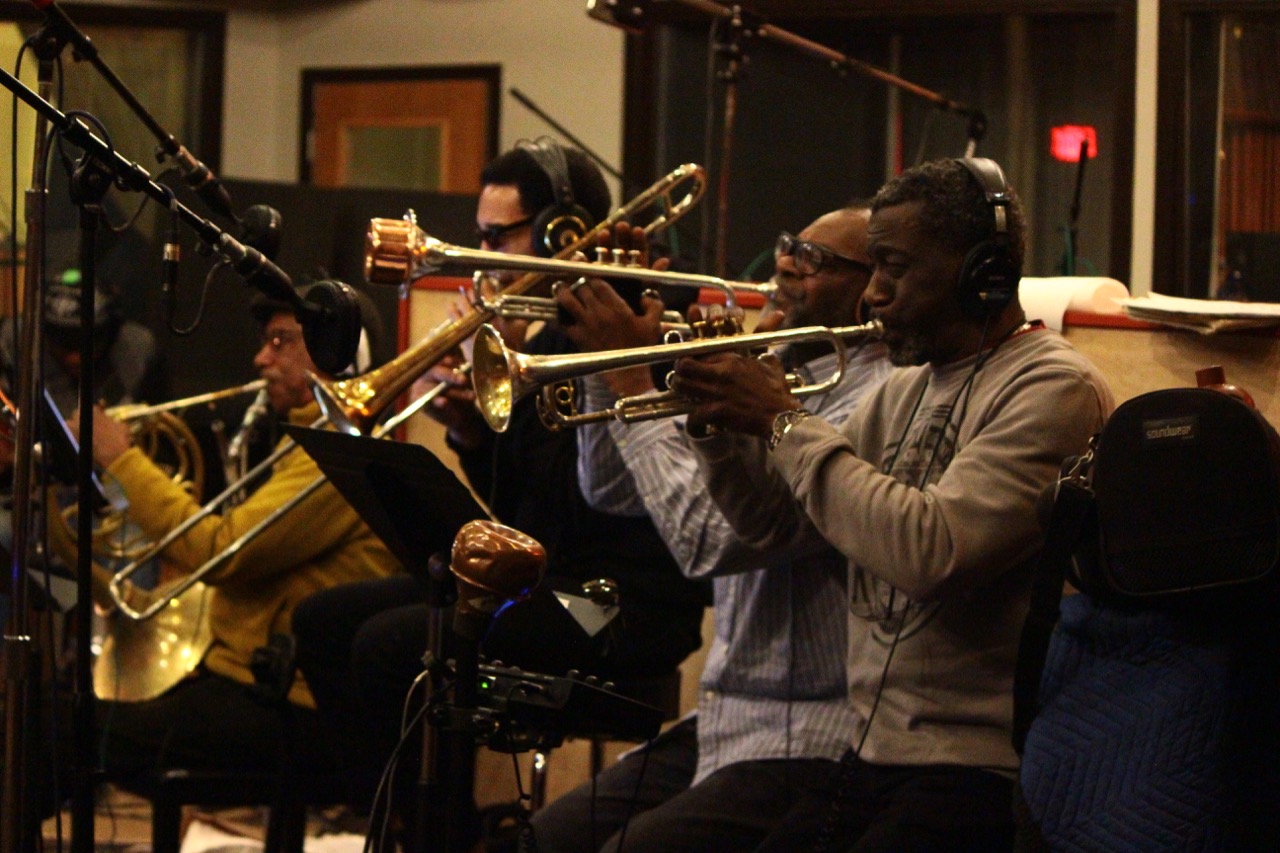 Swirling also gives ample dap to other decades-deep mainstays of the Arkestra, such as the late, much-lamented baritone saxophonist Danny Ray Thompson, who passed away in March; trumpeter Michael Ray; and French horn specialist Vincent Chancey. All deliver seasoned-veteran resplendence and first-hand received wisdom to the proceedings. The swayback stripper-beat blues stroll of “Space Loneliness” and the moon-waltz exuberance of the album’s closer, “Door of the Cosmos / Say,” provide soaring examples of everyone’s skills at extemporaneous flight, notably guitarist Dave Hotep’s superstring inventions on the latter, and James Stewart’s supple tenor on the former. Allen’s EVI steadily ups the ante of requisite weirdness throughout the denouement as well. 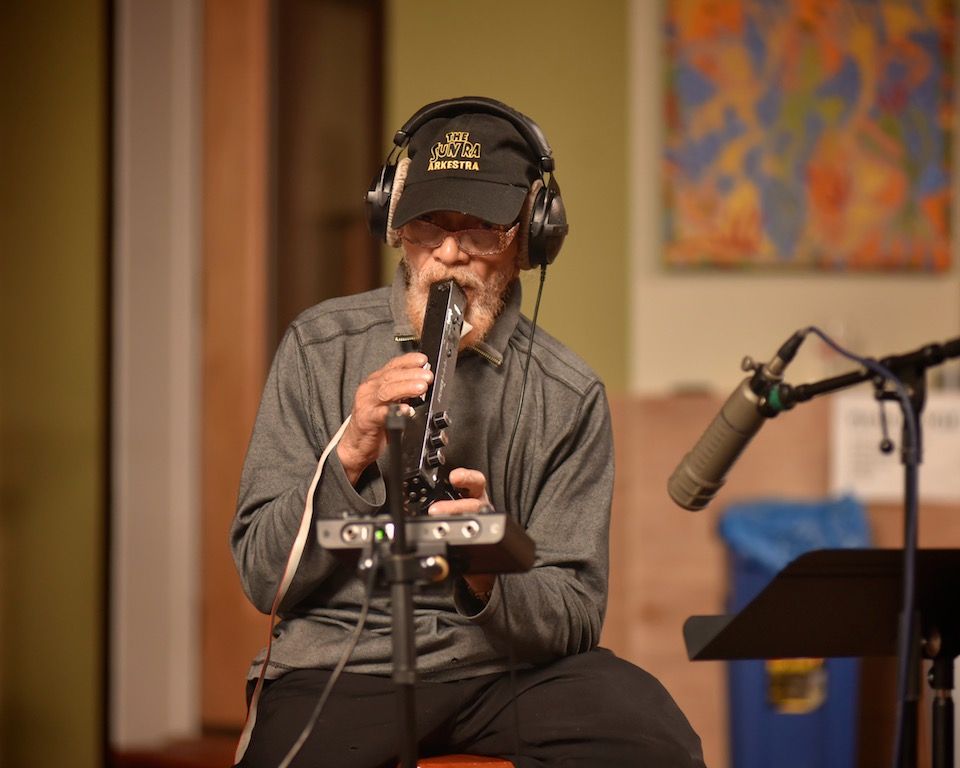 Anyone who’s been in a band that lasted more than three weeks or even as long as three years knows how remarkable it is for Ra to have inspired the loyalty that’s kept multi generations of players enamored of his revolutionary musical ideas for over six decades. Viva Le Sun Arkestra under the direction of Marshall Allen. Pictures of Infinity indeed.

Greg Tate is a writer and musician who lives in Harlem and is a proud member of Howard University’s Bison Nation. His books include Flyboy in the Buttermilk, Midnight Lightning: Jimi Hendrix and the Black Experience, Everything but the Burden: What White People Are Taking from Black Culture, and Flyboy 2: The Greg Tate Reader. Since 1999 Tate has also co-led the Conducted Improvisation ensemble Burnt Sugar the Arkestra Chamber. The group tours internationally, and have released sixteen albums on their own AvantGroidd imprint.