Race is the missed note in this jazz-driven Hollywood musical. 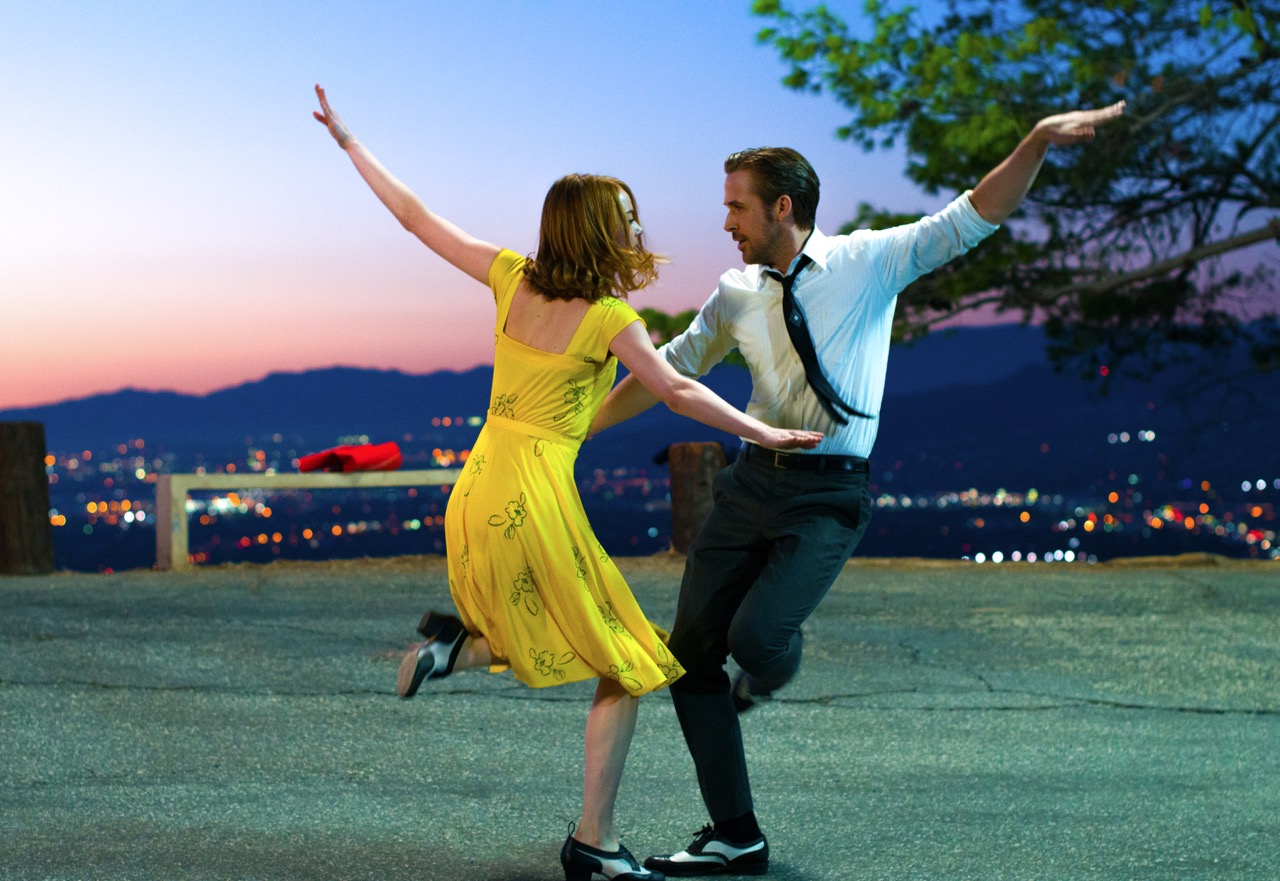 Damien Chazelle’s La La Land is to the American musical film what Martin Scorsese’s Mean Streets (1973) was to the small-time gangster movie. Like Scorsese, Chazelle inhabits, with joy and an absence of self-consciousness, the historical language of his chosen Hollywood genre and brings it into the present moment with an assist from master samplers of the old-time but still vital French New Wave. Allusions abound: buoyant, black-and-white Fred and Ginger hoofer flicks; Vincente Minnelli’s Technicolor Cinemascope dazzlers; Scorsese and Francis Ford Coppola’s ungainly revamps; and thrilling French re-imaginings by Jean-Luc Godard, Jacques Demy, and Chantal Akerman. Flawed though it is, La La Land deserves a place in this largely glorious company. And no, you don’t need to have seen any of these reference points to find it pleasurable and often exquisite entertainment.

Chazelle’s three features are all jazz-inflected musicals. Guy and Madeline on a Park Bench (2009), completed while the filmmaker was at Harvard, concerns an interrupted romance between a Boston music school’s star trumpet player and a young woman who hasn’t yet decided what she wants to become. He’s African-American, she’s probably Caucasian, but in the movie’s (perhaps) idealized multicultural milieu, racial difference barely registers. Shot with a handheld 16 mm camera (Chazelle was his own cinematographer and editor), Guy and Madeline melds cityscape cinema verité; the kind of musical, whether mass culture or art film, in which ordinary characters burst out in song and dance at the drop of a top hat; and movies specifically set in a music context—for example, a Chazelle favorite, Dudley Murphy’s Black and Tan (1929), which showcased Duke Ellington and his orchestra. Made for pennies, Guy and Madeline is an elegantly detailed sketch for La La Land.

With this unlikely Hollywood calling card, Chazelle moved to Los Angeles, where he believed he would have the best chance of making his long-cherished project: a contemporary, Minnelli-like musical, shot on color film in Cinemascope, with movie stars playing young lovers with big ambitions—the kind of romance that could open wide in multiplexes all over the world. Which is exactly what La La Land is. But to prove he had the chops to pull off such a complicated and daring picture, Chazelle wrote and directed Whiplash (2014), which drew on his personal history as the drummer in an award-winning high school band. Set in a Juilliard-like music college, the film tenaciously focuses on the conflict between a bullying teacher and the talented student he terrorizes. Its kinesthetic evocation of performance anxiety, which you don’t need to be a musician to feel in your solar plexus, galvanized viewers. Most of its fans, though—including me—failed to notice a small but significant fallacy in the plot. It seems implausible that African-American jazz students at New York’s foremost music college would passively sit around while their big-band studio class is hijacked by a white teacher (no matter how great his reputation) getting his rocks off humiliating a white student, whose talent has yet to be discerned.

A similar shortcoming mars Chazelle’s latest endeavor. It matters when and where a movie lands. La La Land has struck gold at the box office and on the awards circuit at a moment when the racism that is American democracy’s most egregious failure is out in the open and as virulent as it was from the beginning of the 1950s civil rights movement to the murder of Martin Luther King Jr.

Five years from now, if we get through this current disaster and if I’m still a cinephile, I might view La La Land as the emotionally poignant, impressively crafted movie that it is, and leave it at that. I might be able to accept that Chazelle gave the racial inclusiveness of his first film short shrift in order to fulfill the tradition of Hollywood musicals and the practical demands of his producers by casting two white bankable stars, Ryan Gosling and Emma Stone, as his romantic couple.

Gosling plays Sebastian, a jazz piano player, who venerates Thelonious Monk among others and wants to open an LA pure-jazz club. In actuality, there are brilliant white jazz musicians who’ve played with black musicians for their entire lives. Had Chazelle not changed his medium from music to movies, he might have been one of them. But there is something patronizing in Seb’s desire to single-handedly save the Los Angeles jazz scene. Chazelle and Gosling created a character who is a bottled-up control freak, for whom music is obsession and salvation. The film fails to explore, however, the power dynamics between this self-involved white guy and his African-American musical colleagues. Instead, it focuses almost entirely on the love story between Sebastian and Mia (Stone), an aspiring actress, who adores 1940s movie goddesses and is humiliated on an almost daily basis when she is rejected in auditions for thankless roles she doesn’t really want to play. Sorry to keep harping, but there is only one major speaking role for an African-American in La La Land, that of an electric jazz/pop fusion big-band leader (John Legend), who, by convincing Sebastian to trade his devotion to classical jazz for the immediate gratification of money and fame, becomes the film’s only heavy. 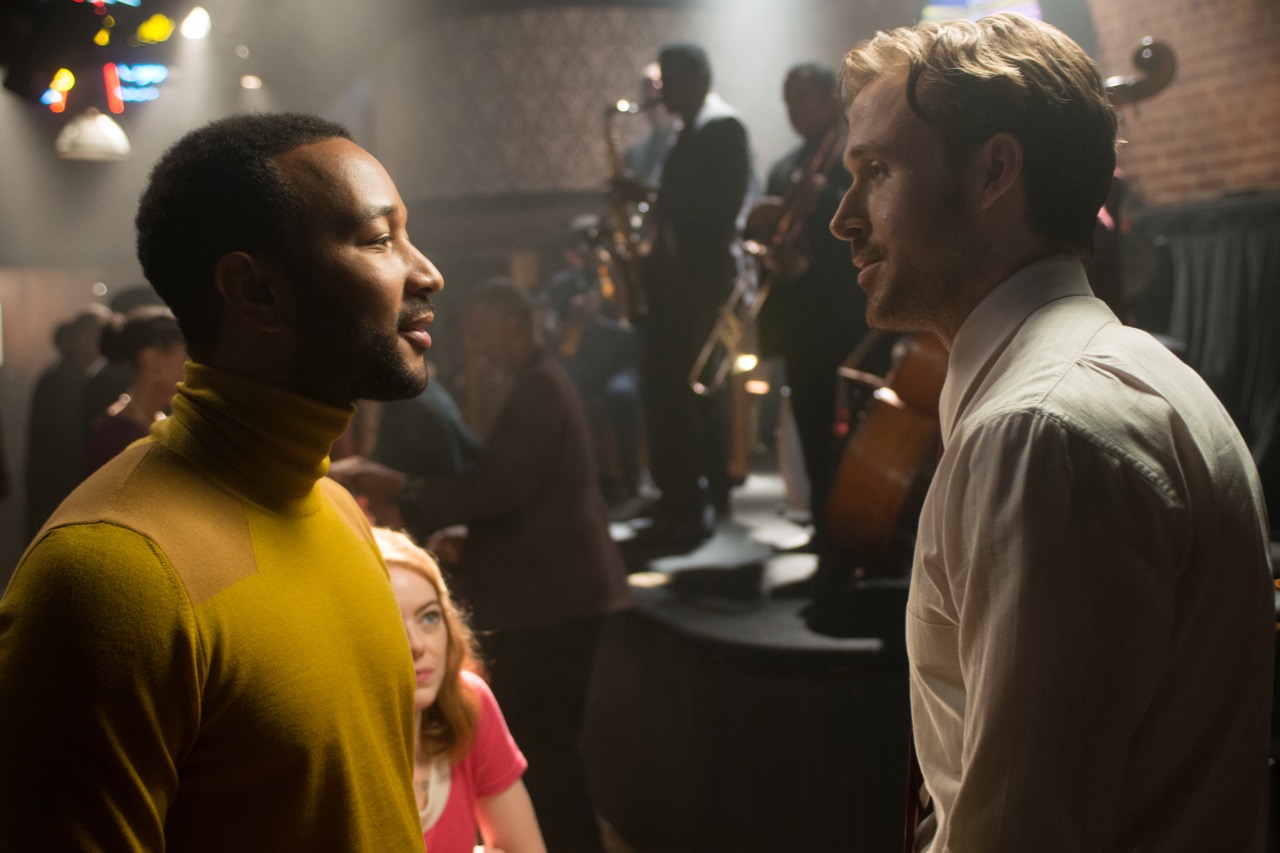 But enough. Seb and Mia meet, more hostile than cute, in a freeway traffic jam, keep running into each other, and fall in love. They support each other’s aspirations until their careers carry them in different directions. “Here’s to the mess we made” sings a teary Mia in the audition that lands her a break-out role in some kind of improvised movie that takes her to France, cementing the couple’s split. Chazelle, who delights in punctuating endings, big and small, with surprise twists—I’ll always remember the perfectly timed slide and strike that Seb executes as he walks away from Mia after their first big dance routine in Griffith Park—doubles down on the fantasy that is La La Land in its entirety with an epilogue in which Seb and Mia, both ensconced in their separate adult lives, meet again by chance.  As Seb, seated at his club’s piano, reprises the most haunting tune in Justin Hurwitz’s score, we see a just-the-highlights version of the life that Seb and Mia—had he been a more supportive boyfriend and she less career driven—might have had together, a ravishing vision in which the range of emotion and movie magic that Chazelle achieves through  gravity-defying camera movement, eye-popping color—red, yellow, and myriad shades of blue—and rhythmically precise but unpredictable editing is distilled and heightened in eight minutes of suspended time. Impossible love stories live forever in the movies. 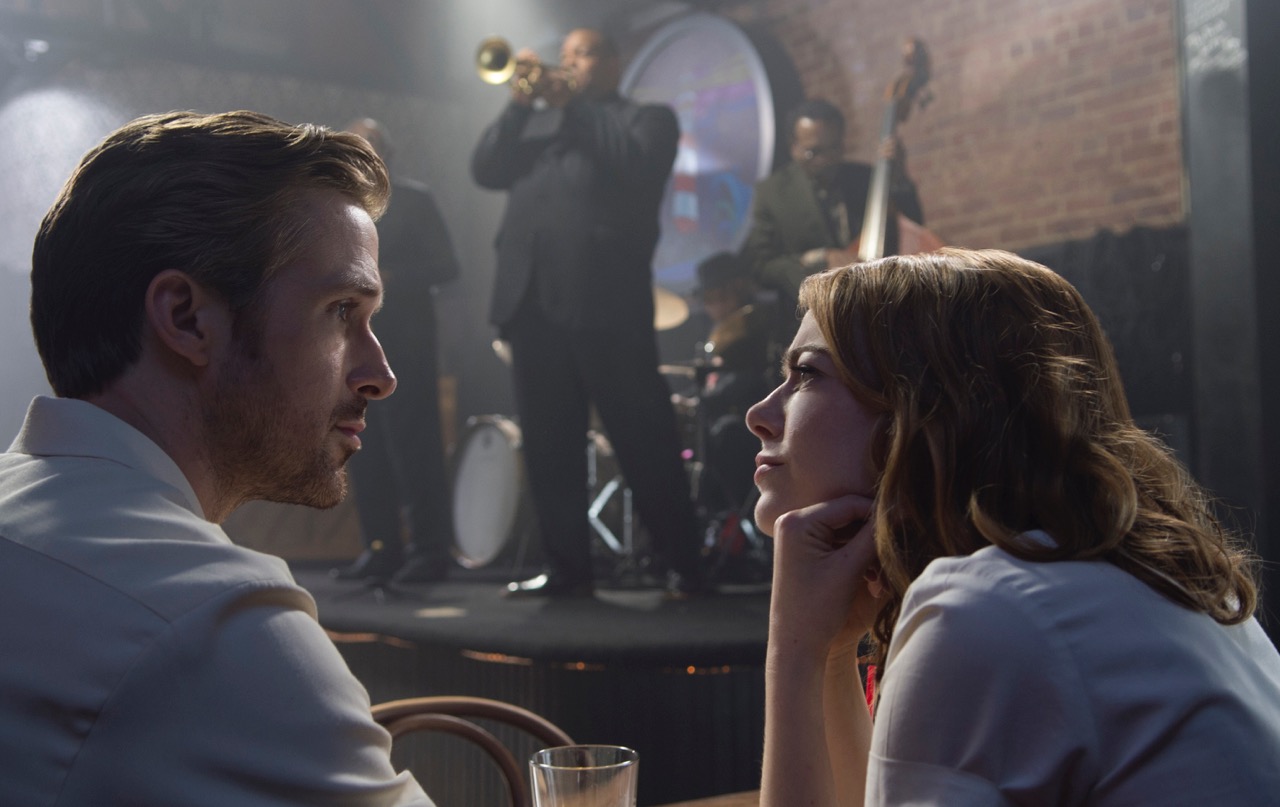 Amy Taubin is a contributing editor for Artforum, Film Comment, and Sight and Sound magazines. She is the author of Taxi Driver in the British Film Institute’s Film Classics series and co-author of the monograph James Nares (Rizzoli, 2014). She has been a member of the selection committee for the New York Film Festival since 2012. She teaches at the School of Visual Arts, NYC.