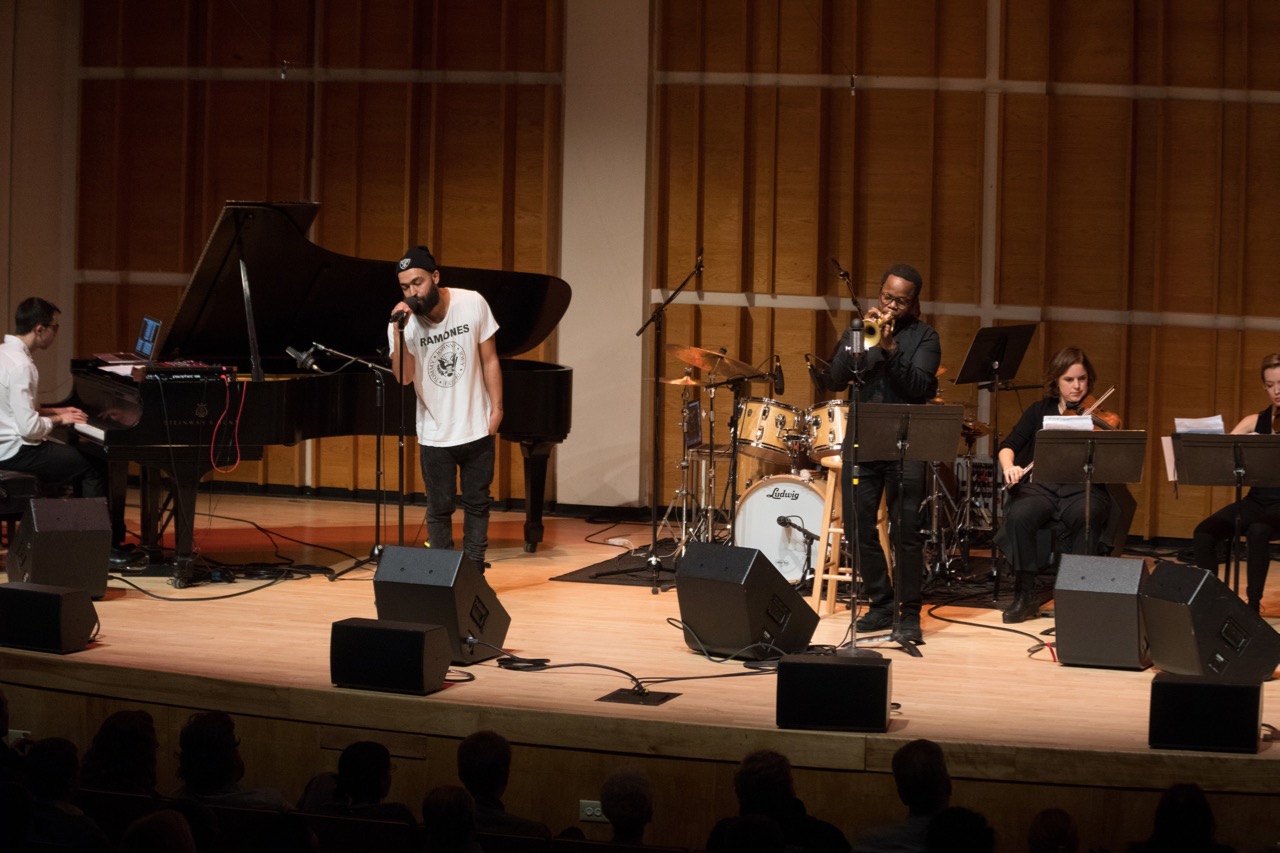 The Ecstatic Music Festival follows an important, if familiar modern trend in the world of American composition. Its promotional text promises shows that bring together “composers and performers from different musical genres or scenes,” in order to foster “adventurous” programming. Detonating the divisions between genres has worked for onetime upstart labels now well established, like Nonesuch. And a similar spirt has also long animated the Brooklyn Academy of Music’s Next Wave Festival. Though just because a form of marketing has become familiar doesn’t mean that everyone executes at the same level.

Happily, since its 2011 founding, the Ecstatic Music Festival has put itself in the realm of its most storied forebears. Its curator, the composer Judd Greenstein, has demonstrated a keenness of taste that does justice to his mission statement. But good taste alone can’t ensure valuable collaborations across genre divides. On February 18, I went to the festival’s latest offering with high hopes—but a sense of uncertainty, as well. The evening matched up three divergent acts—each accomplished in distinct ways, and a bit difficult to envision gelling together.

The rapper Kool A.D., formerly of the group Das Racist, has a strange talent for moving between chill, stoner bonhomie and brash political critique in the same freestyle verse. Jazz trumpeter Ambrose Akinmusire has released two contemplative albums on Blue Note; though even when fiery, the trumpeter’s music trends toward the solemn, rather than the outlandish. The contemporary classical group the Mivos Quartet has played works by visionaries like Tony Conrad and Kate Soper, though it doesn’t have a significant background in rap.

But it was these same differences in emotional and performance styles that allowed for striking contrasts at the Upper West Side’s Merkin Concert Hall. Over the course of “Oragami Harvest”—an hour-plus suite composed by Akinmusire for these musicians—the players created a steady feel of communication, and a wild sense of surprise. (The piece was co-commissioned by the Ecstatic Music Festival and the St. Paul Chamber Orchestra’s Liquid Music series.) Each act pulled this off by staying true to themselves, while bending ever so slightly in the direction of the other collaborators. The string musicians in the Mivos Quartet are used to navigating the hard-charging pulses of post-minimalism. But I’ve never heard them working with as much funk as was required by Akinmusire’s in-demand drummer, Marcus Gilmore. 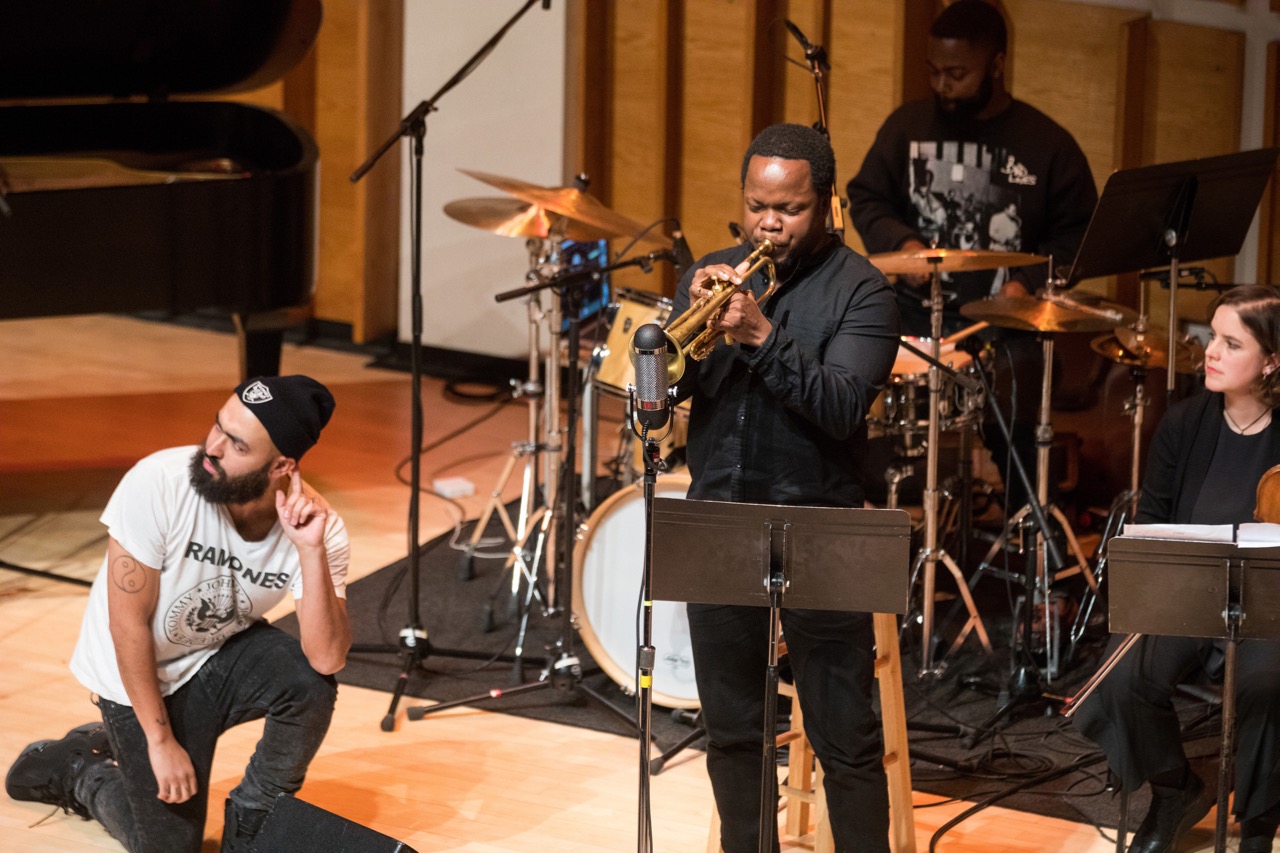 Kool A.D. played the character familiar from his records—and occasionally mugged for the audience. (He even vogued some b-boy stances during one Akinmusire solo.) But the “slacker rap” reputation he’s been tagged with was seldom in evidence. Even when quoting his old verses, there was an element of risk involved for the emcee—since keeping up with Akinmusire and Gilmore’s roiling rhythms is different than riding the stolid beats the rapper typically favors.

During the set, I picked up on the appearance of rhymes from two older cuts in Kool A.D.’s catalog: his guest verse from Mr. Muthafuckin eXquire’s delirious, exactingly unhinged “The Last Huzzah (Remix),” and the introduction from A.D.’s own, more brooding song “TV Eye.”

In each case, he made those rhymes work in the context of Akinmusire’s quick-changing arrangements: the rapper was able to swing from slow tempos into faster ones. He was attentive to the need for crisper diction when rhyming atop all the instruments on stage—but then employed greater drawl when working alongside only electric keyboard and drums. A.D. did this without sacrificing his easygoing persona. The improvisatory nature of the rapper’s flow—which can, at times, sound casual to the point of disposability during one of his 100-song mixtapes—took on a new tenor when placed in proximity to jazz riffing. Generally, he felt more consistently in the moment here.

Akinmusire pushed A.D., but the rapper prodded the trumpeter too. Akinmusire can sometimes seem bored with the pyrotechnics that come easily to him on his instrument—instead preferring long sections of development before throttling into his high-intensity mode. But Kool A.D. has more experience as a ringleader (or at least as a co-bandleader) than he does as a sideman. At one point, tiring from an extended freestyle, he appealed directly to his seated collaborator: “Ambrose . . . can you play, like, some trumpet or something? I’m gonna take a little break from rhyming.” The crowd laughed, as intended, and Akinmusire quickly obliged. In doing so, he leapt directly into the same dynamic zone that had exhausted Kool A.D. It made for some of the trumpeter’s most gripping playing all evening.

Not every move worked this well. Akinmusire clearly relishes writing for a string quartet, but some of his go-to moves—like slow, largely tonal progressions that gradually take on notes of chromatic tartness—felt a touch overused. On occasion, his writing for the Mivos players seemed cordoned off in isolation from the music fashioned by the jazz trio, which included the sterling pianist Sam Harris. (I hadn’t heard Harris before. But his ability to work across a drum machine, a grand piano, and a synthesizer—often simultaneously—makes me want to hear him some more.) 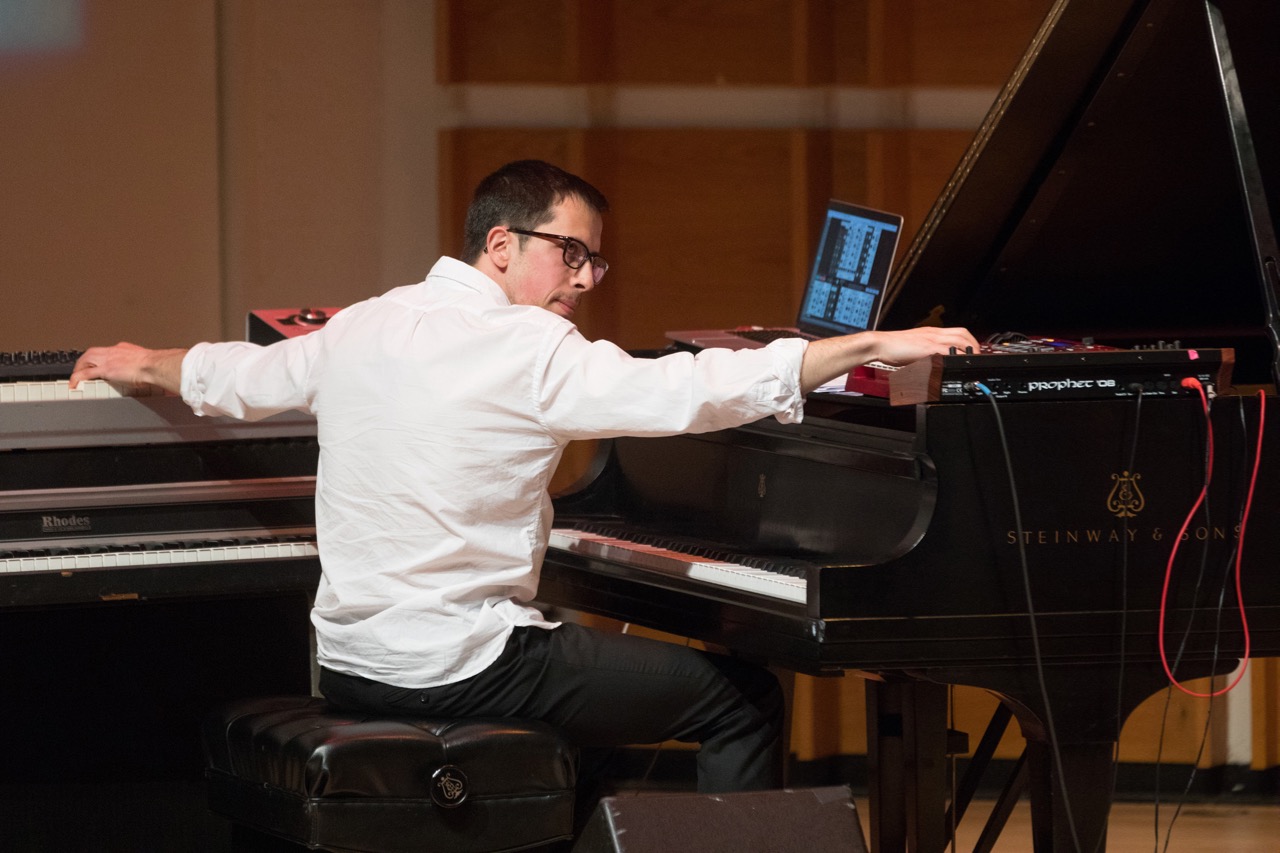 The suite’s loose division of labor allowed the set to transition from cathartic sections to more melancholic ones. But since Mivos also sounded so spot-on when merging with Gilmore’s swinging and/or hip-hop-influenced beats, I was eager for more of that particular sound. Still, leaving a show with that feeling is probably the ideal result of a festival trying to foster new conversations between aesthetics.

For programmers and labels interested in changing the way we talk about genre, hip-hop has been one of the most difficult tongues to master—rap’s mainstream style changes up more quickly than would-be fusionists can track, making many crossover attempts appear obsolete on arrival. And work with underground emcees presents different challenges; their language can be so insular and specific that it admits few outsiders. But projects like Akinmusire’s with Kool A.D. and the Mivos Quartet show that select groups can speak the language of rap, jazz, and classical music at the same time. Their new grammar is real.