Literature
Why Did I Ever 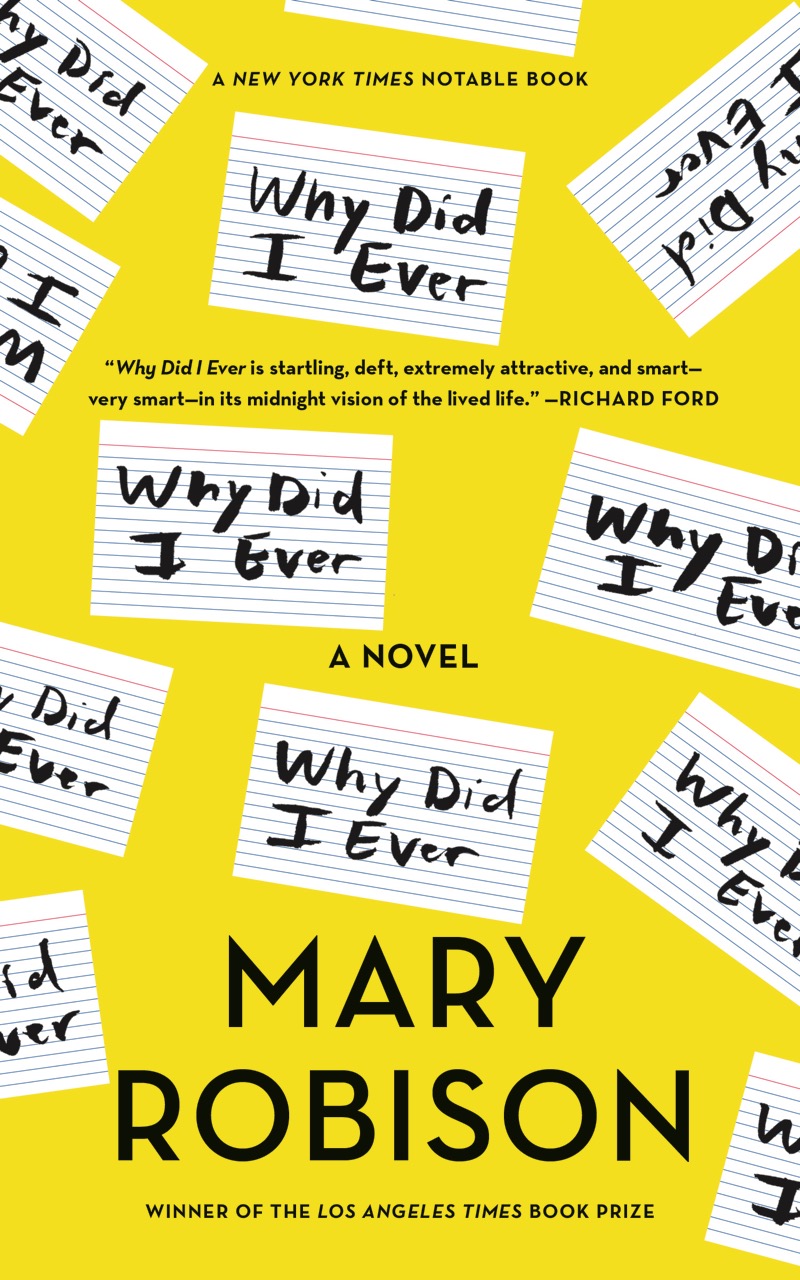 It would be bold to claim that Why Did I Ever, Mary Robison’s 2001 novel in 536 short chapters, both predicted Twitter and precociously perfected the form, so I’ll start with an easier proposition: Robison’s novel—reissued this month—is an American classic, the spiritual spawn of Elizabeth Hardwick’s Sleepless Nights and Renata Adler’s Speedboat, and the missing generational link between those and recent works like Jenny Offill’s aphoristic divorce drama Dept. of Speculation, Rachel Khong’s diaristic Alzheimer’s comedy Goodbye, Vitamin, and the entirety of Tao Lin’s hoodie-clad oeuvre.

Despite a positive reception (it won the LA Times Book Prize for fiction and drew praise from Cathleen Schine in the New York Times Book Review), Robison’s novel had the bad luck of wrong place and time. It was a work of sardonic wit in the post-9/11 climate of magical earnestness, and one narrow in scope during a moment that saw the reemergence of big social novels by men named Jonathan. These novels arose, in part, in response to the so-called Kmart realism of the 1980s, of which Robison was a practitioner. She wasn’t celebrated to the same extent as other members of her cohort, Raymond Carver and Amy Hempel among them, but her early stories—she published five books between 1979 and 1991, including three collections of short fiction—are exemplars of the genre: compact slices of life, written in precise and exacting prose, and mostly set in a lower-middle-class white America far from the coastal elite. Like Carver and Hempel, Robison’s editor at Knopf was Gordon Lish, whose surgical excisions on Carver’s stories have been argued over ad infinitum. Robison, too, had a complex relationship with Lish, whom she has called “an overbearing bullying type of person,” but also, “generous and helpful and very sane sometimes.”

Why Did I Ever arrived during an impasse for Robison, who’d “fired” Lish, left Knopf, spent time in Hollywood as a screenwriter and script doctor, and hadn’t published in a decade. Battling writer’s block and depression, she’d taken to driving aimlessly at night under the influence of Ritalin, chain-smoking and talking into a tape recorder. Parked beneath streetlamps, with her sunroof open, she transcribed the tapes on an electric typewriter plugged into her cigarette lighter.

These jottings became Why Did I Ever, in which a Hollywood script doctor spends her nights high on Ritalin, driving around the American South. Despite the stimulants, On the Road this is not. Kerouac’s Sal and Dean lit out in bromantic search of American grandeur. As Vanessa Veselka pointed out in her 2013 American Reader essay on the lack of female road narratives, women aren’t afforded this luxury: Who wants to seek the mad ones when they might rape and kill you? Robison’s refusal to fetishize cars and rest stops is refreshing. It’s also a source of humor, as in the pancake breakfast that would have been better if she’d eaten its “depiction on the menu.” The highway’s revealed for what it is, not freedom incarnate, but a liminal space filled with mediocre food. Robison’s narrator, Money Breton, drives thousands of miles, but there’s never the sense that she won’t turn around. For an adult—a mother—the road is a temporary respite at best.

Back home, Money’s got problems. She owes back tax to the IRS, has two quasi-boyfriends of the man-child type, and she’s been hired to resuscitate a doomed romantic comedy featuring Bigfoot as the male protagonist. Her daughter is a recovering addict and functioning pain in the ass, and Money’s doctor is onto her Ritalin abuse. Furthermore, her son, Paulie, is in the hospital convalescing from a violent sexual assault.

Paulie’s assault—the gruesome details of which are teased out slowly as the novel progresses—weighs heaviest on Money. She feels helpless and useless, unable to offer the comfort that she thinks a mother should. So Money drives. She also alphabetizes the food in her cabinets, paints her books and office supplies, goes around her apartment with a glue gun “making adjustments,” and affixes labels that say “solid gold” to household objects. Money writes letters to Sean Penn (“Would you have any big objection to my going by the name of ‘Mrs. Sean Penn’? I’ve tried introducing myself with it a few times already and it always gets a good reaction”) and forges letters to herself, including one from the IRS that reads: “You are paid in full.” The question is not whom she’s trying to fool, but why she thinks it will actually work. One chapter reads in its entirety: “I’ve chosen now as the time to be sick in a bucket.” As if there’s any choice involved.

Robison has said that the chapters—most are numbered, though some have titles like “Buy Me Something” or “Men Who Are Too Young”—could be shuffled. But the numbering implies an attempt, however futile, to impose some kind of order. Or, at least, the illusion of it.

Speedboat and Sleepless Nights are the models here: spikey, fragmented novels that blur the line between fiction and non-. But those are past-tense books that traffic in reflection, even if it’s the unsentimental sort. Adler and Hardwick dismantle linear narrative to better represent how memory works. Robison tries to reassemble it, in part to prove just how impossible that is.

Why Did I Ever’s pathos comes from its present tenseness; there’s never a sense that things will work out. This is what makes it feel so of the moment. Twitter is the great medium of the ongoing now. It’s a place where context is largely absent and history, essentially, doesn’t exist. It’s also a place where one-liners are the only coping mechanisms we have.

Chapter 493: “I must always remember that the best thing I could hope for is that this script passes muster, the movie gets made, and my jokes are made known to dumb white people.”

A better précis of writerly futility in 2018 would difficult to find—and she didn’t even use all 280 characters.

Adam Wilson is the author of the novel Flatscreen, and the collection of short stories What’s Important Is Feeling. He is a National Jewish Book Award finalist, and a recipient of the Terry Southern Prize. His work has appeared in the Paris Review, the New York Times Book Review, Tin House, Bookforum, VICE, and the Best American Short Stories, among many other publications. He lives in Brooklyn and teaches regularly at Columbia University’s MFA Writing program.