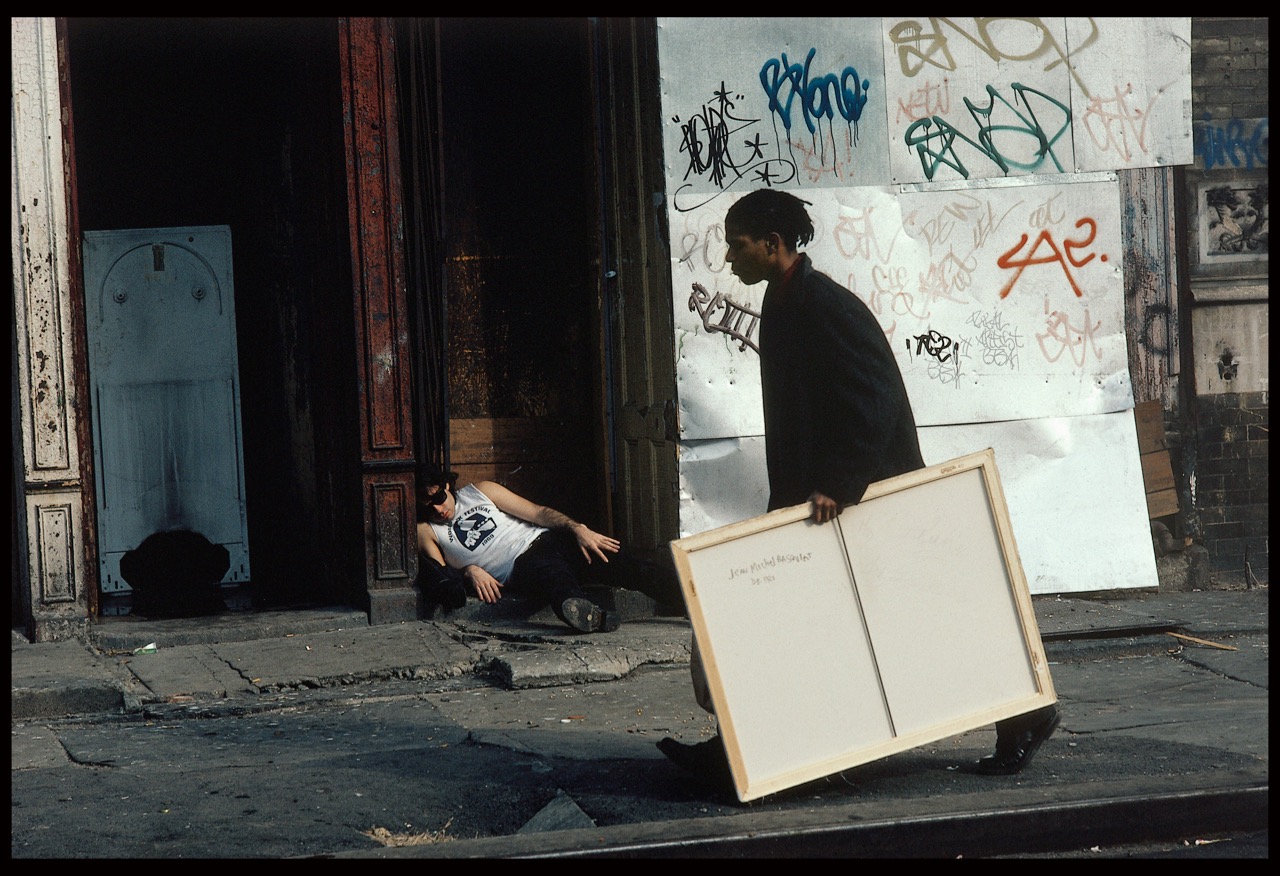 New York boasts more nostalgists per square mile than any other metropolis. The city was always better, the usual lament goes, before X, a variable that could refer to a particular year or mayoralty, the arrival or shuttering of a certain chain. Providing glimpses of a beloved street, boîte, building, etc., movies that are filmed in New York (whether five or fifty years ago) can further stoke these sentimental attachments. That’s especially true if the adored structure no longer exists, an almost inevitable scenario in a city that razes and rebuilds as compulsively as New York does. “Every film is a documentary of its own making,” Jacques Rivette once said. A corollary of that aperçu: every film shot in NYC is a documentary of the city’s own unmaking.

Much in Edo Bertoglio’s Downtown 81—an aurally dense, fanciful travelogue of sorts mainly filmed south of Fourteenth Street in December 1980 and January ’81—has vanished, not least its lead performer, Jean-Michel Basquiat, who died in 1988 at age twenty-seven. He stars as Jean, a struggling, charismatic artist, a character not too far removed from the painter himself at the time; Basquiat was several months away from his first solo gallery show. Gone, too, as of 2017, is Downtown 81’s writer, Glenn O’Brien, the sartorial sage then covering the city’s efflorescing No and New Wave music scenes for Interview—where Bertoglio was working as a photographer—and hosting the public-access show TV Party, on which Basquiat was a frequent guest. (O’Brien is a fleeting presence in the film, his character identified as “Rock Critic.”) Viewers of Downtown 81, which follows Jean over the course of twenty-four hours—a span that finds him released from the hospital, evicted, selling a canvas, and bumping into friends—become de facto archaeologists. We peer into the long-since-shuttered clubs that are key sites in the movie (the Peppermint Lounge, the Rock Lounge, the Mudd Club) and gaze at the rubble-filled lower Manhattan blocks that Jean traverses, where a Whole Foods or Capital One bank may now stand. 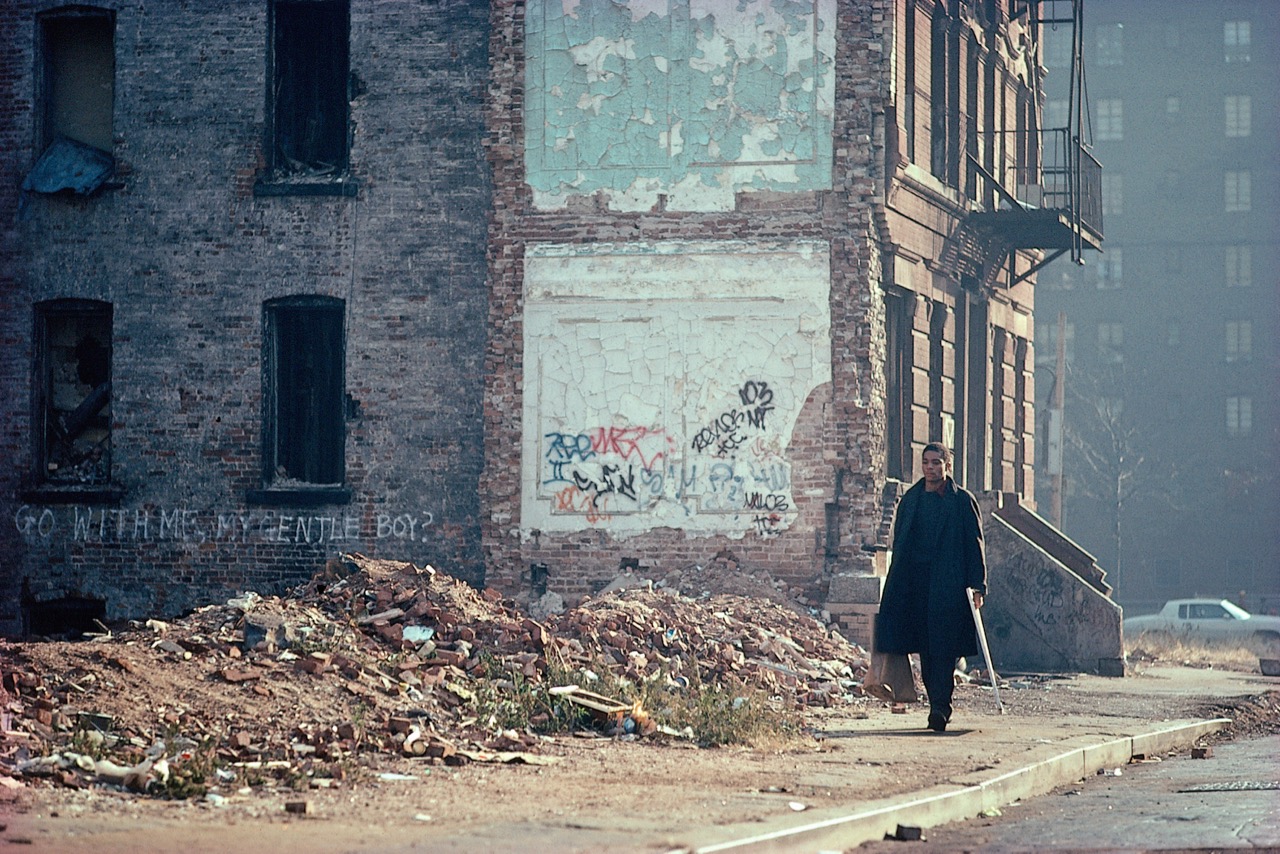 My challenge in writing about Downtown 81, which will play at Metrograph in a new 35mm print and later open in cities around the US, is not to slip into mawkish reverie about one very selective iteration of NYC—particularly since I didn’t move to the city until 1996, well into the “cleanup” and hyper-gentrification of the Giuliani era. The Mudd Club, for me, may as well be a Lascaux cave. Yet the film seems to actively court wistfulness. During a prologue featuring cottony clouds and dream-pop chords, off-screen narrator Debbie Harry coos these corny lines: “Fairy-tales can come true. Sometime it might happen to you, especially when you’re young in New York. But once upon a time, this place was the wild frontier and every youngster who was fast on the draw showed up on these streets to try his hand.”

Significantly, that introduction was added to Downtown 81 shortly before its world premiere at the Directors’ Fortnight program at Cannes in 2000; a host of byzantine post-production troubles accounted for the nearly two-decade gap between filming and theatrical debut. The gauzy new-millennium preamble pines for a milieu already extinct, dousing embalming fluid on the Lower East Side debris that fills the frame.

The fairy-tale conceit is maximized late in this seventy-one-minute film, as Harry, playing a slatternly bag lady, beseeches Jean for a smooch—a kiss that transforms her into a princess who grants him a valise full of cash. (The royal raiment suits her: Downtown 81 was shot at the height of Blondie’s fame; “Rapture” features prominently on the soundtrack.) Inadvertently, Downtown 81 also became a ghost story. Once the film was retrieved from the lab following years of production-company legal snags, the dialogue tracks could not be found. That dilemma was solved by asking the main participants to rerecord their lines, but it necessitated casting Saul Williams, a renowned slam poet at the time, as the voice of the now-dead Basquiat. The eerie disjunction between body and speech—Williams possesses a much more sonorous timbre than the painter did—adds to the haunting quality of Downtown 81, giving gravitas to its carnival-like ambience.

Ample scenes of revelry make sense in a project that was first called New York Beat; Downtown 81 thrills as a stealth rock doc, showcasing the variety of musical idioms flourishing in the city. We are treated to (mostly) live performances—in clubs, recording studios, freight elevators, and elsewhere—by, among others, rapper Kool Kyle, the art-funk ensemble Kid Creole and the Coconuts, and No Wave deities DNA. 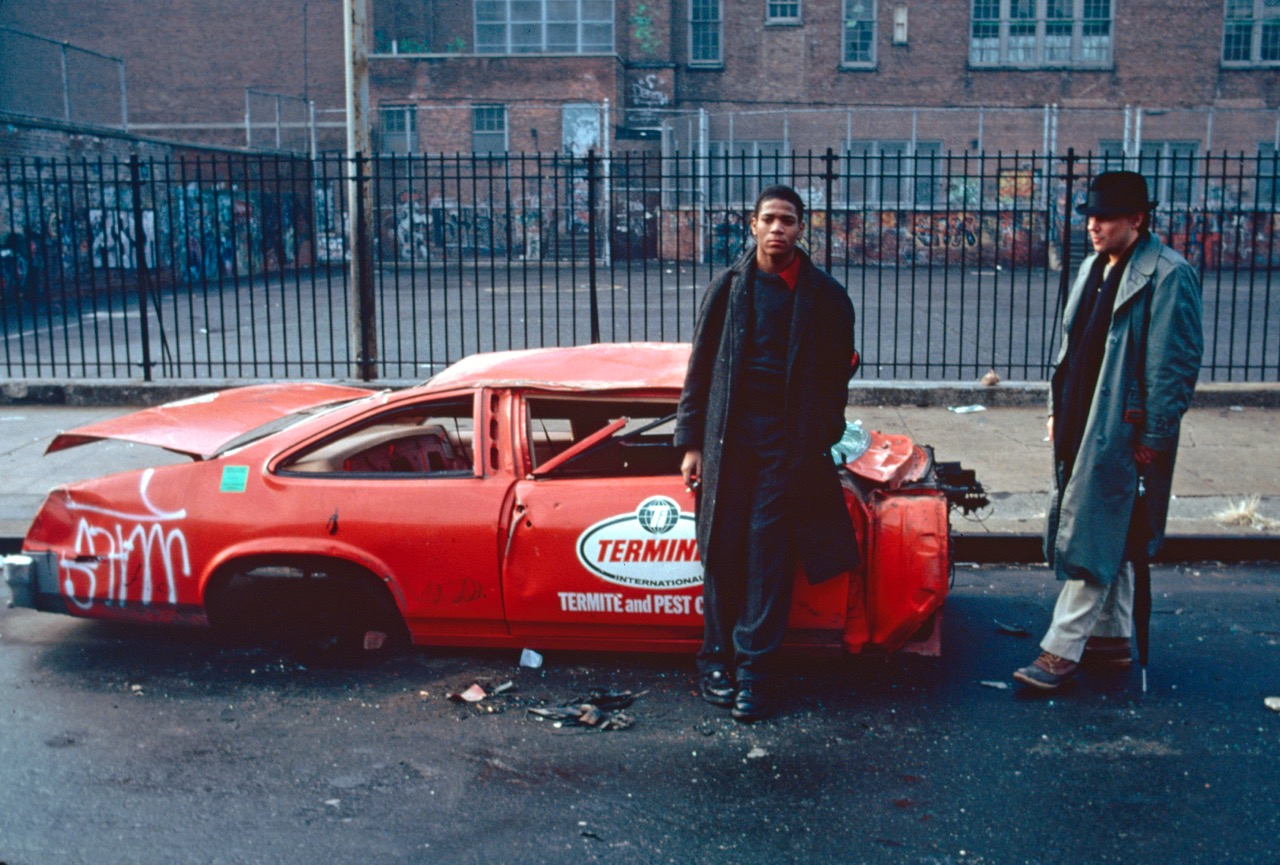 Many components of Downtown 81 are undeniably seductive, and I encourage anyone reading this to see it. But, in my effort not to be narcotized by the fine dust of nostalgia, while watching I kept reminding myself that, despite the film’s definitive title, there was no one monolithic downtown during the era it encapsulates (years that fall within the first half of Ed Koch’s long run as mayor, and that mark the first reported AIDS cases in New York). Here, for example, is how the late art critic and historian Douglas Crimp remembers the Mudd Club—the Valhalla of Bertoglio’s movie—in his detail-rich, disco-devotional memoir Before Pictures (2016): “I hated it. It was one of the principal venues of the ‘disco-sucks’ backlash. The dance everyone did there was called the spastic. It’s one of the only dances I could never learn to do.”

Or consider another downtown movie, made just a year after Bertoglio’s and, in many ways, the gloomy inverse of his film: Susan Seidelman’s Smithereens (1982), whose adrift central character, Wren (Susan Berman), like countless New Yorkers before and after her, demands fame, even though her only apparent talent is for aggressive self-promotion. Both films end with their protagonists on a stretch of the West Side Highway: Jean—whose star is rapidly ascending, as Basquiat’s was at the time—in a car he just bought with his magical windfall, Wren about to fall into an abyss of abjection. 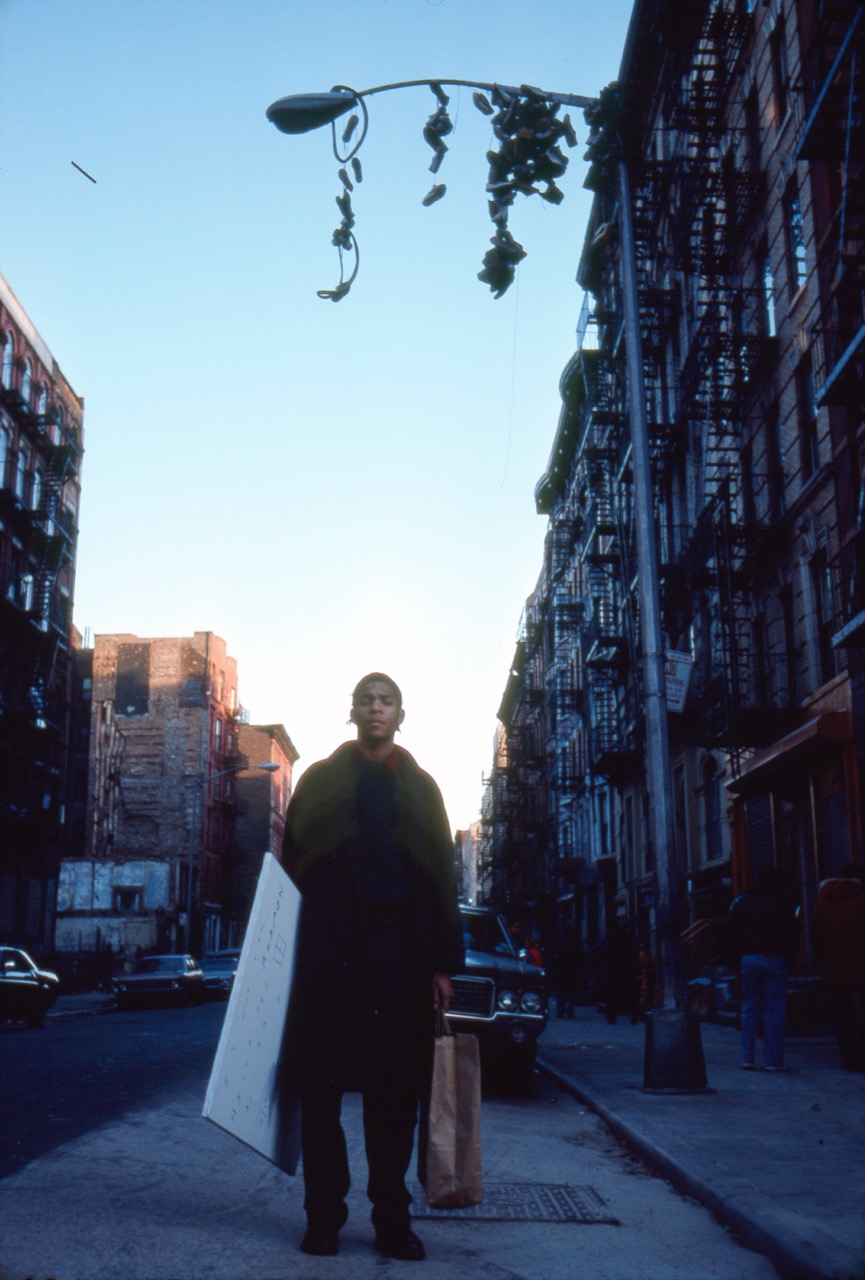 The best companion piece to Downtown 81, though, is a small, potent exhibition uptown, Basquiat’s “Defacement”: The Untold Story, curated by Chaédria LaBouvier and on view through November 6 at the Guggenheim. (The museum looms behind Jean, as he excitedly lopes southward after his release from the hospital, in the opening minutes of the film.) Basquiat painted Defacement (the informal title for The Death of Michael Stewart) in 1983 to commemorate Michael Stewart—like Basquiat, a young black artist—who died while in police custody in September of that year. Stewart was arrested for allegedly writing graffiti in the L-train station at First Avenue and Fourteenth Street: a grim, gruesome episode often overlooked in romanticized accounts of a decade in a fetishized swath of Manhattan.