Drugging, dwarf-tossing, and Scarface on repeat: a film series about the avarice and debauchery of the rich. 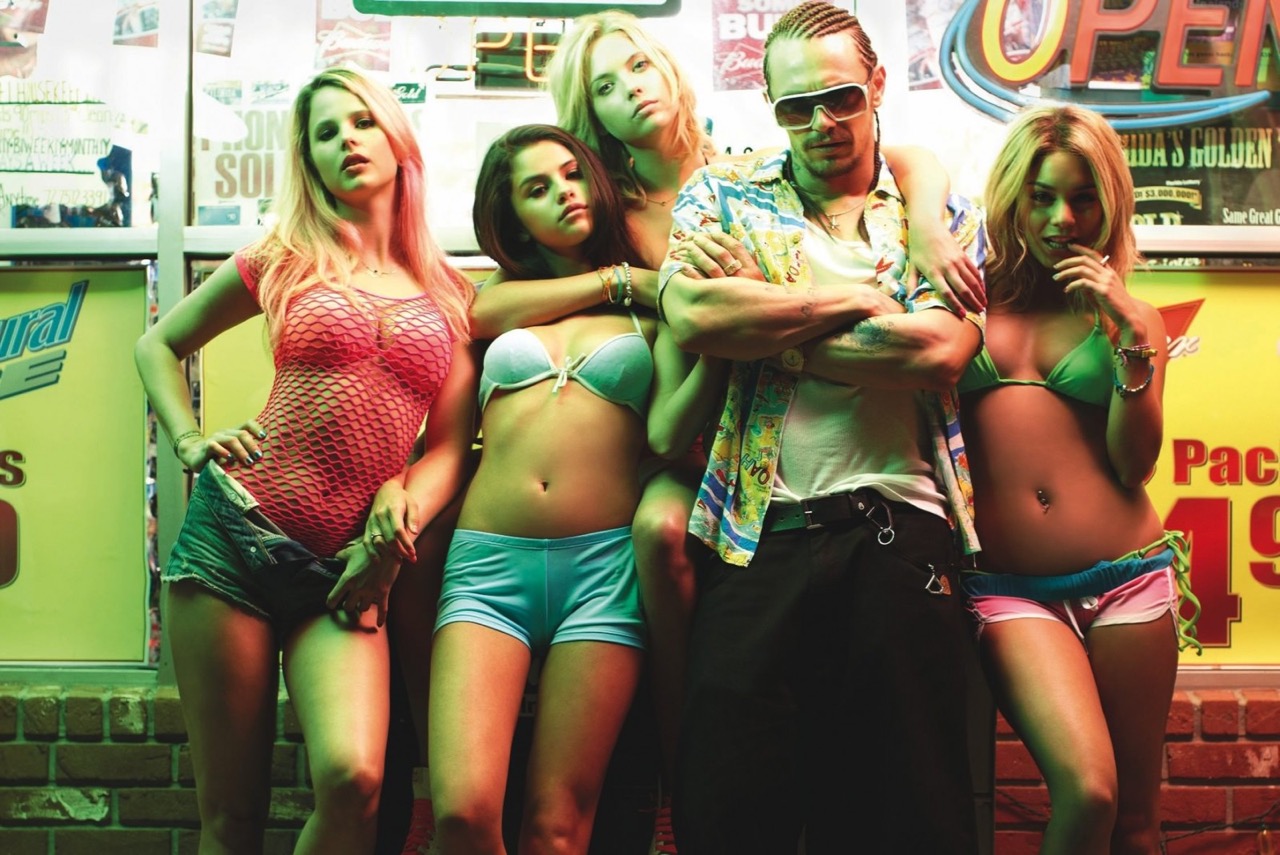 Nearly every movie in “Generation Wealth,” a series at Anthology Film Archives about conspicuous consumption and the pathologies of turbo-capitalism, both gluts and depletes at the same time. The paradoxical metabolic response is often prompted by the mind-numbing inventories, with their surfeit of goods, both high and low, so prevalent in these films. Alien, for example—the corn-rowed Florida rapper and hustler played by James Franco in Harmony Korine’s lysergic Spring Breakers (2012)—exhorts his college-age female houseguests and soon-to-be accomplices to “look at my shit” before cataloguing it with deranged glee: shorts, designer T-shirts, gold bullets, “Scarface on repeat,” Calvin Klein’s Escape, blue Kool-Aid, “dark tannin’ oil,” machine guns. The names of modish or chichi eateries in late-1980s New York—Arcadia, Indochine, Espace, River Café, Le Cirque—clot the dialogue in Mary Harron’s American Psycho (2000), her excitable adaptation of Bret Easton Ellis’s 1991 novel. These barbed studies of abundance are designed, some more deliberately so than others, to exhaust. 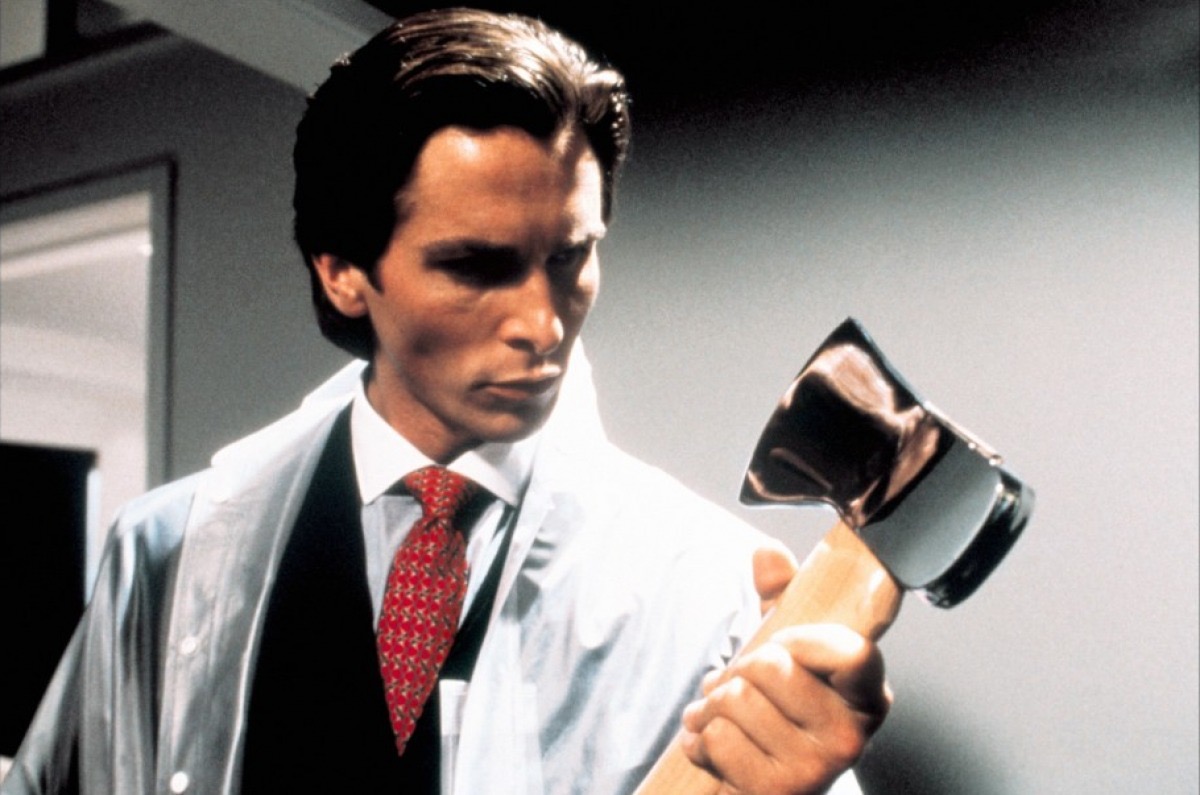 The Anthology retrospective is held in conjunction with (and takes its title from) Lauren Greenfield’s exhibition Generation Wealth, on view at the International Center of Photography through January 7, 2018. Greenfield, who’s been documenting, via still- and moving-image work, what she calls “the influence of affluence” for the past twenty-five years, rose to prominence in 1997 with her first major show, Fast Forward: Growing Up in the Shadow of Hollywood. As you might expect, tweens and teens in Los Angeles County—whether real or fictional, and from various socioeconomic strata and different decades—are the most heavily represented demographic in the Anthology series. 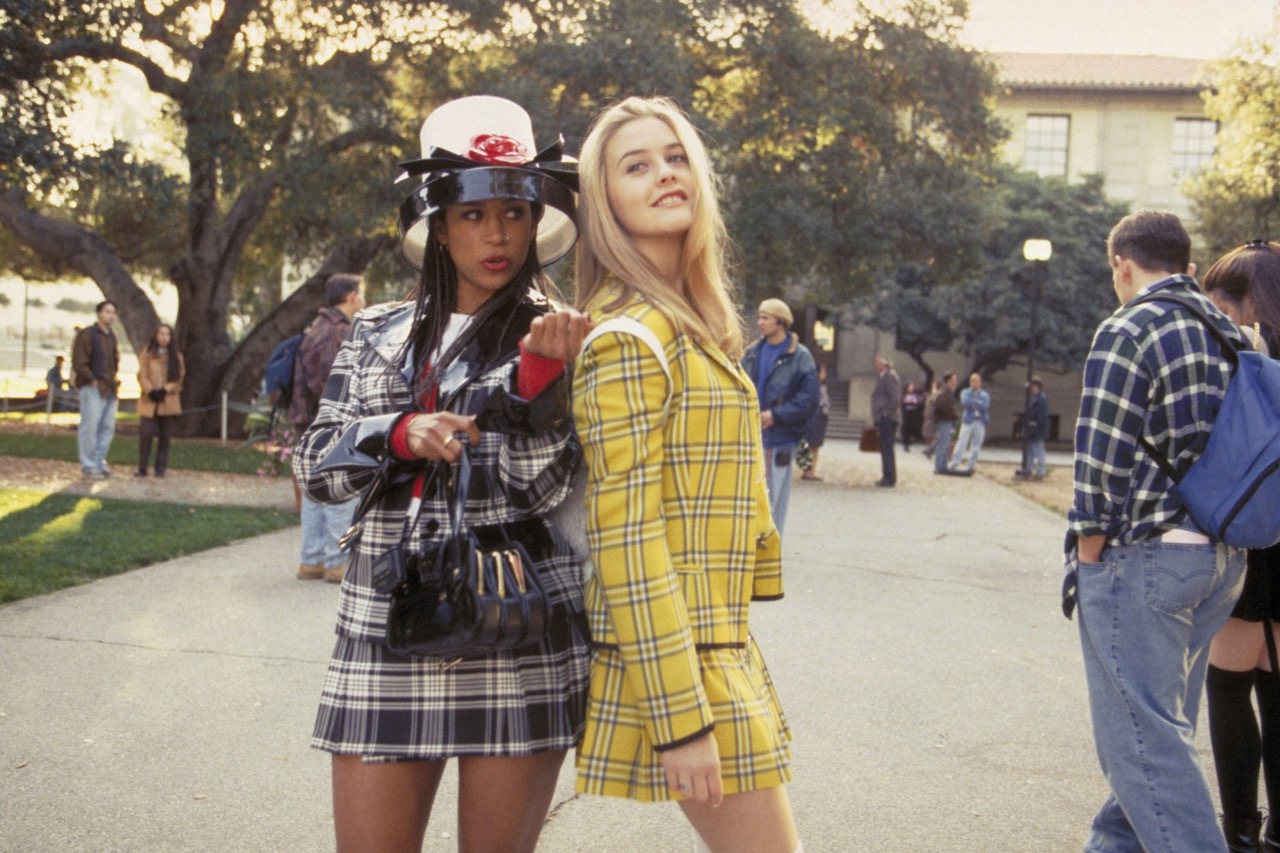 One of these pint-size LA denizens, Annika, a voluble twelve-year-old interviewee in Greenfield’s documentary short Kids + Money (2008), evinces knowledge of the sweatshops in Indonesia where a garment she covets was likely made, but these faint stirrings of conscience are quashed by her desire to have. (Annika’s mother, who is both martyr and enabler, responds: “Her goal is to get as much out of me as she can.”) About as well-versed in world events as Annika but wealthier and even more indulged is Cher Horowitz (Alicia Silverstone), the sixteen-year-old Beverly Hills resident at the center of Clueless (1995), Amy Heckerling’s arch update of Jane Austen. The Clinton-era Emma reveals, in her debate class, a nominal commitment to pro-immigration policies, especially for Haitians—pronounced “Hate-ee-ans”—but most of Cher’s philanthropic energy involves making over a new student, benevolence mandating multiple trips to the Westside Pavilion. But Annika and Cher stand as Sontag-level public intellectuals when compared with the adolescent San Fernando Valley housebreakers in Sofia Coppola’s The Bling Ring (2013), who scroll Dlisted and TMZ for tips on which VIP (or quasi-celebrity) residence to rob. 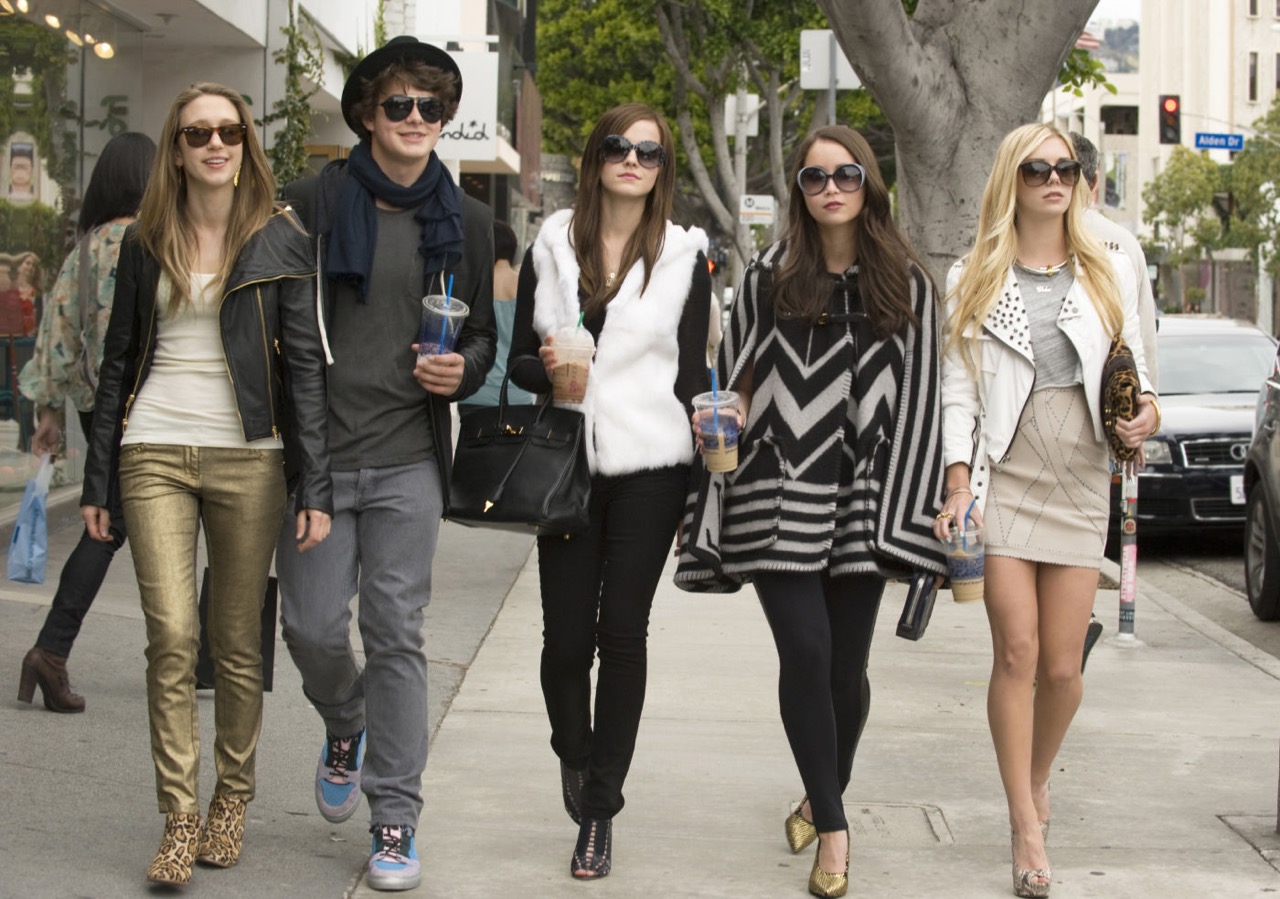 Based on an actual band of anomic teens chronicled in a 2010 Vanity Fair article, Coppola’s movie grows remote and repetitive, the torpor the result of the unvarying cycle of activities the kids devote themselves to: clubbing; drugging; selfie-taking; breaking and entering; marveling over, caressing, and purloining the luxury brands they come across in, say, Paris Hilton’s “nightclub room,” the sanctum of the heiress and reality-TV star’s mansion. Released theatrically in the US just three months after Spring Breakers, Coppola’s film is cool and listless, whereas Korine’s—wholly fictional but all too plausible—scorches with its relentless debauchery and nihilism. 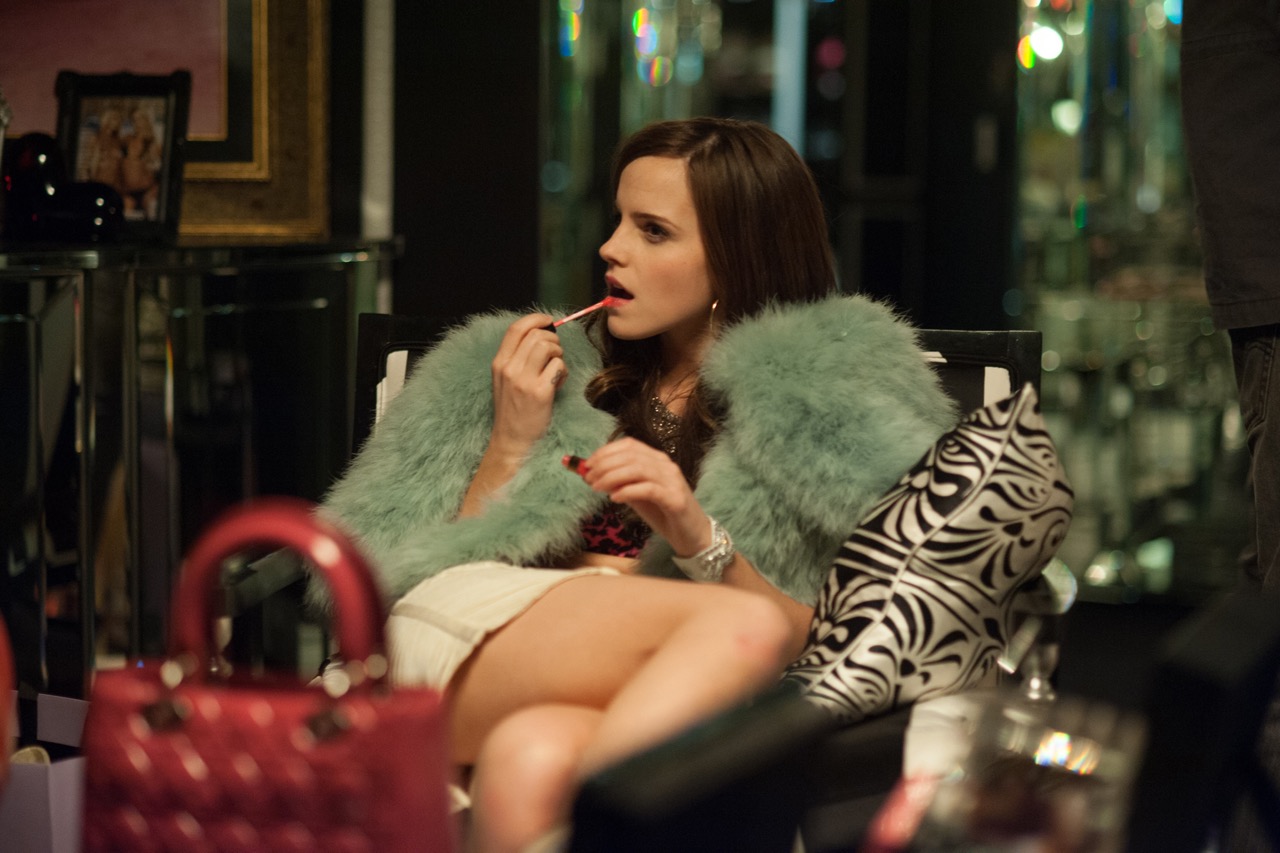 However different in tone and tempo, though, The Bling Ring and Spring Breakers both boast supremely perverse casting choices—a radical rebranding of young actors who had helped generate untold millions for kid-marketed entertainment juggernauts. By far the most famous of Coppola’s juvie ensemble, Emma Watson, here just two years removed from the Harry Potter franchise that made her a superstar, gives a revelatory performance as Nicki: hearing the plummy-voiced British actress unerringly deliver, in sluggish, elongated vowels, SoCal banalities (“And karma cleanses my journey”) provides Coppola’s largely anodyne movie with its most biting satire. Likewise, the sight of Selena Gomez and Vanessa Hudgens, actresses who were once mainstays of the Disney Channel, playing two members of the distaff quartet partying hard in the Tampa Bay area heightens the queasy dissipation of Spring Breakers.

Alien’s ludicrous checklist of his most treasured possessions cited above highlights the core motif, never articulated outright but always demonstrated, of “Generation Wealth”: having money is not the same thing as having taste. Vulgarians and arrivistes abound in the Anthology retrospective, like Jordan Belfort, the real-life stock-market scammer strenuously played by Leonardo DiCaprio in Martin Scorsese’s scabrous black comedy The Wolf of Wall Street (2013). A dental-school dropout raised in Bayside, Queens, Belfort hires other boors who make obscene amounts of cash in the 1980s and ’90s by peddling their boss’s pump-and-dump schemes. Their lucre funds not only extremely grotesque and piggy behavior (dwarf-tossing, orgies on private planes) but also garishly opulent lodgings, gilded eyesores made possible by an economic system as riotous as those as it rewards.

Much less ribald though replete with its own obscenities, The Queen of Versailles (2012), Greenfield’s second feature-length documentary, tracks David and Jackie Siegel, a super-rich couple in Orlando, Florida, both before and after the 2008 financial freak-out. Thirty years his spouse’s senior, septuagenarian David has made his fortune as the founder of Westgate Resorts, a time-share empire; Jackie, a Binghamton, New York, native who was crowned Mrs. Florida in 1993, met the tycoon (he is her second husband, she his third wife) through the beauty-competition circuit. In their sit-downs in rococo chairs with Greenfield, David brags of getting George W. Bush elected and brandishes photos with Donald Trump; Jackie crows, “When I found out that I could have nannies, I just kept having kids.” (The Siegel brood includes seven biological children and one adopted teen.)

However vast, the Siegel manor is cluttered—with people, pets (and their excrement), and a mass of detritus of widely varying value. Forced to “economize” after the fiscal crash of ’08, Jackie still treats herself to a tin of caviar at Christmas. She approaches the delicacy with some trepidation, though; it appears to bring none of the gustatory pleasure found in the enormous grease-stained bags she brings home from McDonald’s for herself and the kids. Jackie’s palate may lead some viewers to consider what the rich really like to eat. Others may wonder what it would be like to eat the rich.