Film
The Marrying Kind and
It Should Happen to You

The New Yawker comedienne of classic Hollywood cinema gets
barefoot and bubbly. 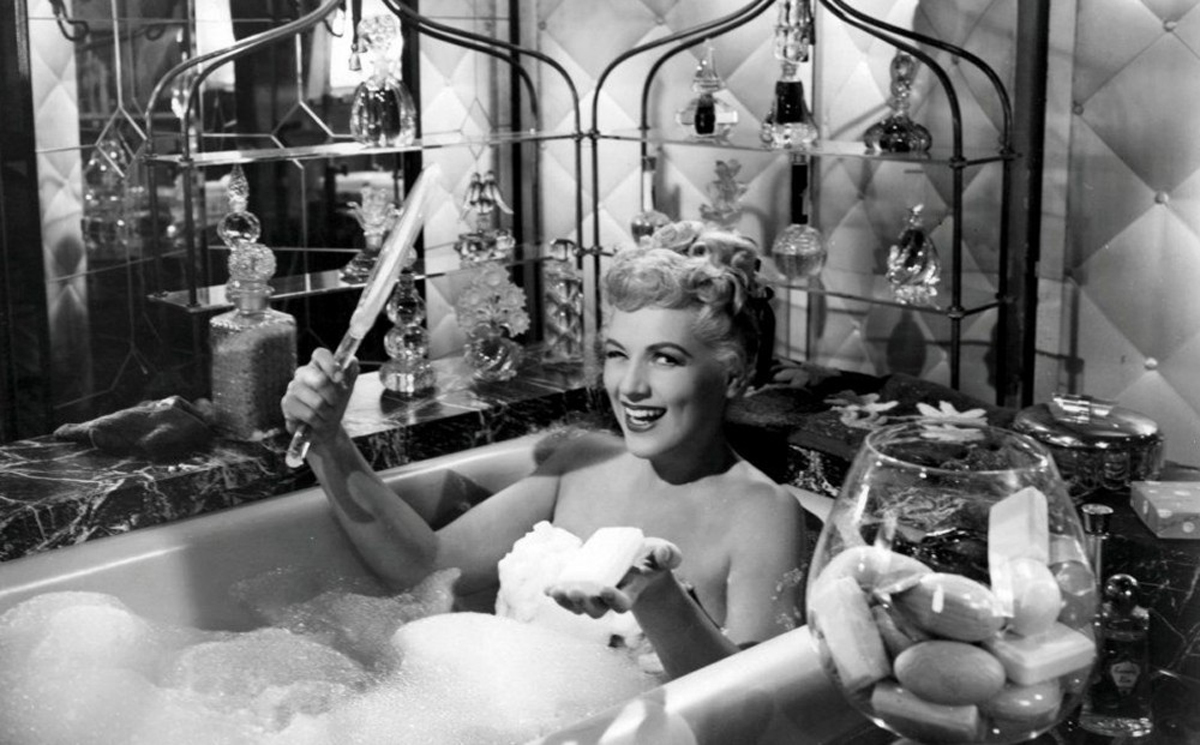 Judy Holliday as Gladys Glover in It Should Happen to You. Courtesy Film Forum.

The Marrying Kind and It Should Happen to You, both directed by George Cukor, screening as part of “NYC’s Movie Renaissance 1945–1955,” Film Forum, 209 West Houston Street, New York City,
through February 10, 2022

While it may be a corny paradox to say that it takes a special kind of genius to play dumb, the great actress Judy Holliday nevertheless revealed the multiple strata underlying her exquisite portrayals of simplemindedness. Writing in 1955, Kenneth Tynan hailed her as “now perhaps the subtlest comedienne in America,” one “whose technique did not depend on man-chasing” (unlike that of another blonde, Marilyn Monroe—at least when men weren’t chasing her). The British critic nicely summed up the typical Holliday heroine: “Rational conversation demoralises her; she regards it as a plot to ‘get at’ her. To preserve her dignity, she puts on a broad, meaningless smile, which conceals total incomprehension and lasts until the pressure on her brain is removed. Then, like a child let out of school, she is her chaotic self again. . . .”

This tonic chaos animates the two Holliday movies featured in the Film Forum series “NYC’s Movie Renaissance 1945–1955”: The Marrying Kind (1952; screening February 4 and 7) and It Should Happen to You (1954; showing February 4, 6, and 9). An echt Gothamite, the actress, born Judith Tuvim (“holiday” in Hebrew) in Manhattan in 1921, was reared primarily in Sunnyside, Queens. She attended the Upper East Side’s Julia Richman High School, an all-girls institution where she befriended Patricia Highsmith. (Anna von Planta, the editor of Highsmith’s recently published diaries, intriguingly notes that at Julia Richman, the writer and actress were part of a same-sex “(platonic) love triangle.” Holliday appears sporadically throughout Highsmith’s journals through 1945, the year Judy made her Broadway debut.) A year or so after high school, Holliday became a member of the Revuers, a comedy troupe that drew crowds at the Village Vanguard; this quintet also included Adolph Green and Betty Comden, later to become the lyricists and/or screenwriters of some of the most enduring Broadway and Hollywood musicals, like Singin’ in the Rain (1952). 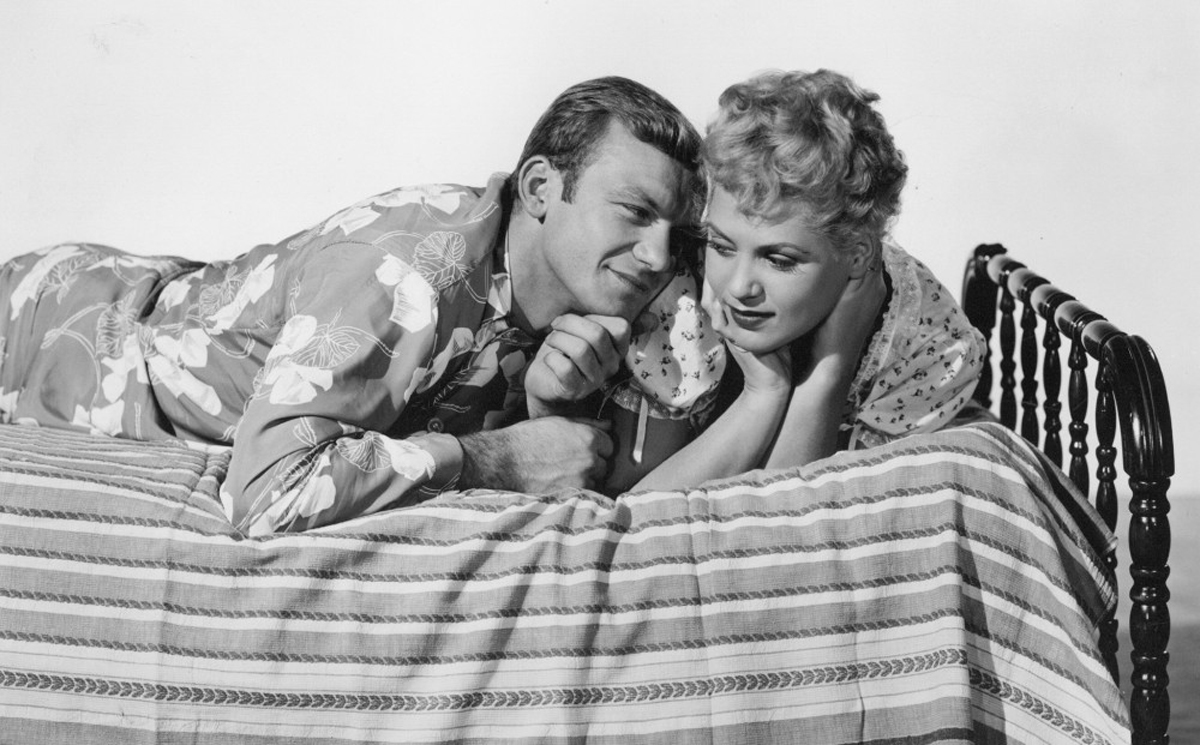 Holliday’s movie career commenced in 1944 with a small role in George Cukor’s fervently patriotic (and anomalous) Winged Victory. Five years later, she’d reteam with the director to make Adam’s Rib (1949), wherein Holliday’s Doris Attinger, a neglected, two-timed spouse, is defended against attempted-murder charges by Katharine Hepburn. It was the first of four Cukor-helmed comedies on which Holliday’s legacy rests; all were scripted either by the husband-and-wife team of Garson Kanin and Ruth Gordon or by Kanin solo. The second title in this quartet, Born Yesterday (1950), boasts Holliday’s most famous performance, as Billie Dawn, the coarse girlfriend of an even more boorish junkyard magnate, a role she first made indelible in Kanin’s 1946 Broadway hit of the same name.

Born Yesterday best showcases Holliday’s gift for what Tynan called the “Moron’s Revenge”: that instance “when, goaded beyond endurance by the blind, unreasoning intelligence of those around her”—in this case, usually William Holden’s upstanding journalist Paul, with whom Billie eventually falls in love—“she explodes in protest, turning on her persecutors with a terrible cry of ‘Bluarrgh!’ ” Although The Marrying Kind, which Gordon and Kanin wrote together, features Holliday in a less manic mode, the actress’s unassailable timing and instincts bring her character, Florence Keefer, a dispirited wife and mother, vividly to life. 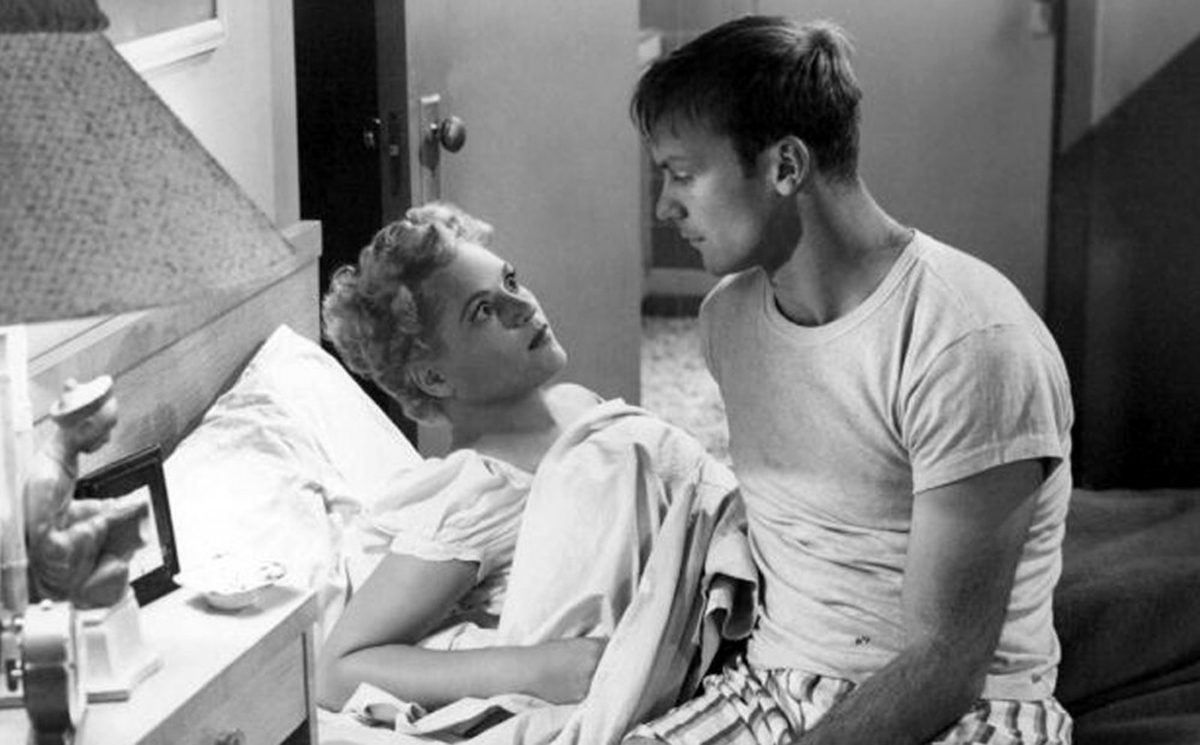 The film opens in Manhattan’s Domestic Relations Court, where Florence and her husband, the equally disconsolate Chet (Aldo Ray), have come seeking a divorce. The judge assigned to their case—a kind of midcentury Esther Perel—senses that a tiny flame hasn’t yet been extinguished between these two weary spouses and asks each of the Keefers to narrate how they met and other milestones in their relationship, prompting a series of flashbacks. Their initial encounter in Central Park is quickly followed by a honeymoon in Atlantic City before the film alights on its primary location: the modest apartment where Chet and Florence live in Stuyvesant Town, which will soon accommodate two kids. These working-class strivers—he’s employed by the Postal Service; she returns to clerical duties after Chet takes ill—are buoyed by big dreams. Chet comes up with “Slide-Airs,” essentially a prototype for Rollerblades, though someone else beats him to the patent office. Florence wonders whether flavored postage stamps could be the next big thing.

As the Keefers recount their accruing unhappiness over the years, punctuated by one unbearable tragedy, Holliday reveals a woman committed to modest acts of self-improvement. Marveling at the luxury of having some time for contemplation during her honeymoon week on the Jersey Shore, Florence vows to make it a regular practice: “I’m gonna do a half-hour of thinkin’ every day.” The line, delivered in Holliday’s signature outer-borough squawk (a diction vastly different from the actress’s own polished locution), typifies one of Florence’s defining qualities: her inviolable pride. Any sentence uttered by Holliday in her Cukor comedies, especially those with redundancies—“Frankly, I don’t even know what you’re talking about, frankly,” Florence remonstrates her husband—highlights her vocal agility. Her voice seems carbonated, her words like bubbles that form and pop as if in an egg cream. 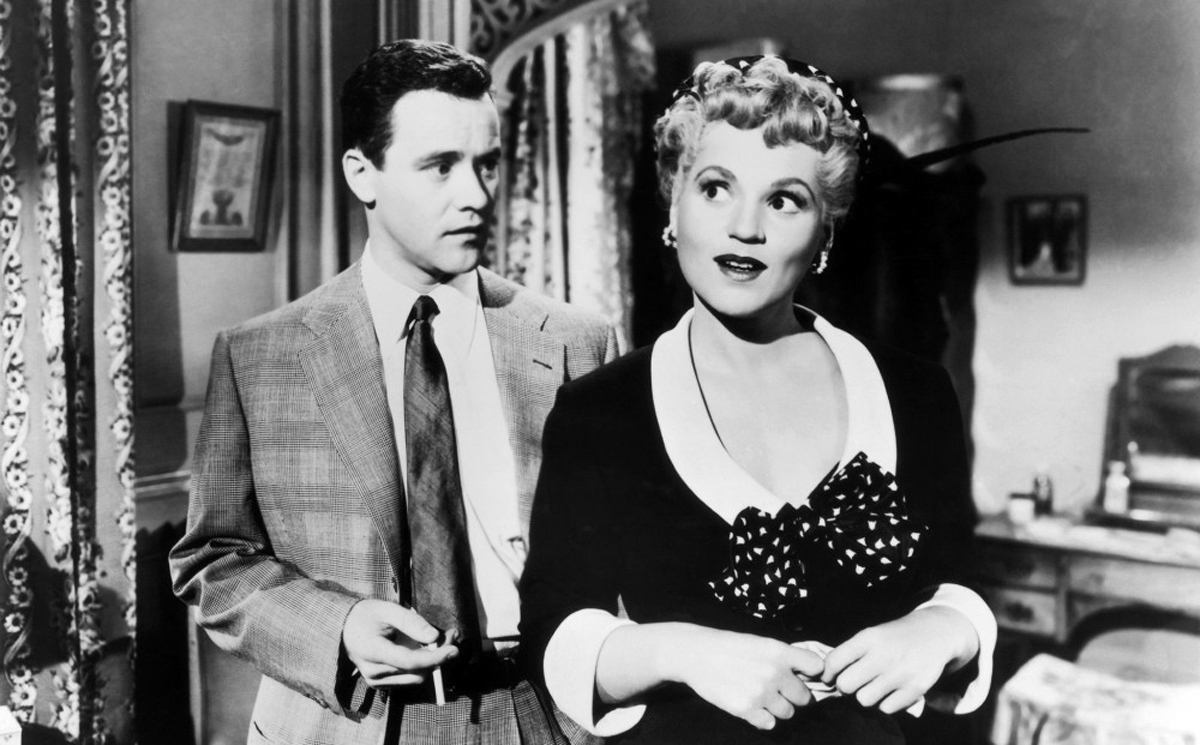 Jack Lemmon as Pete Sheppard and Judy Holliday as Gladys Glover in It Should Happen to You. Courtesy Film Forum.

When Gladys Glover—the Binghamton transplant living in a rooming house on West Sixty-First Street that Holliday played in the Kanin-scripted It Should Happen to You—wants to do some thinkin’, she takes off her shoes. We first see Gladys, modest pumps in hand, walking barefoot in Central Park, wondering what she’ll do now that she’s been fired from her job modeling girdles. As Gladys explains to Pete (Jack Lemmon), a documentary filmmaker she meets during her unshod stroll, she came to the city for the same reason that has lured millions of others: to try to make a name for herself. Ultimately, her name makes her. With the self-promotional cunning of the shrewdest Insta-influencer, she uses her savings to rent a billboard on Columbus Circle that reads simply GLADYS GLOVER. Fame follows, as does the meddling of an overweening bar-soap executive, Evan Adams III (Peter Lawford), who wants to buy that prime advertising space from Gladys. She is steadfast, calmly informing Adams’s hectoring advisers: “I don’t think I’m unreasonable. You’re the ones that are un-.” Never has a two-letter negative prefix been weaponized to such hilarious effect. 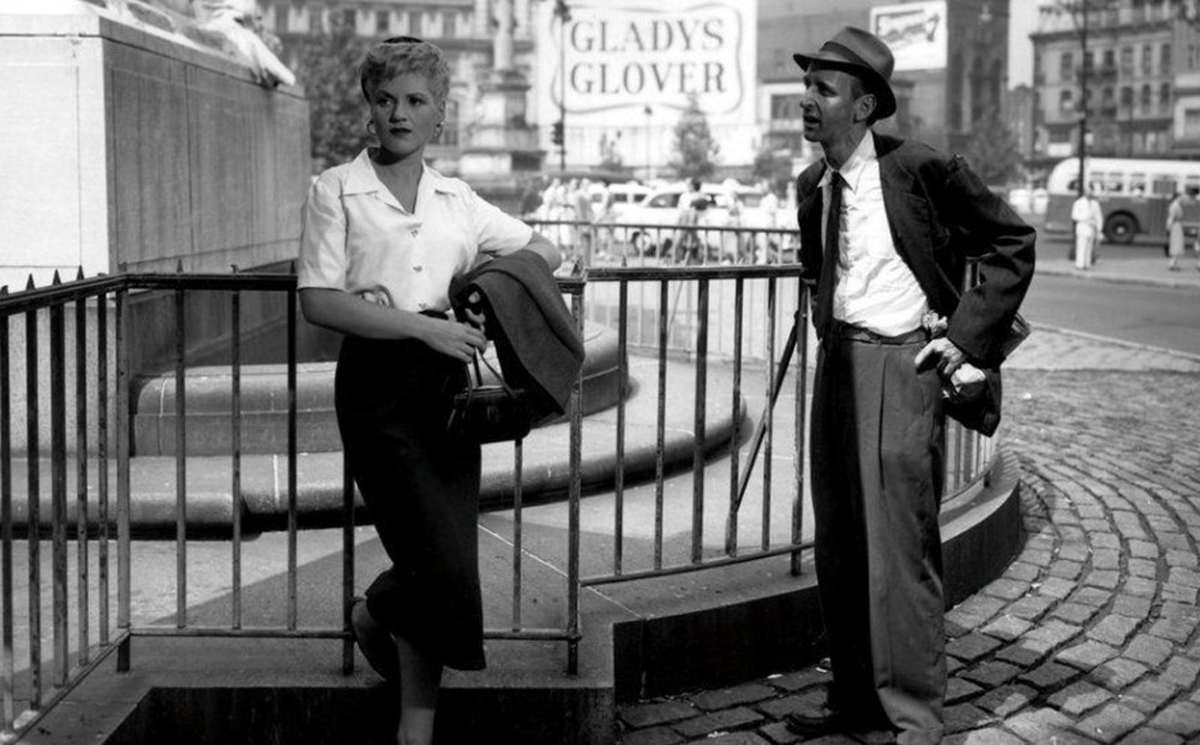 Judy Holliday as Gladys Glover in It Should Happen to You. Courtesy Film Forum.

Holliday made three more comedies after her collaboration with Cukor ended—none as good as her work with him—before her cinema swan song, the Vincente Minnelli–directed musical Bells Are Ringing (1960). As switchboard operator Ella Peterson, she reprised the lead role she played in the Broadway show of the same name, the book and lyrics of which were written by her old pals Comden and Green. She died of cancer in 1965 at the age of forty-three. An instant fan of Holliday’s ever since my first viewing of Born Yesterday more than two decades ago, I shall continue to honor her memory by repurposing Gladys Glover’s unimpeachable exit line whenever I need to beat a hasty retreat: “I think I’d better be going because I’m not having a good time.”