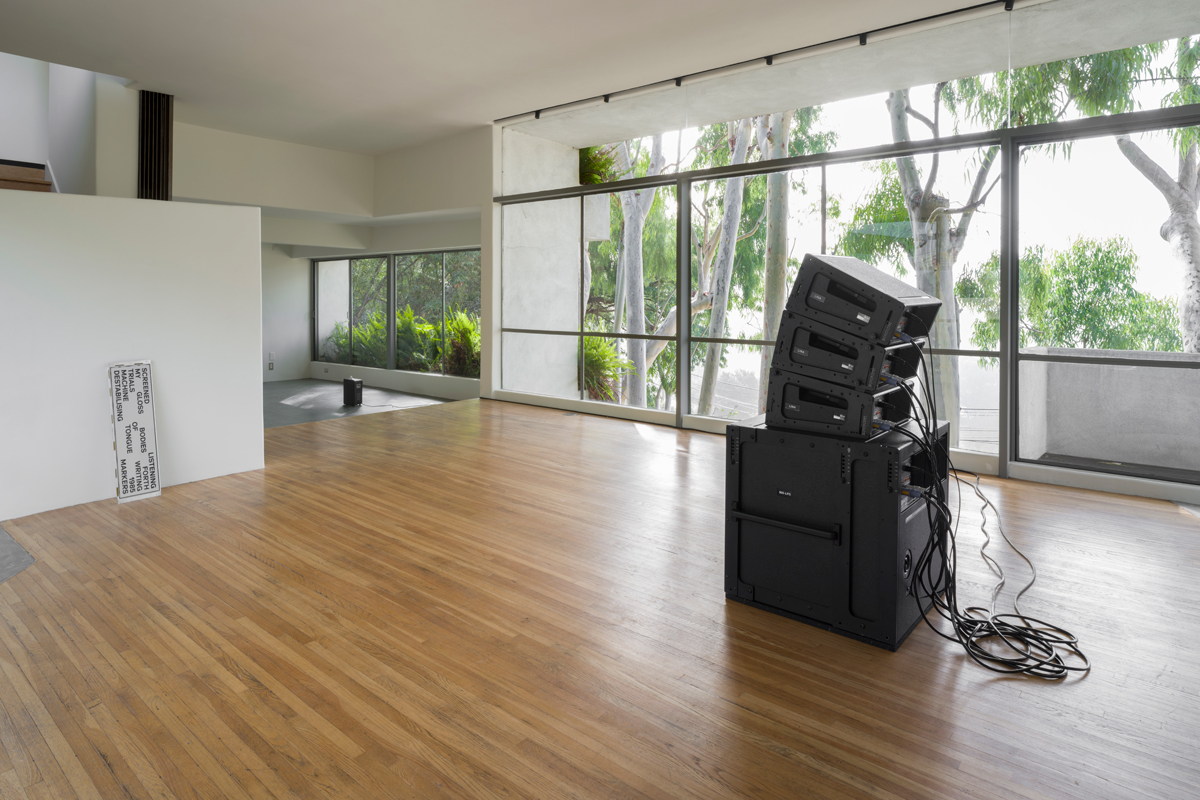 It is impossible not to have a deep sense of awe when you enter the Fitzpatrick-Leland House in Los Angeles, a striking white modernist abode perched on a verdant hillside overlooking Laurel Canyon. The residence was designed in 1936 by Rudolph Schindler, the famed Austrian-born architect who put a lasting stamp on Southern California. Like most spectacular LA residences, it’s hard to view the house in its full glory from the street. Once inside the space, you feel like you are floating above the city. There are walls of sparkling floor-to-ceiling windows filling the rooms with natural light. If you gaze below, you can observe cars zooming down Mulholland Drive and the glimmering expanse of endless city in the distance—the sort of dizzyingly wide-angle panoramas that you find in movies. But perhaps most impressively, you can see lots of grand old trees ensconcing the house in cosmic greenness. You are in a building, but you also feel as if you were exploring a forest. Wandering through the three-level house and perceiving its interplay with nature is a profound experience. 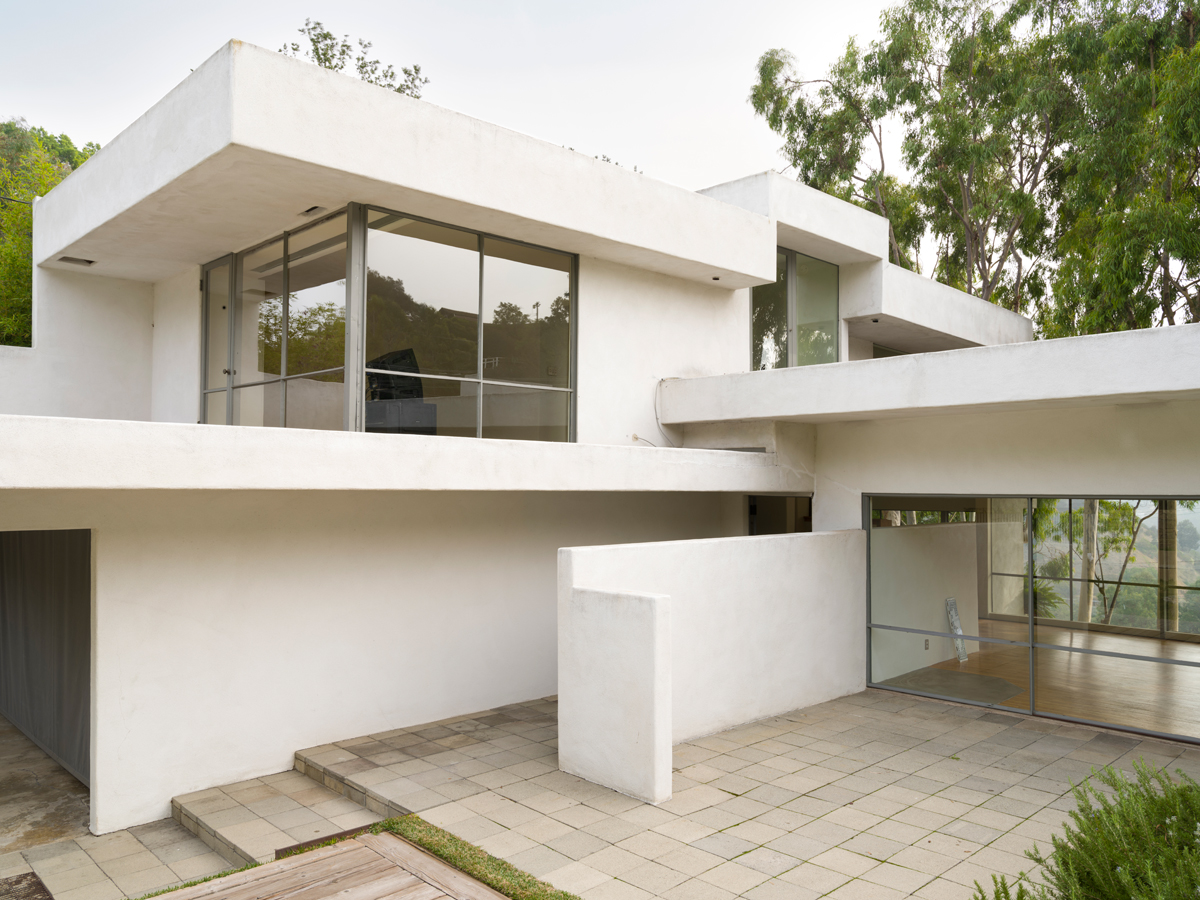 The property is one of the area’s most hidden and beguiling art spaces, operated by the nonprofit MAK Center for Art and Architecture. Currently, the edifice is hosting a series of installations, titled Resynthesizers, by the German artist and composer Florian Hecker, well known for his work in computer music and for his explorations into cognitive neuroscience and psychoacoustic phenomena. Organized by the LA curatorial nonprofit Equitable Vitrines, Hecker’s ambitious show centers on hundreds of thousands of segments of computer-generated sound files structured with the help of a sound-texture-synthesis algorithm developed by Alex Roebel and his team at IRCAM, the French institute dedicated to sound and music research; and then organized by a sound-spatialization design devised by Alberto de Campo, a generative-art professor. But there’s poetry, as well—small signs, placed sideways, flash texts created by the British philosopher Robin Mackay; and then there are the scents, designed in collaboration with perfumer Marc vom Ende and chemist Philip Kraft. Hecker was inspired in part by Jean-François Lyotard, who wrote about Southern California and conceived the landmark 1985 Centre Pompidou exhibition Les Immatériaux with Thierry Chaput, which included, among many things, computers and other machines, music and music videos, and olfactory sites where various aromas, natural and man-made, were emitted. 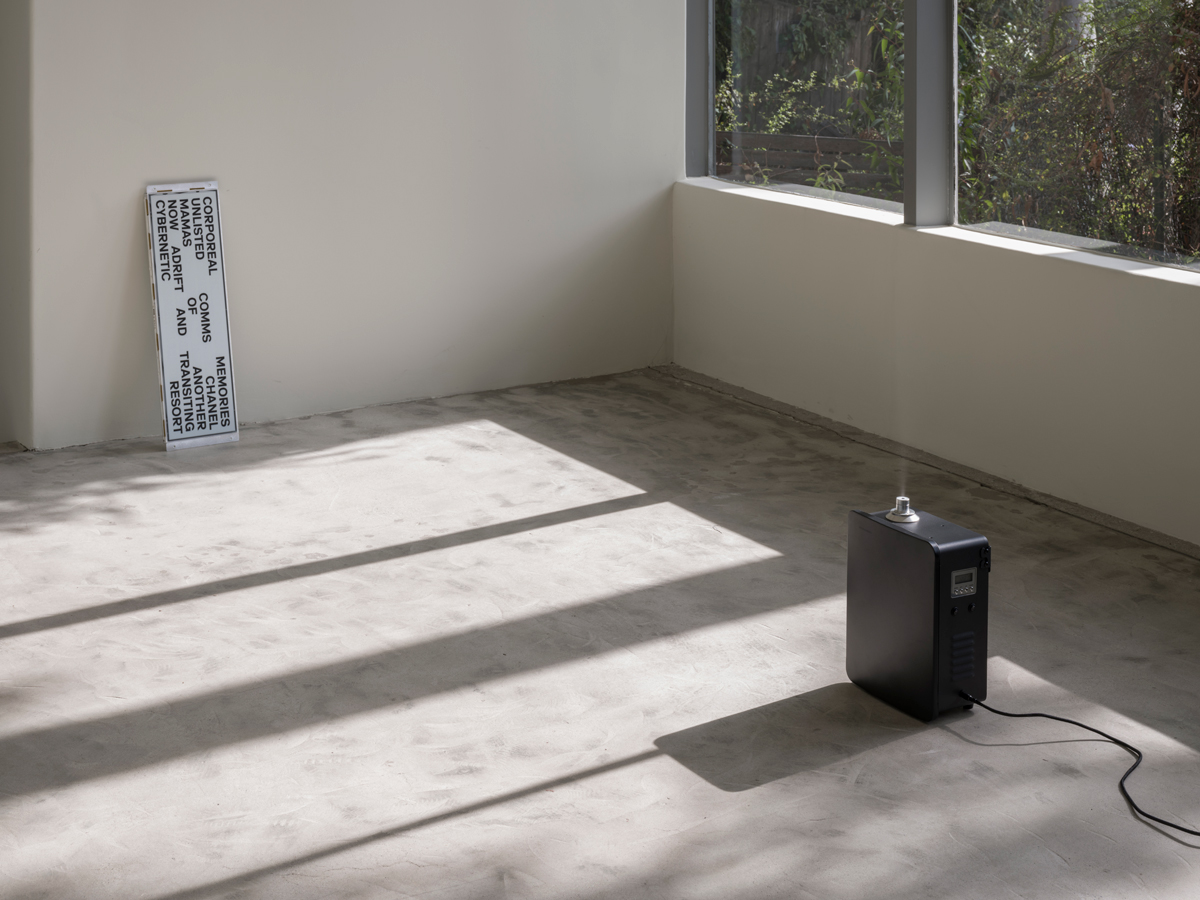 In Resynthesizers, diminutive diffusers fill three different areas with a different bespoke synthetic perfume concoction. Upon entering the first floor, you are hit with a whiff of a saline, mineral bouquet shot through with vanilla. (Though it can be hard to appreciate the nuances of the scent while wearing a mask.)

Small e-ink displays propped up sideways against the wall show text, which is set in a typeface reminiscent of the sans-serif style used in highway signs. They constantly shift, displaying new combinations of words, many of them referencing computation and acoustics. “TIMBRAL EXTRAPOLATION EXTENDED SPECTRAL TERRAIN COMPONENT ARTIFICE,” one display reads, before shifting to “EXTENDED SPECTRAL TERRAIN COMPONENT ARTIFICE CONTINUOUS TEMPLEXTURE EVENTLESS DYNAMISM SCANNED FOR SALIENCIES.” Every minute or so, the words change again, with lines that seem scientific, or sometimes have a disturbing edge (“ABANDON SYNOPTIC AMBITION WRITE WITH SLOGANS A LITERAL CAR CRASH READING AN EYE THAT LISTENS,” as the next configuration announces). 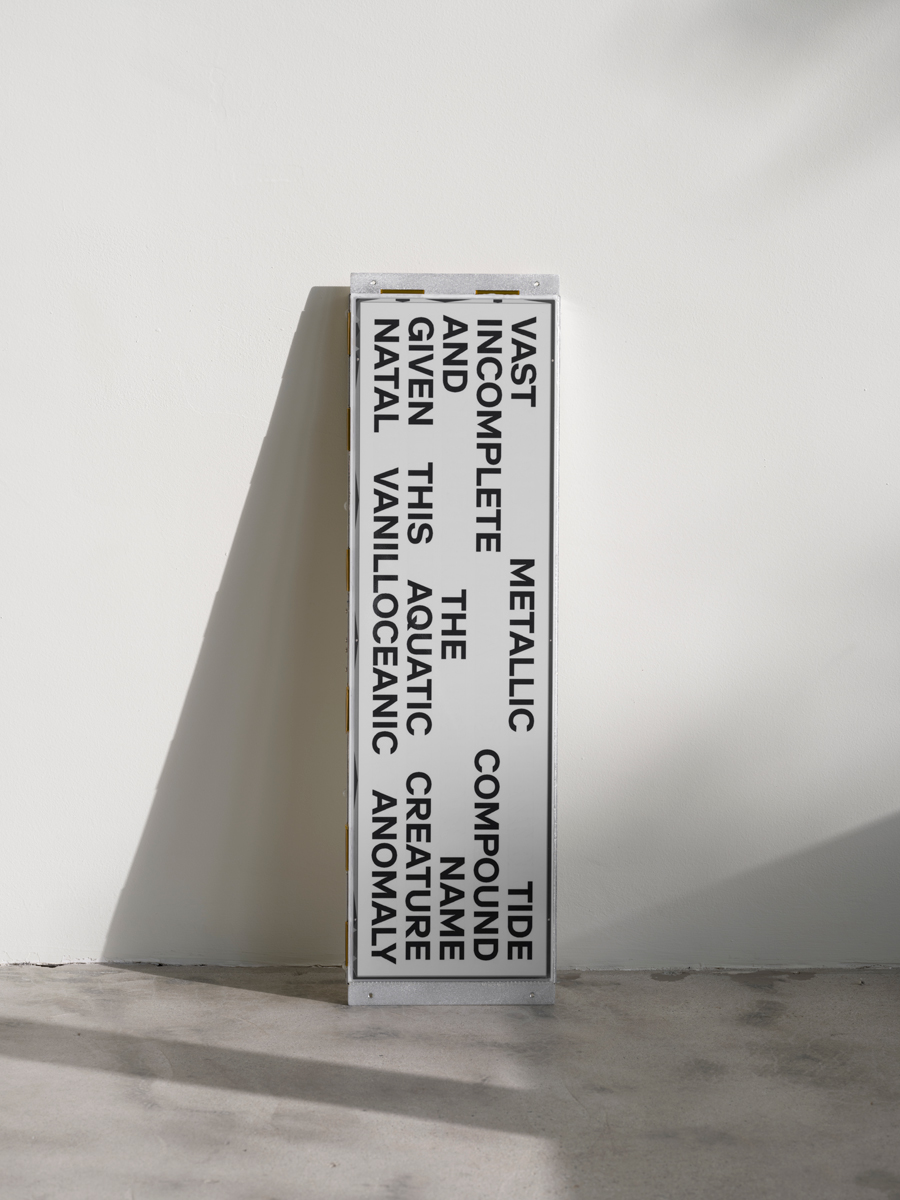 The sound dominates. In many of Hecker’s earlier installations in museums and galleries, small speakers would dangle from the ceiling like delicate tendrils, but more recently, he has begun working with floor-based installations of line-array speakers. Resynthesizers continues in that vein: here, large, cumbersome speaker stacks take command, placed squarely in the center of each room. You are acutely aware of the sound because you see it, too, as you walk gingerly around the heavy stacks with their thick wires. 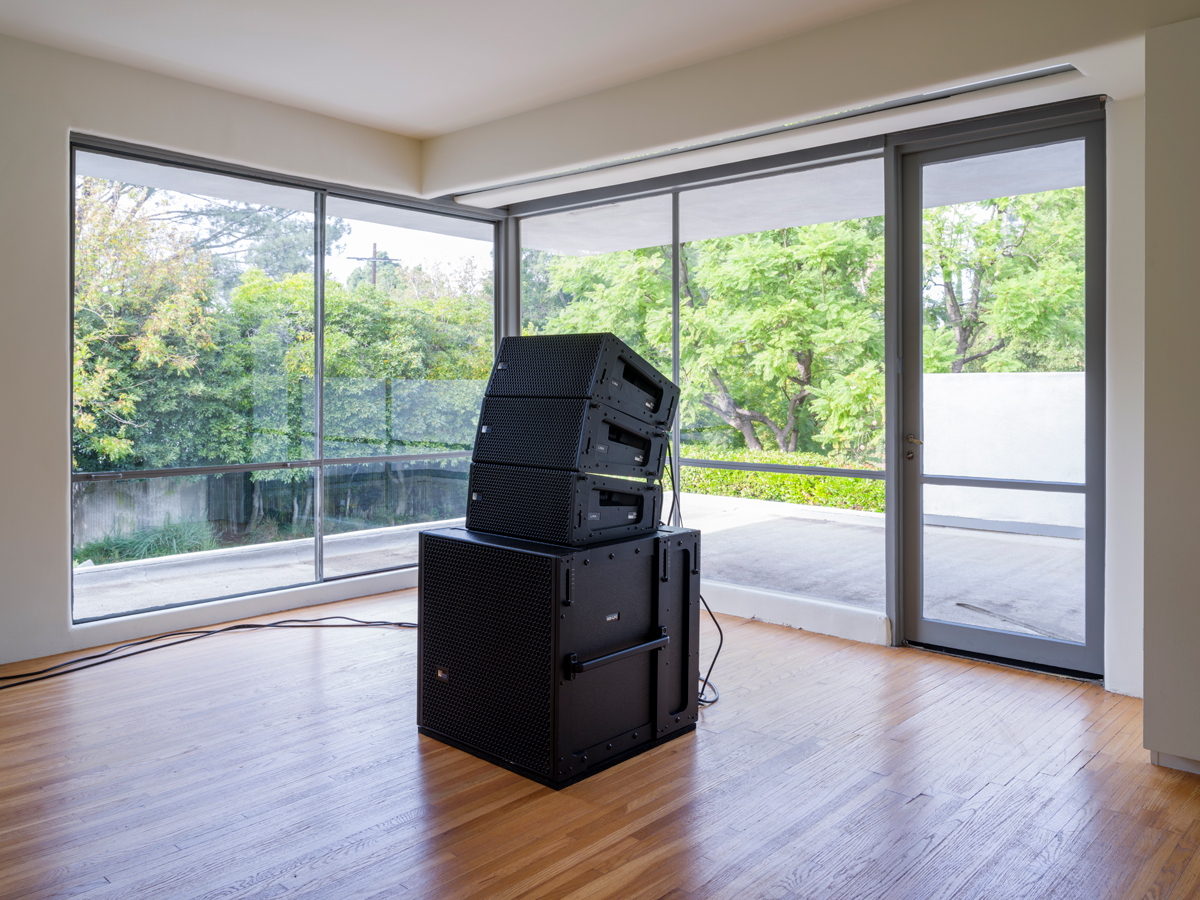 The perfumes were constructed at the molecular level, and so too, it seems, was the sound. You hear brief snippets that don’t recur, lending everything an evanescent, momentary sense of being. At one point, on the top level, I listened to hard-edged sharpness, akin to breaking glass. In a room below, down a flight of stairs, I encountered bits of electrical drones, reminiscent of refrigerators and heavy equipment, the steely clang of metal hitting metal. This isn’t easy-listening music, to be sure; the computer-manufactured sonic material brushes up interestingly against the rapturous views of nature outside. In a dreamy space like this in Los Angeles—particularly in Laurel Canyon, a signpost of the 1960s and 1970s hippie counterculture—you might expect melodic acoustic music, yoga, and maybe some essential oils. Hecker manifests the stark opposite. In an interview with Neural in 2014, he commented that listenability was not a goal of his, saying “the more alienating the better. What I want to do is to bring in non-linear functions into my works. And my primary concerns here are the complexified timbral structures they create. Not in order to make it more accessible but simply to intensify the experience.” 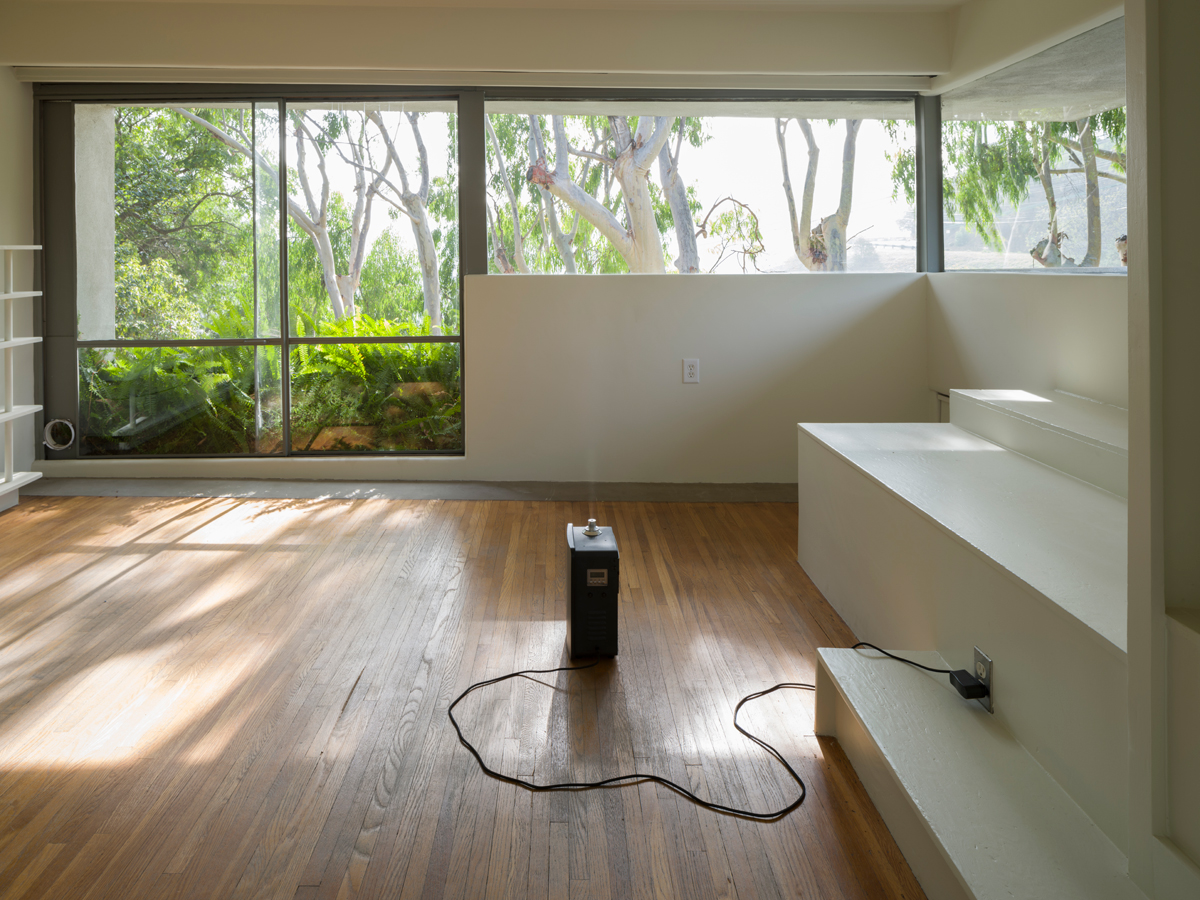 The serrated edges of the sounds often seem to match the crisp, bracing scents. Though my ability to smell was still muted after recovering from COVID, I could perceive fragrances that felt piercingly artificial and yet deeply familiar. Inside Schindler’s airy layer cake of light, space, and nature, Hecker’s acutely synthetic work generates a heightened contrast—not only in the timbres and tonalities, but in the smells, text, and the powerful visual presence of the speakers, which function like hulking sculptures. Against the placid backdrop of lush vegetation outside, we contemplate our vast technological reality.