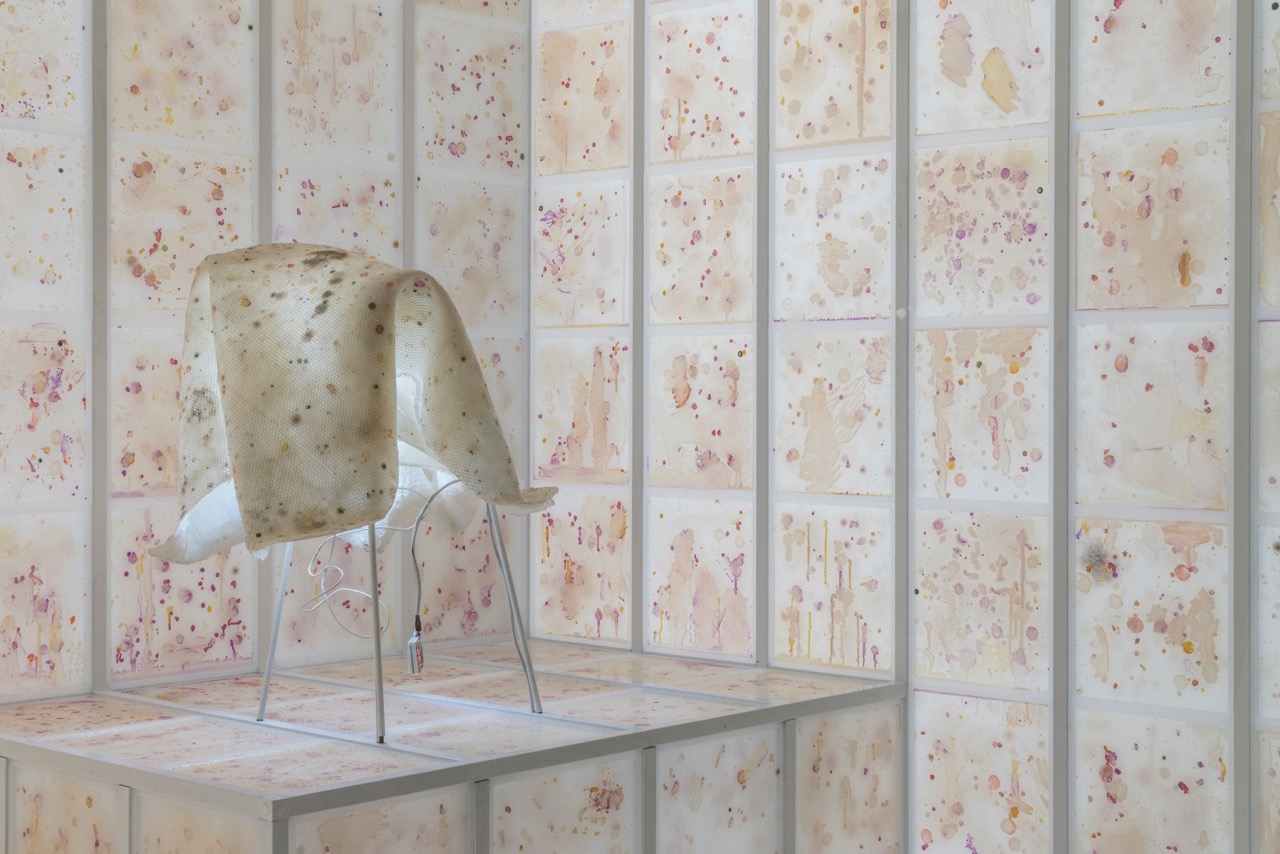 “My genius is in my nostrils,” once wrote Friedrich Nietzsche, boldly challenging the classical hierarchy of the senses that had long considered vision, hearing, and touch as superior to the supposedly baser senses of smell and taste. In doing so, the German thinker was not being merely contrary. He was borrowing the insights and vocabulary of nineteenth-century experimental medicine—he described himself as a “physiologist” of culture—to push back against centuries of Christian denigration of the body and its place in the world.

For Anicka Yi, we have yet to learn this. The first of three works on view at the Guggenheim Museum as part of her 2016 Hugo Boss Prize exhibition, Life Is Cheap, is Immigrant Caucus (2017), an installation composed of three small cans—the industrial-style metal ones that exterminators carry—sitting beside a metal-cage doorway silently spraying a chemical compound into the air. Yi worked with a team of scientists at Columbia University to chemically derive this compound and its aroma from the sweat of Asian American women and the emissions of carpenter ants. 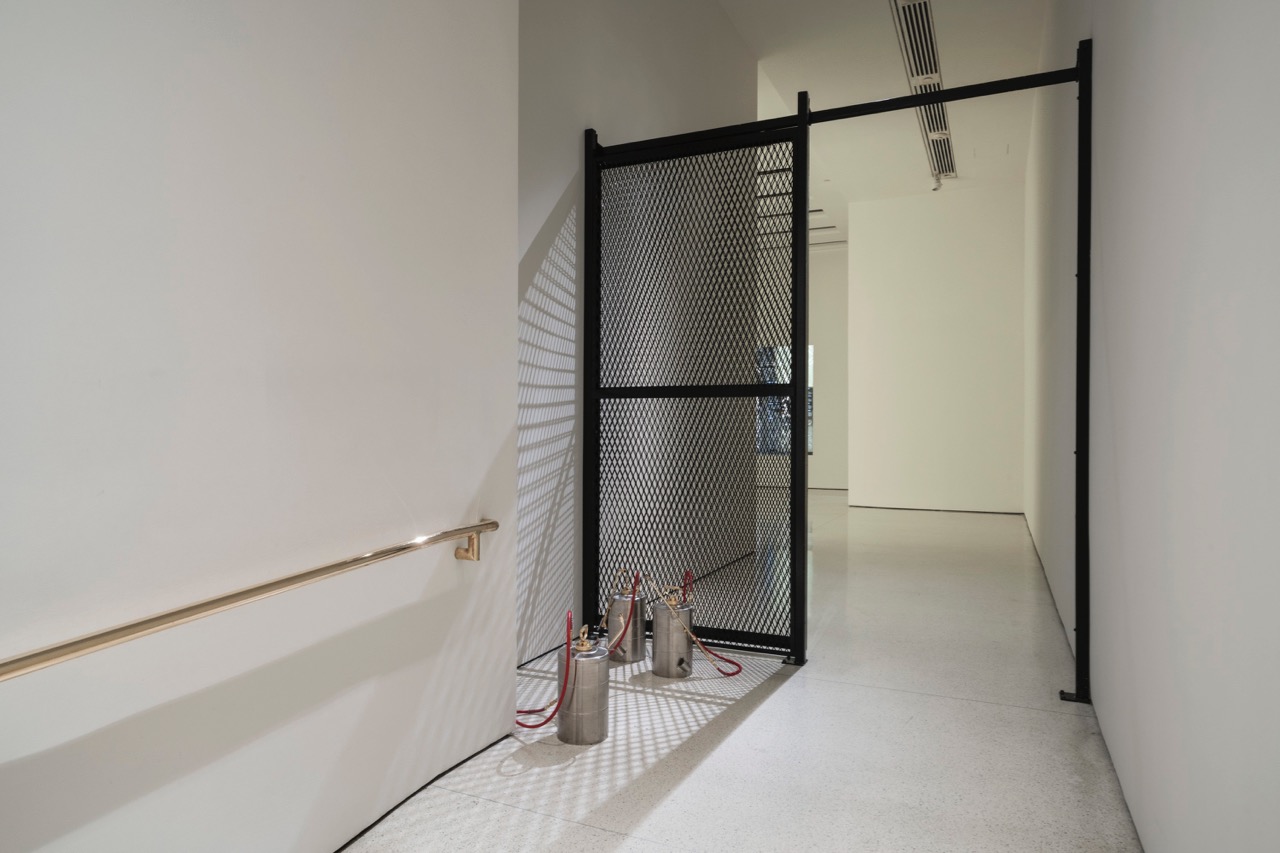 This pairing confronts viewers with stereotypical ideas about Asian immigrants as hard-working but lacking in individuality. Moreover, in approaching the work, it’s easy to be overtaken by an instinctive fear that one is exposing oneself to something toxic—those exterminator cans!—even though you know full well that this is an artwork and probably not there to poison you. The musty, hard-to-put-your-finger-on odor—or air—that permeates your head remains vague, and this state of not knowing is unnerving. What is it that you’ve breathed so deeply into your lungs? Whatever it is, it neither seduces nor repulses; it is neither pleasant nor unpleasant. Yet it is present, simultaneously a promise and a threat, one that now lives inside you.

Yi has a nose, one might say, for the larger stories carried by wafting odors that do not respect the boundaries we establish for ourselves and our bodies. Immigrant Caucus, the title suggests, underscores how fear and fantasy overtake us when we are confronted by immigrants, for instance, who not only look but also smell different. The reflexive, visceral reactions Yi seeks to provoke are comparable to the irrational reactions that have greeted Asian immigrants, African Americans, women, and so many others, and that are today playing an outsized role in American politics and around the world.

Over the last decade, Yi has come to be highly regarded for her work combining fragrances, biological matter, bacteria, and living organisms in elaborate installations that are, in her own words, “smelly, impermanent, microbial.” These often tap into modern anxieties about hygiene, contamination, and the vulnerability of our bodies to an unruly natural order that modern science, for all its prowess, is unable to fully tame. She often situates her work at the border of feminism, the politics of identity, and chemistry. For her 2015 project You Can Call Me F, Yi gathered live biological samples from a hundred women from the art world to create a single hybrid feminist bacteria, and examine how notions of personal and political agency intersect with ideas of social and scientific power.

Yet Yi is no olfactory purist. Her work often displays a visual beauty and intensity that belies its challenge to the primacy of vision. In the main area of a side gallery, past the wafting mist of Immigrant Caucus, she has installed two large-scale dioramas, Force Majeure and Lifestyle Wars (2017), that explicitly address themselves to our eyes. These face each other magisterially across the room. Each is a climate-controlled environment sealed behind Plexiglas, like the dioramas of a natural history museum, an inaccessible, three-dimensional tableau that demands cold contemplation rather than immersive participation. 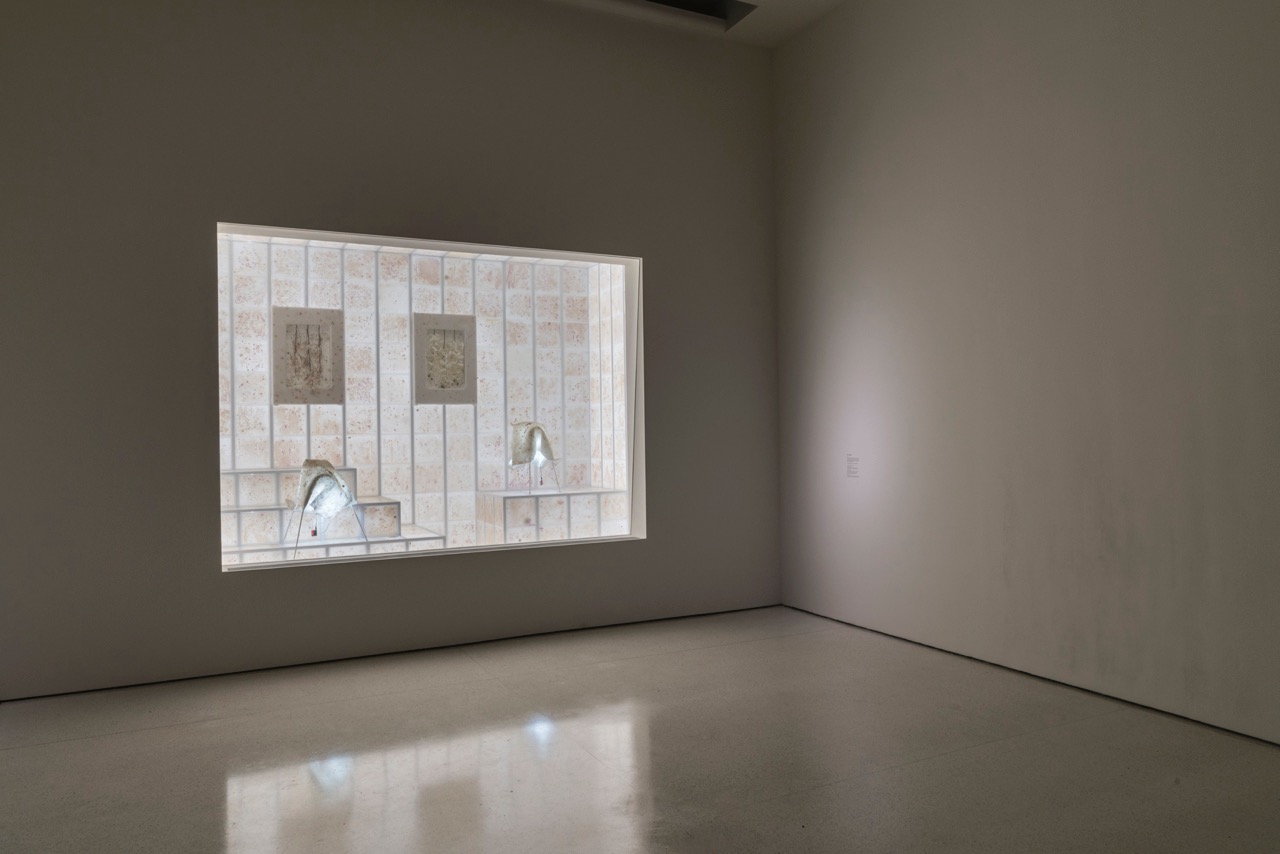 The first is lined with tiles of agar, a seaweed-based substance used for culturing bacteria, arranged in a grid pattern that invokes many a modernist painting. Over the course of the exhibition, however, these tiles have progressively become spotted and dappled with colorful, richly variegated blooms of bacteria, reminding us that the presumably timeless geometries of twentieth-century modernisms are, like everything else, subject to time, ruin, and decay. To underline the point, on two stools draped with agar, Yi has attached digital clocks that serve as figures of time. 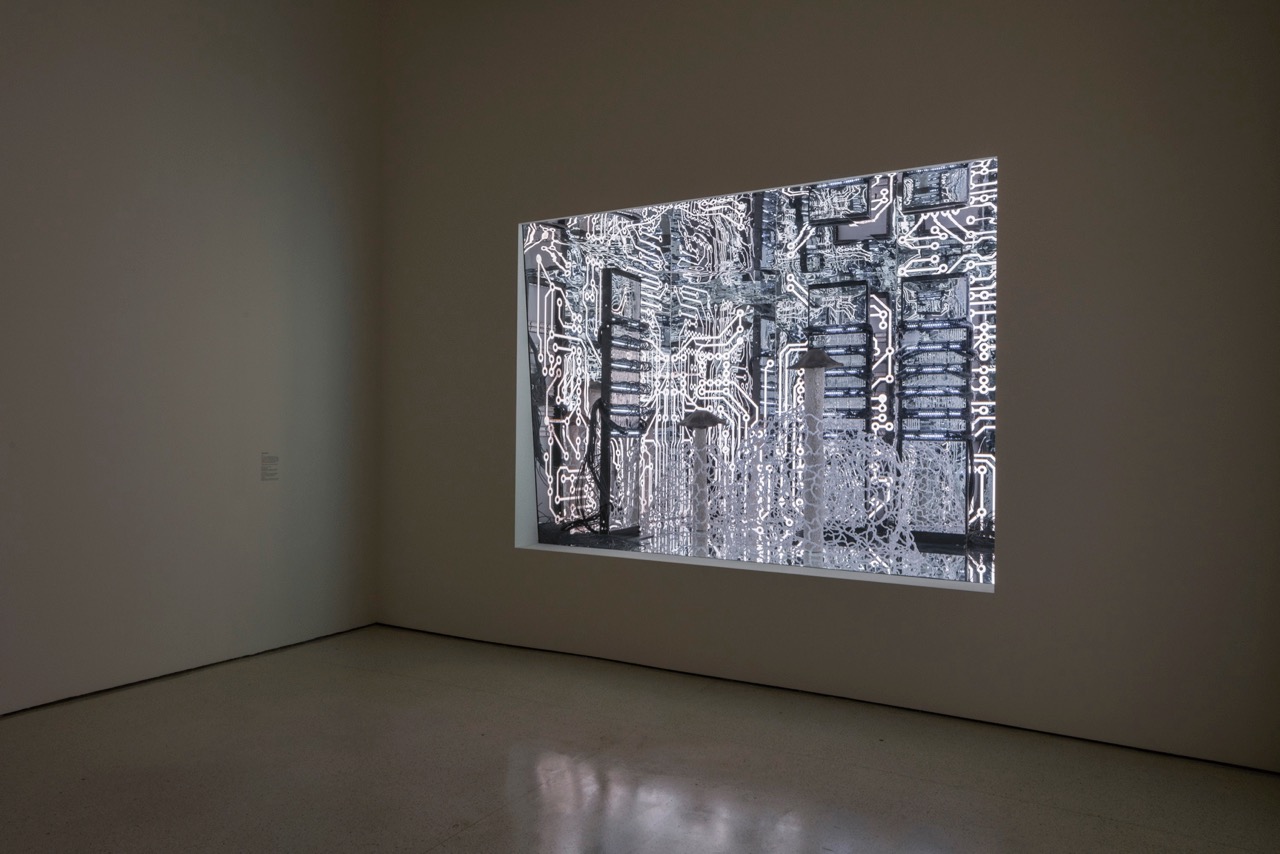 Directly opposite, Lifestyle Wars presents an elaborately mirrored installation that combines an ant colony and racks of computer servers. Ant tunnels, Ethernet wires, and seemingly organic tubular structures emerge and disappear from computers, walls, and a column Yi has placed in the center, to create a dense thicket of connections and passageways in a palette of green and white that looks simultaneously organic and artificial. Viewers are able to watch ants move from chamber to chamber, and observe how their tunnels resemble digital pathways, suggesting that they are like data packets moving through an information system.

After so pointedly bringing our attention to our sense of smell in Immigrant Caucus, Yi deprives us of the ability to catch a whiff of the bacteria-rich environments in these dioramas. In doing so, she heightens, through absence, our physical awareness of the natural processes that are, in fact, everywhere around us. She also invites us to contemplate the uncanny resemblance, at least at a certain chemical level, between nature and culture, biology and technology. Of course, blurring the line between the organic and the artificial has long been a commonplace of science fiction, but Yi discards the terms of epic struggle in which this usually occurs. She offers neither a heroic nor a demonic vision of the melding of human and machine. Instead, she confronts us with the ways their overlap and doubling shape our lived social and political realities, and encourages us to recognize that, as embodied beings, we are always divided between the surface views available to the eye and the voluptuous life of the nose.

Saul Anton has written for Artforum, frieze, Afterall, and many other publications. He is formerly senior editor of BOMB, and teaches at the Pratt Institute. He is the author of Lee Friedlander’s Little Screens (2015) and Warhol’s Dream (2007).