Visual Art
Before Yesterday We Could Fly

A period room at the Met imagines a speculative black utopia. 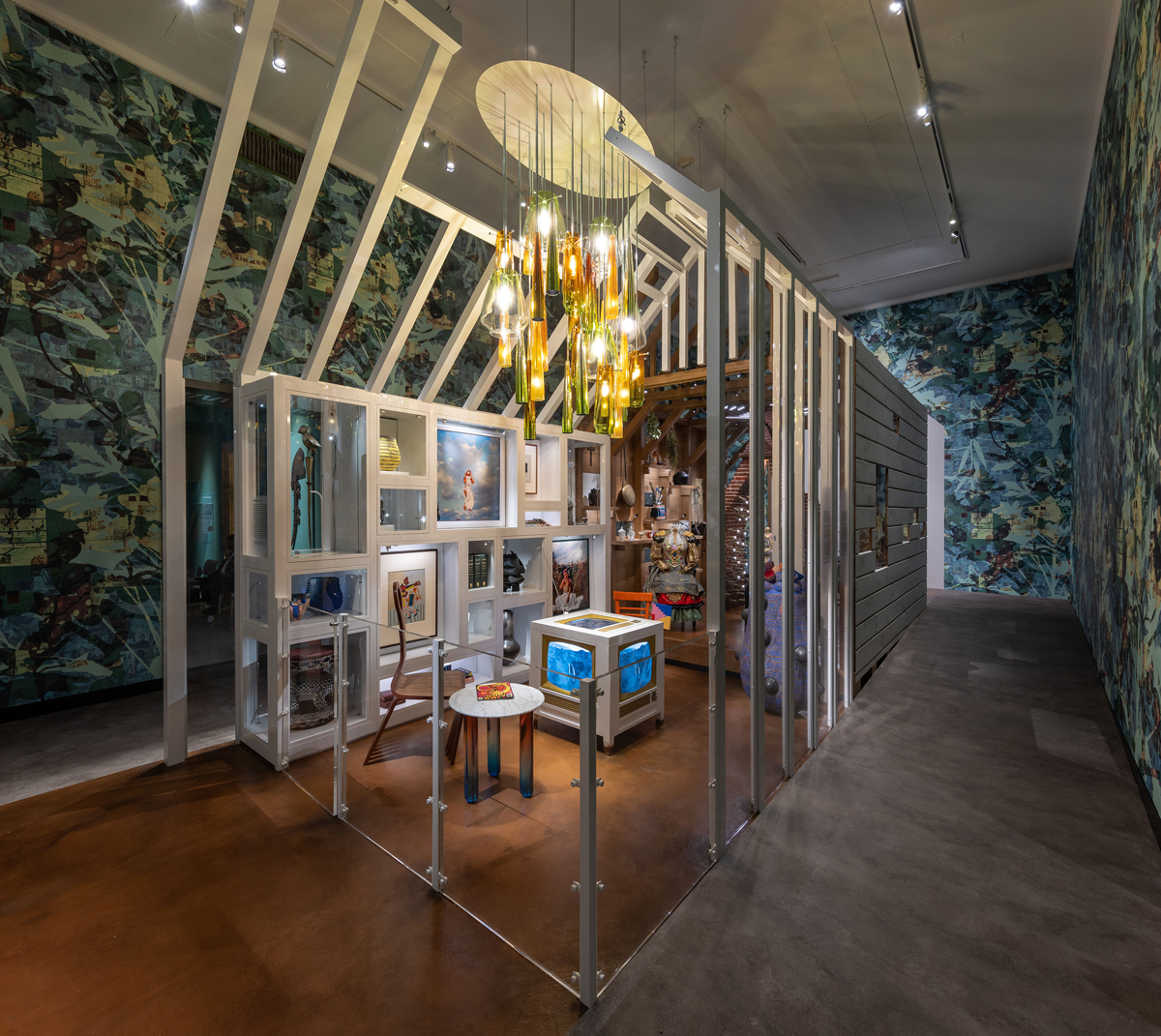 Before Yesterday We Could Fly: An Afrofuturist Period Room is a house-within-a-room located just off the Metropolitan Museum of Art’s Medieval hall. There are more than forty other period rooms on display at the Met, all of them immersive spaces that one can step into or stand on the threshold of. In contrast, viewers surround Before Yesterday, experiencing it by circling a narrow perimeter corridor, peering into the freestanding house through cutouts in its façade. Design objects, home furnishings, books, herbs, and artworks fill its deconstructed interior.

Hollywood production designer Hannah Beachler led the curatorial team. Their conceit imagines that the space is “a speculative future home” for the former residents of Seneca Village, the black (and Irish) enclave once located near the Met, but which was evicted in the 1850s to make way for Central Park. There is an abundance of fascinating things to look at. Items chosen from the museum’s historical collections nestle among newly acquired and commissioned work. Five-hundred-year old Venetian glassware shares a shelf with Roberto Lugo’s Grafitti Cup 5 (2021). A nineteenth-century comb sees its form echoed in Jomo Tariku’s Mido Chair (2021), made from walnut wood shaped as a hair pick. These visual rhymes interact with the dissected house’s many viewing angles to promote dynamic looking. But the overcrowded display makes it hard to experience any object on its own terms. Several items can barely be seen at all. 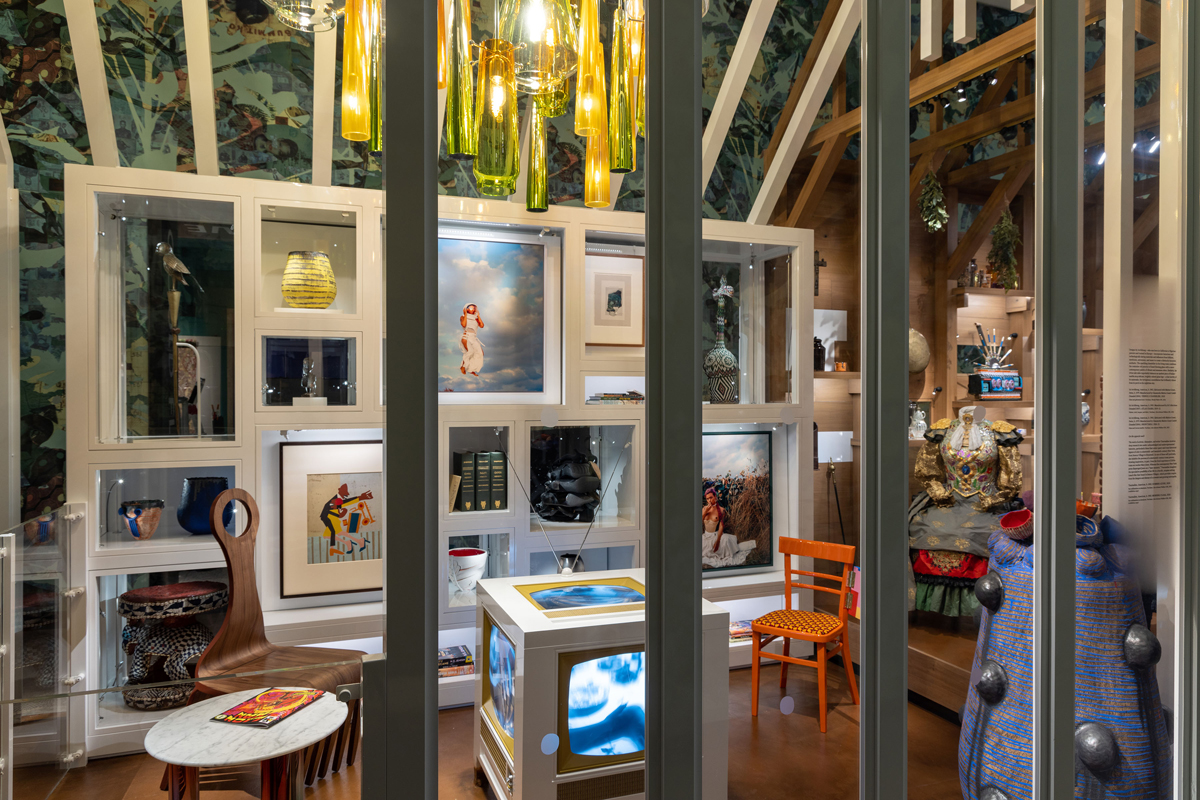 Tourmaline’s Summer Azure (2020), a self-portrait as a white-robed astronaut/saint floating in a perfect sky, might be in trans-historical dialogue with representations of Mary Magdalene (whose tooth is enshrined in a nearby reliquary back in the main Medieval hall), but due to its placement on the room’s far wall, the viewer cannot get close enough to see anything but broad figure outlines. A small, delicate 2018 collage from Lorna Simpson’s Earth & Sky series, hung to the right of Summer Azure, fares even worse—it has become an indistinguishable blur. The exhibition layout denies us the intimacy and up-close appreciation that these works deserve. With more than two million square feet in the Met, one can’t help but speculate why Before Yesterday was confined to such a reduced footprint for a run of at least two years, with obstructed versus immersive access to the room. We’re asked to glimpse, not to linger. The artworks’ detailed particularities lie at a forced remove, downplaying the artists’ formal decisions as a locus of meaning-making.

On the other hand, by suggesting that these objects are meant to be looked at as a group, the curatorial premise flouts the convention of contemplating artworks individually. In this sense, Before Yesterday functions more like an art installation where the organizing idea determines the space’s significance as a totality. 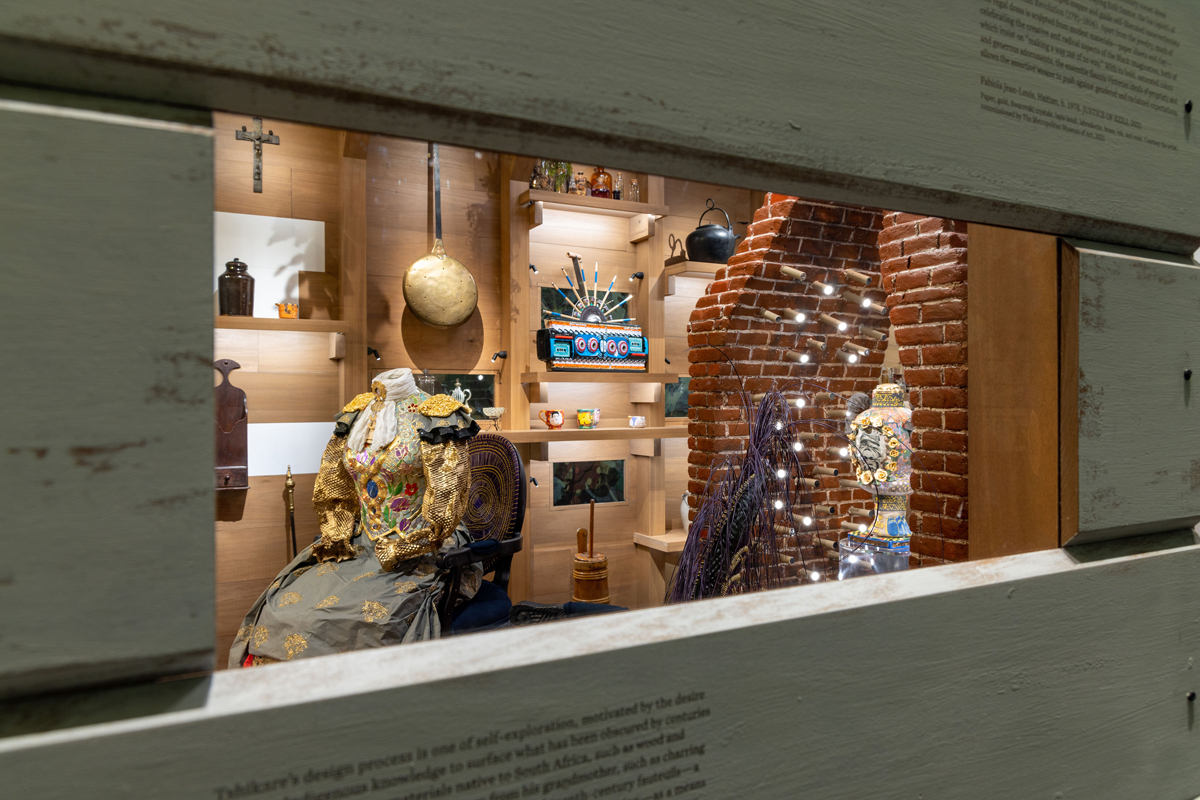 Wall text refines the scenario: “The imagined residents of this home used their knowledge of technology, science, and magic to develop a means of time travel, which has allowed them to gather works of art from across time and space.” People living in the social, economic, and geographic outskirts of the city unlock the secret of time travel then use this enormous power to . . . collect art? That said, collecting and selling go hand-in-hand. While we are told this is an imagined collection, the exhibition design actually resembles a (closed) gift shop. The Martin Luther King ashtray, Beyoncé plate, Frederick Douglass cup, and twenty other ceramic objects emblazoned with pop icon line drawings by Lugo cement this impression. 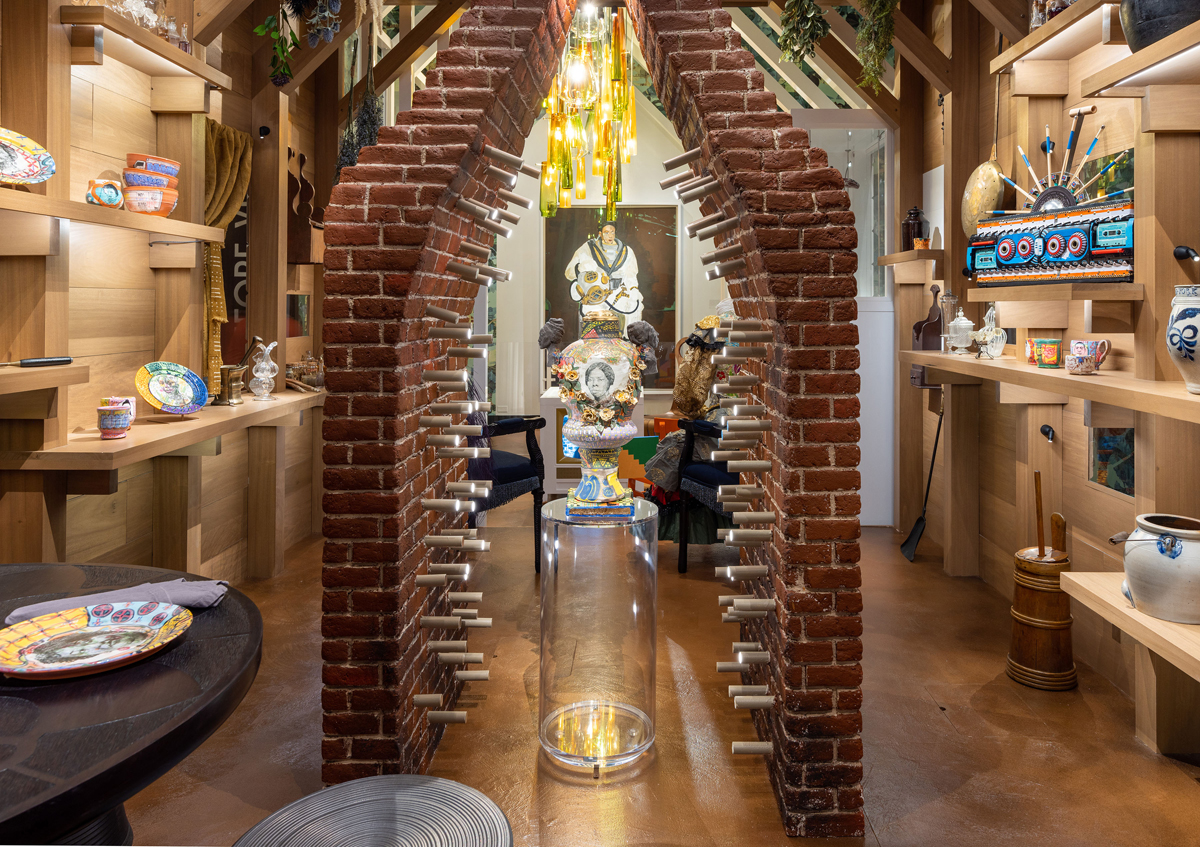 Representations of blackness must grapple with the fact that it is easier to depict presence (however fictional) than absence; it is easier to plot a revisionist historiography than to outline the long history of black dispossession. Toni Morrison’s Beloved excavates this problematic, starting with her dedication: Sixty Million and More. At the same time, speculation is necessary. The more hostile the world, the more urgent the ability to dream it otherwise. (Nicky Drayden’s recent Escaping Exodus novel series uses expansive world-building—spacefaring brown people whose vividly rendered existence happens inside moon-size creatures—to explore all-too-earthly class/sex/gender inequalities.) And enlivening vital yet un(der)written histories helps us to reframe the present with an eye toward future action. The risk in this case, though, is that celebrating an atemporal utopia based on an irretrievable past makes it harder to focus on how we got here—i.e., the forces that continue to disenfranchise black people, and who owns what the displaced must forsake—which in turn makes it harder to articulate how we might leave. Speculative blacks don’t talk back.

Just a few blocks away from Seneca Village lay San Juan Hill—a working-class black and Puerto Rican neighborhood that was destroyed by eminent domain, like Seneca, to cede space for Lincoln Center in the 1950s. We could know, if we wanted to, what happened to those people (Thelonious Monk grew up there), many of whom are still alive. 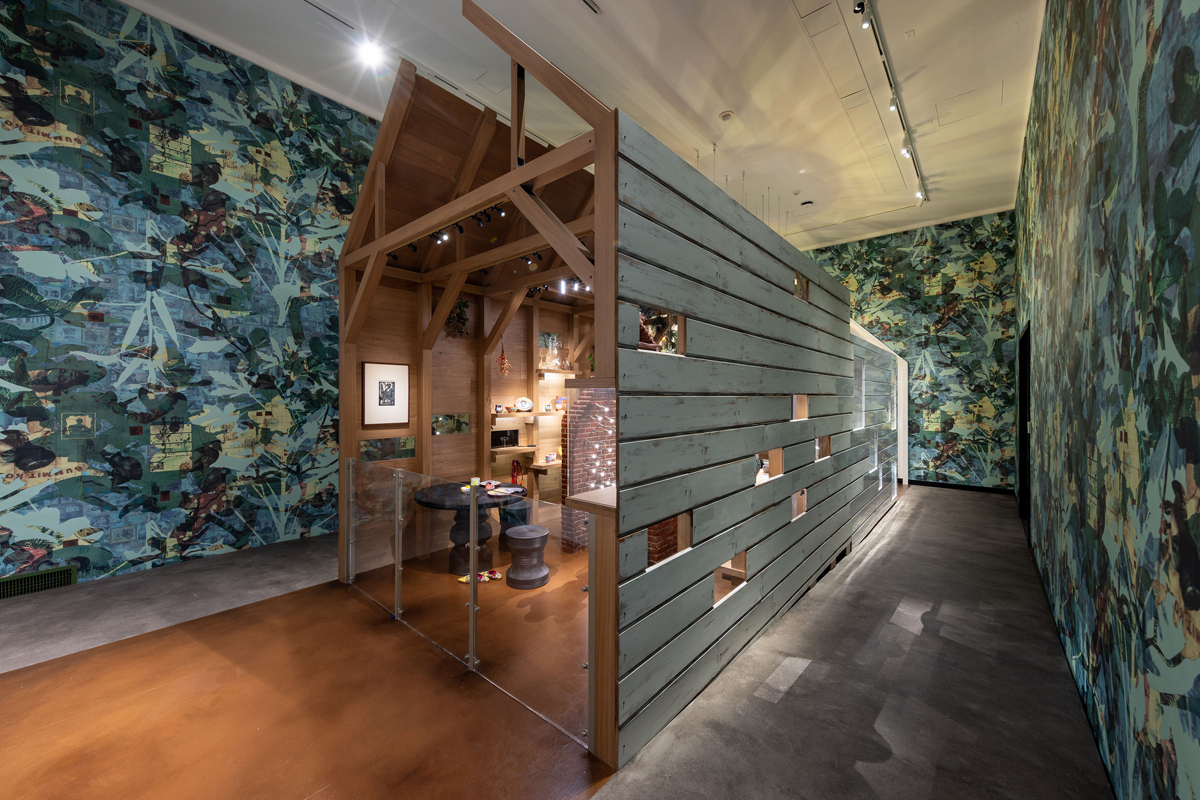 Before Yesterday’s press release defines “Afrofuturism” as an “interdisciplinary artistic mode that arose in the middle of the 20th century and centers Black imagination and self-determination.” The Met’s unorthodox description accurately describes the Black Arts Movement, not Afrofuturism, which was coined by white critic Mark Dery in 1993. In an interview a few years later Greg Tate summarized what are widely understood to be Afrofuturism’s salient features: “The form itself . . . focuses on someone who is at odds with the apparatus of power in society and whose profound experience is one of cultural dislocation, alienation and estrangement . . . and that pretty much sums up the mass experiences of black people in the post-slavery twentieth century.” 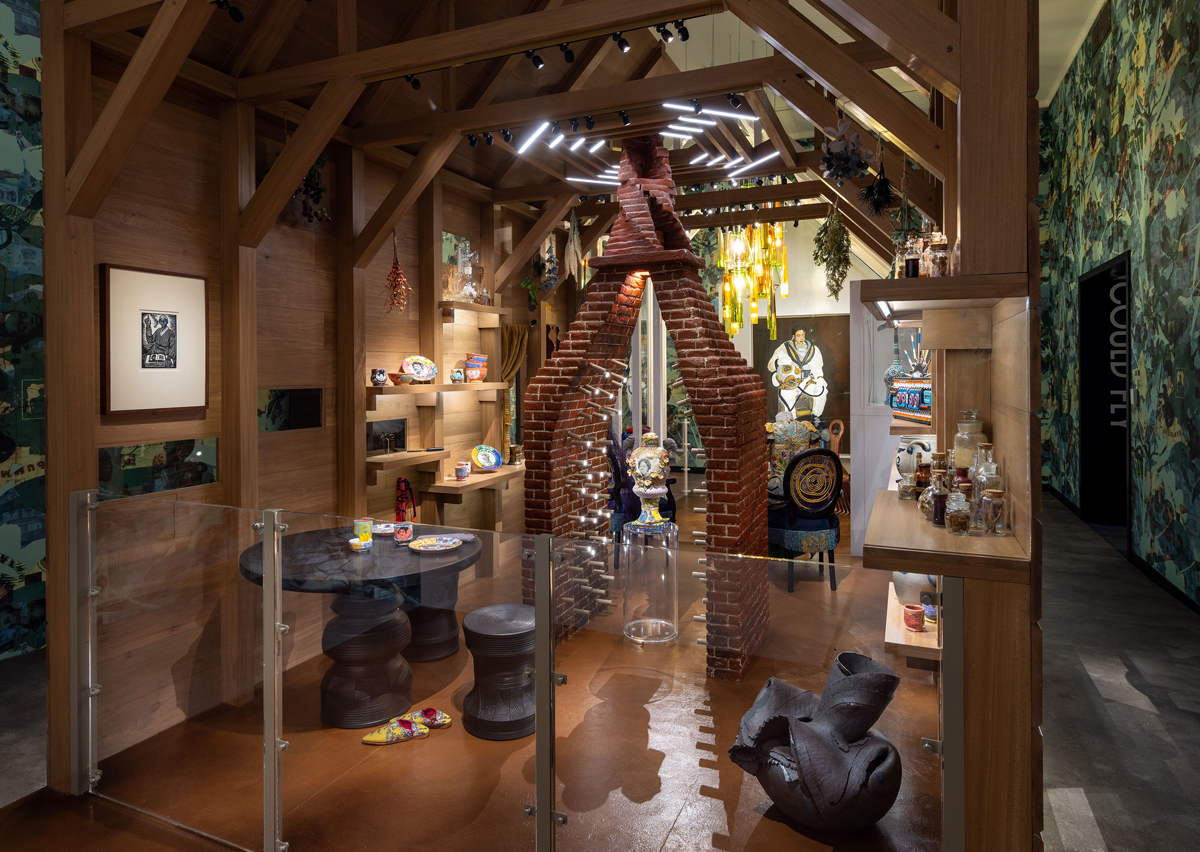 If dislocation and abject estrangement power Afrofuturism, then the heart of this show might be a dark stylish wreck in the kitchen corner. Andile Dyalvane’s ceramic vase Umwonyo (2019) lies on the floor in a crumpled heap. It has clearly been shaped, or deformed, by elemental forces, but we cannot tell in what stage of the becoming–becoming undone cycle Umwonyo has congealed. By upending linear causality it humbly subtracts the distinction between creation and destruction. In a cluttered room it evokes silence. As one of the few items in Before Yesterday neither placed inside a custom-fit box nor situated in such close proximity to another object as to imply crosstalk, Umwonyo suggests to me not autonomy but loneliness, and how the ability to act unguarded can only be accompanied by rare loves or certain kinds of neglect. Perhaps the people who lived in Seneca Village, to the north of what was then a bone-boiling works and which nowadays includes Diana Ross Playground, would see this most elegant of non-accidents and think the same. But most likely they’d assume that shit was broken.

Jace Clayton is an artist and writer based in New York, also known for his work as DJ /rupture. He is the author of Uproot: Travels in 21st Century Music and Digital Culture (Farrar, Straus and Giroux) and was awarded a 2020 Andy Warhol Foundation Art Writers Grant to support Behold the Monkey, his upcoming book on contemporary art, faith, and social media. Clayton is currently Assistant Professor of Visual Arts at Columbia University and Interim Director of the Sound Art Program.