An artist engages the eyes, the ears, and the ass in her dynamic
sound installation. 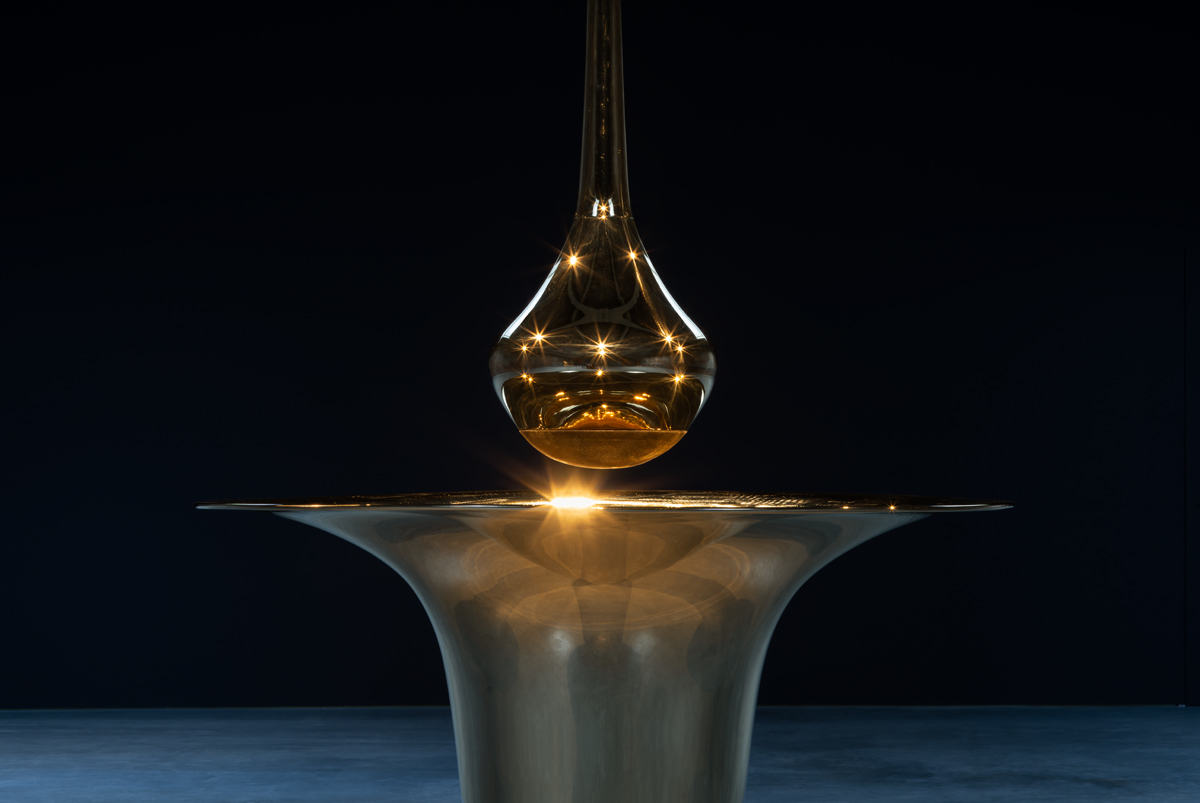 A few years after editing Description de l’Égypte for his longtime employer Napoleon, French Egyptologist, administrator, and mathematician Joseph Fourier thought intensely about heat. His resulting book, The Analytical Theory of Heat, laid the foundation for a stunningly useful cluster of algorithms that came to be known as Fourier transforms. MP3s, streaming video, the endlessly expanding post-Gutenberg galaxy of digital media? It all runs on Fourier transforms, which can break down complex signals—any signal, mind you—into sine waves. As applied mathematics, sine waves can and do describe our material reality. As audible oscillations, they constitute the form of sound wave most able to make things in the world—subwoofers, buildings, air . . . —vibrate alongside them. Pop music leverages this: sine waves power the Roland 808 drum machine’s iconic low-end boom, not to mention the high-pitched squeals of microphone feedback, whose unchecked exponential growth can quickly damage hearing or sound equipment.

Gently restrained microphone feedback fills the first room of Camille Norment’s Plexus installation at Dia Chelsea. Extraneous sounds (such as the lobby door slamming) cause her drone to react with languid volume swells and subtle tonal shifts. The artist’s self-correcting system maintains homeostatic balance; sudden volume spikes or unwanted noises are impossible. Plexus articulates a sense of control, if not safety. Generative feedback systems such as this one plug outputs back into the inputs, upending any cause-effect hierarchy, and that nonlinearity emphasizes a sense of timelessness. 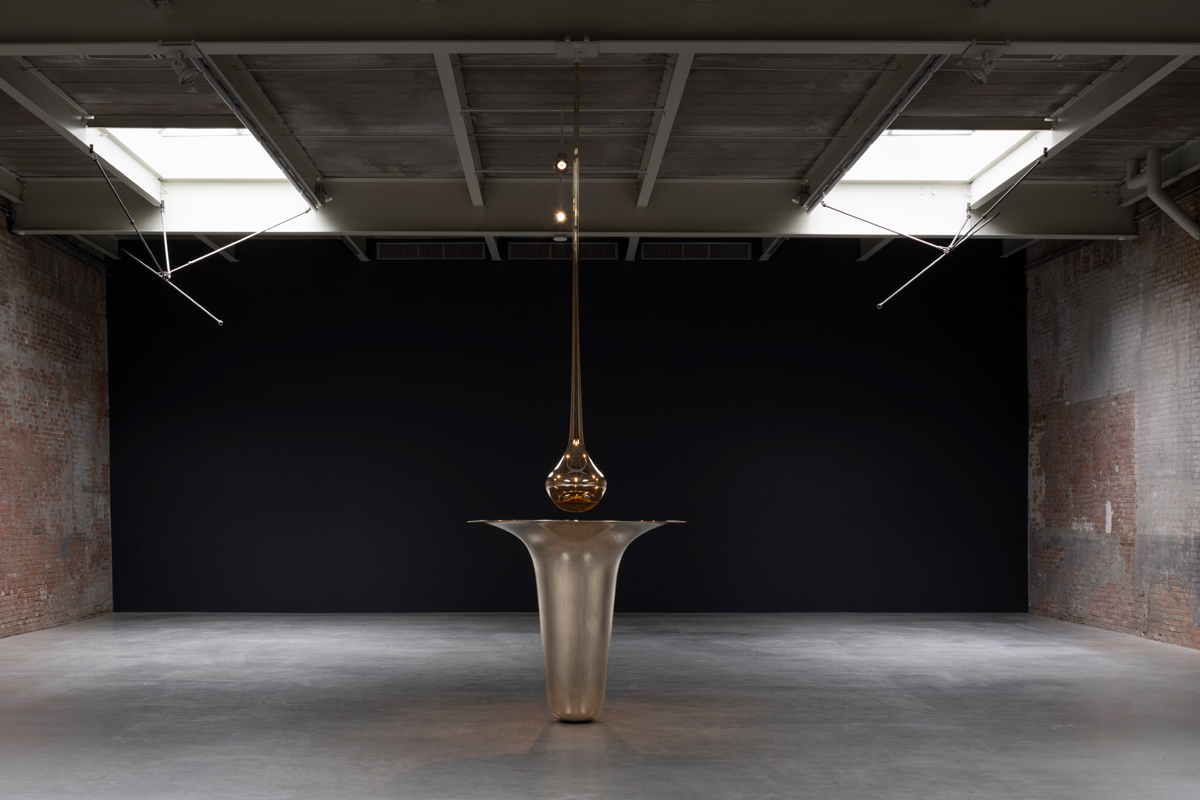 A five-foot-tall brass vessel occupies the center of the gallery. It resembles an oversized Eucharist chalice or an Olympian tuba horn. An amber-colored structure suspends from the ceiling above it like a viscous pour of honey, the drop-shape frozen just a few inches above the tuba/chalice’s flared mouth. The objects’ polished surfaces distill and redistribute the room’s reflected light. Four ceiling microphones point toward the sculpture, feeding the ambient sound back out into the speaker built inside the honey-drop. Plexus treats light waves and sound waves in the same way. The environment could be described as deeply monotheistic, with all attention focused on a single, radiant apparatus at its center, whose self-referentiality (feedback is machinery saying “I Am that I Am”) creates a unified sonic field further structuring the space. 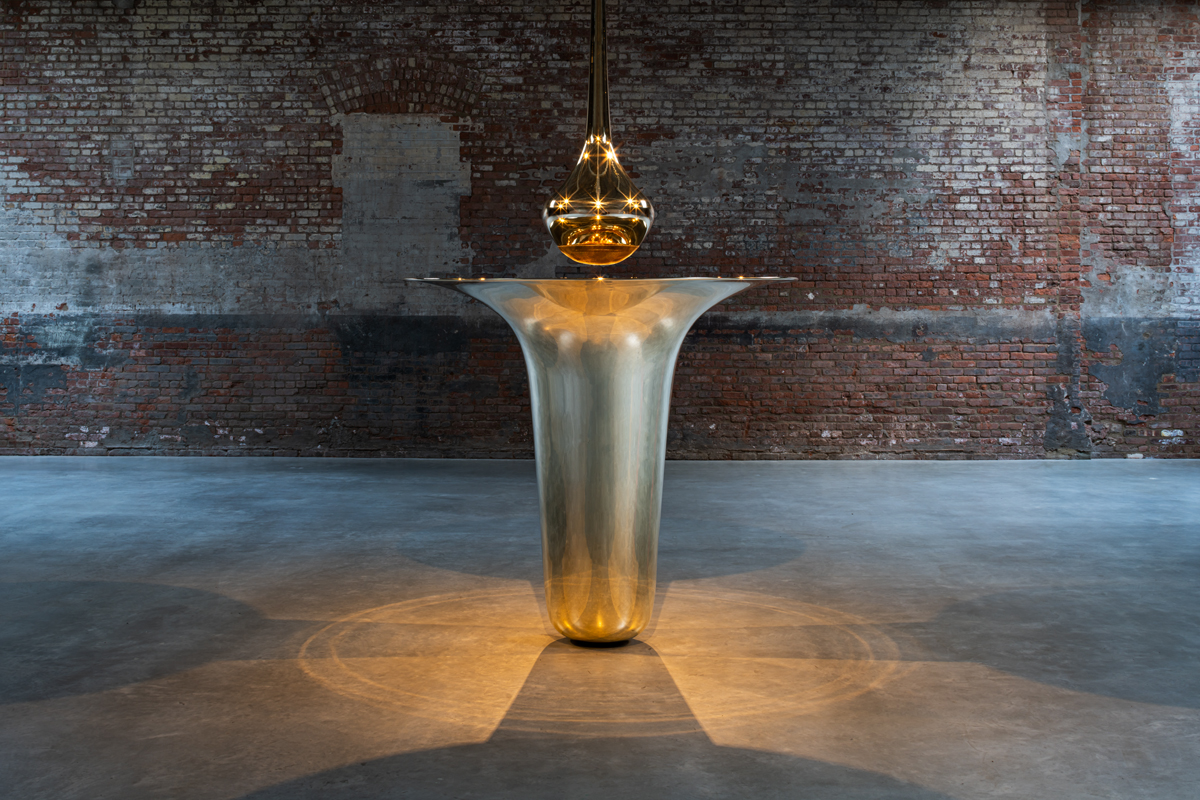 Exhibition text entreats us to perform small leaps of faith: “As the visitor nears the sculpture, spectral artifacts of static from radio recordings of social protests in the 1960s and ’70s become audible.” Even after leaning into the vessel for minutes on end, this visitor never managed to hear any white noise. Norment’s apocryphal static may remind us that contemporary belief systems are both encoded by and inseparable from telecommunications apparatuses, but to read that one may hear static excerpted from fifty-year-old “social protests” privileges a semiotic understanding of what’s happening. In an installation that distributes nonlinguistic sensation with such success, that feels unnecessary. The politics at work in Plexus are vibrational.

In the second room dozens of thick wooden beams branch across the walls and onto the floor, where they angle out to become benches. A half-dozen or so splintery, Y-shaped wooden forms leaning against the walls suggest broken crosses. Their formal interplay with the vaulted wooden roof brings up thoughts of how industrialization’s infrastructures and networks require standardization, while echoing a deconstructed Nordic spa.

The universal sine-wave drone from the previous gallery Babels out into a chorus of disembodied voices singing wordlessly. The feedback pitches filling that room as directionless sound continue in here, albeit now produced by each singer, corresponding to a discrete sound source. SPOILER ALERT—not only is the audio highly specific, it also gets pumped into the benches via hidden transducers. When you sit down, you feel an individual voice shaking your ass. Few artworks save the best for the butt. 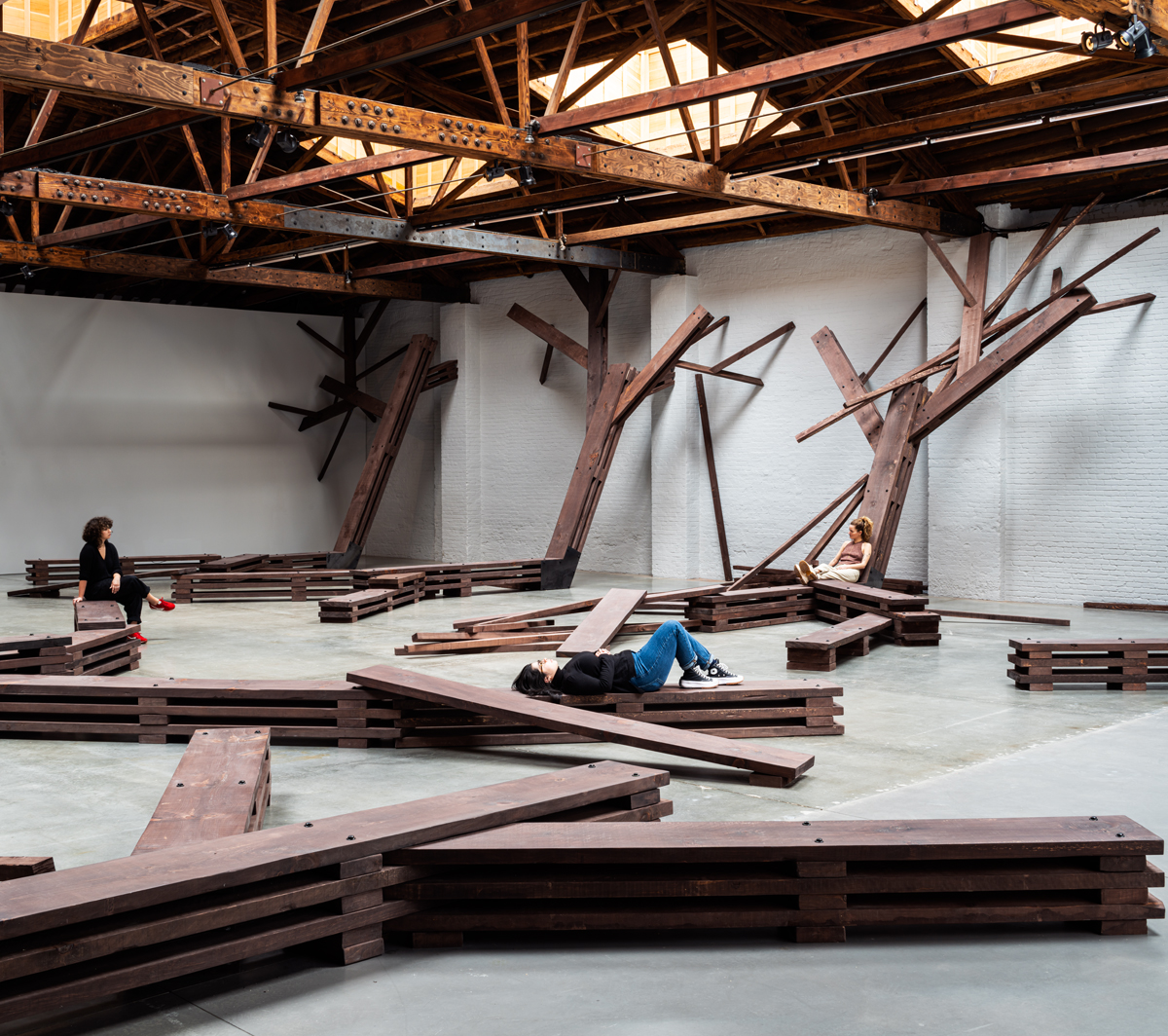 Software code randomizes the voices’ arrangement, and infrequently the machinic clatter of the choristers’ grinding teeth enters into the mix. Like the modulated feedback of the other space, the overall sound effects a kind of austere and meditative reserve. The incredible composure of Plexus’s composition—dynamism achieved with an absence of accidents—brings to mind composer-pianist Frederic Rzewski’s thoughts on improvised music. “In free improvisation this autonomy of the moment, in which things happen for no reason at all and lead nowhere, is fundamental,” he writes. “Improvisation describes a world in which things happen without cause, and without direction.”

One of the most enduring and reductive frames applied to black music is that it must be understood through the lens of freedom: the emancipatory power of free jazz, the social mores–flouting self-realization of soul singers, rap’s freedom-unto-disorder, and so on. Such framings subsume black audio under the DuBoisian question of How does it feel to be a problem? But what happens if sound isn’t mimetic and shouldn’t be considered as representative of anything at all? Freedom does not exist, despite its interpreters. Meanwhile bodily facts brought on by sound can only be felt—your senses vibrate at the other’s frequency, and we’ve got Fourier transforms to prove the equivalence. Artworks that encourage us to inhabit a shared rhythm offer an alternative to both abstraction and representation. 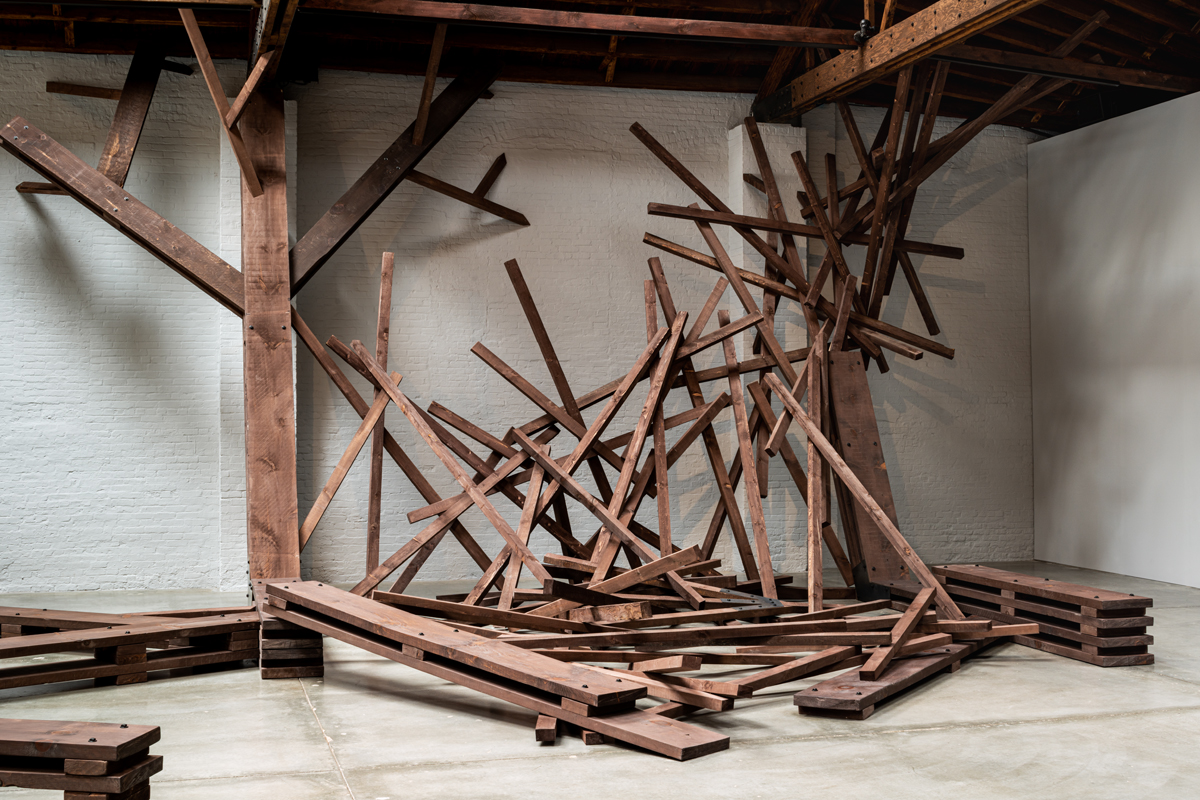 Plexus’s resonant energy ushers us from immersion in a universal to an experience of bottom-up subjectivity. In the first room a singular apparatus structures all space—refracting and processing the frequencies of sound and light alike. Upon passing into the second room the universal sonic field of the first splinters into specificities, and the art becomes an architecture we can lounge on. Walking from one gallery to the next is a material journey out of generalities, shepherded by holy tones and broken crosses. The eyes cede to the ears cede to the ass. By dramatizing various levels of vibrational intimacies, this fantastically unfree arrangement by Norment, an African American woman who left New York for Norway seventeen years ago, asks its audience: How does it feel to feel?

This is not a rhetorical question. The deconstruction of universals can’t be a metaphor. It must be built. It is a question of speaker placement.

Jace Clayton is an artist and writer based in New York, also known for his work as DJ /rupture. He is the author of Uproot: Travels in 21st Century Music and Digital Culture (Farrar, Straus and Giroux) and was awarded a 2020 Andy Warhol Foundation Art Writers Grant to support Behold the Monkey, his upcoming book on contemporary art, faith, and social media. Clayton is currently Assistant Professor of Visual Arts at Columbia University and Interim Director of the Sound Art Program.