From Whitney Houston to digital Annunciation: six artists explore femininity and the web. 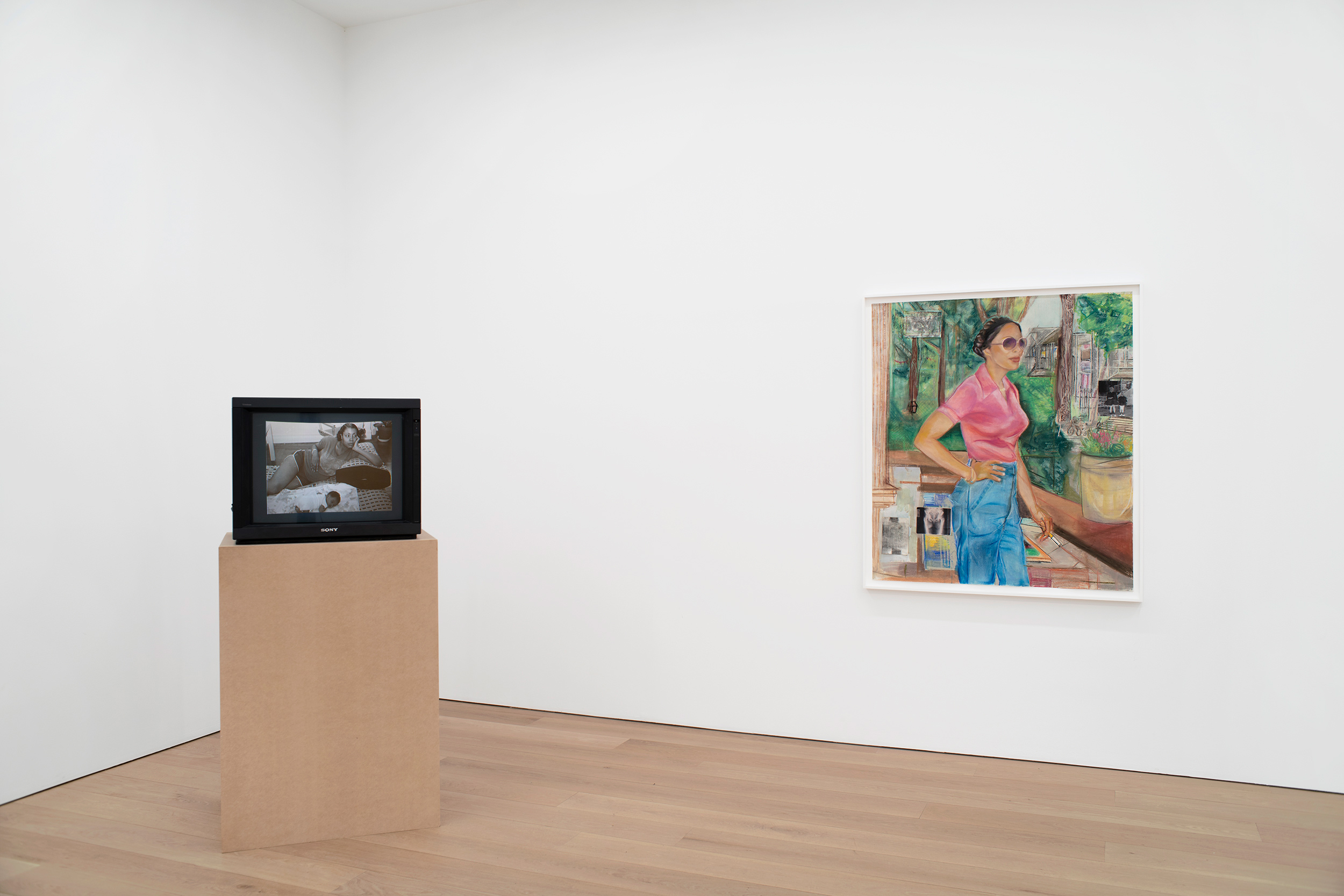 Lauren Michele Jackson’s 2017 article in the magazine of radical politics for adolescent fashionistas everywhere, Teen Vogue, introduced many of us to the idea of “digital blackface”: non-Black people on social media using memes and GIFs featuring Black people as a way to express an exaggerated or comical reaction—a form of minstrelsy. In my concerted efforts to avoid this trap, I came to realize just how ubiquitous Blackness, and especially images of Black women, in meme culture is. To offer one example: vast numbers of people first encountered Nicole Tv (Kayla Nicole Jones) in the form of a reaction GIF that went viral in the fall of 2019, which seemed to perfectly encapsulate the “are you serious?” response that many of us have to, well, everything these days. But erased in the process of her memeification was the fact that this woman was already an Instagram and YouTube influencer with four million followers, famous for producing hilariously self-parodying videos—a creator in her own right, that is to say, though you wouldn’t know it from how or in what form her image was now circulating.

Nicole Tv is one of the women portrayed in Caitlin Cherry’s Her Burnout Tesseract (2021), an oil painting measuring 58 by 104.5 inches included in Black Femme: Sovereign of WAP and the Virtual Realm, deftly curated by Christiana Ine-Kimba Boyle at Canada. Many of the six artists assembled address the intersection of Black femininity and digital technology, a conjunction alluded to by the “WAP” of the title, a term that either means “wireless application protocol” (something that makes sharing data over wireless networks possible) or “wet-ass pussy” (something that Cardi B and Megan Thee Stallion celebrated in their recent, rollicking, and unapologetic anthem to female sexual empowerment). 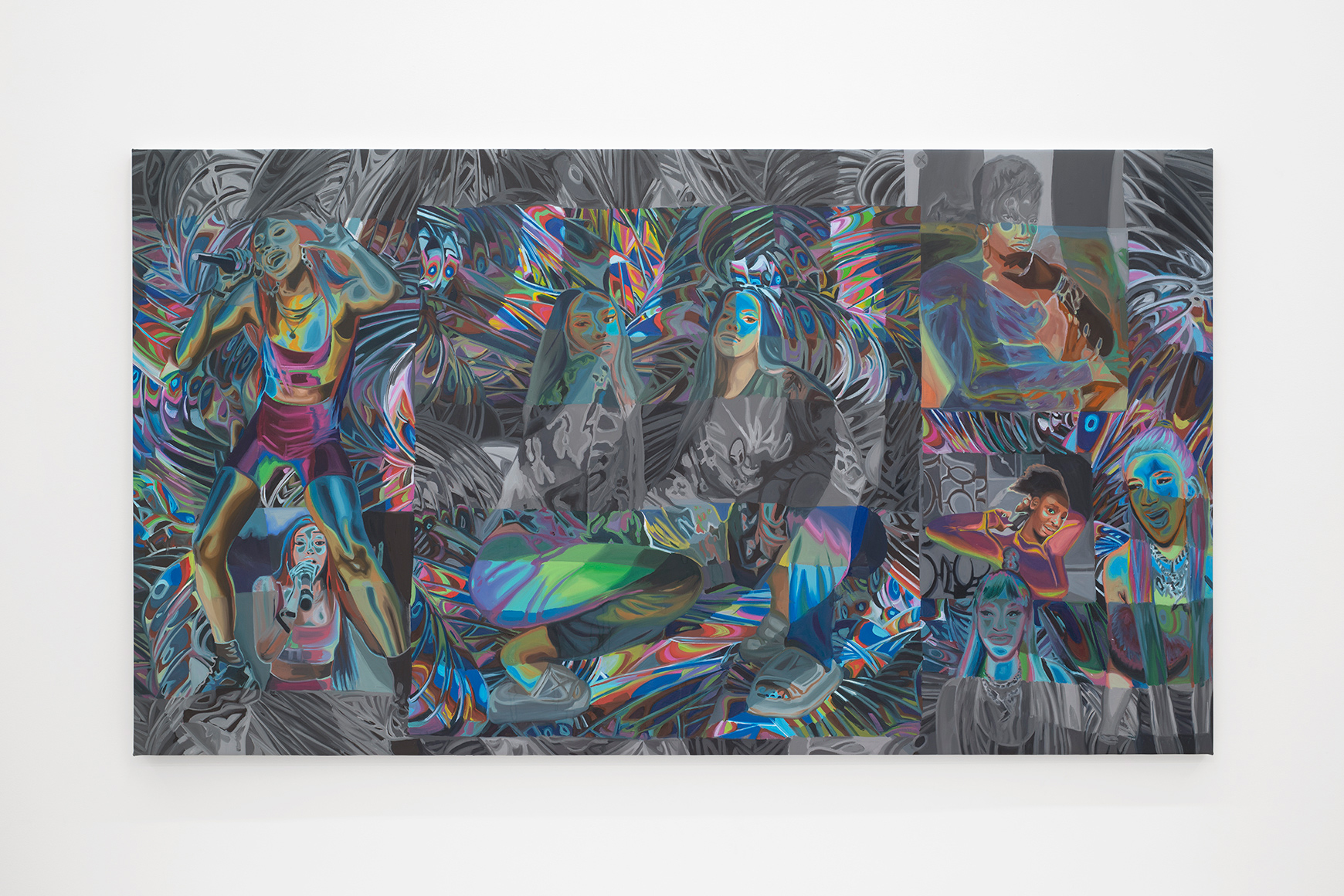 Cherry’s monumental canvas encapsulates the interests of the show most completely; her images of Black femmes focus on Instagram models, sex workers, influencers, and pop-cultural figures whose images inhabit our social media feeds. Her Burnout Tesseract starts with the artist combining and manipulating photos sourced from the internet—in this case, those of Nicole Tv, Cardi B, the rapper Flo Milli, and the Clermont twins (who launched their careers on the reality series Bad Girls Club)—and then rendering them in the analog medium of painting, creating new filters through which Black femininity can be seen, but not passively consumed. Iridescence requires the viewer to shift their position to accommodate what or who they’re looking at; moiré, a type of weaving that involves superimposed but out-of-sync patterns, confuses the eye; grids, starbursts, and foliar patterns camouflage the figures; juxtaposed areas of saturation and desaturation (burnout) further fragment the surface. If you want to access these hard-working women, you are going to have to work for it. 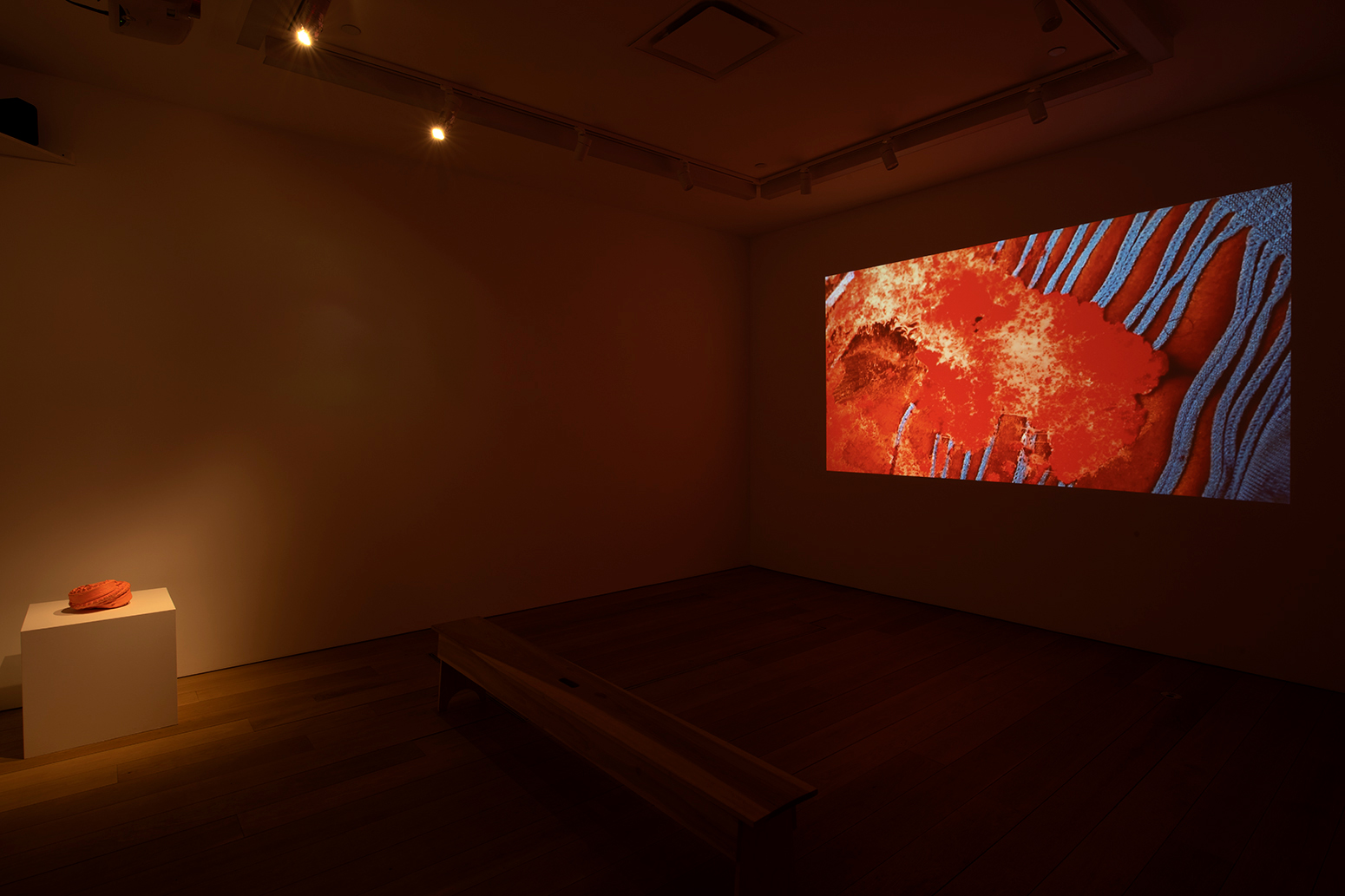 Over the course of about five minutes, a video titled Patriot Games, No 03052021 by Kenya (Robinson) from 2018–21 focuses on Whitney Houston, a celebrity whose life was relentlessly dissected and mocked on social media, and whose death in 2012 was famously reported via a tweet before established press outlets picked up the story. What (Robinson) presents is suffused with both melancholy and joy: televised footage of Houston’s extraordinary performance of the national anthem at the 1991 Super Bowl, in which the camera frequently cuts from the singer to groups of military personnel, air force flyovers, and saluting police officers, is spliced with segments of the popular young YouTube vloggers Twinsthenewtrend (Tim and Fred Williams) reacting with charming and sincere enthusiasm. The soundtrack remixes Houston’s vocals with rhythms from SpotemGottem’s 2020 track “Beat Box.” Topping this off are strange closeups of (Robinson)’s booty as it smushes red, white, and blue-frosted baked goods. (A painted resin sculpture of a flattened birthday cake titled If I’d’ve Known You Were Coming, I’d’ve Baked You a Cake [2018] sits, abjectly, nearby.) Patriot Games, No 03052021 implicates both US white supremacy and toxic internet culture for their use and misuse of Houston’s talent while reminding us of what gifts we lose in the process. 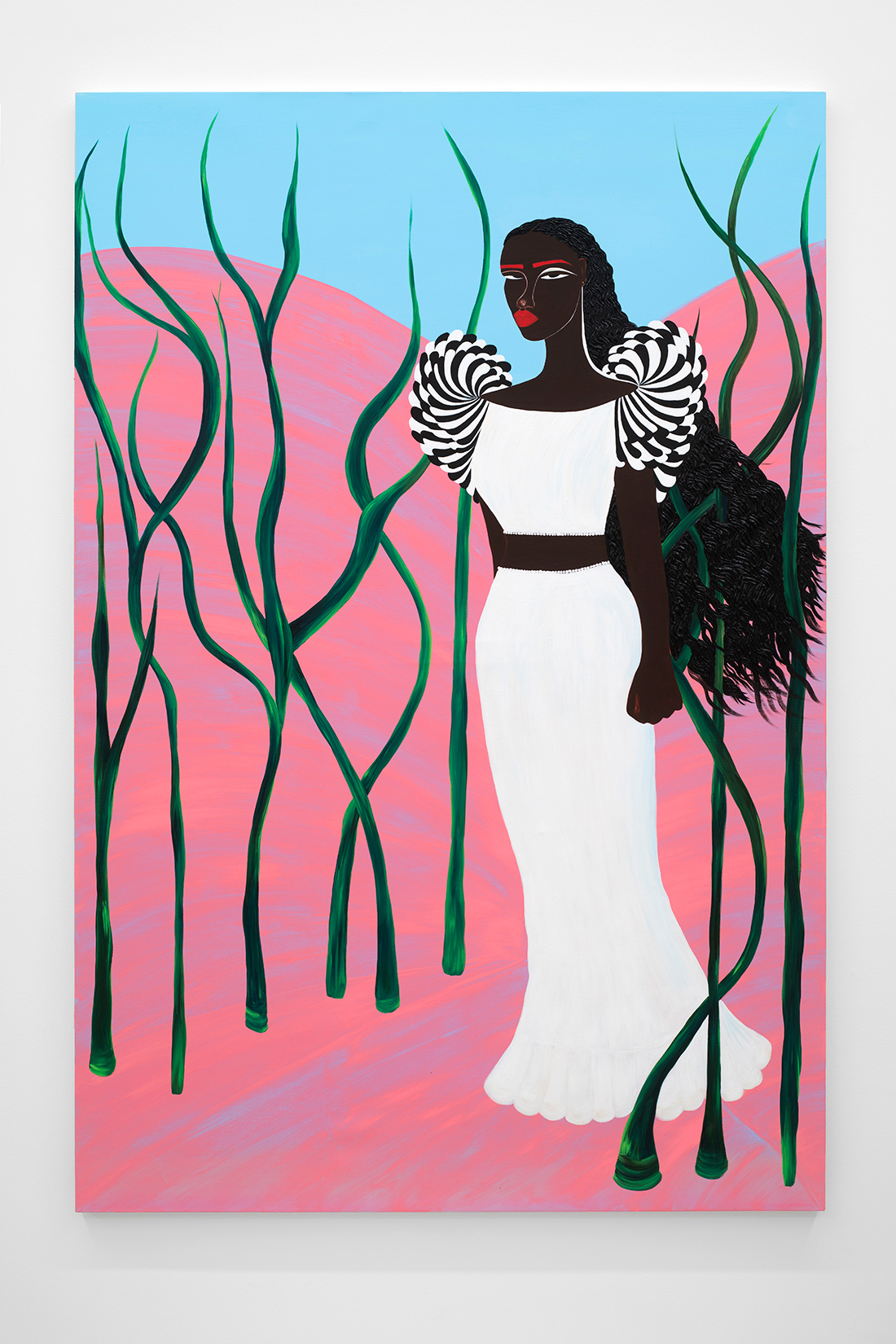 Delphine Desane, I have a rendez-vous with Life, 2021. Acrylic on canvas, 72 × 48 inches. Courtesy the artist and Canada. Photo: Joe DeNardo.

Works by three artists in the show, though not as obviously tied to the theme of digital culture, offer new approaches to portraying Black women. Delphine Desane’s I have a rendez-vous with Life and To no longer think. Second act (both 2021) draw upon Western art historical examples (Henri Rousseau, the Surrealists), Haitian art history (the Obin family, Toussaint Auguste, Hector Hyppolite), and African visual and material culture (Dan masks, Asafo flags) to create dreamlike images of ebony-skinned women decked out in fantastically stylish gowns. (Desane is a former stylist, and her work has been featured on the cover of Vogue Italia.) Emily Manwaring’s Swans Nwa pandan Matinée (2020)—“Black swans during the matinée,” in Haitian Creole—is a canny update of Degas’s ballerinas, rendered in a style that recalls Emma Amos. Unlike Degas’s figures, these dancers, crowded cheek and jowl, refuse the deracinating discipline of classical dance culture in favor of an exuberant celebration of Black femininity: colorful leotards and tutus (sometimes embellished with pasted-on sequins), large gold hoop earrings, acrylic nails, and natural hairstyles instead of severe buns. Sydney Vernon’s Tying Loose Ends (2020), a large-scale pastel, charcoal, acrylic, and collage work on paper, and its accompanying video, Untying Loose Ends (2021), involve creating an image of the artist’s late aunt by sourcing family archives—letters, medical records, X-rays, photographs, and so on. Vernon, who will graduate from Cooper Union this spring, has a remarkably confident hand that draws on both classical portraiture and architectural renderings, situating her subjects in a pictorial space that is complicated by collaged elements and shifting perspectives. 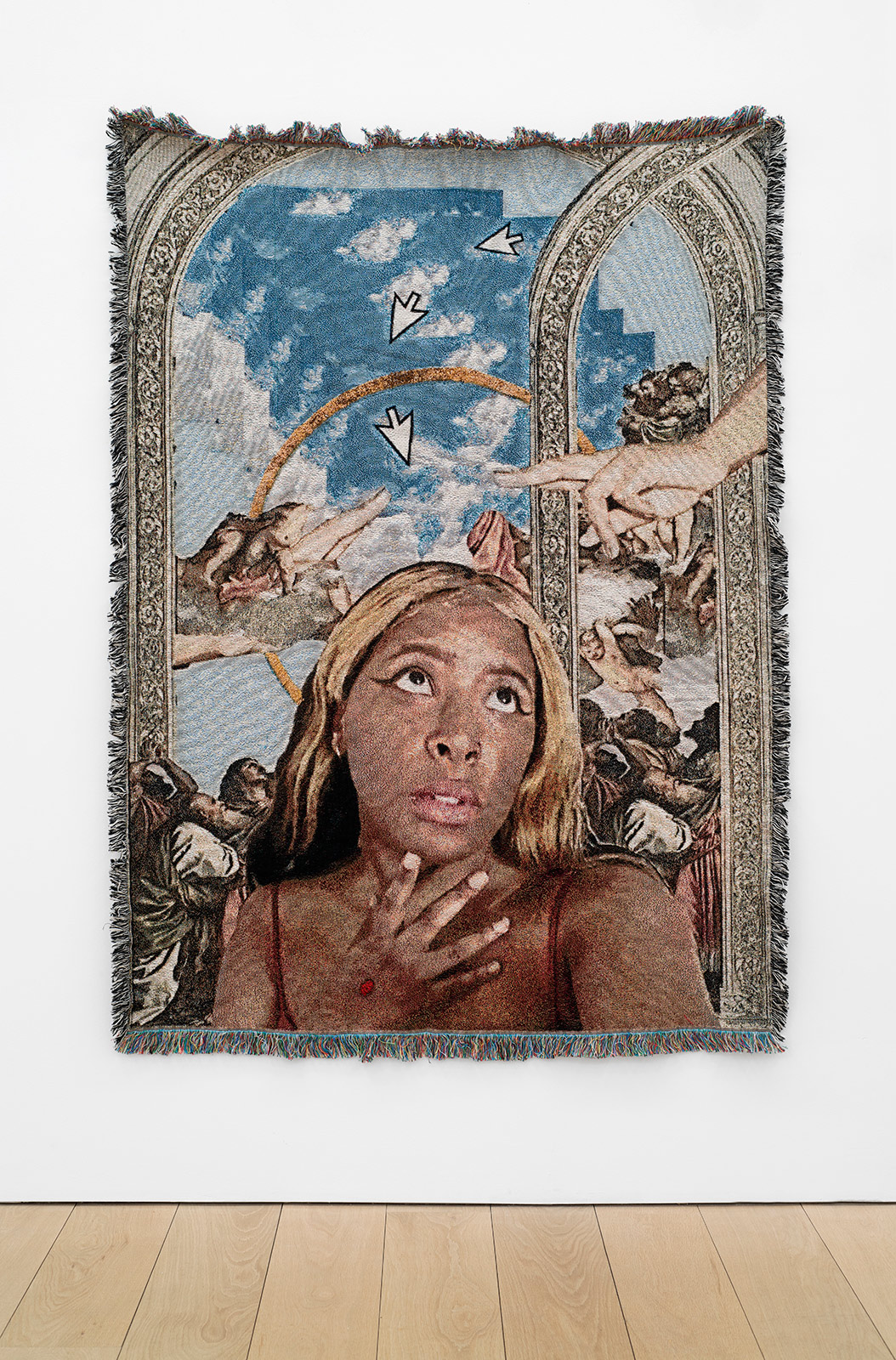 I loled when I saw Qualeasha Wood’s brilliant fore the day you die, you gon’ touch the sky (2021), an artwork that worships at the altar of the World Wide Web. The image consists of a selfie of the artist with finger touching chin in fearful recognition and eyes rolled upward to gaze at a white hand bestowing a blessing upon her. She sports a thin gold halo rendered in glass beads, bears stigmata on her hand, and is framed by carved arches, hordes of apostles, and putti. At the same time, a trio of computer cursors arcs toward her and the cloud-speckled blue sky appears glitched, as if a computer-generated image has failed to load properly. This is an Annunciation for the digital age, and the fact that it takes the form of a Jacquard tapestry doubles down on the absurdity: it references both earlier forms of elite Western art and the pixelation of screen-based images. The ambivalence of being a Black femme Chosen One in our current digital landscape, Wood seems to say, is as double-edged as it was in the Virgin Mary’s case: yes, you get the glory, but only at a price.

Aruna D’Souza is a writer based in Western Massachusetts. She is co-curator of Lorraine O’Grady: Both/And at the Brooklyn Museum of Art; editor of Lorraine O’Grady’s book Writing in Space, 1973–2019 (Duke University Press, 2020); and a member of the advisory board of 4Columns. In 2020, she received a Creative Capital | Andy Warhol Foundation Arts Writers grant for short-form writing.