In her remake of the 1971 film, Sofia Coppola embraces women’s emotional complexity. 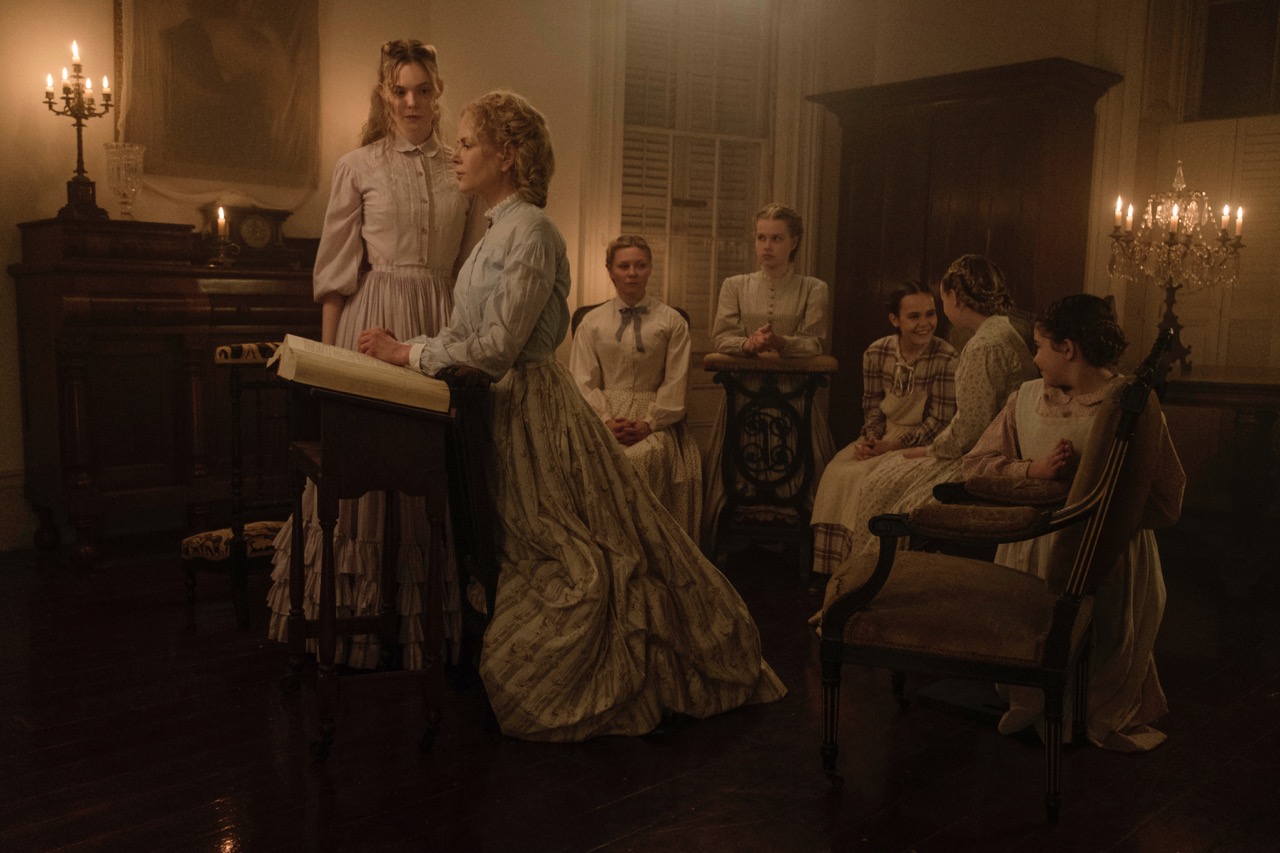 The Beguiled, directed by Sofia Coppola

In Sofia Coppola’s arresting new film, The Beguiled—for which she won Best Director at this year’s Cannes festival—a group of women live out the last moments of the Civil War at a school for girls in the Deep South. At the start of the film, with guns and canons blasting in the near distance, one of the schoolgirls is picking mushrooms in the woods when she happens upon a wounded Union soldier, Corporal John McBurney, an Irishman played by Colin Farrell. She’s startled at first, but out of the goodness of her Christian heart, young Amy—played by newcomer Oona Laurence with grave, earnest eyes and two long Wednesday Adam braids—decides to bring him back to the school, where his injured leg can be tended to before the headmistress, Martha (a perfectly cast Nicole Kidman—stately and slightly creepy), hands him over to the Confederates. Over the course of several days, McBurney charmingly insinuates himself into the women’s lives, and the women, increasingly and consequentially, into his. In parsing the film’s artistry, the most direct comparison might be made with the 1971 Don Siegel version starring Clint Eastwood as McBurney, also adapted from the 1966 novel by Thomas P. Cullinan. In doing so, a clear contrast emerges. It is obvious, as a friend put it, that the original film was made by a man. 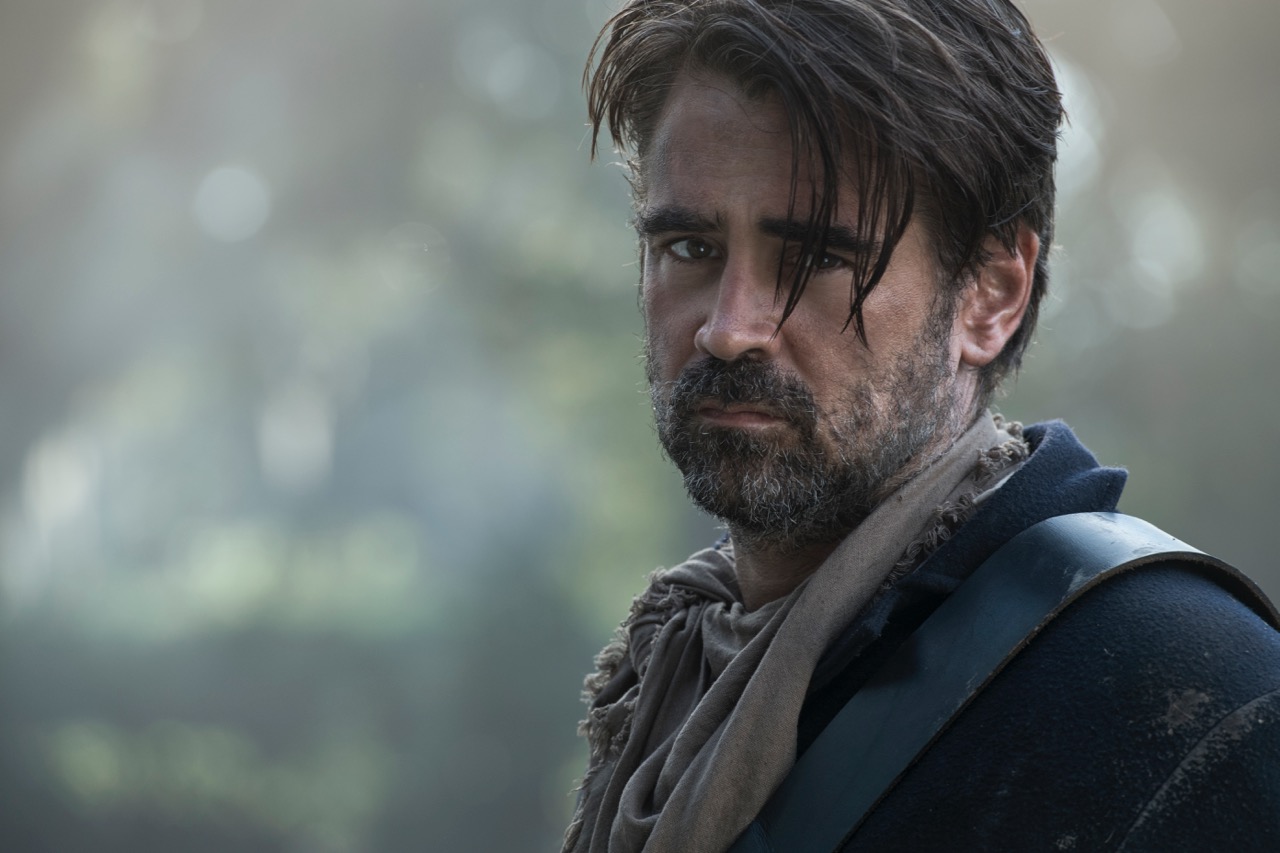 But the richer comparison is between The Beguiled and The Virgin Suicides, from 1999, which Coppola faithfully adapted from Jeffrey Eugenides’s 1993 novel about the sequestered suburban lives of five ethereal sisters. Each film sits on either end of her eighteen-year career, and both films, while aesthetically and temporally different, are specifically interested in a group of women and girls’ emotional complexity, as well as their psychological privacy. In Siegel’s movie, women, in their seductions and contradictions, are exposed. But in Coppola’s version, while women are seen, felt, and heard, their complicated inner lives given room to breathe through attentive camerawork, their intentions are concealed. These women and girls are part of sisterhoods—literally, in the case of The Virgin Suicides—whose dynamics compose an entire world of their own. This is to say that Coppola has managed to build narratives of female privacy.

Siegel’s film is punctuated by constant exposition in the form of voiceover; the women dwell on their loneliness and lust with artless declarations. But in Coppola’s film, which astonishes with its immersive ambivalence—each woman’s clipped tightness is mixed with a teetering abandon—there is no broadcasted inner voice. Similarly, with The Virgin Suicides, in Eugenides’s novel the audience must rely heavily upon the narration of a group of teenage boys who worshipped the sisters. Coppola’s adaptation uses the camera to approximate the girls’ lived reality, which weighs significantly against the boys’ fantasizing. Close-ups and tracking shots of the girls at home giggling and primping and idling oversteps unreliable narrators with an imbued femininity. In The Beguiled, the schoolteacher Edwina, played brilliantly by a varyingly fatigued and determined Kirsten Dunst, expresses a severity that fails to suppress intense longing and desperation. When McBurney arrives in the house, she begins wearing her special broaches; it is ornament, and not confession, that clues us in to her hidden passions. 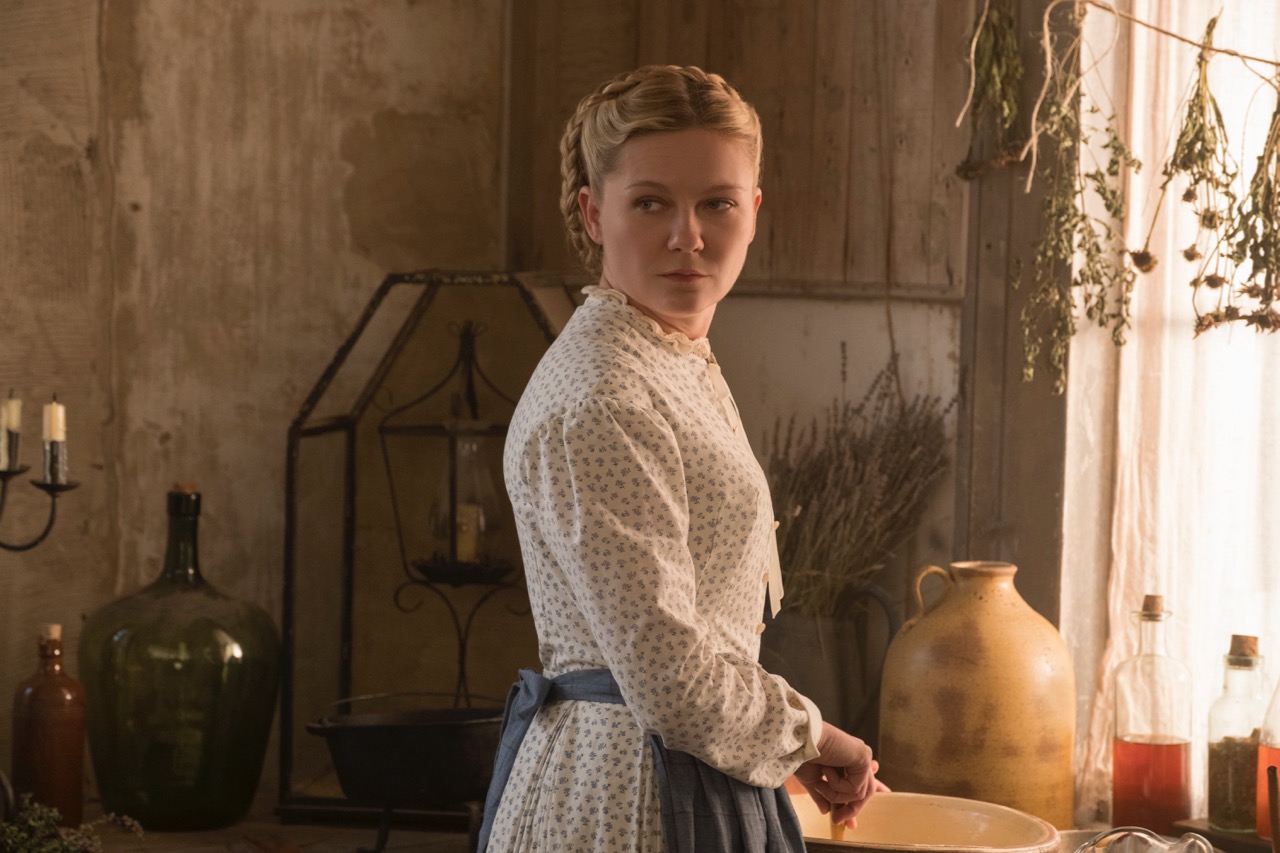 Coppola’s rendering also teems with absence. The film tracks McBurney’s sojourn at the school, from his wary welcoming by Martha, Edwina, and the girls, to his charismatic assimilation into their daily routine, and then to a sudden terrifying shift, in which the group’s shaky harmony is shattered. But his arrival comes after a major exodus; in the film’s first few minutes, when Amy breathlessly informs McBurney of the nearby school, she mentions that all the slaves have gone. Coppola has been accused of excising race from her film, since in Siegel’s adaptation, a female slave, Hallie (Mae Mercer), remains and tends to the garden. However, despite Coppola’s stated intention in a recent interview in BuzzFeed News to focus solely on gender, race is present as a powerful subtext. Her film fixates on the same garden, but instead of Siegel’s caricature of the no-nonsense, and apparently loyal slave, the restless white girls of a war-torn South must care for it. It is only when McBurney begins to recover from his injury that the absence of slave labor can be filled; he urges Martha to allow him to stay on as a gardener instead of releasing him back into Confederate territory.

Although death and destruction surround the women, a sense of Southern propriety is maintained. Martha and Edwina hold the girls to high standards, even as Southern society—slave-owning society—is defeated. Still, when McBurney arrives, he is received, and kept, with less apprehension than one might expect, especially when one of the girls exclaims, as the women carry his suddenly unconscious body into the house, that Yankees rape Southern women. But McBurney is a drifter from Ireland, and confesses to Martha that he accepted three hundred dollars to take another man’s place in the war. He’s a surrogate, not only for the man who paid him, but for the women. He fills in the absences—of love, affection, slave labor, order, and society—and so becomes more and more entangled in the complex dynamics at the school. This is also true of Eastwood’s McBurney, but there is one essential distinction: in Coppola’s film, there are no images of the men who the women have loved and lost. Martha briefly acknowledges a late husband; Edwina has lost no one in the war or, it seems, otherwise; and Amy, who looks up to McBurney as a father figure, mentions a dead brother—but that’s the extent of other men’s presence in the film. All images of nurturing, tenderness, and flirtation are with McBurney alone. The younger girls giggle and flash smiles, especially the purring teenage Alicia (played, almost anachronistically, by Elle Fanning), who makes a direct conquest. Although McBurney is a seductive presence, the women are not merely reactive; in Siegel’s film, female desire is pathological, but in Coppola’s, it is self-determined. 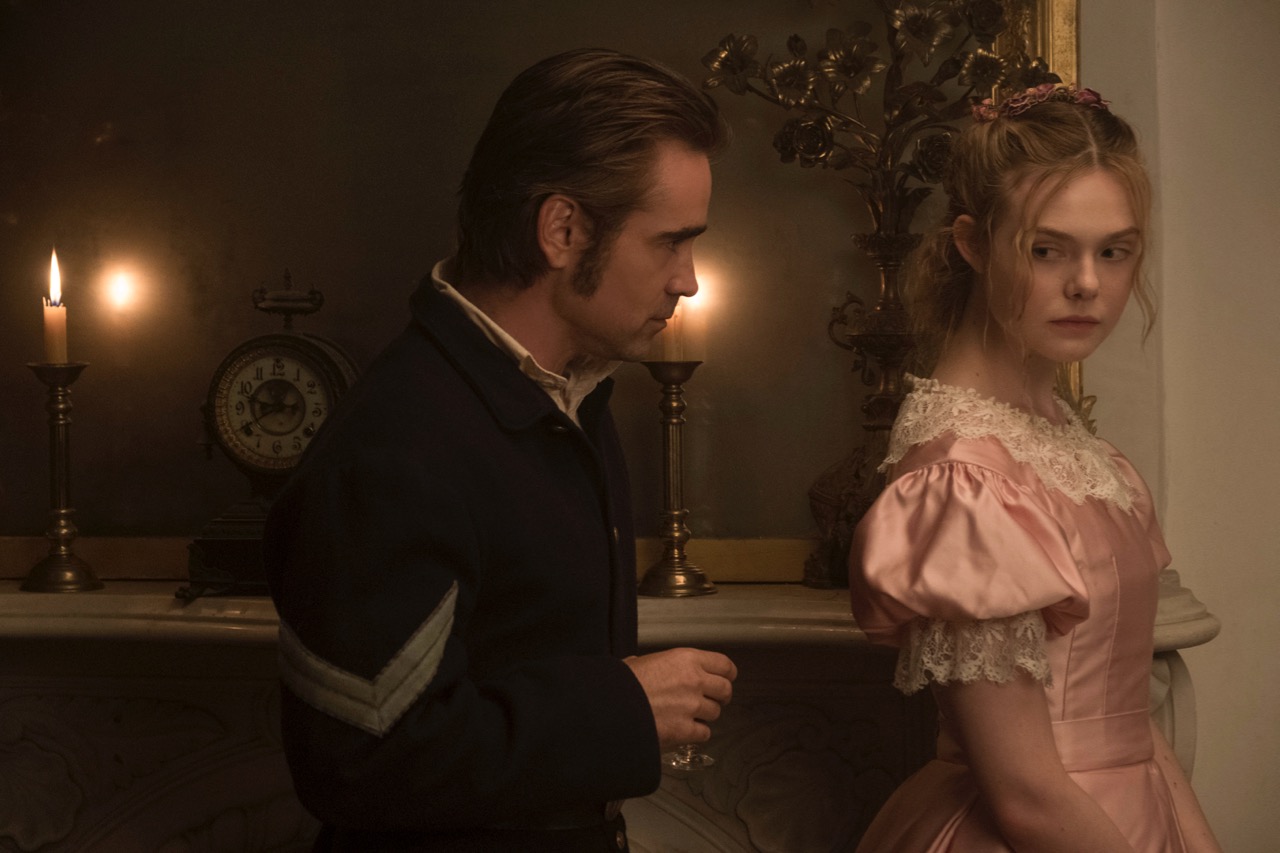 The femininity of Coppola’s films is not only aesthetic, but felt. From The Virgin Suicides to Lost in Translation to Marie Antoinette to The Bling Ring, women are given the space to enact the parts of them that society, even and especially now, in the age of unapologetic corporate feminism, would have them quiet: coquettishness, possessiveness, anxiety, flightiness, vanity, and soulfulness. But Coppola’s deft interpretation of Cullinan’s novel does not transform the petty, vengeful spinsters of Siegel’s adaption into modern heroines. They are, in a sense, former slave owners who must now renegotiate their possessions. McBurney is not hapless in their care—when he sits down to his final meal at the house, he assuredly takes his place at the head of the table. But, as Martha has already pointed out to him, he is not a guest, but a visitor, and when he overstays his welcome, we witness how fragile possessions can be.

Cassie da Costa is a member of The New Yorker’s editorial staff, and produces the magazine’s video podcast series, “The Front Row.” She has contributed writing to newyorker.com, Film Comment, and Feministing.com.