For her new album Madame X, it’s Portugal and an eye patch. 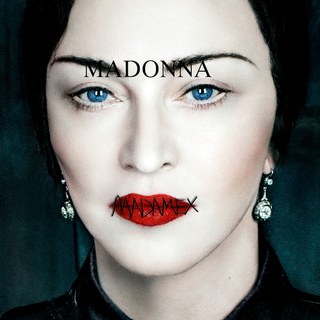 Don’t let the tantalizingly sardonic title “Killers Who Are Partying” get your hopes up for a Trump-era diss track engineered for the dance floor. The sixth song on Madonna’s mostly enjoyable new album, Madame X, released last week, is an alarming, melodramatic, fado-inspired identification with the downtrodden. “I will be gay / if the gay are burned,” she begins, accompanied by a mournful melody plucked on the steel strings of a Portuguese guitar. (Since 2017, the artist has lived in Lisbon, embracing the region’s traditional music as an influence.) “I’ll be Africa,” she continues, briefly affecting an accent of some kind, “if Africa is shut down.” Happy WorldPride, everyone.

When pressed during a recent NME interview on the song’s conceit, which many may find off-putting in light of the pop star’s tremendous privilege (the “I will / if” construction goes on and on, enumerating other oppressed groups), the artist shot back that, first of all, she has herself experienced sex discrimination all her life, and, second, “Killers” is “about unifying the soul of all humans. And I have a right to say that I want to do that.” Conversation closed.

Still from music video for “Medellín.”

Madonna’s politics have always been, at their most cogent, expressed as a Khaleesi-style social progressivism—inclusive, benevolent, exploitive, and monarchical—with an emphasis on her own freedom of speech. From the maracas of 1986’s “La Isla Bonita” (her first Latin-inspired song), and the house chord progression of 1990’s “Vogue” (the first song of hers that drew significant fire for appropriation—of queer and trans black and Latinx subculture), to the global sounds and international artists on her new record, she’s barreled ahead with a clean conscience, trying every style on for size. And, with her current persona, Madame X, a spy and master of disguises who wears an eye patch (why not?), Madonna’s customary cycle of self-reinvention is accelerated, her identity and culture changing from song to song. Or perhaps it’s more accurate to say that with the adoption of the shape-shifting character, she officializes a career-spanning strategy, and now practices it without restraint.

“Killers” represents the perils of her approach, but for the most part, Madonna pulls it off. The album’s opening song, “Medellín,” a collaboration with Colombian reggaeton star Maluma, released as the lead single in April, promises magic with its first line (“I took a pill and had a dream . . .”) before seguing into a cheerfully sexy, endlessly listenable Latin-pop duet. The hooky, rapid-fire party track “Faz Gostoso,” featuring Brazilian singer Anitta and sung almost entirely in Portuguese, is my favorite, with its skittering beat, chaos of vocal samples, sirens, and explosions of sub-bass. There is also the bizarre and moving call-and-response batuque song, titled “Batuka,” for which the pop star worked with an all-women group of Cape Verdean musicians, layering epic electronic elements over their djembe polyrhythms. The singer’s cyborg-queen voice, auto-tuned almost beyond recognition, cuts through the drumming, with a kind of hymn that invokes an unnamed struggle. The women faithfully echo each line.

Still from music video for “Medellín.”

Madame X stumbles most grievously not when Madonna forwards her transcendent, cross-cultural soul-unification agenda—as perplexing as it may be—but rather when she experiments with something more like “critique.” Last month’s Eurovision performance in Tel Aviv, which BDS activists pressured her to cancel, served to debut another single, the Diplo-produced, dancehall-flavored track “Future,” which features the rapper Quavo. The corny, vaguely menacing lyrics warn, in the oft-repeated chorus that starts the song off, “Not everyone is coming to the future,” and the first verse begins with Madonna’s accusation, “You ain’t woke.” The elaborate stage show accompanying this brew of sanctimony and incoherence included such elements as dancers in gas masks and flower crowns; Quavo in a daze, wearing armor; and a video backdrop of a blazing apocalypse. The coup de grâce was perhaps predictable: a pair of dancers with Israeli and Palestinian flags taped to their respective backs ascended the set’s central staircase, arms linked.

Still from video of Madonna’s performance at Eurovision 2019.

When the music finally stopped, Madonna whispered into her mic, “Wake up,” a command rather hard to swallow after the carnivalesque political fantasy just witnessed. The phrase plays only slightly better when it resurfaces as a motif in her song “God Control,” whose retro disco production is an upbeat tongue-in-cheek foil to its subject. In Madame X’s most fleshed-out indictment of our dystopian present, Madonna offers credible observations, such as “Everybody knows they don’t have a chance / To get a decent job, to have a normal life.” And though arguably she undercuts her case with a windup toy rap of non sequiturs (“People think that I’m insane / The only gun is in my brain / Each new birth, it gives me hope / That’s why I don’t smoke that dope”), this disconcerting moment is far superior to the whole of “Dark Ballet,” which seems composed of a teen poet’s discarded couplets, showcased by spare instrumentation and intercut with a wicked-witch spoken word declaimed to Tchaikovsky’s “Dance of the Reed Flutes.”

Better than anyone, Madonna knows that the ecstatic momentum of a hit can be generated by bold stupidity, the shameless elevation or ingenious reframing of what’s simple, obvious, or tried-and-true. Thirty-eight top-ten songs released over the course of almost as many years supply a mountain of evidence that, when married to the perfect beat, platitudes are more than passable—they can feel like fresh truths. The writing that kneecaps Madame X does so not because it’s trite, and not because it reflects half-baked opinions streaming from a garbled and self-aggrandizing humanism, but because lyrics burdened with such flaws, which are endemic to her pop oeuvre, cannot survive the brutal environment of forced wackiness that control freaks orchestrate to feel they’re cutting loose. People love to say Madonna gives zero fucks, and I know what they mean, but the most physically disciplined and brilliantly calculating megastar of all time likely gives far too many.

Luckily, tucked inconspicuously into the album’s home stretch is “I Don’t Search I Find,” a deep-house track that, with its electronic claps and dreamy disco strings, comes on like a rush of air-conditioning on a hot night. As if the pill she took at the start of “Medellín” has begun to kick in, Madonna states, in her secretly euphoric imperious monotone, “Finally enough love.” She doesn’t search, she sings, because she’s already found love. She’s found us. The beat is icy but pulsing, the love is impersonal but real, the mood is very Daenerys in the club. Finally, this doesn’t feel like Madame X, but like regular Madonna, our problematic fave, long may she reign.