An artist at her work: the painter’s 1801 portrait of
Marie Joséphine Charlotte du Val d’Ognes. 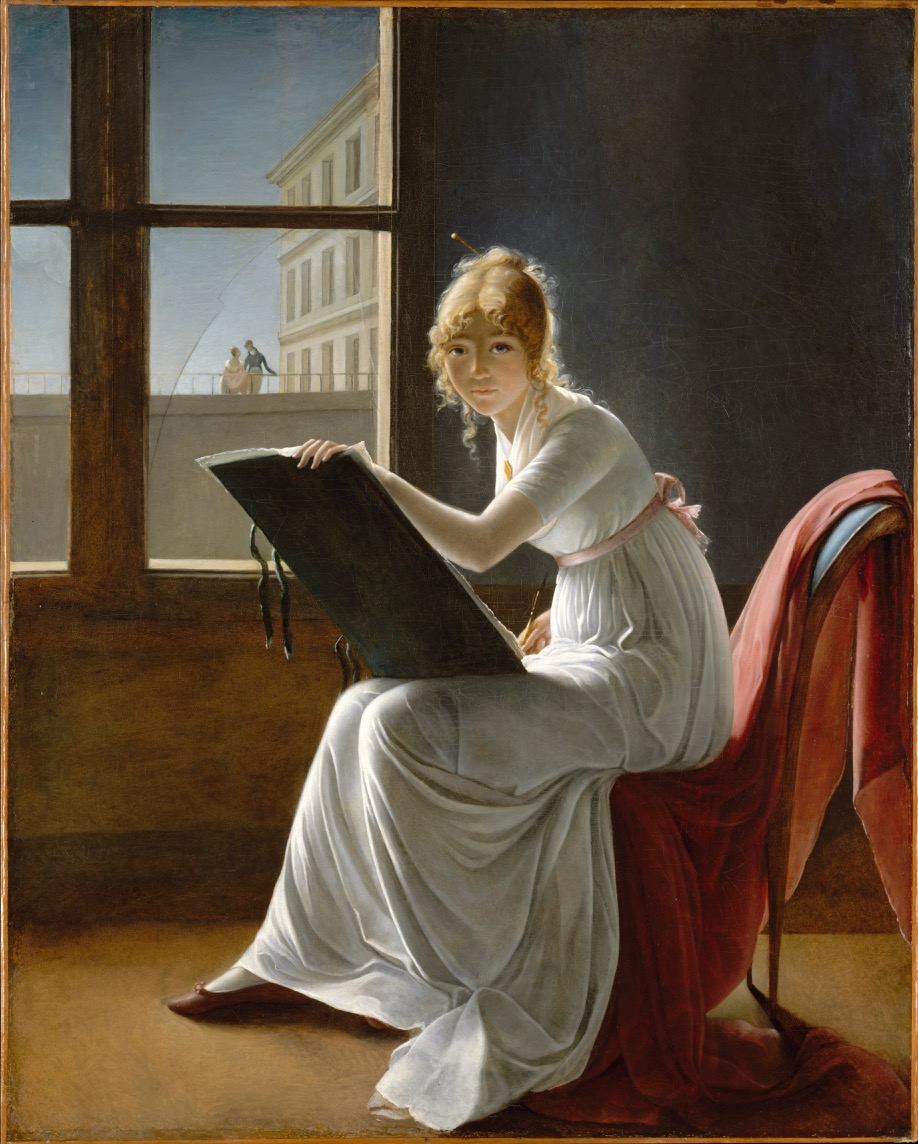 A young woman leans forward to get a good look at us. The fact that we’re looking at her is not her concern; she is intent on doing something with us, and it will take time. The quiet of the spare room will ground a long session made up of many moments like this.

The long fingers of her left hand pin some sheets of paper over the top of the portfolio. Her right hand, grasping a lead-holder, will soon lift to mark the page, rendering into lines the subject she’s fixing with her eyes. She is absorbed, rising to the challenge. It is so easy for a drawing to fall short of life. Every moment poses the question: Am I an artist?

Her simple sashed cotton dress and her hair pinned in a high bun are unfussy and also perfectly in fashion at this time, as is the chair she sits on. But she is not posing. Her face is serious and unconcerned about how it appears—a rare experience for a young woman like her. She is not upright and on view but slightly hunched, her breast blocked by the arm steadying the portfolio. The light coming in from the window casts her face in shadow. Things are set up so that the light bathes not her but the person she is drawing. It’s a direct light coming from the southeast, already pretty high. It’s probably midmorning in spring or summer.

The painting exists because someone else was drawing her as she drew, a reciprocal situation. Research by Anne Higonnet places the making of this portrait in rooms in the Louvre palace that had shortly before been granted to female painters to use. We are in a southern wing of the palace looking south, across the Seine, where we see a high wall on the opposite (left) bank. The current identification of painter and sitter are reasonable proposals given the evidence, but will probably never be confirmed. We know that these rooms were for women to use as studios. This is a woman drawing, portrayed by a woman. As we observe this painting, we put ourselves inside a working relationship.

Through the window, in the distance, we see a different interaction unfold. A man and a woman on an outing in pleasant weather have stopped at the wall above the river bank. Two-hundred-and-twenty years later, we can read the body language. A woman in a white dress with a pink shawl is gazing up at a young man wearing mustard breeches and a dark tailcoat, the latest fashion. She bends her upper body (mirroring the bend of our artist) and lifts her head toward him in an attitude that suggests friendly, mildly conspiratorial agreement, possibly even momentary laughter. You can almost see him grow in confidence as she engages him.

The artist facing us wears the same hairstyle and clothes as the woman seen through the window, with her pink shawl draped over her chair. We don’t need to cast these two female figures as alternative identities or divergent existential paths. The artist now hard at work might well enjoy a promenade with a gallant suitor on another day of the week. We have, instead, a contrast between two social modes, one well defined and the other hardly known before. The woman through the window is involved in an ancient and familiar (if continually adapted) ritual of heterosexual courtship. Society had many views and guidelines about how it should be handled.

The woman in the room, fixing her subject in order to draw it, and being drawn in turn, is involved in a less-scripted scenario. Two female artists are in the process of observing each other as they work. It was not new for female artists to produce viable works in all the traditional male-dominated genres—history painting, church art, portraiture, etc. But this situation, one woman drawing another woman drawing her, in studios recently reclaimed from a royal palace for the use of persons newly defined as citizens endowed with innate rights—none of it is traditional. This painting places us in the midst of a collaborative adventure, with no social map provided. To be here, to be doing this, was to be shaping new social identities into existence.

The backlighting haloes the artist in a fine silver dust, introducing a fantastical quality into the painting’s careful attention to things. An episode of artistic labor is touched with the magic of an Annunciation. Isn’t that how a new social reality feels, both intensely real and unreal at the same time? The charcoal-dark wall behind her is just what it is, an unadorned wall, but it is also an incalculable gray atmosphere. What she draws remains unseen, catching the light and emerging from what we label as darkness.

We see the background vignette through a break in the window pane, revealing that the glass has darkened with dirt. It’s a detail that assures us the painting isn’t making things up. If the glass is dirty and broken, so it is. If the room looks strangely empty, it’s because studios like this were spare, no more. Yet the break in the window, forming a nearly gothic arch, also introduces a note of allegory. Let in more light and air, by any means necessary. You won’t know what filter is dimming your seeing until you remove it. Break through conventions and you might get a new grasp on the world. These rooms no longer belong to royalty but to female citizen painters who are seeing the world afresh, in part by seeing each other.

When it becomes possible again to visit the painting in person, take notice of the basic fact that this young artist is carefully scaled to life-size. For security reasons, the museum has hung it (and other paintings) high, maybe a foot higher than it was meant to be. Take fifteen or so steps back and you get some sense of how the portrait might behave on the level with you. I think you’re meant to be sitting (not standing) across from her. You’re meant to share her ground.

Right now, with the Metropolitan Museum shut down due to a pandemic, this painted conversation is missing us. When the Chinese Communist leader Zhou Enlai was asked what he thought the French Revolution had accomplished, his reply was, “It’s too early to tell.” It still is. We’re still working out our relation to this young woman who is seeing for herself and becoming an artist.

Alexander Nagel is Professor at the Institute of Fine Arts, New York University. He is the author of The Controversy of Renaissance Art (Chicago University Press, 2012) and other books.