Architecture
Toward a Concrete Utopia

Brutalism and nation building: a look back at Yugoslavia’s
postwar architecture. 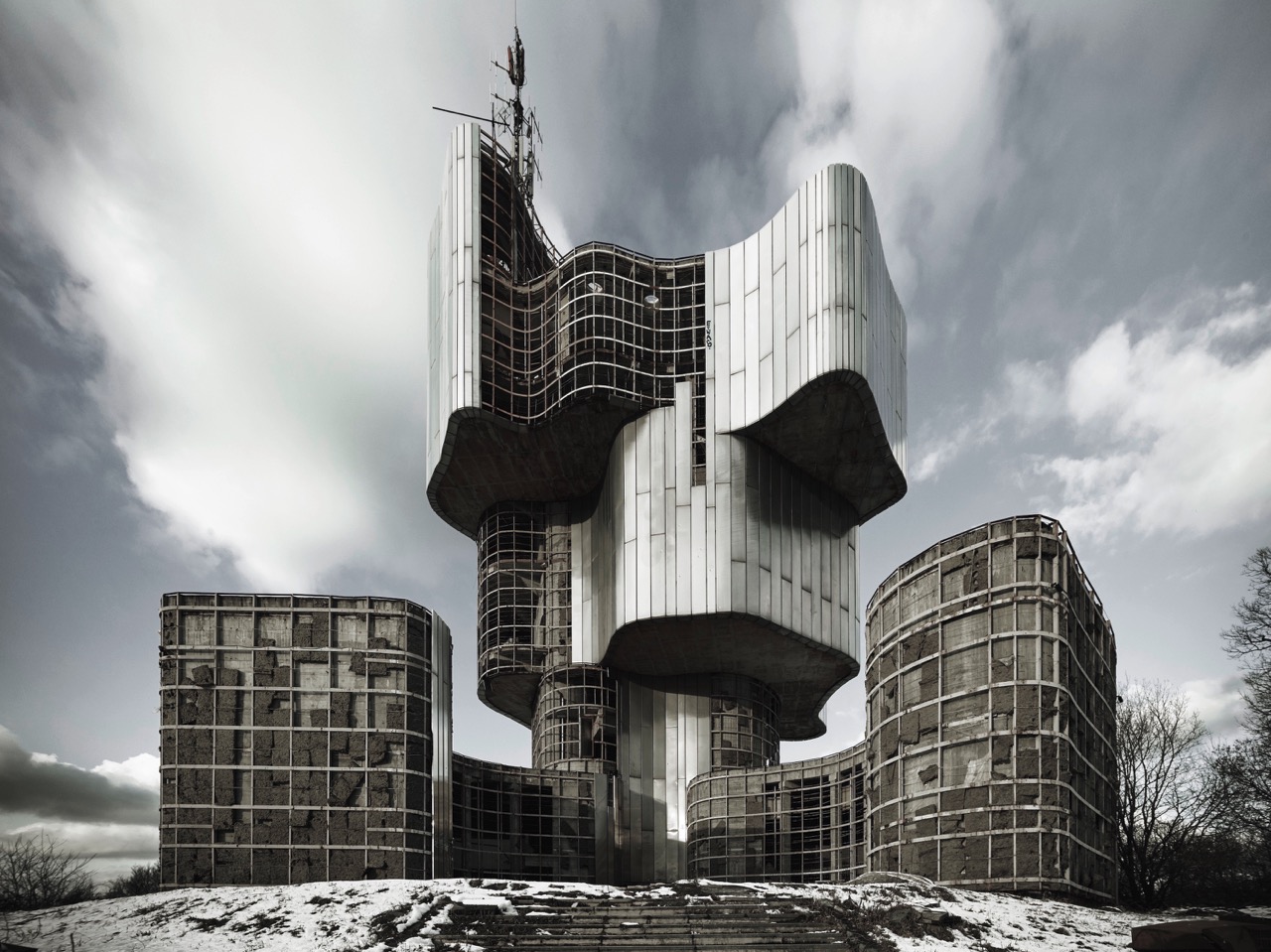 Berislav Šerbetić and Vojin Bakić, Monument to the Uprising of the People of Kordun and Banija, 1979–81. Petrova Gora, Croatia. Exterior view. Photo: Valentin Jeck, commissioned by the Museum of Modern Art, 2016.

If asked to consider architecture from the Cold War period, visitors to the Museum of Modern Art will likely mention a few big American and Western European names: Wright, Johnson, Le Corbusier, Jacobsen, Eames. All are well represented in the museum’s permanent collection, and many of their designs can be purchased in the gift shop. MoMA’s guests are less likely to know much about mid-century Soviet architecture; the museum tends to celebrate the Russian and Soviet avant-garde rather than the art and design made after Stalin’s purge: massive socialist realist sculptures of happy workers, the “Seven Sisters” high-rises in Moscow, and Khrushchyovka, those endless, drab apartment blocks.

Toward a Concrete Utopia: Architecture in Yugoslavia, 1948–1980 proposes another history of modern architecture between East and West—what the former Socialist Federal Republic of Yugoslavia called “the third way.” The show offers the first extensive look at a nearly lost chapter in this postwar story, an era when the aesthetic and technological breakthroughs of modern design were adapted for a new kind of society, with startling results.

On the wall outside of the exhibit is a brief timeline of Yugoslavia’s history. It was a country born in the ashes of empire, first as a breakaway kingdom from the Austro-Hungarians after World War I, and then again as a socialist republic in the aftermath of the German occupation of World War II. Within its bounds were six independent states with their own nationalities, languages, and religions: Bosnia and Herzegovina, Croatia, Macedonia, Montenegro, Slovenia, and Serbia—with two autonomous provinces, Vojvodina and Kosovo, nestled within Serbia. After the destruction of World War II, Yugoslavia undertook a massive rebuilding effort, accepting aid from both the West and the Soviet Union to remake a ravaged country and unite disparate nations into a single state. The exhibit starts in 1948, the year Tito (Yugoslavia’s president for life) split with Stalin. This political rupture allowed Yugoslav architects and artists to undertake radical aesthetic experiments—unlike their Eastern bloc counterparts, who were forced to march in lockstep with Moscow. Tito’s death marks the end of the exhibit, lending a wistful glow to images of cities and buildings that would later be damaged or destroyed in the civil wars of the 1990s. 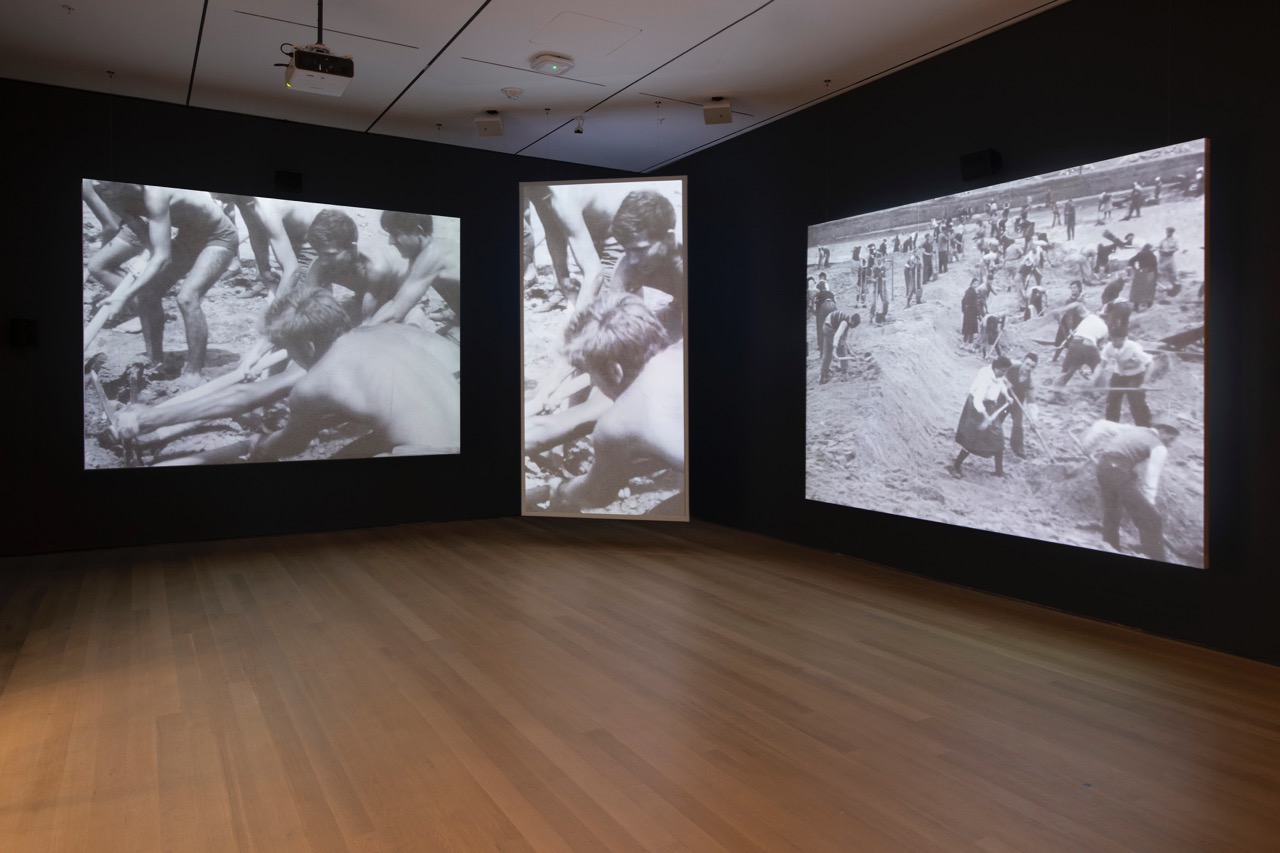 Visitors enter the exhibit through a darkened room where an architecturally themed, three-channel film by Mila Turajlić plays on screens against a soundtrack of chants and industrial clangs, guitar riffs, and jazz flutes. The film installation shows clips of citizens digging out the rubble from the war, a kissing couple discovered by workers inside a metal pipe, buildings rising taller, and a 1970s Yugoslav rock band tooling around a city in a truck, playing their music in the streets. This chamber sets the mood for the whole show, which opens out onto a series of galleries filled with architectural models, diagrams, archival photographs, and stunning pictures of Yugoslav brutalist architecture taken by Valentin Jeck. 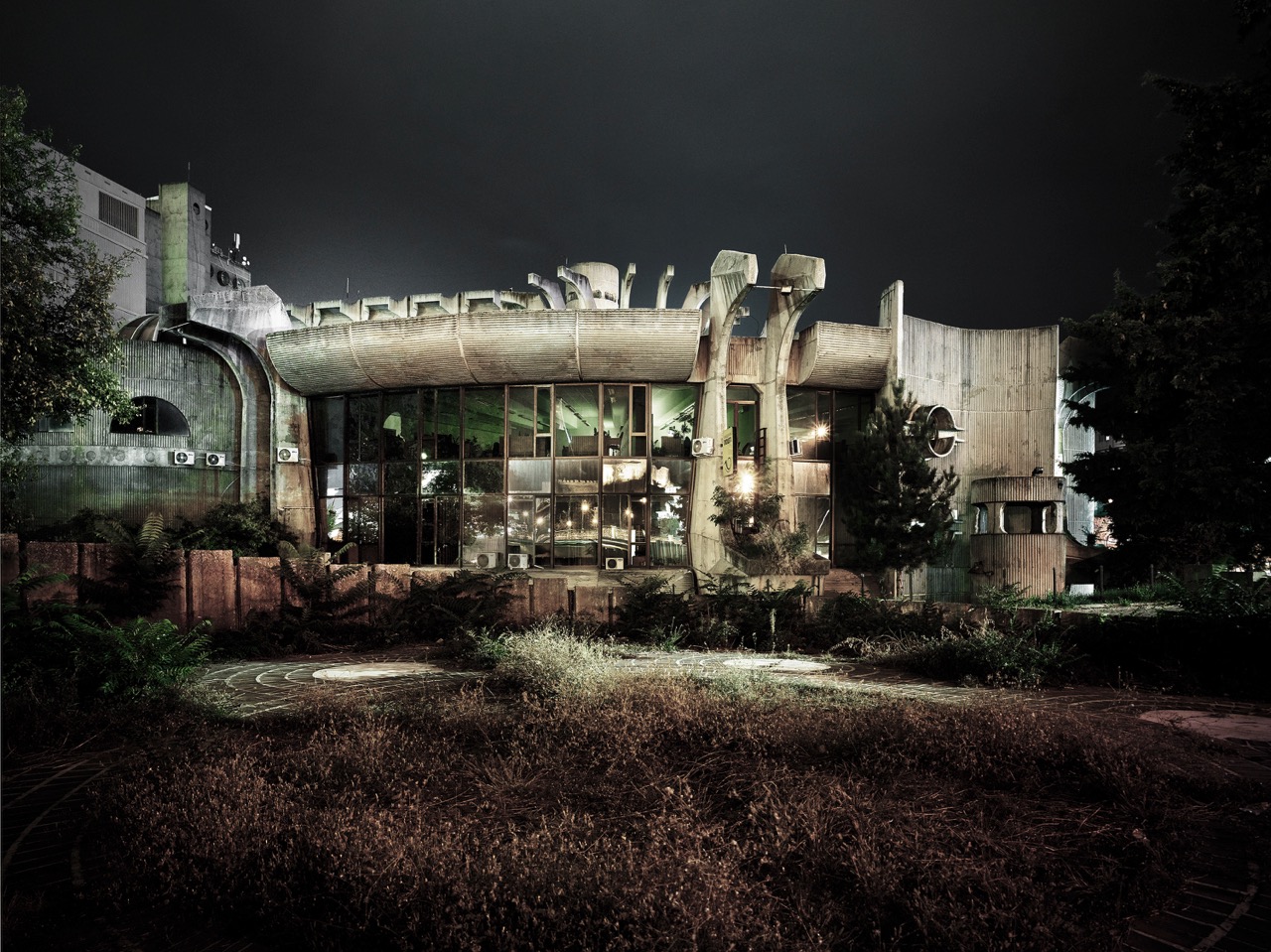 Visually, Jeck’s photos dominate the exhibit and the catalog, illustrating not only the ingenuity and sophistication of some of these apartment blocks, hotels, offices, and civic spaces, but also the way they have held up (or not) since their construction. The white, Escher-like cubic forms of the Croatian Hotel Adriatic II (designed by architect Branko Žnidarec) seem freshly scrubbed in comparison with the once fanciful, now rusty saucer that is the Telecommunications Center of Skopje (Janko Konstantinov). By turns beautiful and affecting, these pictures bear a marked resemblance to those Instagram and Tumblr accounts dedicated to brutalism, like @socialistmodernism, that rose to popularity a few years ago. Though Martino Stierli, MoMA’s chief curator of architecture and coorganizer of this show, may have been inspired by accounts like @socialistmodernism (he is prominent follower), the exhibit aims to correct the flattening, ahistorical tendencies of social media by presenting these images with ample context. 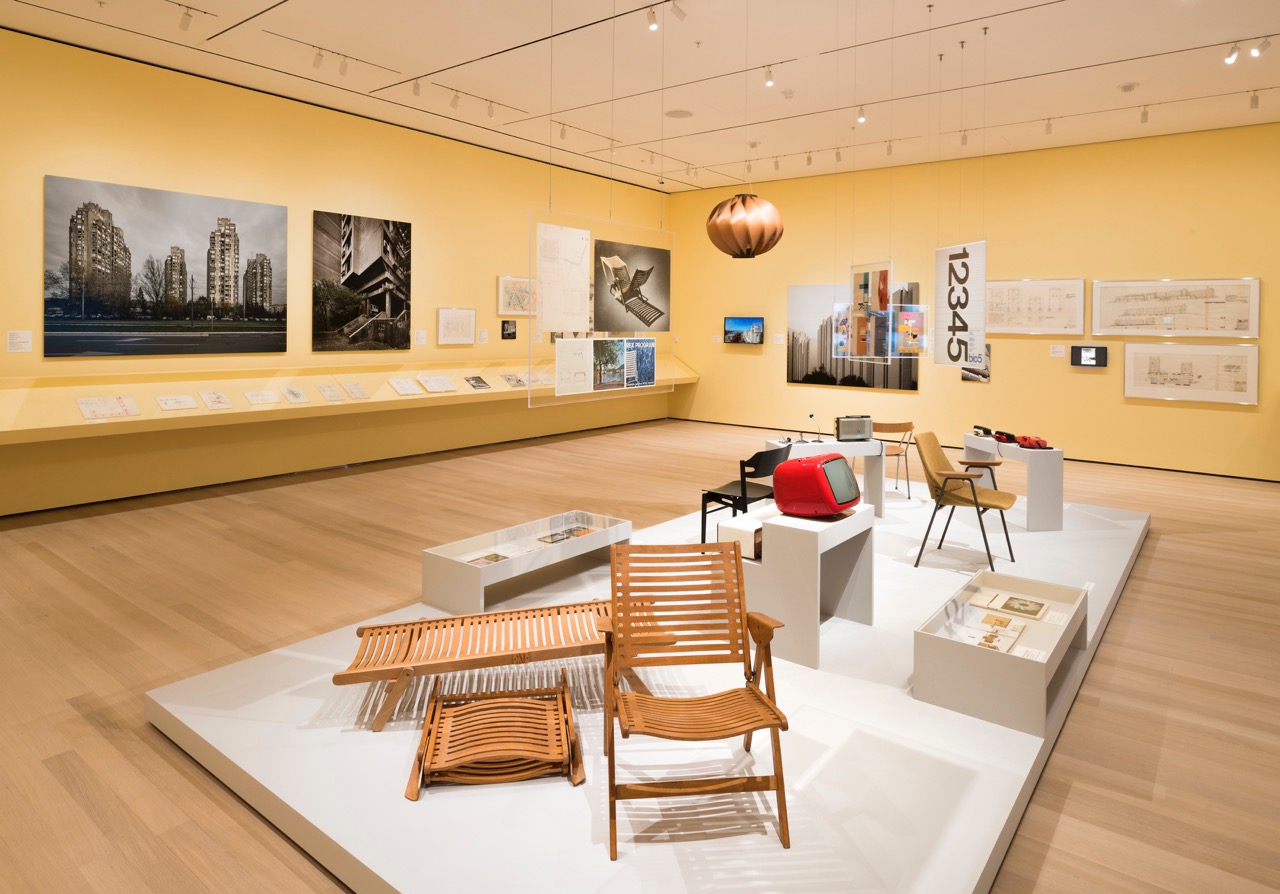 Similar to Jeck’s sometimes picturesque take on brutalism, other portions of the exhibit ride the border between history and nostalgia: a slideshow of tourist snapshots of groovy hotels and sunbathers on the Adriatic coast; a room filled with Yugoslav pop-inspired telephones and Eames-lite chairs; and a grid of tube TVs that loops a video by Turajlić, featuring scenes from Yugoslav movies about apartments. Despite this sheen of romanticism, the curatorial approach offers an important perspective on the architecture, supplementing brutalism with a substantial collection of the period’s visual and material culture. Architecture, after all, is not just about buildings in and of themselves, but also the way we inhabit them. 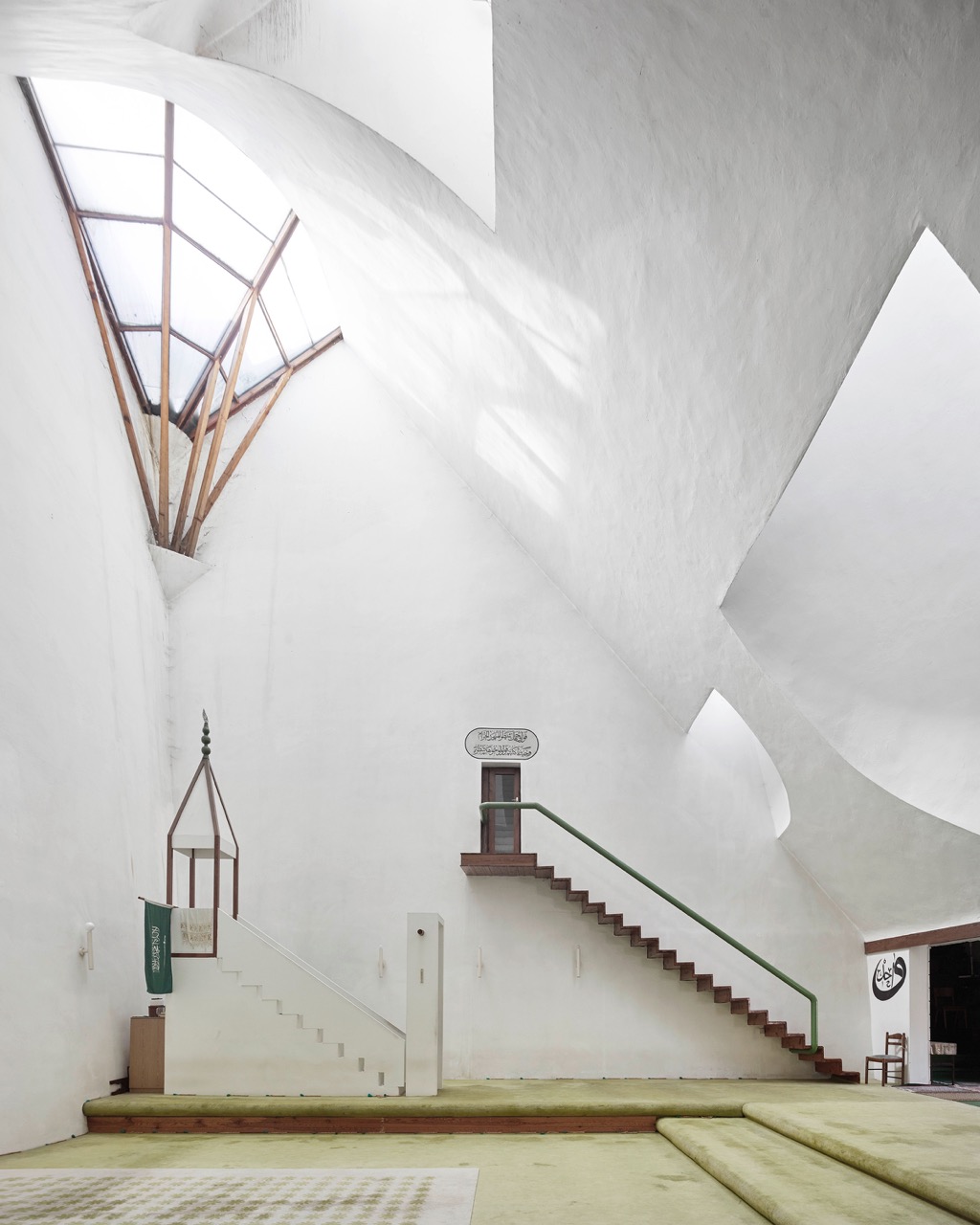 Furthermore, Toward a Concrete Utopia significantly advances the English-language scholarship around this unique architectural period, both in the museum exhibit and in lengthy essays in its accompanying catalog. Among many insightful pieces, highlights include Maroje Mrduljaš examination of architecture’s connection to Yugoslavia’s singular brand of “self-managed” socialism and Łukasz Stanek’s exploration of the state-run Energoprojekt’s activities in Nigeria. Such collaborations between Yugoslavia and “Non-Aligned” partners (a trading bloc of countries who refused to join Soviet or Western spheres of influence) helped export the socialist state’s architectural developments around the globe. However, the central tension of the exhibit is the problem of federalism. How did Yugoslav designers use architecture to engage with the local allegiances of their countrymen while articulating a new national identity? A notable example is Zlatko Ugljen’s Šerefudin White Mosque, located in Visoko, Bosnia, which combines the stark architectural language of brutalism with the traditions of Bosnian Islam. Reminiscent of Le Corbusier’s Notre Dame du Haut, the mosque is painted white and stripped of ornamentation, while five ingeniously cut windows create different lighting effects in the mosque’s interior, corresponding to the five core principles of Islam and the five calls to prayer. Brutalist buildings are often accused of ignoring the context of their settings and alienating their users, but the White Mosque shows how the style can deftly fuse sculptural purity with local culture. 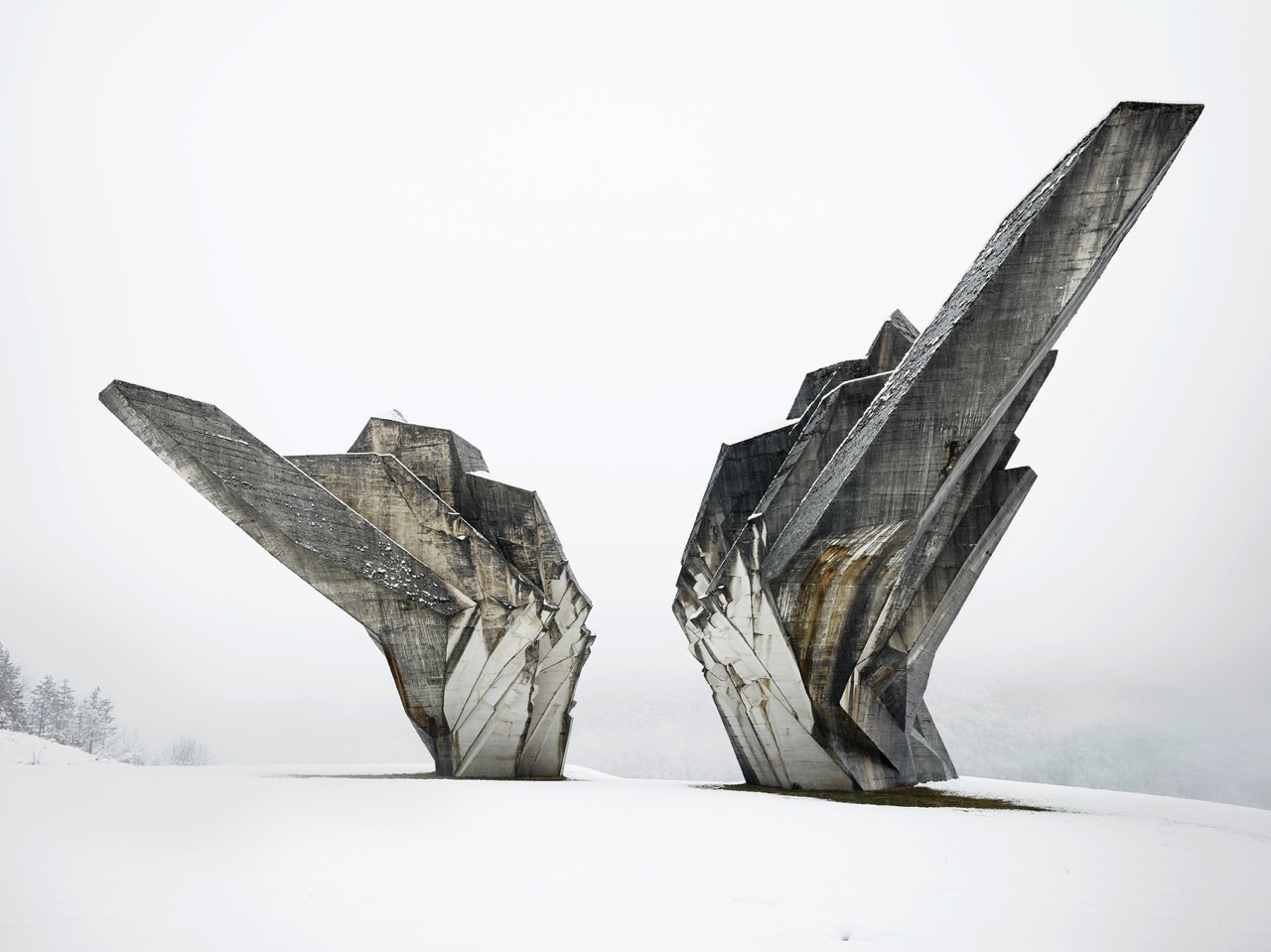 Miodrag Živković, Monument to the Battle of the Sutjeska, 1965–71. Tjentište, Bosnia and Herzegovina. Photo: Valentin Jeck, commissioned by the Museum of Modern Art, 2016.

Though much of the architecture and design documented in Toward a Concrete Utopia leans headlong into the future, the final section of the exhibit returns to the memory of World War II. In the decades after the war, the region’s anti-fascist Partisan forces were honored with dozens of monuments—known as spomenici—built around the country to commemorate battles, massacres, and acts of resistance. Resembling ancient ruins or alien spacecraft, these structures combine architecture, landscape design, and massive public sculpture into inventive new forms. In their artistic ambition and experiential approach to conveying mass death in the modern age, the memorials anticipate contemporary monuments by decades—with marked similarities to Peter Eisenman’s Memorial to the Murdered Jews of Europe in Berlin (2004), and the National Memorial for Peace and Justice, in Montgomery, Alabama (2018), which remembers thousands of African American victims of lynchings. Jeck’s images of spomenici are some of the most powerful in the exhibit, demonstrating the ways memorials can serve as both sites of healing, and visions for a better world. 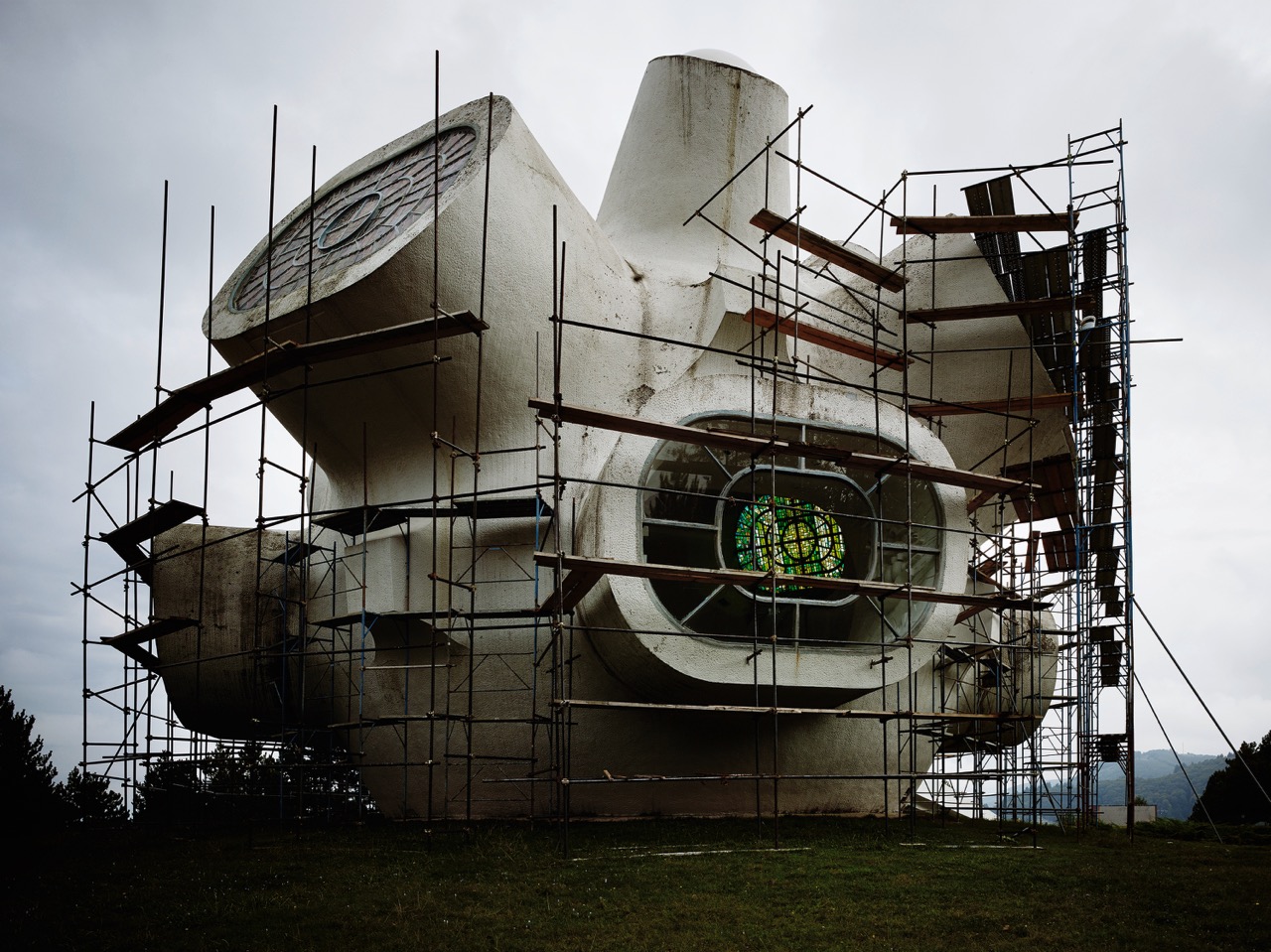 Today, however, many of these anti-fascist monuments have fallen into a state of neglect. Lumped in with the now-tainted socialist government that made them, some appear vandalized by local graffiti artists while others have been lost entirely—razed by right-wing groups, or destroyed during the wars that tore apart Yugoslavia. Remaining monuments have been kept up by some preservation-minded citizens or left to the elements, seemingly forgotten. Yet their message bears repeating; amid a period of renewed fascist and far-right strength in Europe and America, we should all take a moment to remember that Yugoslavia’s anti-fascist spomenici are not merely curious artifacts, but testaments to a history that every day seems closer to our present.

Daniel Penny is a critic and journalist with an MFA in creative nonfiction from Columbia University. His writing has appeared in the New Yorker, Boston Review, the Paris Review, the New Republic, the New Inquiry, and others. He teaches writing at Parsons and Columbia. You can follow him @dwpenny.