Literature
The Books of Jacob

On language and ways of looking: all is not what it seems in
Olga Tokarczuk’s newly translated epic novel. 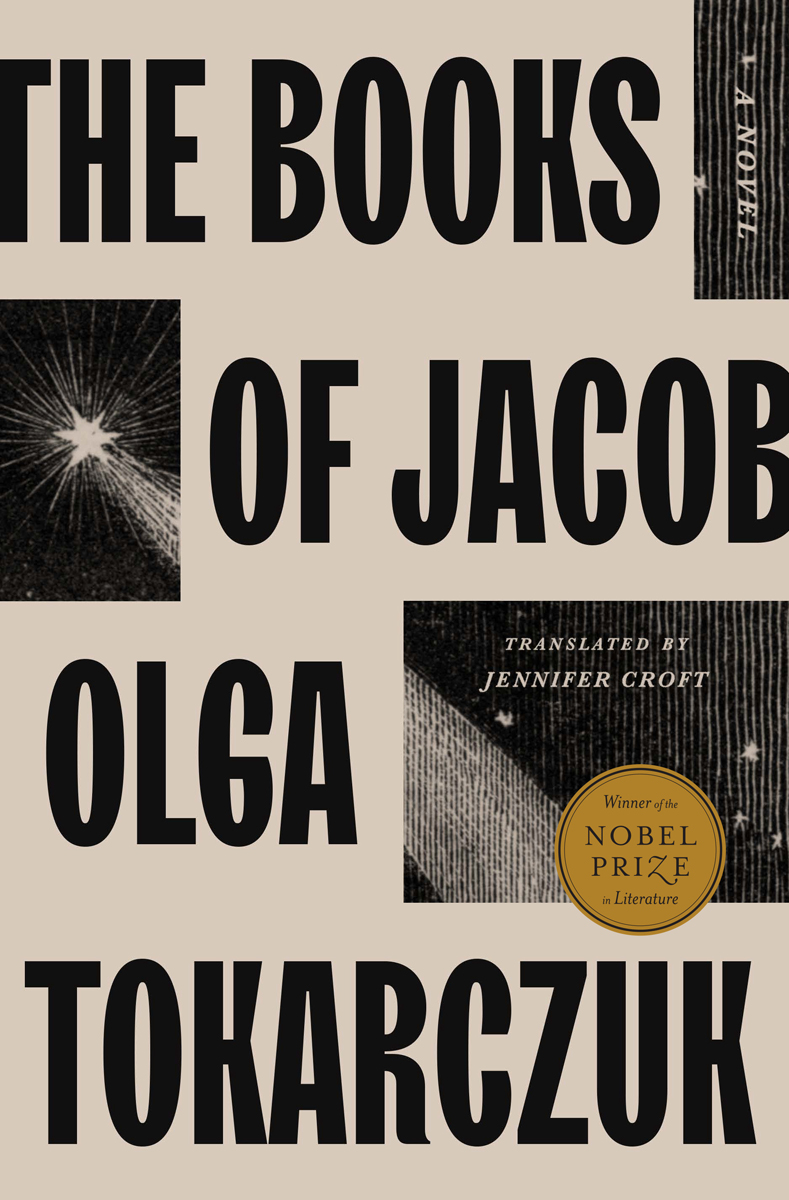 A breathtaking gale of languages, alive and dead, gusts throughout Olga Tokarczuk’s The Books of Jacob, first published in Poland in 2014 and now finally available in the US. Jennifer Croft’s dazzling translation of this staggering, thousand-page metatextual novel, with its symphonic composition of linguistic registers, into the confines of English is a superhuman feat. The Books of Jacob is in some ways about the infinite possibilities of language itself—how words can make worlds, and also violently undo them—but at the level of plot, it is, in the simplest, most reductive explanation, a fictionalized account of a real man, Jakub Leybowicz, alias Jacob Frank, around whom was built an occultist sect of Judaism. It follows the charismatic leader and his flock, their enemies and benefactors, and sundry other characters in their orbit as they rove through a politically and culturally shapeshifting Central-East Europe in search of salvation during the apocalyptic second half of the eighteenth century. The Frankists, a polyglottal lot from the territories that are now Poland, Romania, Hungary, Turkey, and the surrounds, follow their Messiah through his brief conversion to Islam and then more emphatic conversion to Catholicism, which leads to the mass baptism of thousands of Jews in Poland.

Tokarczuk is best-known in the English-speaking world for her novel Flights (published in Polish in 2007, and in English in 2017), which won her, and Croft, the 2018 Man Booker International Prize. Its Polish title is Bieguni, the name of a sect of “Old Believers” who professed that salvation lay in constant motion. Motion is perpetual, too, in The Books of Jacob, and some of that earlier novel’s references, images, characters, and aleatory, mosaicked style have made their way into this one.

If Tokarczuk wrote Flights during a period of compulsive wanderlust, when she peered down at the world from airplane windows, she wrote Books of Jacob during a period of staying at home. She had developed a fear of flying, so now she traveled instead through time, espying a lost world remembered from old maps and engravings lying on her desk (or laptop screen). This is perhaps why a bird’s-eye perspective is so often given of each new town Jacob’s motley crew arrives in during their peregrinations. But also, it’s a novel motivated by the perils of trusting too much in any one perspective (especially your own), and Tokarczuk offers a dizzying array of ways of looking at things. It’s no accident that one character in her vast tract, Asher Rubin, becomes an oculist; or that the camera lucida is “invented” twice by other characters. Everyone here is always struggling to see, and to see otherwise, and to figure out how to language that vision to others.

But it’s difficult to discern anything at all when the book begins, in the forsaken village of Rohatyn. This is a stabbingly cold and tenebristic place, where oil lamps send flickering gleams into people’s eyes and cast luxurious velvety shadows in which secrets curl and linger. We are introduced to its denizens by a text collaged from letters, official edicts, travel documents, diaries, and pieces of poems and prayers, all pasted together by a mysterious omniscient third-person voice. The book is divided into six parts, further split into chapters and subchapters, each section narrated from the perspective of another character (though never that of Jacob, the book’s blurry, unknowable north star). The initially impersonal narrator grows strangely fidgety as the novel progresses, commenting wryly on the other characters and their habits, sometimes dramatically undercutting them, revealing two-thirds of the way in how they’re not to be relied on. (We don’t find out for sure who this occasionally restive presence is until the very last page.)

An epic journey of adventures over prodigious terrains takes Jacob et al. progressively away from the dark, muddy, kabbalistic, and terrestrial, until they end up in the diametric opposite: the bright, wealthy, mechanized West. In the last pages, we’re in the 1790s, and the oculist Rubin and his wife amuse themselves in a well-lit Vienna café by drafting letters to a newspaper answering the question of what the Enlightenment might be. The wife, Gitla, notes that the more radiant the light, the more profound the shadow it creates. The fundamental spiritual search of the Frankists had been for the godly shards of light scattered in the darkness of existence—but the flattening fluorescence of Enlightened reason will obscure any such divine luster.

In this world of uncertain illumination, everything looks, and acts, like something else. It feels like hardly a noun is offered that isn’t followed by “like” or “as if,” and this figurative language enacts the novel’s thesis that nothing is what it seems: reality itself is constituted of all those different faulty perspectives as they exist in relation to one another. (Even so seemingly “true” a thing as a person’s identity is really no more than a light spring jacket that’s easily taken off when the sun comes out.) All this simile and metaphor and subjunctive mood also gives this world its bloody animist pulse—wettened leaves fly like bats, fog is as thick as sour cream, shadows have substance and soul. Elements of weather become sentient and portentous, animals and plants (dozens of species are named) become dealers in human fate (ants, in particular); and there is an interspecies comingling, as humans are almost always given an animalish description, likened to wolves or lions or mules or does. The charismatic Jacob is repeatedly figured as various kinds of birds; and during those chapters when belief is at its zenith, his presence can occasion a miraculous snowing of feathers (later, when his powers of persuasion ebb and his body becomes frail, the feathers are still there, but have been demoted, now unmiraculously decorating hats).

The only character who can truly apprehend this shiftiness of matter is Yente—Jacob’s grandmother, with whom the novel begins and ends, and who peekaboos in and out of the book with her all-seeing gaze. For Yente has been granted the alchemical vision of the dead—sort of. On the cusp of death, she swallowed an amulet bearing the Hebrew word for “wait” (the book’s watchword)—and it has allowed her soul to wander endlessly, observing the world from above even as her body down below shrinks and shrinks, a body her family abandons in a cave, where it turns into a crystal.

When Tokarczuk was awarded the Nobel Prize for literature nearly three years ago, the committee commended the author for her “narrative imagination that with encyclopedic passion represents the crossing of boundaries as a form of life.” If nothing can truly be known in The Books of Jacob, the alternative Tokarczuk advances is that we can try to understand better—by ceaselessly crossing the border, being other in the world, never taking refuge in the comfort of still familiarity. Stasis is inimical to the kind of understanding that is necessary for life to flourish; in stasis breeds the terminal germs of fascism, which thrive in the lie that there is such a thing as an unchanging truth. There is melancholy in her uprootedness, of course; in feeling yourself foreign. There’s a keening songbird of a word for this feeling, tęsknota, which appears in the Polish version of the novel. You can’t suffer its bruise in English translation; words like longing or missing don’t contain the same ache of distance. It’s what happens to your heart when you feel your own language break in your mouth. For Tokarczuk, though, it’s a condition of being human—it’s the soul-pain of freedom.