Dandy, dinner, and Dorian Gray: the artist takes over a Chicago mansion. 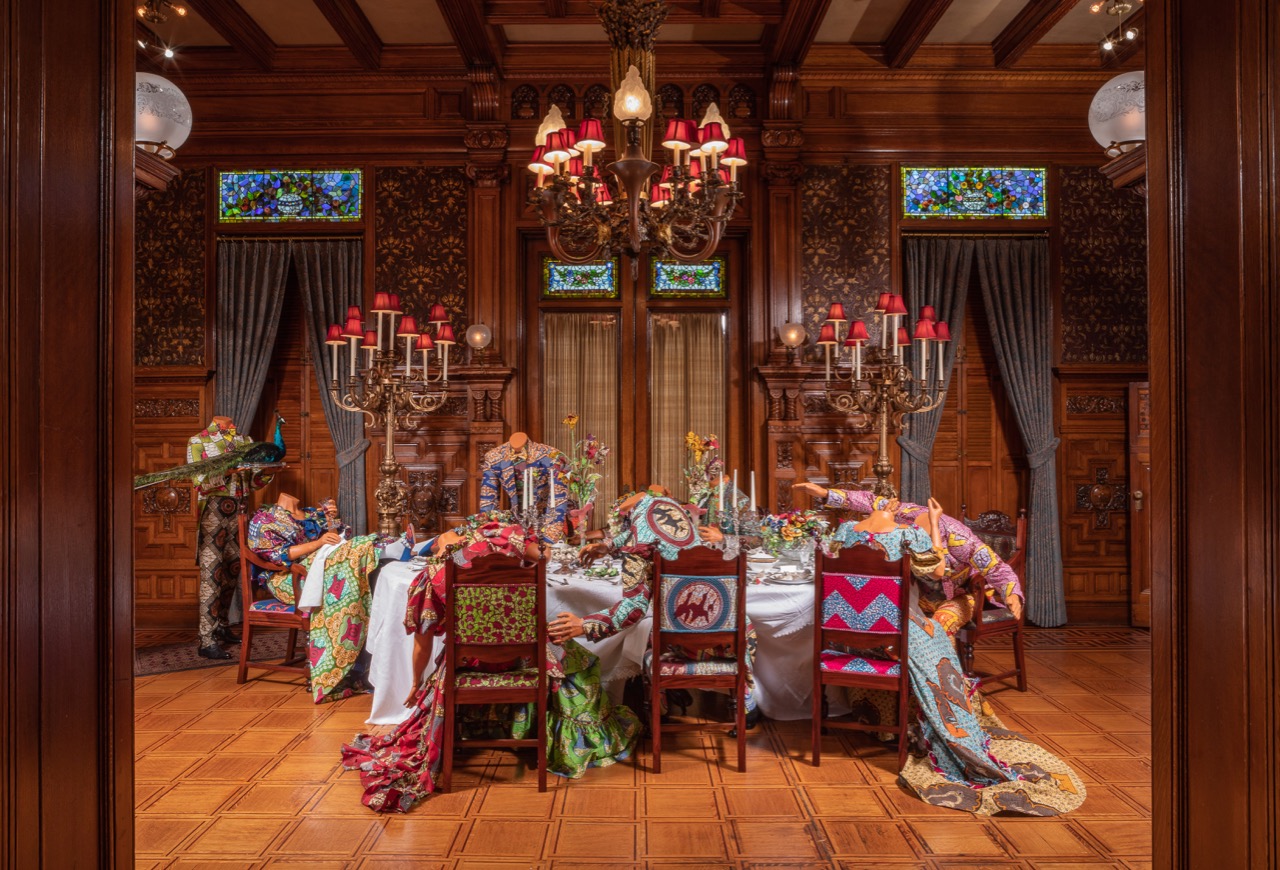 Could there be more perfect work than Yinka Shonibare’s to inaugurate the Richard H. Driehaus Museum’s foray into contemporary art? The fifty-six-year-old British-Nigerian artist, famed for dressing up headless mannequins in Victorian costumes cut from vibrant African-print fabrics, will likely be better known to readers of 4Columns than the Driehaus, a palatial house museum dedicated to Gilded Age decorative arts. Yet they make a splendid pair, Shonibare’s dandified figures as overdressed in their layers of riotously patterned spats and bustles as is the house itself, with barely a square inch left unadorned by Tiffany glass or inlaid wood.

Consider the home’s gallery, where Shonibare’s Big Boy (2002) stands arms open and best foot forward amid the marble columns, burnished bookcases, and Grecian statuettes. Measuring seven feet from beheaded neck to leather-shod toe, he looks the perfect host for the Marble Palace, as the mansion was nicknamed after its completion in 1883, when the Nickerson family used its banking fortune to build what was then one of the largest private residences in Chicago. Enter the dining room, where Shonibare’s Party Time: Re-imagine America (2009) enlivens the typically staid atmosphere of a historical house museum. Originally commissioned by the Newark Museum for Ballantine House, an 1885 structure built for a beer magnate, Shonibare’s raucous dinner party, complete with liveried servant and eight drunken guests gathered at a table spilling with oysters and wine, feels just right here, surrounded by elaborately carved oak walls and art nouveau cameo vases. Even the two large-format photographic series on display in the upstairs bedrooms—a 1998 retelling of William Hogarth’s A Rake’s Progress and a 2001 staging of Oscar Wilde’s Dorian Gray story, both starring Shonibare—fit in, if not like the mise-en-scènes downstairs then as pictorial representations of the daily lives of the upper crust in Victorian England. 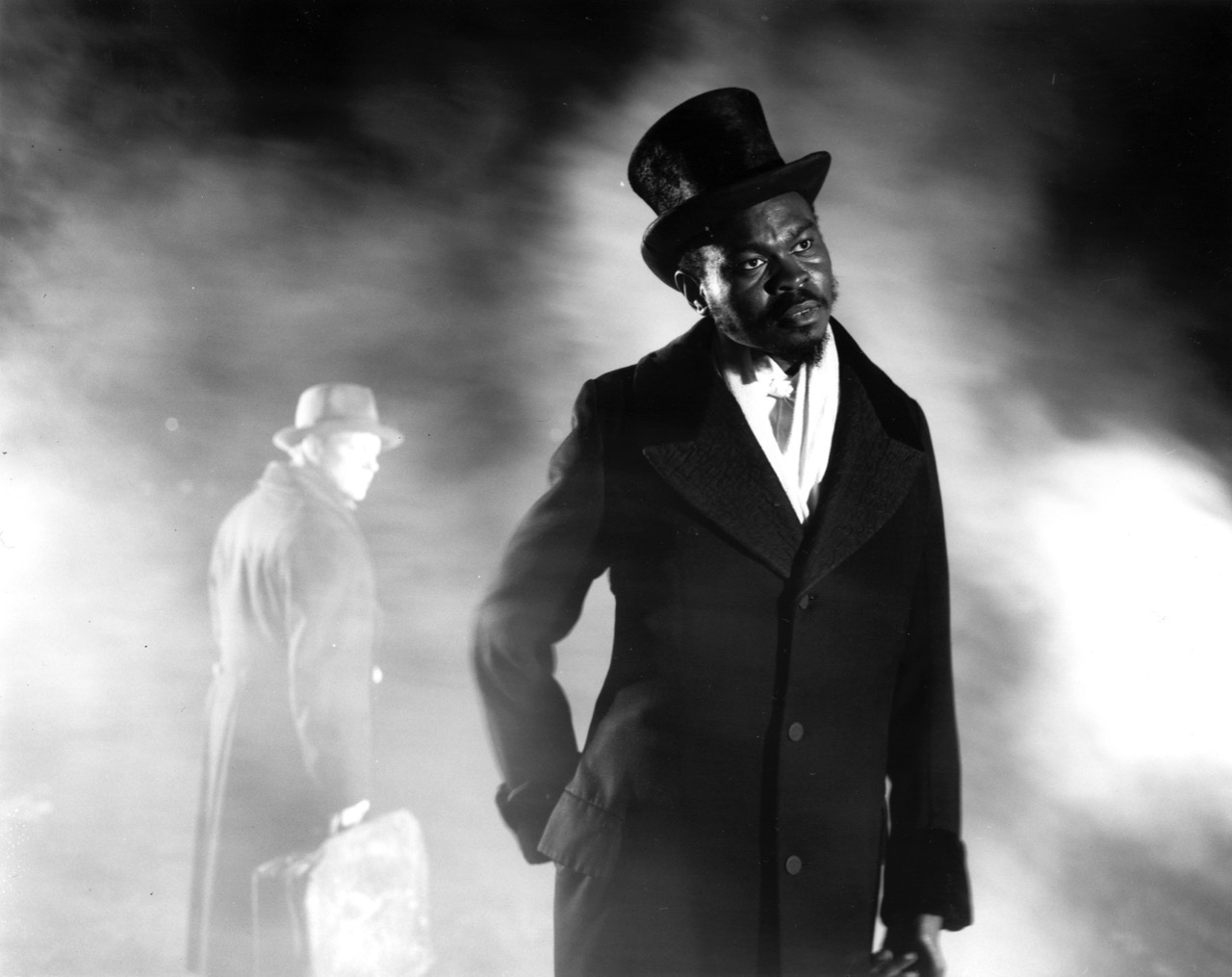 Everything is not entirely harmonious, however, and the dissonant chords are worth discerning—they are the sounds of Shonibare’s critique. Some are ubiquitous in his oeuvre, some unique to its installation at the Driehaus. Destabilizing established historical narratives has long been a hallmark, principally achieved via the artist’s use of fabric that seems African but in fact has a far more mixed lineage: the printed cotton textiles were first manufactured in the Netherlands in the late nineteenth-century to sell in Indonesian markets as an efficient alternative to the local batik technique. When industrial imperfections led Indonesian consumers to reject the Dutch goods, they were successfully diverted to the colonies of West Africa, later undergoing reappropriation by the Pan-African movement as symbols of native cultural identity. Since the mid-1990s, Shonibare has been buying bolts of the stuff at Brixton Market in South London and using it to jarringly rework historical European fashion, home décor, and fine arts. Sampling proves multidirectional, not just the one-way practice so familiar from orientalism and cubism. It’s almost as if Nigeria had colonized England or, in the case of the Driehaus, America instead of the other way around. 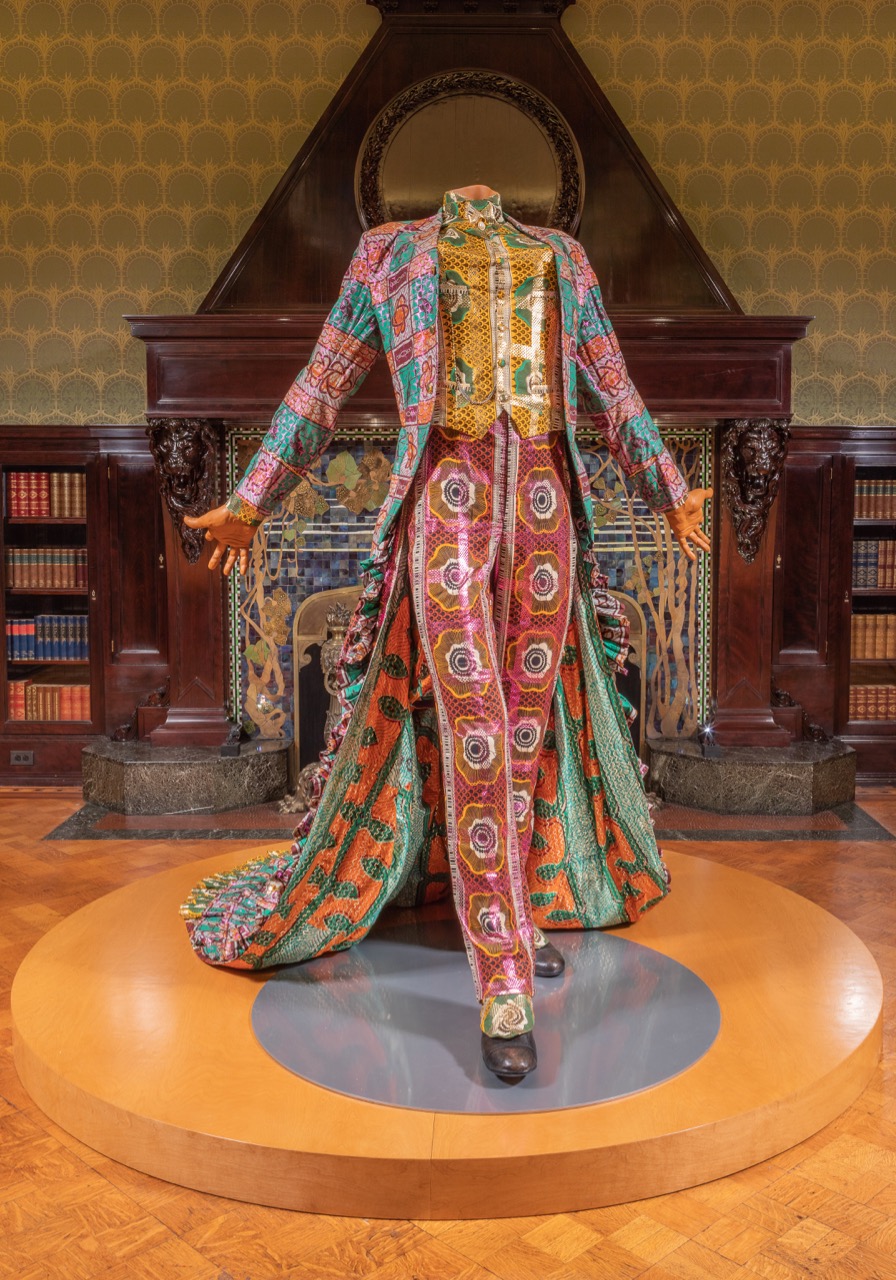 It goes without saying that all the first-class people pictured in the nineteenth-century art and artifacts that adorn the Driehaus’s walls—even the ones sculpted in patinated bronze—are white, as were the Nickersons, as would have been all of the guests who attended their celebrated soirées. White, and in most cases also wealthy, able-bodied, and gender normative. Not so the figures represented by Shonibare. Beyond the suggestion of African bodies that results from the material, if not the cut, of their garments, the mannequins themselves are neither black nor white, though by the one-drop rule practiced in turn-of-the-century America, their caramel skin would have been considered black enough. Big Boy, though ostensibly male, layers his tailored trousers and waistcoat with a bustle and a ruffled floor-length train, un-corseted breasts poking from his thrust-out chest. In Diary of a Victorian Dandy, the Hogarth remake, one of the dandy’s companions is a woman in drag, her muttonchops stuck on with glue. Shonibare, as dandy and as Dorian Gray, is obviously black and also subtly disabled, the result of residual paralysis due to his contraction of transverse myelitis as a teenager. Clearly, none of these folks would have got past the front door of Forty East Erie Street. 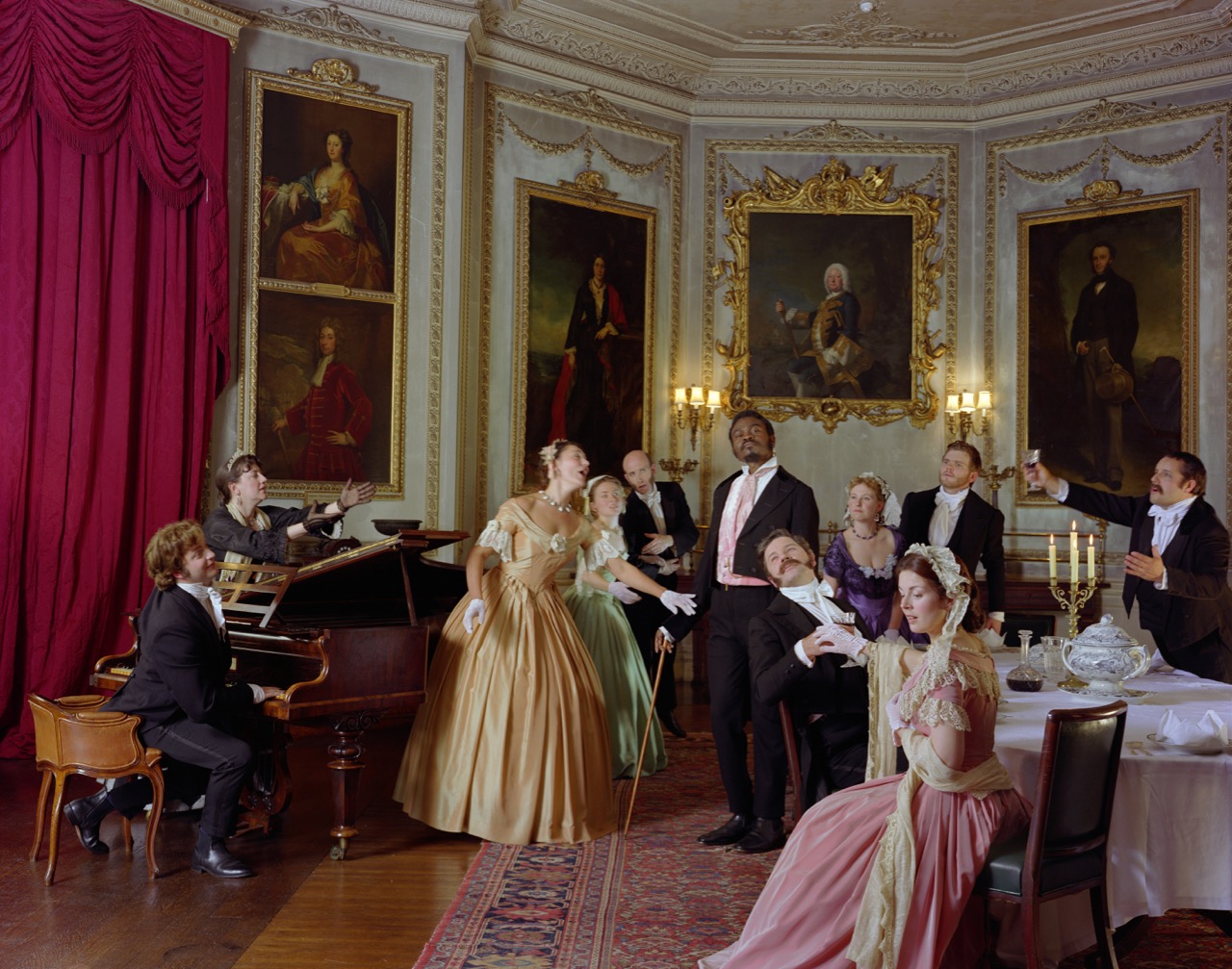 A well-preserved mansion like the Driehaus is first and foremost a celebration of the refined taste of its historical occupants, and an acceptance of the extreme wealth that made such lives possible. Shonibare’s fictions have far more bite in these settings than in conventional galleries. In their clashing colors and patterns, the African-print costumes are over the top—but are they really any more ostentatious than the Marble Palace itself? The headlessness of the mannequins could be just a window-dummy convention, but a nod to the guillotine deaths of aristocrats during the French revolution feels germane. Are more on their way today, an era in which the homes of the wealthy cost exponentially more than the 11 million dollars (accounting for inflation) spent by the Nickersons? Also on view is Upstairs, Downstairs (1997), a set of acid-colored Limoges plates, hand-painted with flowers and the names of the ratcatcher, laundress, and a dozen other long-departed servants of Croxteth Hall, a county estate in Liverpool. Who ran the downstairs in the Nickerson mansion? Who runs it in the various households of Mr. Driehaus, the museum’s billionaire benefactor? 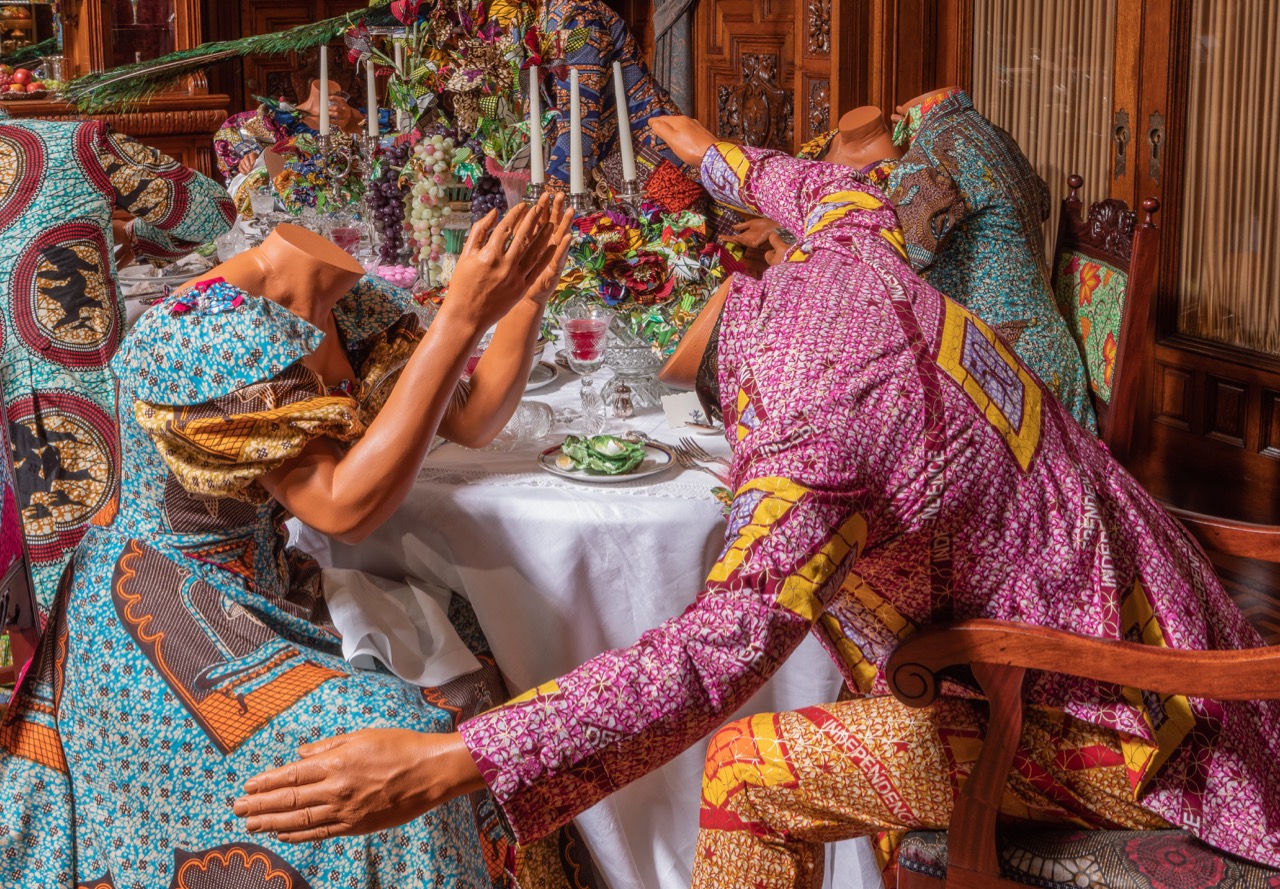 The inequalities of the past or the far away are often more comfortable to redress than those of the present or nearby. But the art world has again and again proved itself capable of magnanimously accommodating critique, even of the very structures of wealth and privilege that keep its enterprise in place, so long as those issues come in the right package. One hopes the Driehaus Contemporary Art Series will do more. With Shonibare, they are off to a good start. The artist, who has been awarded a CBE (Commander of the Most Excellent Order of the British Empire), and who is also a Royal Academician, might seem to epitomize this defanged critique, but he’s more of a canny trickster. “I am here to protest,” he once noted, “but I am going to do it like a gentleman. It is going to look very nice. You are not even going to realize that I am protesting, you are going to invite me to your museum because the work is nice, and then when I am inside it is too late.” In addition to making such deft curatorial choices, perhaps the Driehaus will go one step further and prominently display hard facts rather than just the abstract language of the current exhibition didactics to describe the actual disparities of the Gilded Age, as well as those of the present day.